A 103-year old hunter from Virginia just took down an 8-point buck, the biggest kill of his hunting career, after climbing into a tree stand waiting for the deer to come along.

His name is Clyde Roberts and his friends and family having nothing but praise for the century old hunter.

(Photo from ADB Photography in Lynchburg)

Liberty Alliance’s own CEO, Jared Vallorani, has some personal knowledge about Clyde and his family and he believes it’s proof of the man’s moral character.

“I moved back to Lynchburg, VA in June of 2015 and one of the first people I met was Christin Roberts Elliott and her sons, Logan and Jack. Last year, I saw her post a picture of her then 102-year-old grandfather, Clyde, with a deer he had shot. I couldn’t believe my eyes! A 102-year-old-man not only still active, but hunting? I honestly didn’t think that was possible. Then again this year, Mr. Clyde Roberts took the biggest buck of his lifetime at 103. His granddaughter Christin was with him on this particular hunt.”

This isn’t the first time that Mr. Roberts has taken down such a big prize, the last time he did it was shortly after he’d hit the century mark.

Even House Speaker Paul Ryan (R-WI) has heard of Mr. Roberts and recently penned a note of congratulations for the Virginian.

Article reposted with permission from Constitution.com. Article by Onan Coca.

Police Chief Wants You To Turn In Gun Enthusiasts: “We Might Want To Vet These People”

Foul-Mouthed, Gun-Confiscation-Promoting David Hogg Promotes What Is Unconstitutional In Connecticut 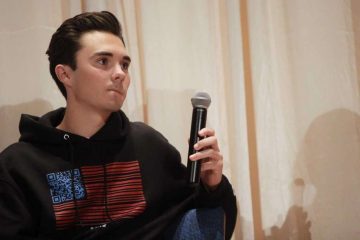