Gun owners are accustomed to legalized discrimination. In some states, merchants still hang signs refusing to do business with us. We’re used and abused by big Hollywood. We’re outcasts in academia. Much of the mainstream media refuses to treat us fairly. Some government officials desperately want to take away our freedom. Even a few major corporations have openly called for more restrictions on us.

So when the website AR15.com was suddenly kicked out by its web registrar GoDaddy, who claimed their content “both promotes and encourages violence,” it was hard to be surprised. The thing is, gun owners are often told that, if they want a place to discuss guns, they must build their own websites, but now they must also have web registars that don’t object to them.

“It’s an internet forum, so you get a mix of everything,” said Juan Avila, the site’s co-founder and president. “When emotions run high and people say things they shouldn’t, we have rules we follow. Any threats, even veiled, are gone. This was nothing outside the normal. It just seems like they wanted us gone.”

Avila says they quickly switched registrars, but further attempts to get clarification were ignored. “We’re not holding grudges. They wanted us gone, and we’re happy to be gone.”

The move came on the heels of Big Tech companies moving to terminate the social-media site Parler, a small, but quickly growing competitor to Twitter—this, of course, happened just as Twitter had banned outgoing President Donald J. Trump.

Such crackdowns, of course, aren’t new. Hegemonic companies like Google, Facebook and YouTube have engaged in digital discrimination against America’s millions of gun owners for years.

Social Media
Facebook first announced they would begin limiting online gun sales in 2014, claiming they wanted to “balance” user interests. Two years later, they announced a complete ban on selling firearms on their platform. After another two years, the site expanded the ban to include accessories, such as grips, optics, lights, sights and bipods, as well as mace, BB, airsoft, flare guns and tasers. During President Joe Biden’s inauguration, the site even temporarily halted the sale of benign accessories like holsters, vests and safes.

The policy was then extended to its powerful advertising engine, which severely limited the reach of gun stores and Second Amendment groups. Early enforcement often deleted legitimate firearms business pages, as Facebook insider Chuck Rossi acknowledged. Firearms enthusiasts and advocacy groups also found their pages to be the target of mysterious takedowns—some have been permanent. Others reported “shadow bans” in which companies secretly hid content from audiences. Enforcement initially relied on user reports, which led to anti-gun activists patrolling groups and reporting suspected listings. The site now uses paid staffers and artificial intelligence to do this work.

Instagram applied the same policies, and in 2019 began cracking down on firearms “influencers” on the site (many were women), and deplatforming members who promoted firearms-branded content. The policy crippled the reach of gunsmiths, competitive shooters, hunters, instructors and reviewers by denying them opportunities to get firearm-related sponsorships from trusted brands like Smith & Wesson, Glock or Winchester.

Pinterest restricts private and commercial firearms sales—or even the display or encouragement of “dangerous activities.” LinkedIn’s policy forbids “promotion, use or sale of” firearms or ammunition.

Search Engines and Apps
Back in 2012, Google began discriminating against firearms in their shopping search results. Their massive ad engine also banned “dangerous items,” and even banned water guns. Initial efforts led to humorous glitches, such as censoring nail and glue guns, as well as the bands Guns N’ Roses and Sex Pistols; it even blocked words like “burgundy” for containing the letters “G-U-N,” though it failed to catch typo queries like “handgnu.”

Apple also required gaming apps to remove images of guns or violence from promotional materials, but kept the game violence itself.

Remember, this is just the publicly acknowledged censorship. While companies hide underlying data on algorithms, researchers have analyzed millions of searches and discovered a significant left-of-center bias from sites like Google. These claims were confirmed by Google insiders, such as Greg Coppola, who told Project Veritas that algorithms “don’t write themselves. We write them to do what we want them to do.” (Google later suspended Coppola.)

Video Platforms
In 2018, YouTube began cracking down on videos promoting or linking to sellers of guns and accessories. Content creators, such as gunsmiths, saw their content demonetized—since positively reviewing a certain firearm might be considered “promotion”—and their appeals were often ignored. Suddenly de-platformed, some users even resorted to posting their content on adult websites.

Video-chat platforms, like Zoom and Google Meet, whose popularity soared during pandemic lockdowns, ban trade or promotion of firearms or ammunition.

Merchants
Auction sites, such as eBay, banned firearms sales early on, and bloced the sale of accessories in 2007—although, once again, violators consistently circumvented the ban. Resale sites, such as Craigslist, ban firearms listings, as do sites like Etsy and Shopify.

Retail-listing site Foursquare forbids a shop from using their page “primarily or substantially to promote or advertise” firearms and accessories, as well as prohibiting ads for firearms, ammunition or even paintball guns.

Banks and Payment Systems
Mainstream banking companies, such as JP Morgan, Bank of America, Citigroup, Amalgamated Bank and Berkshire, have all made headlines for banning, restricting or putting conditions on gun sales. In theory, smaller platforms are an alternative to enhance the reach of small merchants and consumers. But nearly all digital checkout software (Wix, 2Checkout, Blueplaid, Sailthru, Salesforce and others) refuse to allow firearm transactions.

Other Companies
Rideshare apps like Uber and Lyft have banned carrying of firearms by drivers, passengers or employees, and have even fired drivers who used firearms defensively.

Back in 2013, Comcast announced it would refuse to allow firearms or ammunition ads, once again disadvantaging local gun shops. Time Warner Cable announced they would ban ads with “semiautomatic weapons and guns pointed at people.” Verizon dropped the Outdoor and Sportsman channels, and Sinclair Broadcasting just canceled its Guns Out TV show—for being a gun show.

Companies like Mega, Makerbot and Zoom-owned Keybase have privately banned sharing blueprints for 3D-printed firearm components. Links to sites that haven’t banned them were blocked by Facebook and Instagram, and print editions were removed by Amazon.

Such stories may seem like nothing more than policies from some Left-leaning outlets as they push political correctness, but when you go down the list, as we have here, you can see they amount to systemic discrimination against gun owners.

Movements like this don’t just happen in a vacuum. New York Gov. Andrew Cuomo officially warned banks not to do business with the NRA or similar organizations. The NRA had to sue San Francisco to keep them from blacklisting NRA-affiliated contractors. New York legislators campaigned for a bill requiring police to audit social-media accounts before approving a gun purchase. The New York Times openly called for banks to discriminate against gun owners. Under former President Barack Obama, the FDIC labeled gun retailers “high risk” for credit transactions, and the Justice Department utilized “Operation Choke Point” to heighten scrutiny on bank and lending partnerships with gun companies, which resulted in assets being frozen, accounts being suspended or terminated and regulatory headaches for thousands of merchants.

Whatever the cause, buyers, sellers and owners of guns are in a tight squeeze. They’re blacklisted from search engines, social media, app markets, streaming software, payment systems and other regular channels of commerce. Gun companies and dealers are treated as if they’re making and selling illegal products. Even when these companies retreat to private forums, they’re often pursued and harassed. Gun owners are excluded from ride-share services, video chats or from sharing their hobbies on dating websites. At every turn in an increasingly digital age, gun ownership is ostracized, blackballed and banished.

So what’s the solution? The First Amendment restricts only government limits on free speech. Private companies can (and should) have liberty to conduct their affairs. But Big Tech has enjoyed specific legal exemptions, billions in government subsidies, a revolving door of lobbyists and executives between Washington, D.C., and Silicon Valley and, according to a congressional report, an unethical dominance of the marketplace that approaches becoming a monopoly.

Freedom of speech isn’t just a procedural formality to constrain government even as government outsources censorship to private-sector companies that side with a certain political party. It’s an enduring principle that all may speak freely and not be silenced as long as they aren’t breaking laws. For humanity to learn and grow, we need a fertile diversity of ideas and a free market to exchange them in.

The good news is, the free market also provides solutions. Alternatives like GunTube, GunBroker, GunTab and GunDynamics have been created. Parler and others are reestablishing themselves. NRAPublications.org, A1F.com, NRAWomen.com and more are still out there telling the truth and giving gun owners the resources they need. New and experienced gun owners can still connect with certified gun trainers via NRAInstructors.org. Citizens can even circumvent Big Tech by going to NRAILA.org/sign-up to be enrolled in email or text NRA Alerts. Also, some politicians in Washington are beginning to question Big Tech’s technocratic, anticompetitive monopoly.

And, through it all, gun sales have never been higher. In that fact rests a final assurance: The Second Amendment still protects the First.

When Rights Are Surrendered

10 Great Defense Loads for the 9 mm 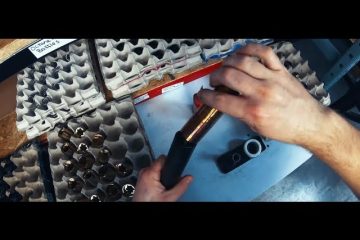