CZ USA announced the release of a new version of its popular Scorpion line of 9 mm Luger chambered large format pistols with the launch of the CZ Scorpion 3+ Micro. This new version of the Scorpion builds off of the previous Scorpion EVO 3, but with several changes and additions that were requested by the American market.

Several aspects of the Scorpion 3+ were improved over the previous iterations, including shape and layout. The upper receiver on the Scorpion 3+ is slimmed down to accommodate more accessory options. This includes a redesigned end cap at the back end, allowing a greater range of aftermarket brace options to be attached. While the Scorpion EVO 3 only had an ambidextrous safety selector, all of the controls, including the magazine and bolt release levers, are completely bilateral on the Scorpion 3+. The paddle-style magazine release of the older Scorpions was dropped in favor of a more familiar AR-style ambidextrous release, making it easier to use for those already familiar to the AR platform. 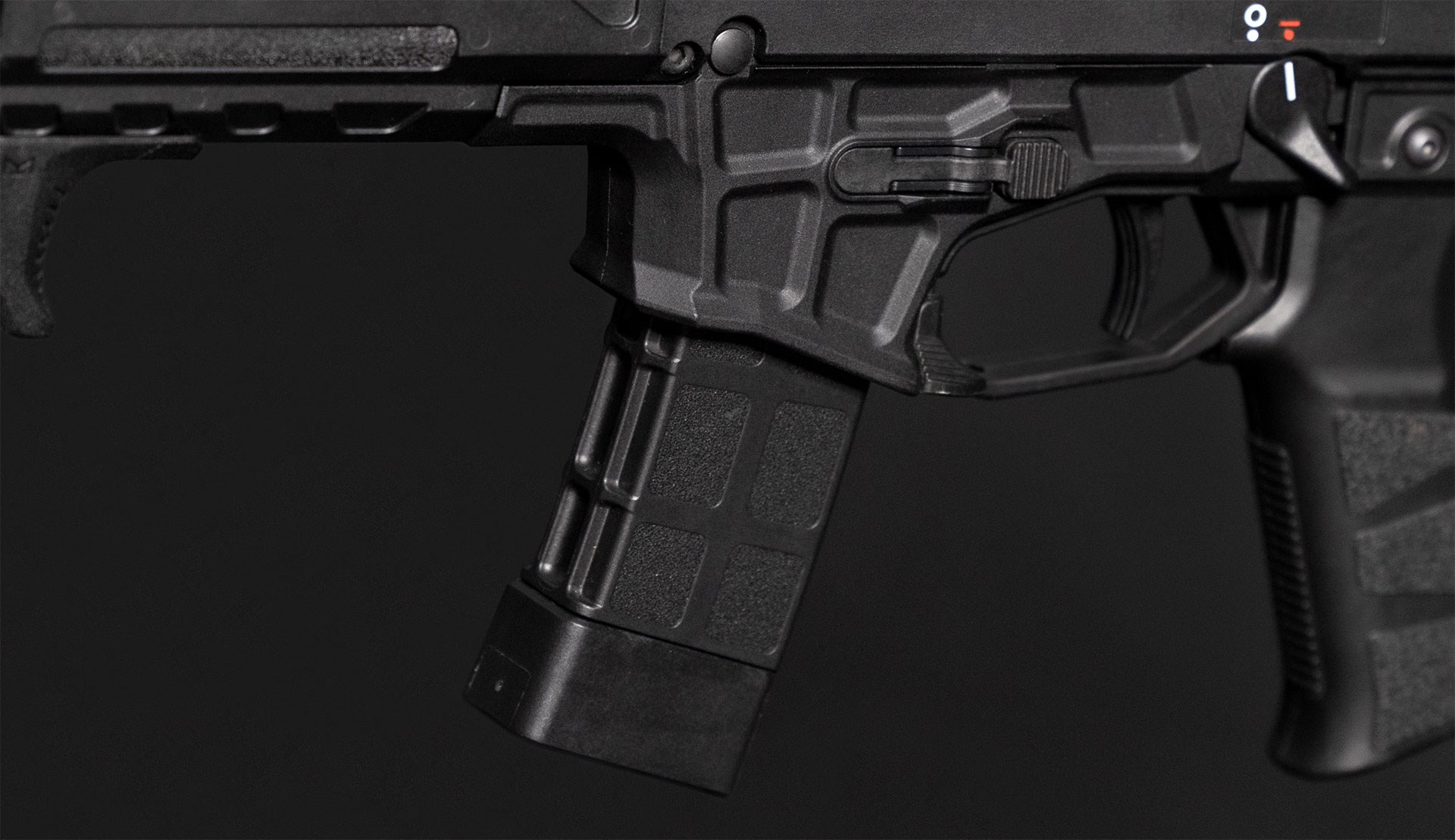 A closer view of the redesigned magazine and ambidextrous controls on the lower receiver of the CZ Scorpion 3+ Micro.

With the redesign of the magazine release, so too were the 20-round, double-stack magazines redesigned to fit the AR-style magazine catch on the Scorpion 3+. These magazines feature recessed texturing for improved grasp, and are also backwards compatible with the previous Scorpion EVO 3s. The magazine well has also been reshaped, allowing for more purchase onto the hand-guard with large and gloved hands. The M-LOK slotted hand-guard on the Scorpion 3+ is also made from polymer, rather than aluminum like with the previous iterations of the Scorpion line, in order to reduce heat transfer from the guard into the hands of the user.

Another aspect changed on the Scorpion 3+ is its pistol grip. While the previous Scorpion EVO 3 had a more traditional grip angle, the Scorpion 3+ includes a grip with a steeper angle, much like the current trend of steep-angled grips found in the AR-market. The steeper angle of the grip offers greater comfort and less wrist exhaustion than the previous grip style. This new grip also includes segments of rough texturing on the sides for added retention. 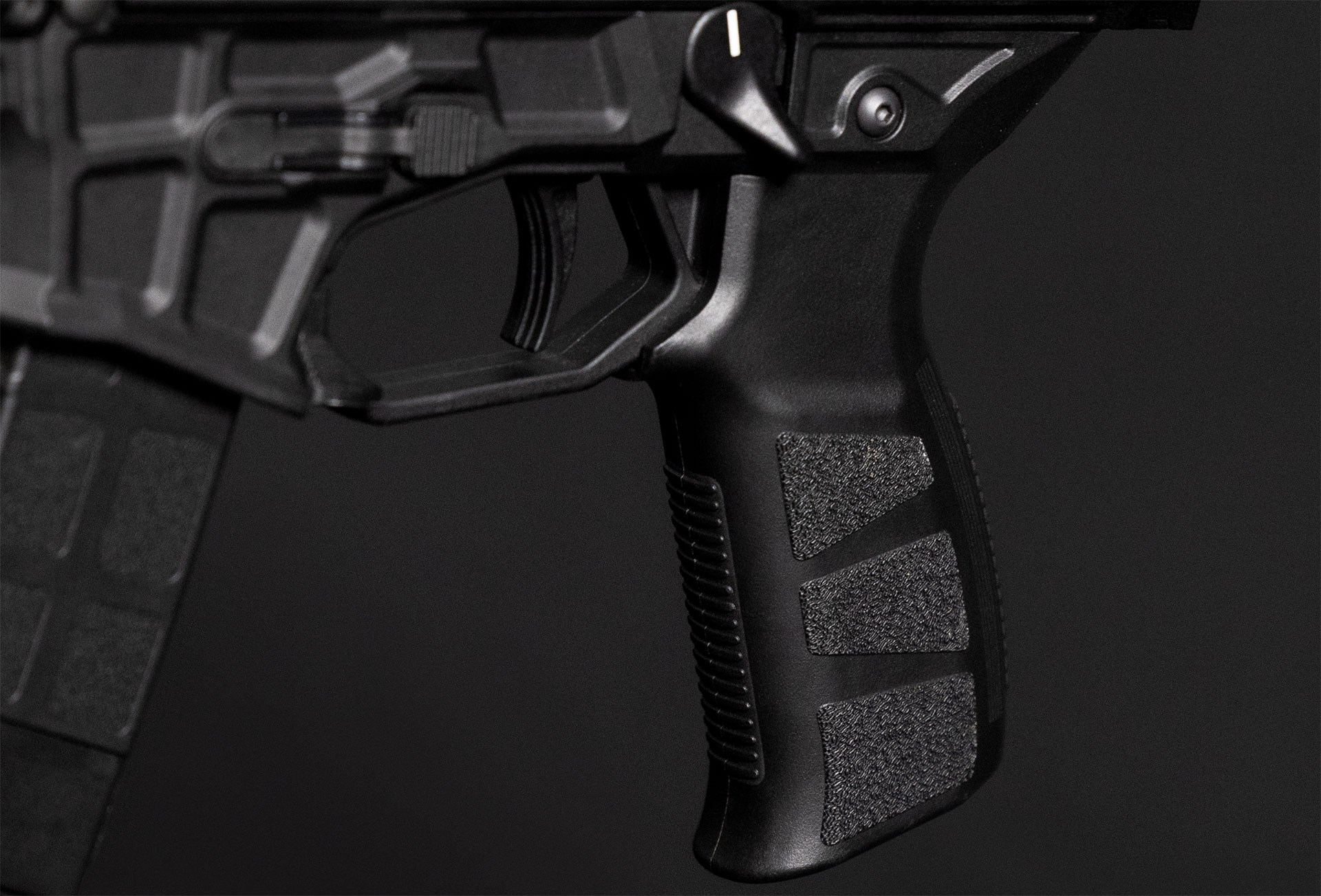 A closer view of the redesigned pistol grip on the Scorpion 3+ Micro, with a more steep grip angle over the Scorpion EVO 3.

On top of the Scorpion 3+ Micro’s receiver, it also comes with a set of redesigned iron sights. Made from aluminum, the rear sight has four adjustable apertures and both the front and the rear sights are updated with a lower one-third co-witness height with most popular red-dot sights on the market, allowing for a less cluttered sight picture. The Scorpion 3+ Micro comes with a 4.2″ cold hammer-forged barrel, which is threaded for 1/2×28″ t.p.i. and has a flash can threaded. The Scorpion 3+ Micro has an overall length of 14.63″, height of 8.9″ and width of 2.4″. Its overall weight is kept down to 4.7 lbs. unloaded, with its upper and lower receiver sections being made largely from fiber-reinforced polymer. It has a suggested retail price of $1,299.

For more information on the new CZ Scorpion 3+ Micro large-format pistol, along with CZ’s other offerings, visit cz-usa.com.

The Economic Impact of Shooting Sports and Recreation