June 30, 2022 Guns In The News
Home»Commentary»Great Guns Of The American West
Commentary

Of the many realms of collecting, firearms rank among the most fascinating. Beyond their utilitarian function, firearms have been admired over the centuries for their intrinsic artistic form and, often, their lavishly applied decoration.

Businessman, engineer and yachtsman William I. Koch—winner of the America’s Cup in 1992—shares and perpetuates the tradition of collecting firearms in tandem with other objects and artwork. 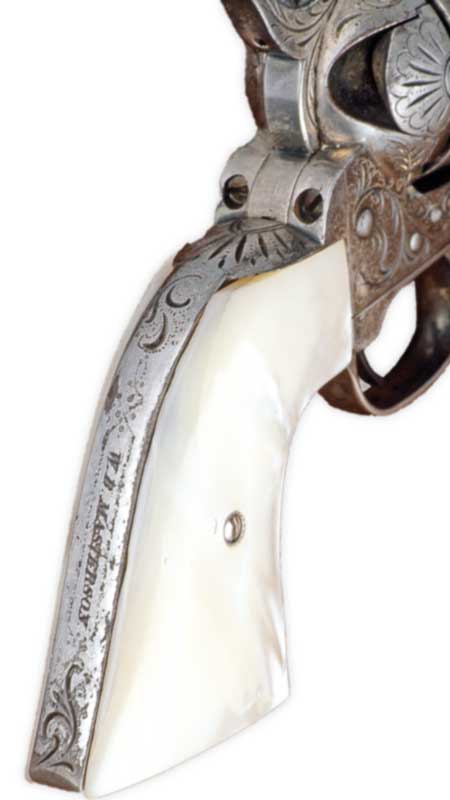 This Single Action Army revolver belonged to W.B. “Bat” Masterson. It was thoroughly engraved and has the inscription “W.B. MASTERSON” on the backstrap.

After many years of hunting the West and following the trails of the Indigenous, mountain men and cowboys, he has collected a raft of artifacts—paintings, sculpture, photographs, Bowie knives, reward posters, 10-gallon hats, tomahawks, lariats and, of course, firearms with direct ties to many of these larger-than-life figures that evoke America’s grand epic, the great West. The following is a glimpse of some of the collection’s more intriguing artifacts.

A revolver known to have consistently served on the side of law and order is the Colt .45 Single Action of W.B. “Bat” Masterson (1853-1921). This is the most historic handgun documented in the Hartford gunmaker’s records of its firearms used in the West. Masterson has been celebrated in fact and legend as a close friend of Wyatt Earp and of other renowned frontier figures, and as a man of innumerable adventures: buffalo hunter, U.S. Army scout, railroader, saloon keeper, policeman, deputy sheriff, sheriff, deputy U.S. Marshal, city marshal, gambler, gunfighter (then known as a “shootist”), newspaperman and journalist.

Masterson’s historic six-shooter was shipped from the Colt factory on Oct. 23, 1879, engraved, inscribed, silver-plated, enameled and with carved mother-of-pearl grips. Manufacture had been made on Masterson’s own order with sale to Wright Beverly Company of Dodge City, Kan., and shipment to Simmons Hardware Co., of St. Louis, Mo. The revolver became Masterson’s constant companion for several years thereafter. 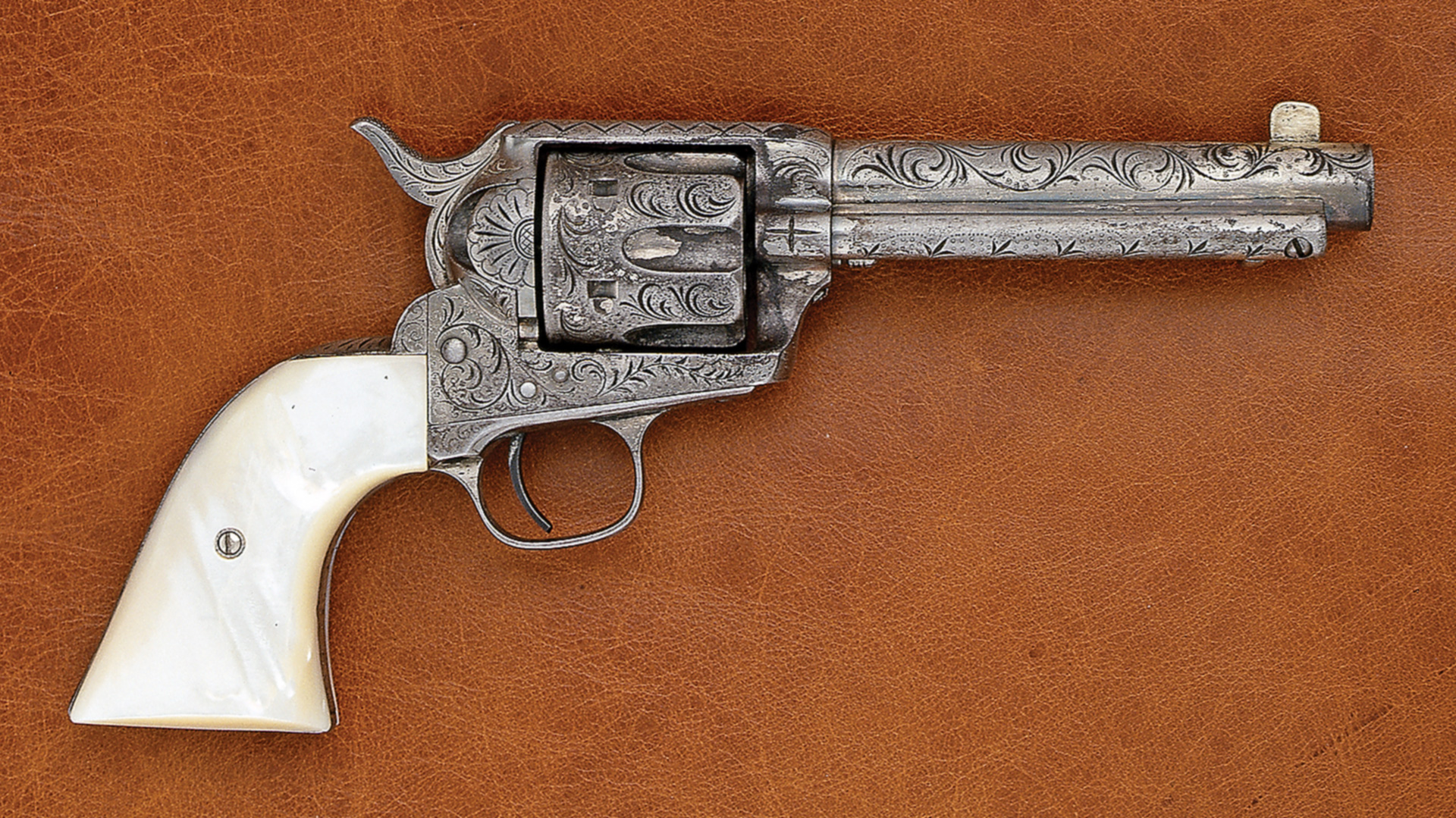 In his later years, Masterson served as U.S. Marshal for the Southern District of New York, an appointment by his friend and admirer President Theodore Roosevelt. Masterson died peacefully at his desk at the Morning Telegraph, a New York City sporting newspaper. He survived all the great frontier heroes, except Wyatt Earp, who died in 1929.

Author and columnist Damon Runyon eulogized Masterson as “one of the most indomitable characters this land has ever seen (and) … a 100-percent, 22-karat real man.” Runyon later drew on his close friend as the colorful character Sky Masterson in the long-running Broadway show and hit film, “Guys and Dolls.” 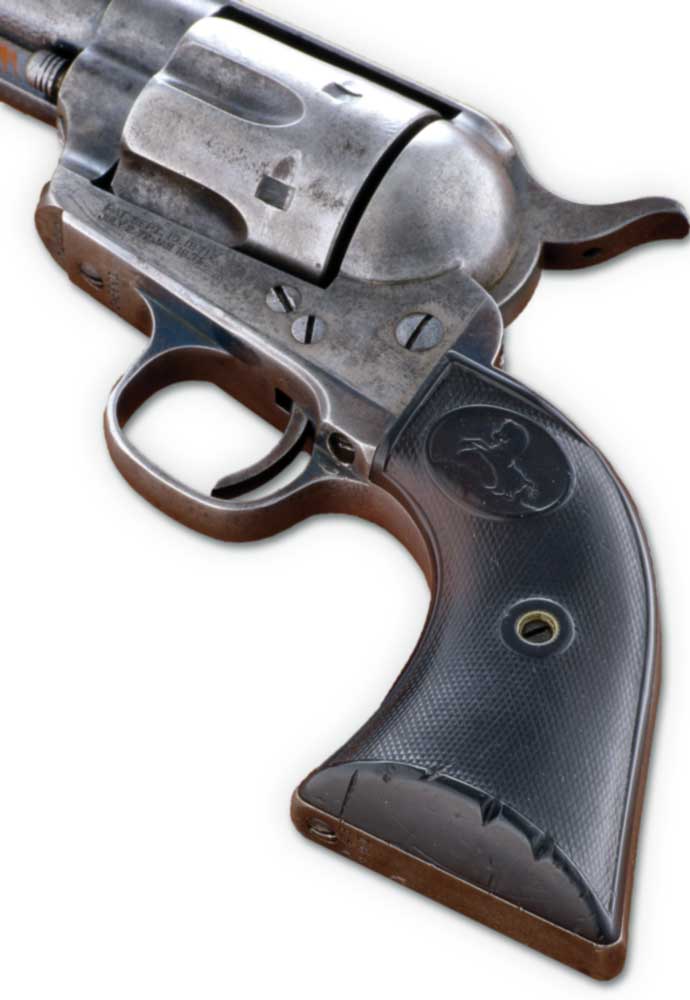 Firearms and Memorabilia of Tom Horn

Tom Horn was born in 1860 to a farm family in Memphis, Mo. He held an assortment of jobs, working as a track layer with the Santa Fe Railroad, a wagon freighter, stagecoach driver, night herder, and, for 10 years, Spanish interpreter and scout for the U.S. Army at the San Carlos, Ariz., Apache reservation. He is credited with playing a major role in the 1886 campaign to capture Geronimo.

When the last of the major Indigenous Wars concluded, Horn sought other lines of employment. In service of the Pinkerton Detective Agency in Denver, from 1890 to 1894, he pursued train and bank robbers in Wyoming and Colorado. Ultimately quitting the Pinkertons (the work was too tame for him), Horn moved on to employment with cattle barons who operated forcefully and without legal niceties in dealing with small ranchers and homesteaders. Horn’scharges included carrying out shootings, as well as hiring and training gunmen.

After a brief interlude as a mule packer for Theodore Roosevelt’s Rough Riders during the Spanish American War, Horn returned to Wyoming and to killing for hire. He was soon in trouble as the prime suspect in the murder of 14-year-old Willie Nickell in an ambush on July 19, 1901. When Horn became intoxicated during the investigation and bragged that the Nickell shooting was his work, he was arrested and charged with first-degree murder. A sensational trial followed, resulting in a guilty verdict and a sentence of death by hanging. 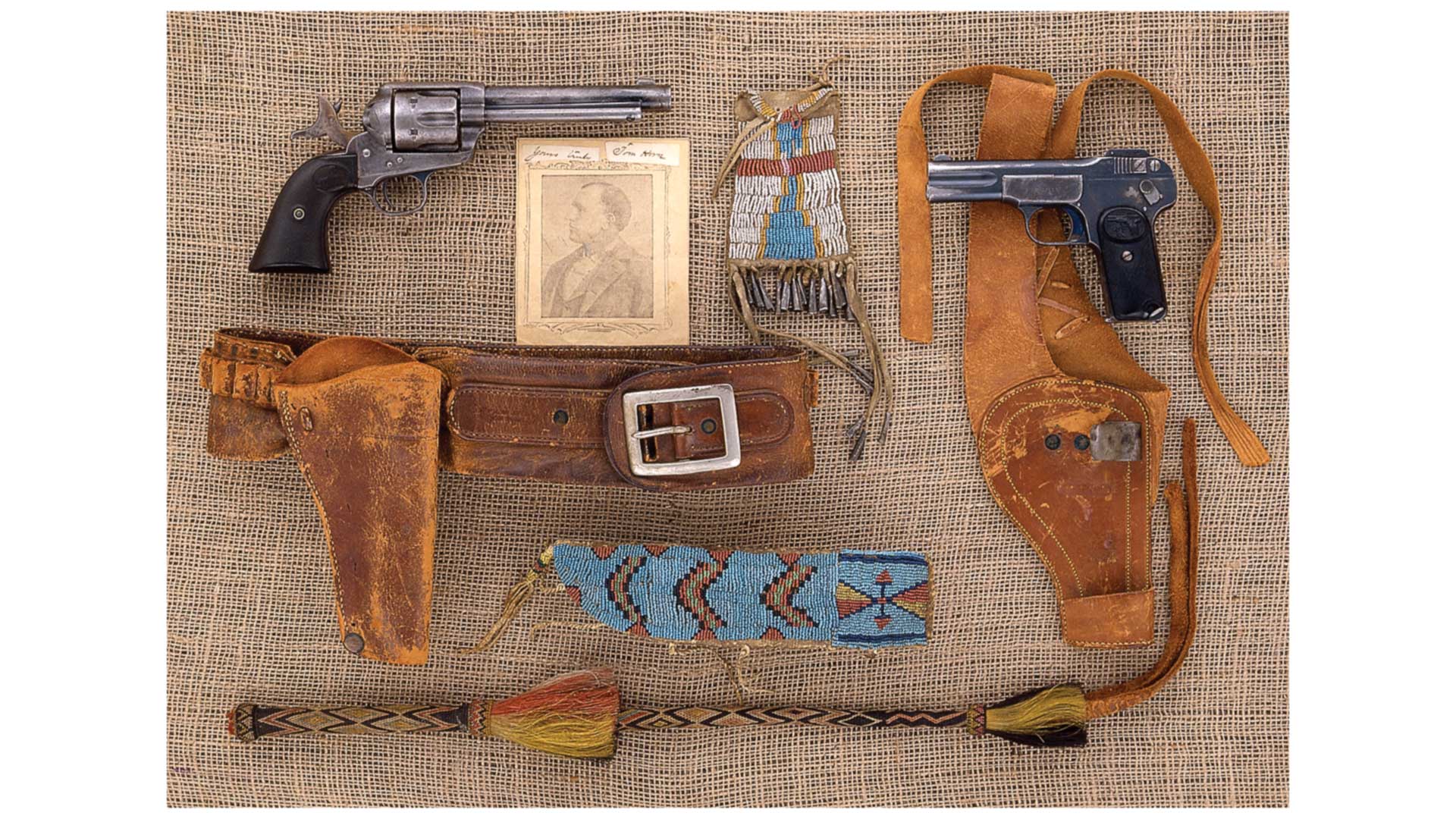 Shown (above) is an FN Browning patent semi-automatic pistol Tom Horn took from a deputy sheriff.

While in prison, Horn and his cellmate, Jim McCloud, concocted an escape scheme. On Aug. 9, 1903, they overwhelmed Deputy Sheriff Richard Proctor and, at gunpoint, forced him to open the safe that held the jail keys. At the same time, Proctor grabbed his FN-Browning patent Model 1903 semi-automatic pistol and opened fire. The prisoners wrestled him to the floor, but Proctor managed to slide the safety switch on the newly designed handgun, preventing firing.

Horn charged into the street but was unfamiliar with how to make the pistol work. In effect unarmed, he was chased down by local citizens, who pummeled him with sticks and clubs until he was rescued by Proctor. Horn accepted the inevitably of his sentence and spent his final weeks weaving horsehair quirts and ropes, including the rope for his own execution. On Nov. 20, 1903, he went to the gallows calmly, asking Proctor to place the noose over his head. Ironically, although responsible for several frontier shootings, Horn was likely innocent of Nickell’s murder.

Horn’s final letter to Proctor expressed appreciation for his friendship and for “the many little kindnesses you have done for me during my confinement under your charge. Only your desperate courage kept me from escaping.” The doomed adventurer also presented Proctor with his Colt six-shooter, a handmade horsehair riding crop and a beaded knife scabbard and bag—all of which today memorialize Horn’s story.

The heroic role of the Texas Rangers in Western lore is represented in the Koch collection by two Colt .45s of Capt. William J. McDonald (1852-1918). In January 1891, Gov. James P. Hogg appointed McDonald captain of Co. B, Frontier Battalion, Texas Rangers. He soon became one of the most respected and feared lawmen in Texas.

Among his innumerable adventures, McDonald survived several pitched gun battles, served as a hunting guide for President Theodore Roosevelt and a bodyguard to President Woodrow Wilson. Arriving by train to a Texas town in response to authorities’ plea for help in quelling a riot, McDonald was asked where were the other Rangers. His answer became a classic of Texas lore: “Well—you only got one riot, haven’t you?” Reacting to a race disturbance in Brownsville, Texas, it was said of McDonald he would “charge hell with a bucket of cold water.” The captain’s Colts reveal the predilection of not a few Old West luminaries for engraved six-shooters with fancy grips and finishes. 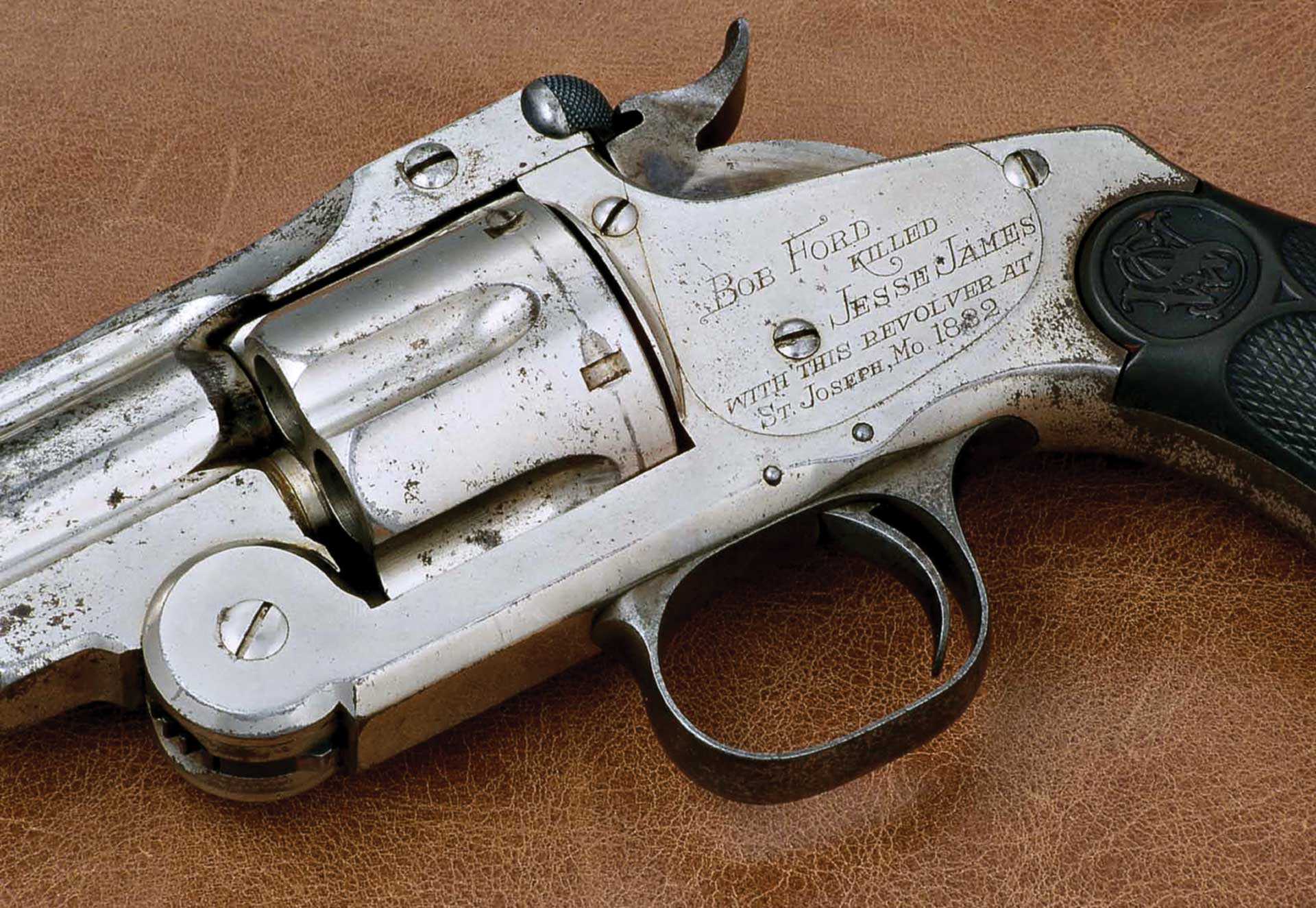 This Smith & Wesson Model No. 3 single-action revolver was used by “the dirty little coward” Robert Ford to kill Jesse James. Note the inscription on the sideplate that indicates this fact (above, r.).

Perhaps even more legendary—indeed, maybe the most notorious gun in Koch’s collection—is the Smith & Wesson Model No. 3 Single Action revolver that Robert Ford used to kill the outlaw Jesse James. The sideplate inscription, engraved by the Smith & Wesson factory, documents Ford’s role in the assassination of James at St. Joseph, Mo., on April 3, 1882: “BOB FORD/KILLED/JESSE JAMES/WITH THIS REVOLVER AT/ST. JOSEPH, MO. 1882.” The gun is accompanied by a signed and notarized letter by Col. Corydon F. Craig, to whom Ford presented the gun shortly after the shooting, as well as an article from the Baltimore Morning Herald that details its provenance.

Ford tried to capitalize on his notoriety and occasionally sold other revolvers he claimed to have used in the assassination. But “the dirty little coward”—as he was known in the song commemorating the event—was never able to claim the $10,000 reward. And in an example of frontier justice, Ford was cut down by a shotgun blast at the hands of shootist Ed O’Kelley, in Creede, Colo., in 1892. The deed was partially in revenge for the murder of Jesse James.

The documenting letter and article, along with the Jesse James revolver ensure that the story of this Smith & Wesson will be preserved.

A recent acquisition, integrating decorative arts with firearms, is the custom-built matched pair of gold-plated and deluxe-engraved Colt Officer’s Model Match revolvers of matinee idol and superstar Tom Mix. These elaborate pistols also represent the flamboyance common to most of the post-Old West characters, creators of the new West of Hollywood on the silver screen—later magnified for a colossal television audience. Mix, an authentic cowboy, Wild West show performer, rodeo champion and his own stuntman, wryly observed that it was easier for a cowboy to become an actor than for an actor to become a cowboy. Like Gene Autry, Roy Rogers, John Wayne and today’s Tom Selleck, Mix was himself a keen collector of firearms.

As these stories illustrate, aficionados of firearms share a rich heritage—both in the objects they collect and in the pedigrees of past and present collectors. By understanding the time-honored and historic connection between all the arts and antiquities and the field of firearms, and integrating his Western room with his other collections, Bill Koch continues the traditions of the past and inspires the grand collectors of future generations.

The Museum of Fine Arts, Boston, exhibits “Things I Love: The Many Collections of William I. Koch,” selections from one of the most distinguished private collections of arms of the American frontier. For more information call (617) 267-9300 or go to mfa.org.

This article appeared originally in the September 2005 issue of American Rifleman. To subscribe to the magazine,visit the NRA membership page here and select American Rifleman as your member magazine.