If you spend enough time at gun shows and public shooting ranges, you’ve likely run into your fair share of scope-mounting abominations. It seems nothing gets it worse than military surplus rifles, mainly because they lack basic provisions to get the job done and invite improvisation. Nonetheless, sometimes the old warhorses benefit from the addition of glass, if only but for a short period.

Although there are many non-permanent mounting systems for the most common rifles, I have found that most are nothing more than mere gimmicks, don’t fit or are some sad combination of the two. However, some folks do indeed get it, and here are three that I found work well.

Many M1 Garand rifles suffer from poor accuracy, despite having pristine barrels and chambers. The culprit is typically some variety of sight jiggle. As the front sight’s stability depends on its fit to the barrel’s splines, I’ve seen rotational instability far exceeding the rifle’s accuracy potential. Rear apertures also wiggle far outside my comfort zone, and getting them to hold still might involve replacing an original part, a major no-go in my book. By installing the Sadlak M1 mount, we can forgo the sights altogether and put a modern optic on the Garand without any permanent alteration.

The process starts by removing the entire rear sight assembly, leaving you with a pocket and a pair of ears to run mounting hardware through. The main mounting screws use these holes in conjunction with the pocket’s geometry to hold the mount in place, the same way a modern Picatinny rail hugs a receiver’s contour to keep it from shifting. Sadlak includes a set of brass shims to take up any space between the ears and the mount. I found that my 1945-made Springfield Armory M1 accommodated one on each side rather tightly to the point of requiring gentle tapping to set in place.

Lastly, the scope is leveled and snugged by adjustment screws both fore and aft, which are held in place by the included thread locker and their respective set screws. This leveling option allows the installer to add up to 60 m.o.a. of cant to the base for those looking to reach out. Every attachment and leveling screw involved has a set screw keeping it in place, a technique that most modern firearms mounts don’t even employ. I appreciated this “belt and suspenders” approach, as it shows that Sadlak is not only familiar with this mount style’s malady but also did something to remedy it. 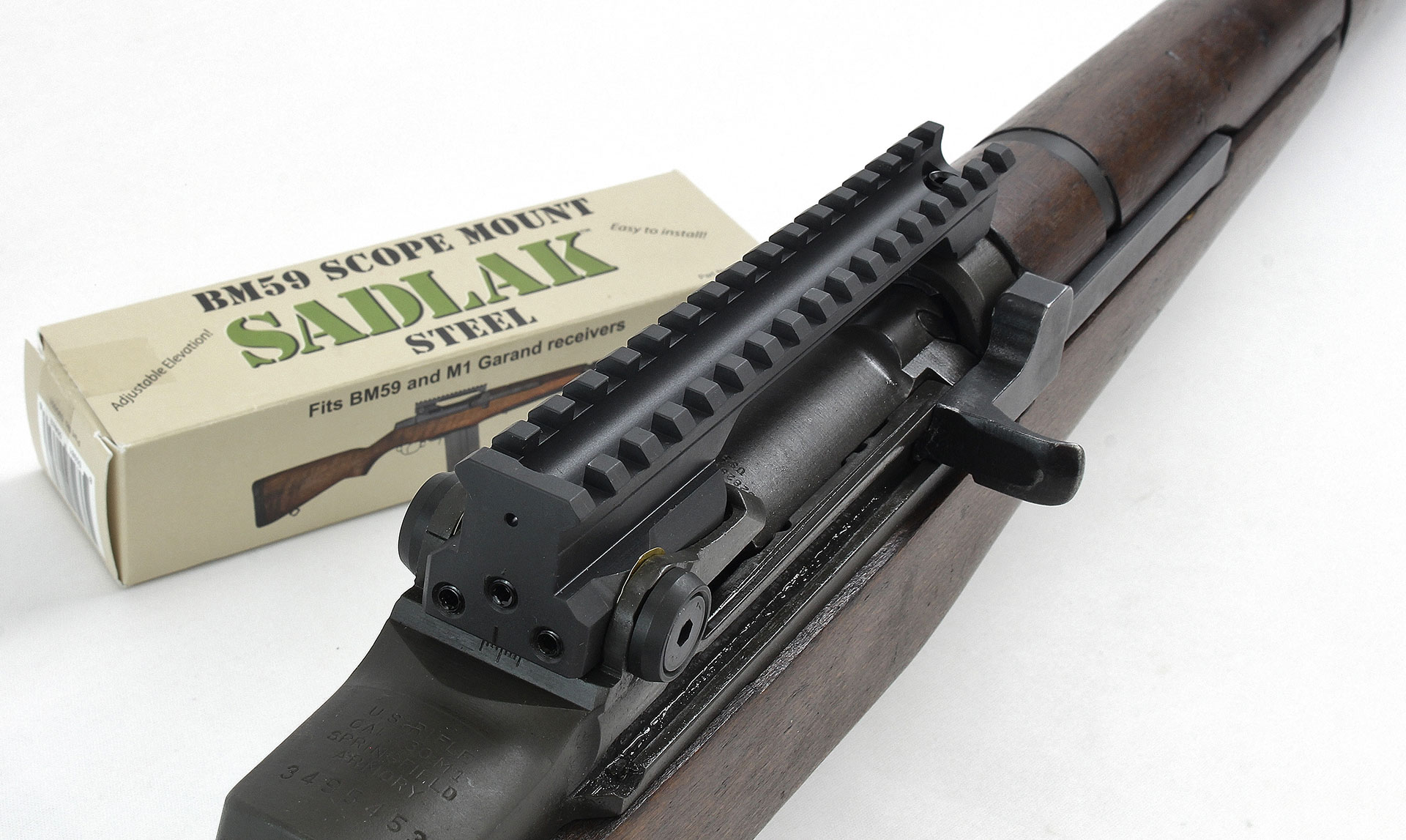 We completed our work by adding an EoTech Vudu 1-10x low-powered variable optic (LPVO) with the lowest Talley Rings we could find. Optics sit inherently high on this platform, so we combated this by installing a Tuff Products Butt Stock Saddle to give us a better cheek weld. Altogether, it created an excellent long-range rifle with the needed hardware to reach out to 1,000 yards and call my own hits.

The only downside I can speak of is that it essentially turns your M1 into a single-shot rifle. This is because the rail closes off any means of inserting an en-bloc clip. However, by installing a Mountain Aerospace Machining M1 Thumbsaver, or its predecessor, the Holbrook Device, and a clip beforehand, one could leave a clip in place and top feed multiple rounds of ammunition without fear of breaking a thumb.

Carcano carbines also suffer from poor sights, but the root of the problem stems from their geometry, not their stability. The main idea is to bury the front post into the “V” of the rear notch with just “a little bit” poking up. The problem is that the conversion of m.o.a. to “little bits” is rather extreme. Now, if your sight is poking up even just a few thousandths more than the shot before, you have no hope of determining why your shots are so far apart. This issue makes load development virtually impossible. Pennsylvania-based S&K Mounts recognize the utility of this rifle (and dozens more like it) as well as its limitations and, as such, have an excellent mount to garner more use from them. 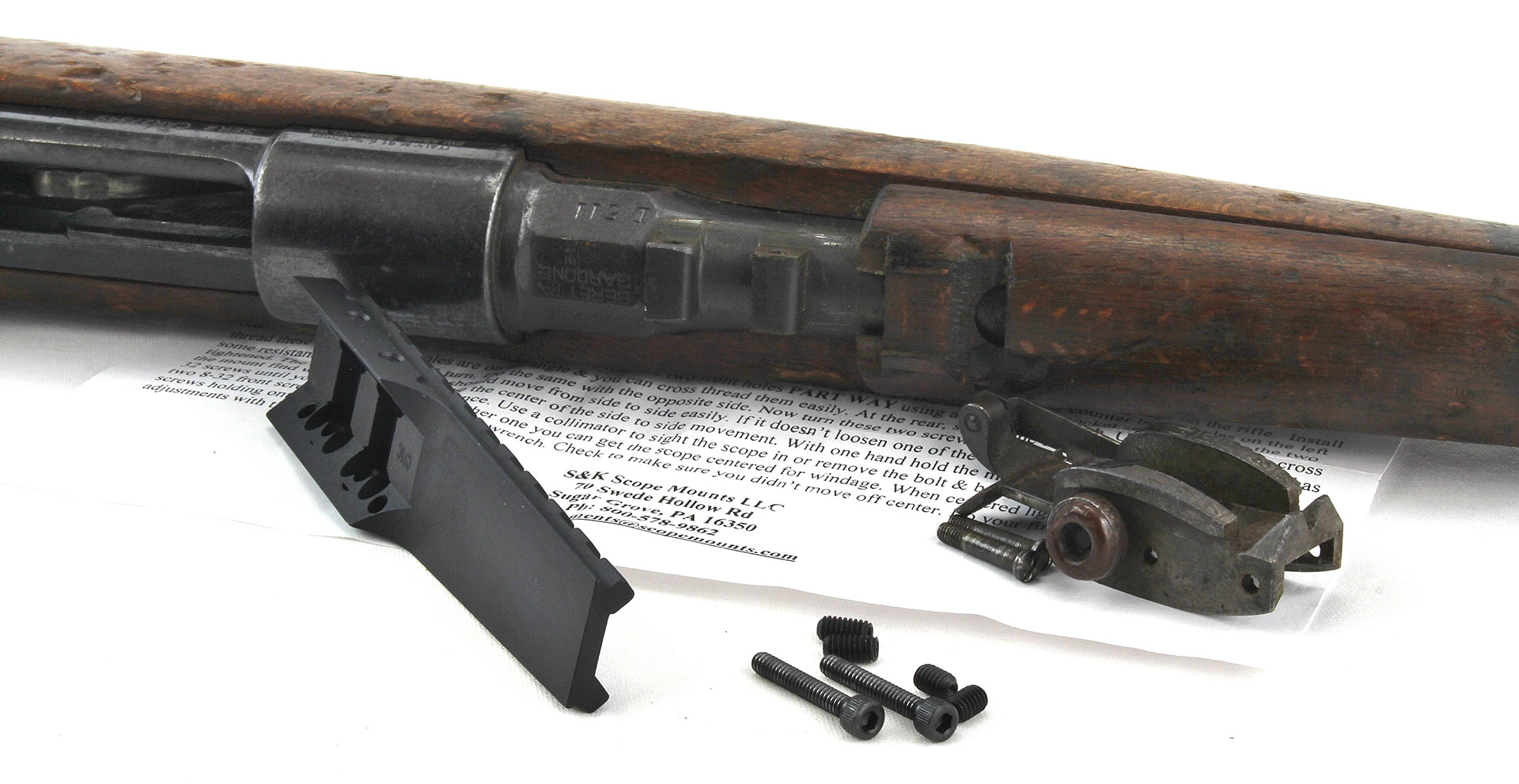 The mount replaces the rear sight of the most popular Carcanos, which only involves removing two slotted screws. S&K does warn that sometimes it takes a little heat to get them to crack, but that wasn’t my experience in the slightest. The mount drops over the now exposed sight lugs and is cut to an exact fit that prohibits any wiggle. It is held in place with two cross bolts that slip through the existing holes in the sight lugs and thread back into the other side of the mount. The design also features four set screws to center the snug the mount if needed, but I didn’t find them necessary. 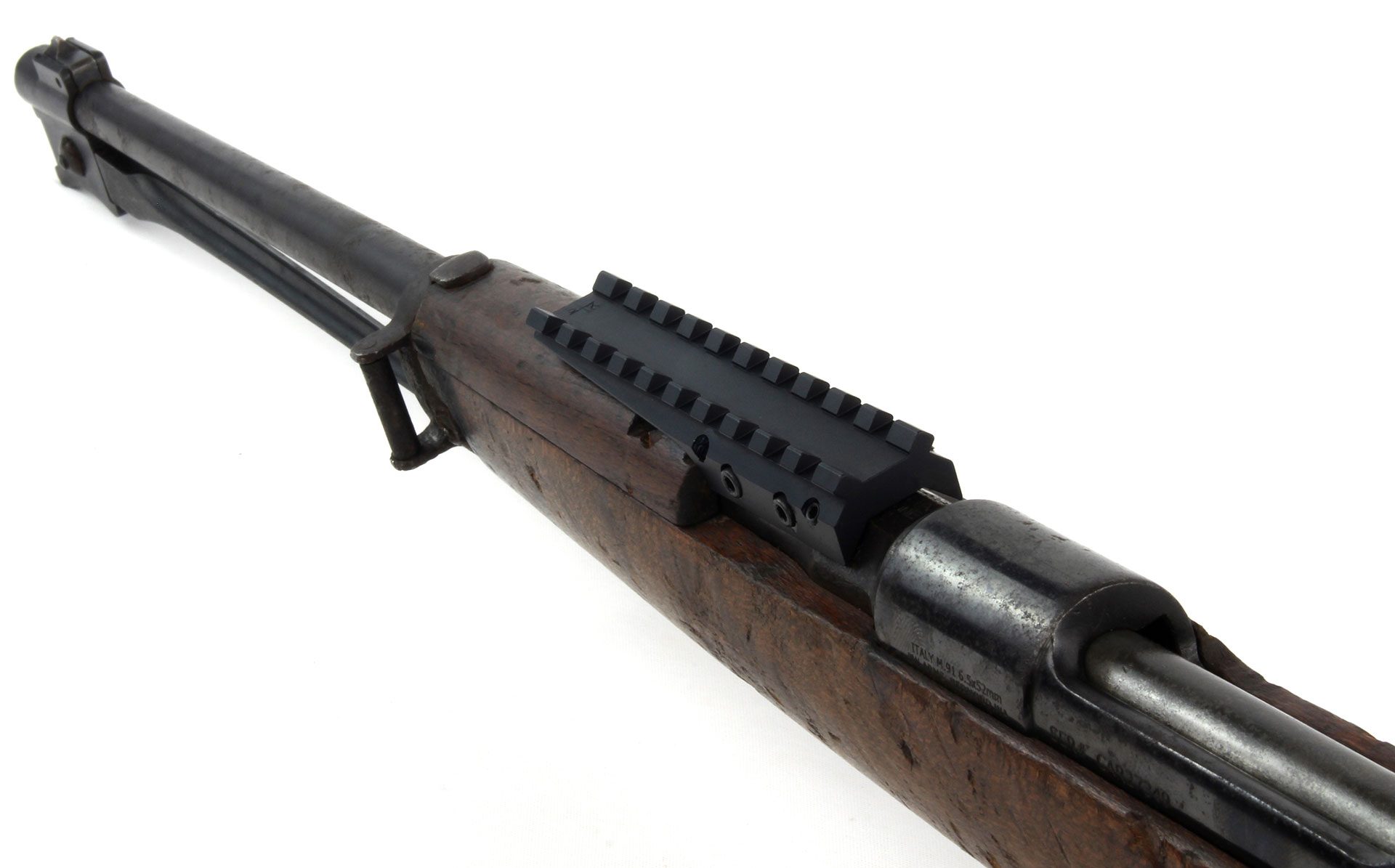 As this mount sits rather far forward, optic selection is limited to long-eye relief scopes or red dots. As I wanted to use this to develop a deer hunting load, I opted to use an old Nikon pistol scope that was collecting dust, as it offers 8x magnification. Afterward, I will likely swap it out with a large-window LED dot to leave me with a handy little rifle that will be easy to swing inside of a blind and offer enough energy to harvest medium-sized game ethically without excessive recoil.

Although the M1 carbine was criticized for its ineffectiveness in combat, the tiny .30-cal. round has plenty of punch for dispatching pests that lurk in the shadows of farms and ranches. However, its dovetailed rear aperture sight can use an upgrade. Aside from being slow to align with the front post, this peep sight is notorious for sliding within its notch. S&K makes a mount that uses this dovetail but locks into place by extending down over the receiver’s sides. I praised this system for its simplicity, as installation required nothing more than drifting the old sight out and replacing it with the included dovetail nut.

The dovetail on my National Postal Meter M1 was so worn that I was able to handle the entire process using a socket extension and an ordinary hammer from a $20 tool kit. If I felt like walking up a flight of stairs, I could have been more precise by grabbing a punch or even pulling the barreled action from the stock to employ a sight pusher. Once centered, a solemn screw is driven through the mount itself into the dovetail nut, providing additional tension between the nut and the receiver to stabilize it further. 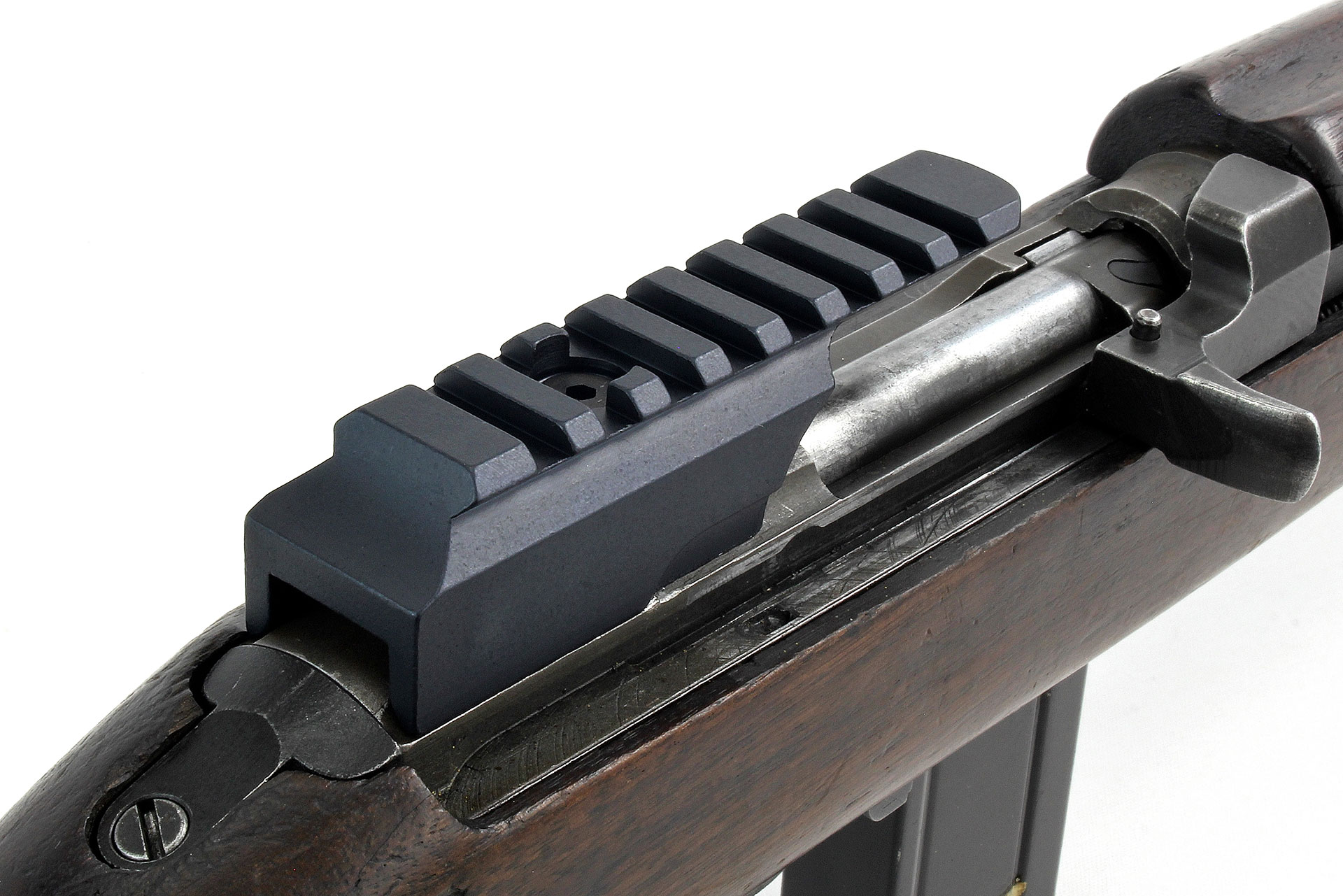 The mount only gives you eight Picatinny slots to work with, as the M1 carbine doesn’t provide a lot of real estate. Therefore your glass selection needs to stay a little tight. I found the compact Trijicon ACOG was a perfect fit, and now as they are shipping with an included QD mount, it fits the S&K rail with room to spare. Even though my cheek weld needed to become a chin weld, I could still find the glowing chevron without much fuss. Altogether this made for a handy little truck gun that would be a godsend should one find an early morning coyote slinking towards the chicken coop.

While the historian in me cringes from looking at what I’ve done to these legendary rifles, the utilitarian in me appreciates that these guns can now reach their full potential and see improved accuracy along the way. At the same time, knowing that I haven’t done anything permanent allows me to sleep at night. I can also rest my head comfortably, knowing that these rifles will see more life outside of of the safe, which is why I collect historic firearms instead of stamps or coins. For more information, visit sadlak.com and scopemounts.com.

A Gun-Control Advocate Will Run the ATF