May 20, 2022 Guns In The News
Home»Guns»Review: Bond Arms Roughneck
Guns

There is beauty in simplicity and utility. Nowhere is this truism more apparent than with firearms, and Bond Arms’ extensive line of stack-barrel handguns, in particular, provide a great example. The company’s Roughneck derringer is Bond’s entry-level option, but don’t let that fool you, as the quality of its materials and craftsmanship rival those of the company’s top-end variants. Our sample for this evaluation was chambered in 9 mm Luger, but .45 ACP and .357 Mag. versions are also offered.

The difference lies in the amount of refinement that goes into the handgun’s finish. Compared to other Bond derringer models, the company performs minimal clean-up and deburring on the Roughneck—but enough to ensure there are no sharp edges—and applies a bead-blast finish to the cast, stainless-steel frame. Slight tooling marks remain on the barrel, and small casting imperfections can be found on the frame since it’s not sanded, but, according to Bond, four or five Roughnecks can be produced in the same amount of time it takes to make one of its Texas Defender models. 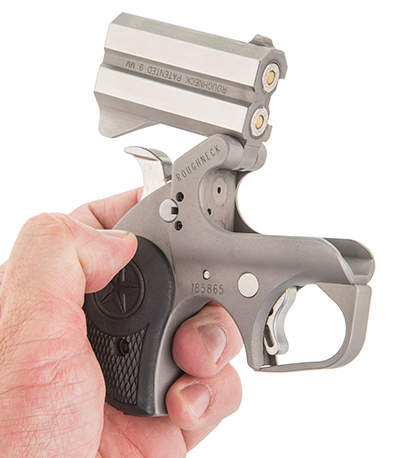 The Bond Roughneck alternates between its two barrels each time the hammer is cocked.

The Roughneck’s steel frame no doubt contributes to its hearty, 19-oz. weight, and, like most of the company’s derringers, the trigger guard is formed with a separate piece of steel secured in place by way of a single Allen screw. No movement was noted, and the trigger guard can be removed if so desired.

Behind the trigger, on the left side, is the spring-loaded, lever locking handle, and pressing downward frees the barrels to swing upward, or away from the frame, for loading, unloading and swapping to other Bond Arms barrels. Barrel exchanges require an 1/8″ Allen wrench to remove the single screw. The Roughneck in 9 mm is devoid of an extractor—more on that later.

Other fire controls include the crossbolt safety and the single-action trigger. The sample handgun’s trigger pull averaged 6 lbs., 2 ozs. The first bit of movement produced an audible tinging sound, but from that point on, there was zero creep. Overtravel was nonexistent.

The Roughneck has an integral gun lock that operates via the provided Allen wrench. Other noteworthy features include retracting firing pins and a patented, locking rebounding hammer. The hammer measures 0.400″ at its widest, giving the user extra leverage when cocking, while grooves on its surface enhance purchase. The Roughneck is equipped with rubber stocks, however, these can be quickly and easily exchanged by removing a single screw.

Very simple to operate, controls on the derringer include a crossbolt safety (left) and a left-side, spring-loaded lever locking handle (right).

There is no manually operated switch to determine which barrel fires first; the handgun simply alternates between the two each time the hammer is cocked. That being said, there is an uncomplicated means to achieve a preferred firing pattern outlined in the owner’s manual. We verified the method. Why is this important? A lower-barrel first shot allows for a quicker follow-up, but it also impacts notably lower than the top barrel.

The Roughneck’s 2½” stainless-steel barrels have both bead-blasted and smooth exterior sections, a combination that we found to be pleasing to the eye. Topping the barrels is a ramp front sight that works in unison with a notch rear machined into the pivot point. The Roughneck will accept aftermarket Bond Arms barrels with lengths from 2½” to 6″ in at least 37 cartridge combinations, from .22 Long Rifle to .45 Colt/.410 bore. Note that +P loads aren’t recommended.

The full accuracy report is found nearby, but some results warrant elaboration. Of the loads tested, the standout was Nosler’s Match Grade Handgun 124-grain JHP, which averaged 1.11″ in the top barrel and 1.28″ in the lower. Across the board, the top barrel edged out the lower one. During accuracy testing, we did note that, with some groups, there was horizontal stringing. This was attributable to slight side-to-side play in the barrels—which is an unavoidable byproduct of barrel interchangeability. Still, accuracy was good. 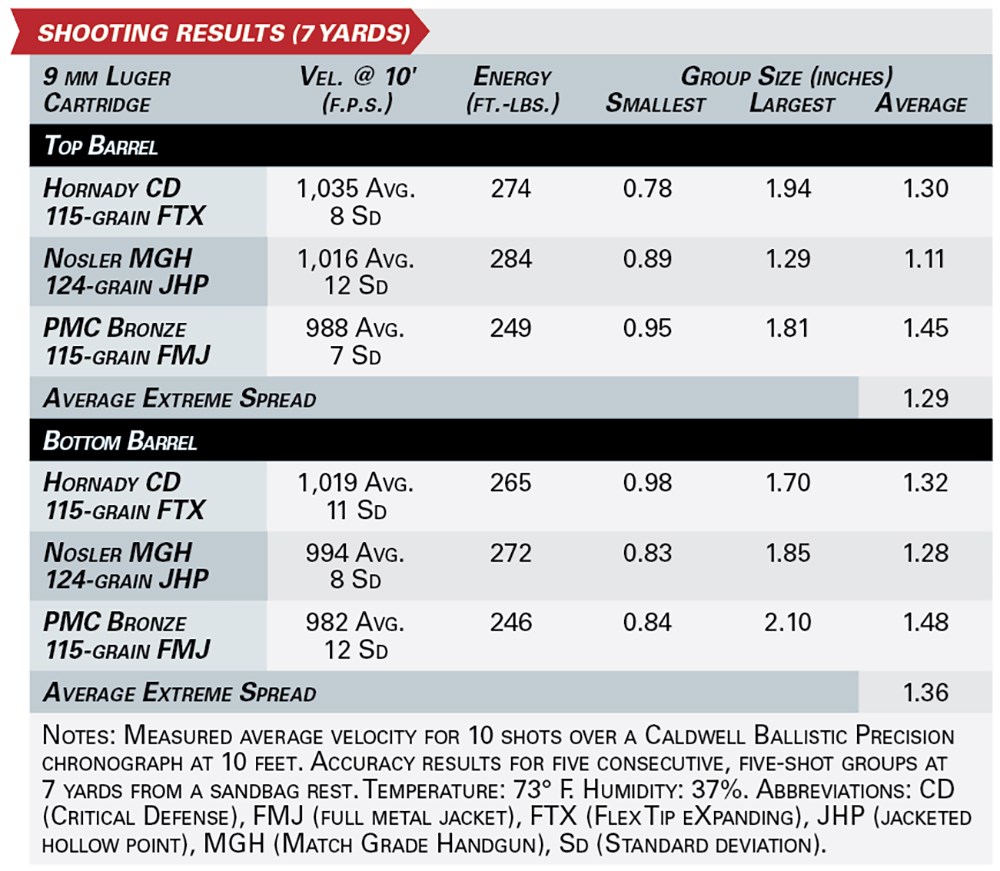 Interestingly, only Nosler cases would fall free after firing; without the aid of an extractor and ejector, removing the spent Hornady and PMC cases required the assistance of a fingernail, pocketknife or spent case. A notch in the barrel aids this process. One failure to fire was encountered with the Nosler load, but it was ammunition-related, as the primer was heavily dented.

The Roughneck is sizable for a derringer; given its weight and palm-filling width, recoil was negligible throughout most of the test. However, the gun’s short grip and two-finger hold permit movement, which can cause discomfort when firing to the extent that we did. Under normal circumstances, this should be a non-issue.

Bond Arms did a praiseworthy job in creating an economical counterpart to its extensive line of top-notch derringers. The Roughneck is accurate, reliable and rugged, and it offers unparalleled versatility. Simplicity and utility—a pleasing combination. 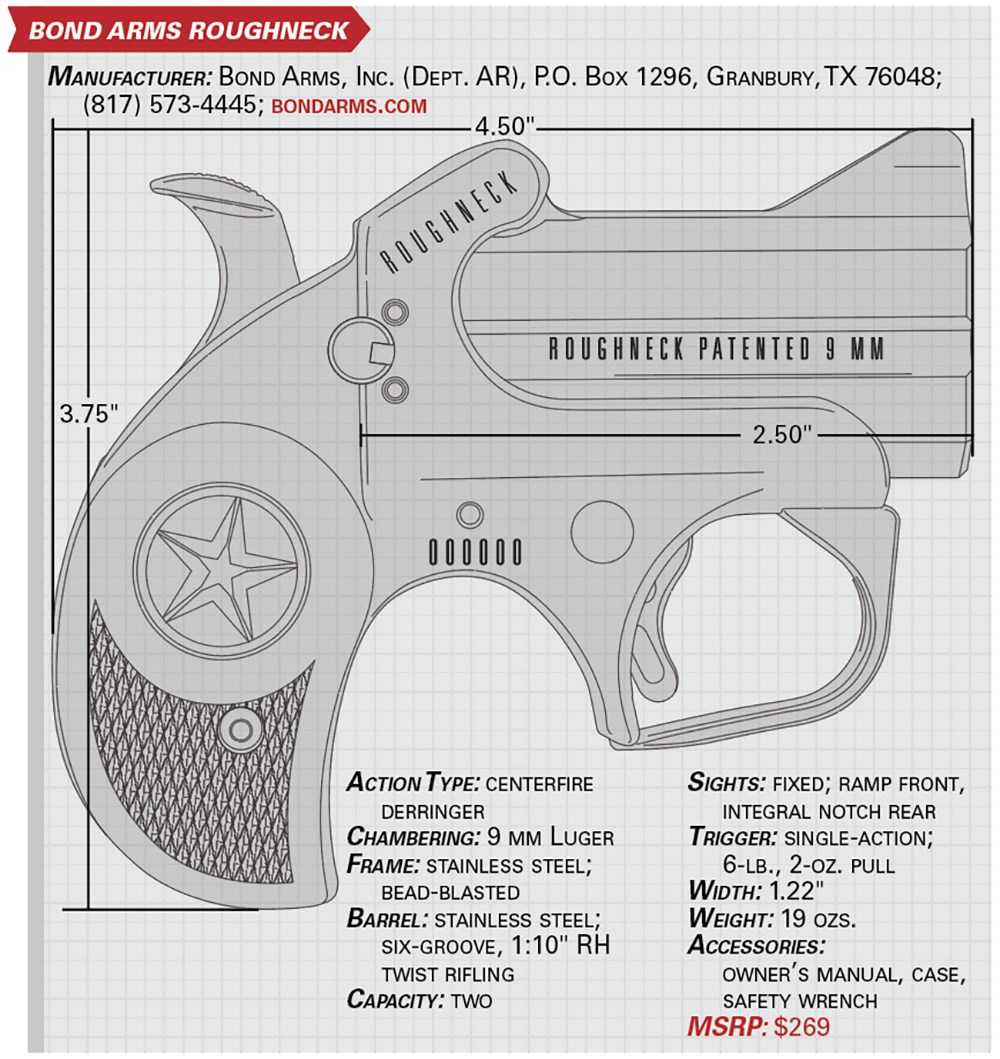