Shooting single-action revolvers modeled after the classics of the Old West is great fun, at least until it’s time to reload. But removing fired cases one at a time can be a bit taxing, as can refilling the cylinder with costly centerfire ammunition, just for the sake of dispatching a few tin cans. Florida-based firearm manufacturer Diamondback likely came to the same conclusion shortly before it conceived of the Sidekick. The company’s first foray into wheelguns combines old-world styling with modern conveniences, which is why we reached out to Diamondback to obtain a sample for testing.

The rimfire Diamondback Sidekick is built with a Zamak 5 frame that supports a carbon-steel barrel that is pressed and pinned into place. The wheelgun’s metal parts have all been given a Black Cerakote finish to help provide abrasion and corrosion resistance.

Looking at first glance a bit like a Colt Single Action Army clone, the nine-shot .22 Long Rifle-chambered revolver is actually a DA/SA design with a swing-out cylinder—no doubt where its derives its moniker. This means the Sidekick can be fired in double-action mode by simply depressing the trigger, which cocks the hammer and advances the cylinder in a counterclockwise direction before allowing the hammer to fall, discharging a round. The Sidekick is also a convertible, coming with an additional cylinder chambered in .22 WMR. 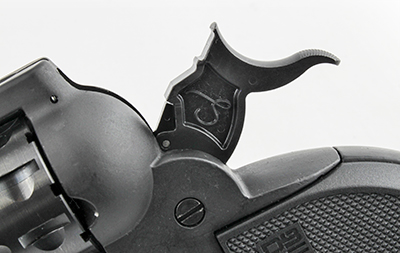 Despite looking at first glance like a Colt Single Action Army clone, the Sidekick employs a DA/SA trigger system, allowing the shooter to prioritize speed or accuracy as needed.

For a lighter and shorter stroke, the revolver’s hammer can be cocked manually before firing. The serrated spur facilitates that process nicely, ensuring that the shooter’s thumb doesn’t slip while pulling the hammer back. If that were to happen, however, a passive hammer block stops the gun from firing and also acts as a drop safety, as it only rotates out of the way when the trigger is depressed.

The Sidekick revolver is built with a Zamak 5 frame that supports a carbon-steel barrel that is pressed and pinned into place. The included iron sights consist of a fixed blade up front and a square notch cut directly into the frame at the rear, and the metal parts of the gun have been given a protective Cerakote finish. Attached to the plow-style handle is a pair of black-polymer stocks with the Diamondback logo that are molded with fine checkering to enhance purchase on the gun. Further insignias include the word “Sidekick” scrolled across the left side of the barrel and its signature “S” relieved into both sides of the hammer. 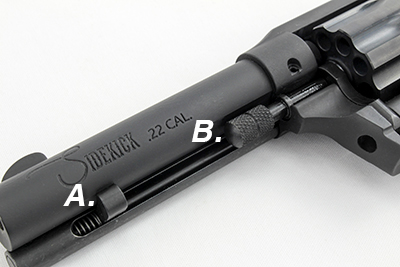 The cylinder release system of the Sidekick is arguably its most unique feature. It can be activated by pulling the knurled double-action-style ejector rod forward or by pressing the single-action-style ejector rod tab toward the muzzle. These parts are built from carbon steel and are either blued or Parkerized. Once released, the cylinder swings out to the left side of the frame, and the cases or cartridges can be removed by pressing the attached ejector rod rearward. This activates a standard star extractor, knocking out all nine cases simultaneously.

Switching over to the included .22 WMR cylinder takes less than a minute and only requires the use of an improvised punch. This is done by first swinging out the cylinder and ensuring that it is empty. Next, the gun is laid on its right side so that a tool can be inserted into the opening in the front of the frame, depressing the link pivot pin. With the pin depressed, the .22 LR cylinder can be removed and replaced with the included .22 WMR unit. 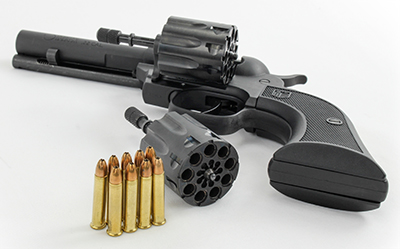 The .22 Long Rifle-chambered Sidekick also comes from the factory with a nine-round .22 WMR conversion cylinder, and switching between the two takes less than a minute.

We tested our Sidekick with a variety of .22 LR ammunition, including rounds from Aguila, Remington and Federal, alongside Winchester’s High-Velocity Varmint .22 WMR. Naturally, our first impression involved loading and unloading, as being able to swing the cylinder out almost felt like cheating. Cocking the hammer was almost effortless, as was depressing the trigger afterward, as it only required 2 lbs., 8 ozs., of pressure to fire in single-action mode. Double-action mode was a different matter, however, as it took nearly 12 lbs. of force to move the trigger through its entire stroke.

Accuracy was adequate for a pistol designed for casual plinking, and we found the point of impact to be approximately 4″ low on our 25-yard test targets. In an effort to stay true to the designs of the day, the sights do not have any provision for adjustment, other than filing to size. We finished our testing by swapping cylinders and unloading a box of magnum fodder onto a falling plate rack with satisfying effect. The gun operated as intended with the longer cartridges and kept time throughout the conversion just as it should, which is always a concern when changing cylinders in a convertible revolver. 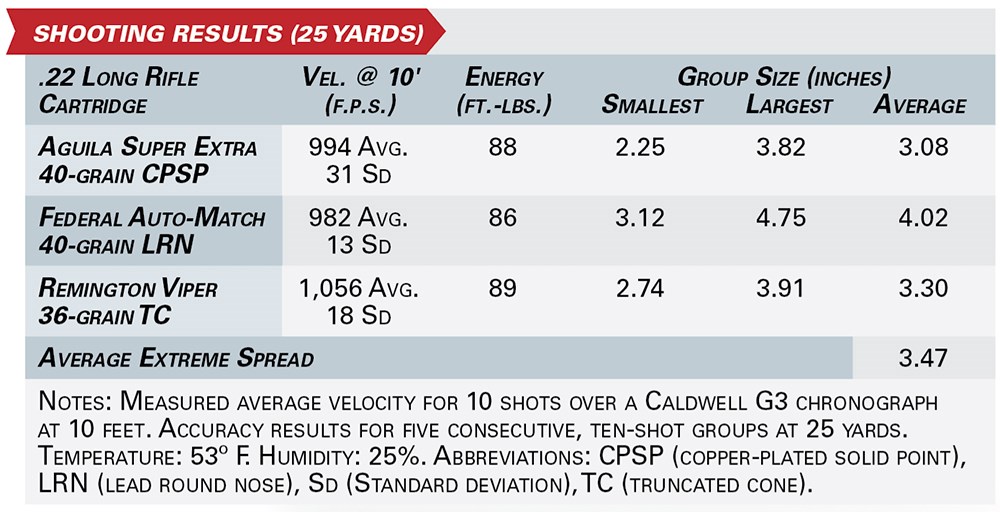 As our evaluation came to a close, the consensus was that the Sidekick is a great offering for anyone who wants to own a classic-looking revolver but who also enjoys high-volume shooting. The swing-out cylinder makes sending a brick of .22 LR downrange during the course of an afternoon a nearly effortless task—far more so than with slow-loading single-action-only designs. All in all, Diamondback’s first revolver checks a lot of boxes and has enough utility to be a justifiable addition to any collection, particularly at its wallet-friendly price point. 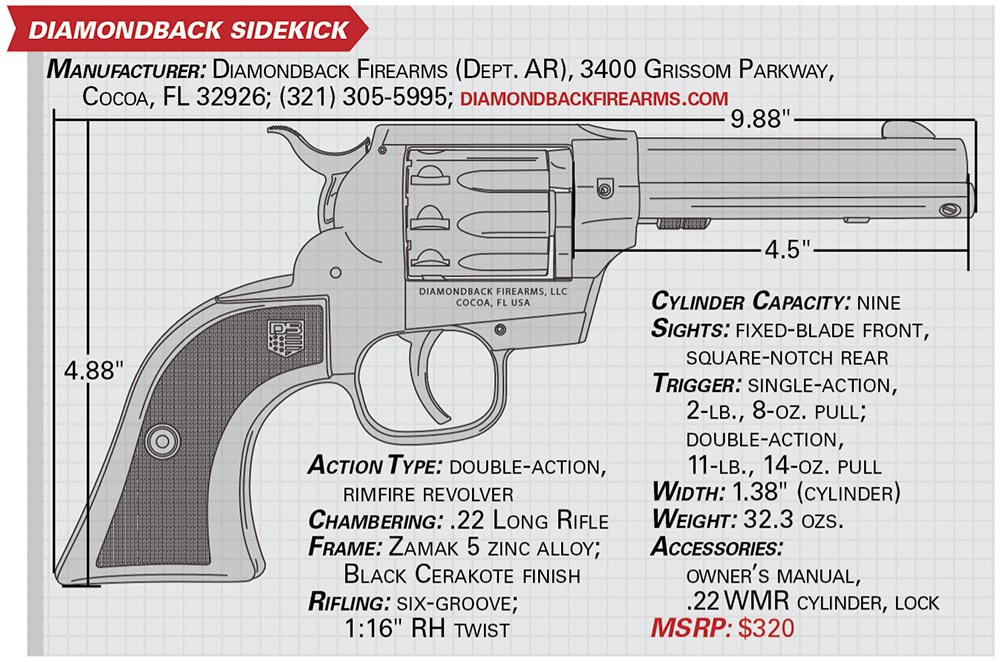