Leupold’s DeltaPoint Micro doesn’t look like any other slide-mounted optic. Rather than using a flat-bottomed design, the DP Micro features an L-shaped mounting surface that covers the top-rear portion of its host’s slide, with a small 9 mm lens sitting atop the gun and the battery compartment overhanging the aft of the slide. While this design may seem odd at first, it all comes down to purpose and ease of use.

Instead of using a traditional adapter plate, Leupold’s DP Micro mounts into the firearm’s existing rear-sight dovetail, and it doesn’t require any special modification be made to the gun in order to mount onto a traditionally sighted firearm. The only limiting factor is in the profile of the handgun slide, and Leupold currently offers fits for Glock and Smith & Wesson M&P pistols.

Once mounted, the optic sits at the same height as would traditional iron sights. The shooter, assuming the same front-sight focus emphasized for iron sights, simply brings the dot squarely on target, as the front post provides a reference point for the 3 minute-of-angle aiming dot. The cover of the battery compartment serves as a rheostat button to adjust between eight brightness settings.

Point of impact can be zeroed to match point of aim using a pair of screws on the left side of the unit. These screws do not feature tactile clicks as they turn, however, a full revolution of the windage and elevation screws will adjust point of impact by
36 m.o.a. and 18 m.o.a., respectively.

With a front sight, zeroing a mounted DP Micro can be done easily and brings the optic pretty squarely in line with the gun’s point of impact. We bore-sighted the optic by aligning the dot with the front sight. Once at the range, a few sighting shots confirmed that the optic had been zeroed, and that zero was confirmed out to 25 yards with no fine-tuning needed. 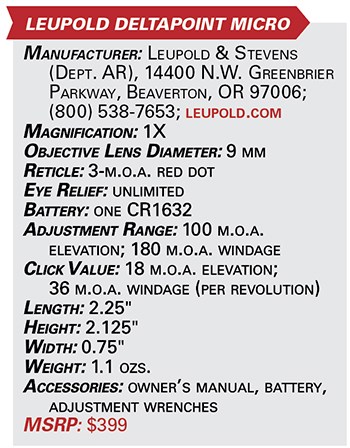 We fired approximately 350 rounds through a Glock G19 Gen 5 pistol mounted with a DP Micro. Despite the small size of the optical tube, maintaining the dot in view for follow-up shots was surprisingly easy, aided by retaining the front-sight focus practiced with traditional irons. Additionally, Leupold touts the ability for shooters to use the DP Micro as an aperture-style rear sight with the dot off. To aid in iron-sight shooting, the optic also features two milled circles on its rear face that aid in aligning the gun.

The test gun featured an XS Sights front sight. We found that it performed ideally in a “ghost ring”-style sight picture. Putting the dot-style front sight in the center of the open aperture placed rounds on target about 3” high at 25 yards. Aligning the target post with the two milled circles on either side of the dot moved shot groups lower than the intended point of impact.

Outside the range, we also carried the Glock and mounted DP Micro in a PHLster Pro Series appendix holster. Despite the added length protruding from the rear of the slide, we were still able to carry the gun comfortably, and while the optic was noticeable, it didn’t significantly impede our ability to sit or bend over and perform tasks while holstered.

Note that fieldstripping a DP Micro-equipped Glock will require removal of the unit’s battery and lid. Also, accessing the cover plate on the rear of a Glock slide will necessitate removal of the optic entirely.

The Leupold DeltaPoint Micro’s long battery life and durable construction make it dependable enough for daily carry, and its design provides a seamless transition for those used to shooting iron-sighted guns. We found it to be a welcome take on the slide-mounted red-dot concept.