The knock on easy-to-carry bantam rifles is that their slight build and thin-walled barrels can complicate field shooting—not what one wants for hunting wide-open expanses above the tree line—but our testing has revealed the Mountain Carbon to be an excellent shooter despite its impressive handiness.

When spun into yarns and fabrics, and then bonded with epoxies, tightly fused strands of carbon atoms can be used to produce materials twice as stiff as and five times stronger than steel per unit of measure, and gunmakers have started taking advantage of this efficiency in recent years. Thin carbon-fiber (CF) sheets are layered around rifled steel tubes to produce gun barrels, and the yarns/threads are suspended in a synthetic base material to strengthen rifle stocks without adding weight. As a result, alpine hunters and other light-rifle aficionados no longer must compromise performance for portability.

A BDL-style magazine floorplate is included on the M48, making it easy to unload rounds in a pinch. Below, the weight-reducing carbon-fiber material is apparent in both the barrel wrap and the stock.

The Mountain Carbon’s CF barrel is more substantial, and by all accounts stiffer, than those trim barrels typical on 6-lb.-and-under rifles. It may slightly outweigh the “soda straws,” but not by nearly as much as an equally stout all-steel barrel. The 24″ barrel on our .280 Ackley Improved test model measures 1.150″ in diameter at the breech, tapering to 0.794″ at the steel bolster backing the muzzle threading, for a contour Nosler calls Light Sendero. While those dimensions correlate to other makers’ Varmint or Magnum Sporter contours, comparing weight is more telling. For example, Mountain Carbon barrels profile closely to Savage’s steel Varmint contour, which weighs 4 lbs., 2 ozs., (.30 caliber at 24″), or nearly 25 percent more than the Nosler’s full barreled action.

What’s more, this barrel boasts cut rifling, a rare feature in hunting rifles or anything less than a full-on custom job. Earnest debate swirls around rifling preferences, and detractors say cut-rifled barrels wear faster. On the other hand, their dominance in benchrest competition, where hundredths of an inch matter, also says a lot.

(l.) At the front of the bolt, the dual locking lugs, wide extractor and large plunger ejector contribute to reliable function. A knurled bolt knob at the rear provides positive function in adverse weather. (r.) The Light Sendero-contour barrel is topped by a 5/8×24 TPI-threaded muzzle, complete with a knurled thread protector.

The bolt-action Model 48, the first production firearm from the Oregon firm most known for bullets and loaded ammunition, was inspired by bench guns assembled by the company’s in-house machinists for load-testing chores. While the action and receiver contain familiar elements, it is no knockoff of any particular design. Like many current derivatives of the Remington 700, the M48 bolt sports twin, opposed locking lugs, a fully recessed face and a plunger ejector. Also in the Model 700 vein is a two-position safety toggle on the right side just behind the bolt handle. It does not lock the bolt, so the rifle can be unloaded with the safety on. The bolt is a unitary CNC machining with shallow flutes along the shaft, not so much to reduce weight as to mitigate against grit interfering with the cycling of the action. Factory-installed is a proprietary Timney trigger which, on our test gun, broke at 3 lbs., 11 ozs., but felt lighter because of its negligible take-up and overtravel.

Unlike popular round-body-receiver designs, the stainless-steel Nosler receiver has a flat bottom and right angles that harken back to the Mauser 98/Winchester Model 70 tree. The receiver is also a single machined part, including its robust integral recoil lug that compares favorably to any current turnbolt, let alone competing featherweights. While the receiver floor is partly open to allow cartridge feeding, the side walls have a sculpted profile with extra steel to beef up rigidity. Overall, the build appears to be impressively strong, especially for a mountain rifle. A convenient touch is the receiver’s hinged-floorplate magazine, which matches the aluminum bottom metal.

While rifles in the 6-lb. class mostly come in short-action chamberings, the opposite is true of this gun, and if you are wedded to classic cartridges, the pickings are slim. The rifle is available in 6 mm Creedmoor, 6.5 mm Creedmoor, 6.5 mm PRC, .280 Ack. Imp., .300 Win. Mag. and five of Nosler’s proprietary numbers—26 Nosler, 27 Nosler, 28 Nosler, 30 Nosler and 33 Nosler.

Our test rifle in the Ackley round averaged just over a minute-of-angle five-shot grouping, which may not win many long-range matches but makes for an ultra-dependable big-game stopper. In some circles, the .280 Ackley has acquired a reputation for being a finicky shooter—perhaps because production models often are lightweights with slender barrels—but the accuracy and consistency we obtained will be more than sufficient for all but the most ambitious extreme-range hunters. With a high-ballistic-coefficient, controlled-expansion load such as Federal Premium’s 155-grain Terminal Ascent, the Mountain Carbon proved itself on hunts for desert bighorn and whitetail deer. 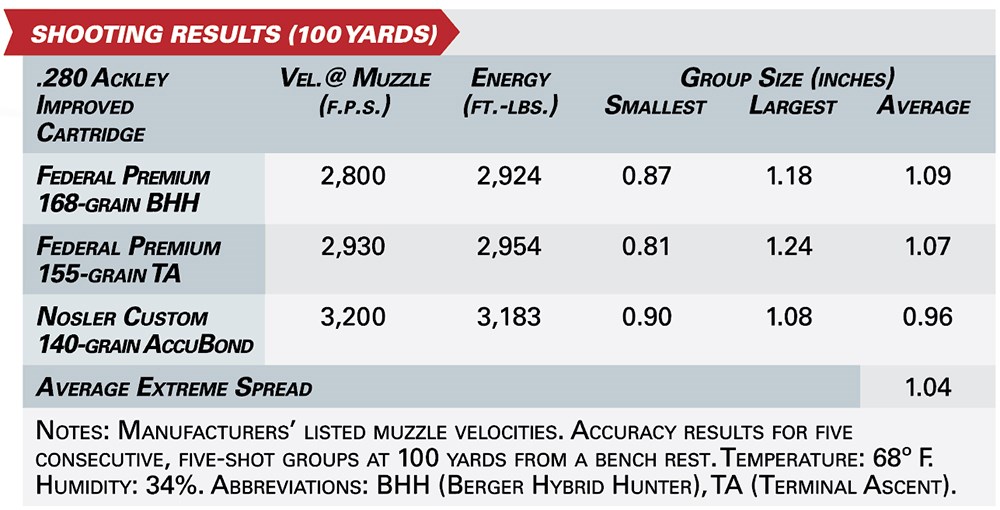 Just as impressive as the way it balances portability and shootability is the rifle’s handling. Some lightweights have stocks with abbreviated fore-ends, scrawny pistol grips and narrow combs—anything to save a couple of ounces. Nosler didn’t have to skimp on those contact areas, and it makes a difference in how smoothly the rifle shoulders, anchors, seeks its target and distributes recoil. Along with textured grip surfaces and a satisfying palm swell, the stock’s Monte Carlo cheekpiece helps to ensure speedy sight-picture acquisition, especially when the shooter is contorted in an awkward field position.

Utilizing CF threads that act like miniaturized rebar throughout the composite body material, the stock is also fortified by pillar bedding. Nosler conservatively calls it “weather resistant,” and it’s hard to imagine what conditions would give it trouble. And as synthetic stocks go, this one’s not bad looking. It comes in gray or green spatter finishes, both compatible with the metalwork’s full-coverage Tungsten Grey Cerakote.

The Nosler Mountain Carbon serves notice that gunmaking continues to change for the better. The astute use of carbon-fiber technology in two of the three major component units has produced a lightweight rifle that doesn’t stint on any of the performance factors so important to an extreme shooting sport.

ATF to Publish ‘Factors for Classifying Guns with Stabilizing Braces’