September 28, 2022 Guns In The News
Home»Commentary»Review: Rock Island Armory Side By Side
Commentary

Review: Rock Island Armory Side By Side

For the longest time I’ve wanted to add a side-by-side shotgun to my collection but just could not connect on a purchase that would leave me feeling good. As the market was nearly void of current production models, I turned my attention to gun shows and the like. In this arena, I found one of two types of guns for sale:

One: Shotguns that were so beaten up that I wouldn’t feel safe firing them.

Two: Shotguns that were so pristine that I wouldn’t feel right firing them.

After passing table after table loaded with examples of these two options, I eventually abandoned the idea and started the pursuit of my next firearm in another category (there’s always another one). Several years went by without the thought of this classic double-barrel design passing through my head, right up until Rock Island Armory brought out a new product for the 2022 SHOT Industry Day at the Range Event. Named simply the “Side by Side”, this Turkish import blended modern features with contemporary styling all for a price that made these tools as popular as they were back in their heyday. After getting to send a few shells through one towards a sea of clay pigeons, I instantly knew that I wanted to spend more time with it. 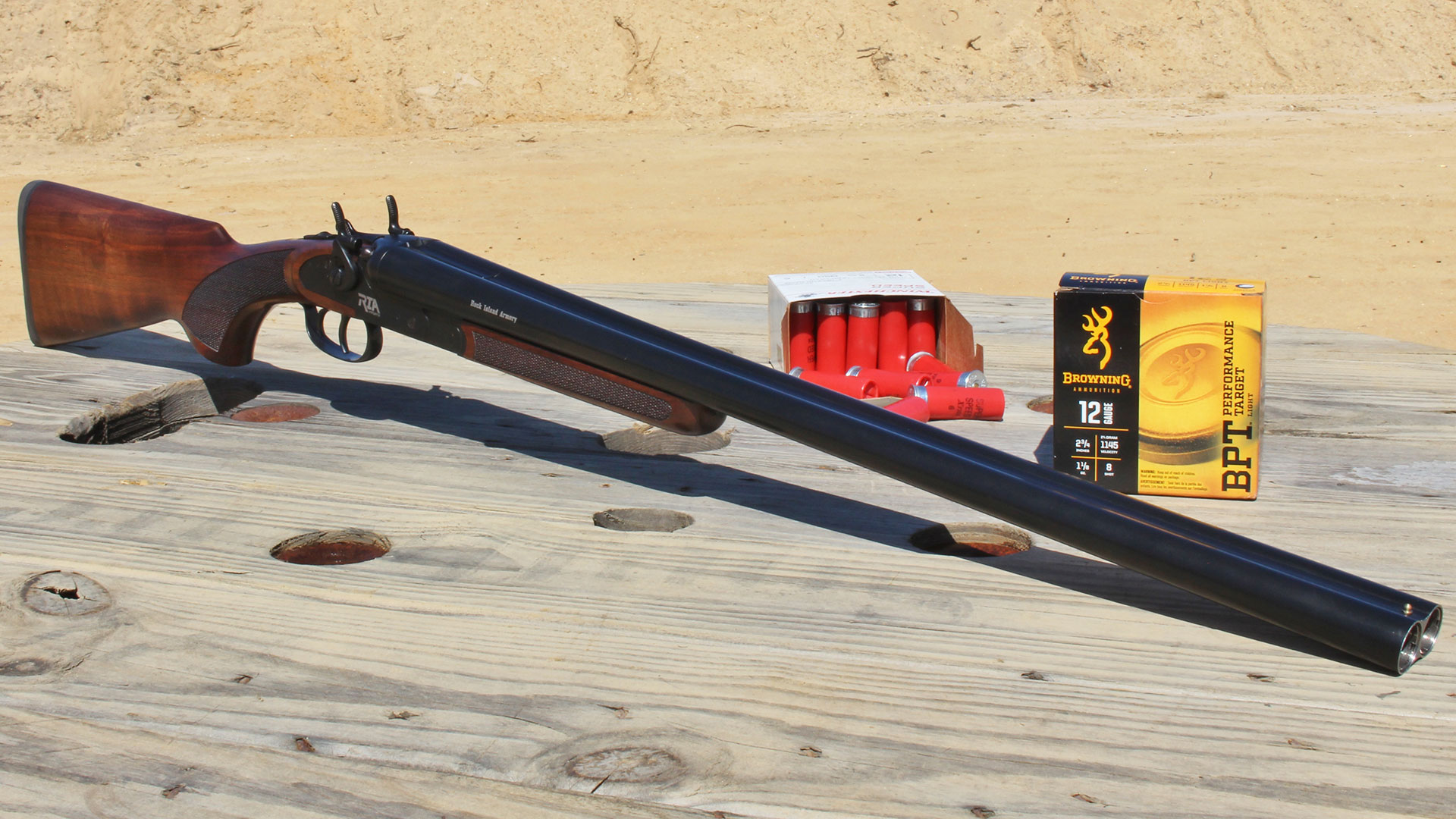 So, after signing a little paperwork and waiting a few weeks, one showed up at my FFL, and I cleared my schedule to immediately put it through its paces. The first feature that attracted me to the Rock Island Side by Side was its low retail price of just $599, meaning in the right market, these could easily hit shelves for under $500. As putting it within my budget for a “fun gun” instantly qualified it for examination, I proceeded with my general checklist. At the top of that list is fitment, as there is literally no wiggle room allowed in this department.

When I lock the breech of a break-action firearm, it has to be rock-solid. Otherwise, there is no way that I am planting my face against it and pulling the trigger. Needless to say, this shotgun was built exceptionally well, and its tight tolerances defeated every type of bending and twisting test that I could impart on it. The same tolerances carried into the furniture work as well, as the oil-rubbed walnut fore-end and buttstock sat tightly against their adjacent metallic components. 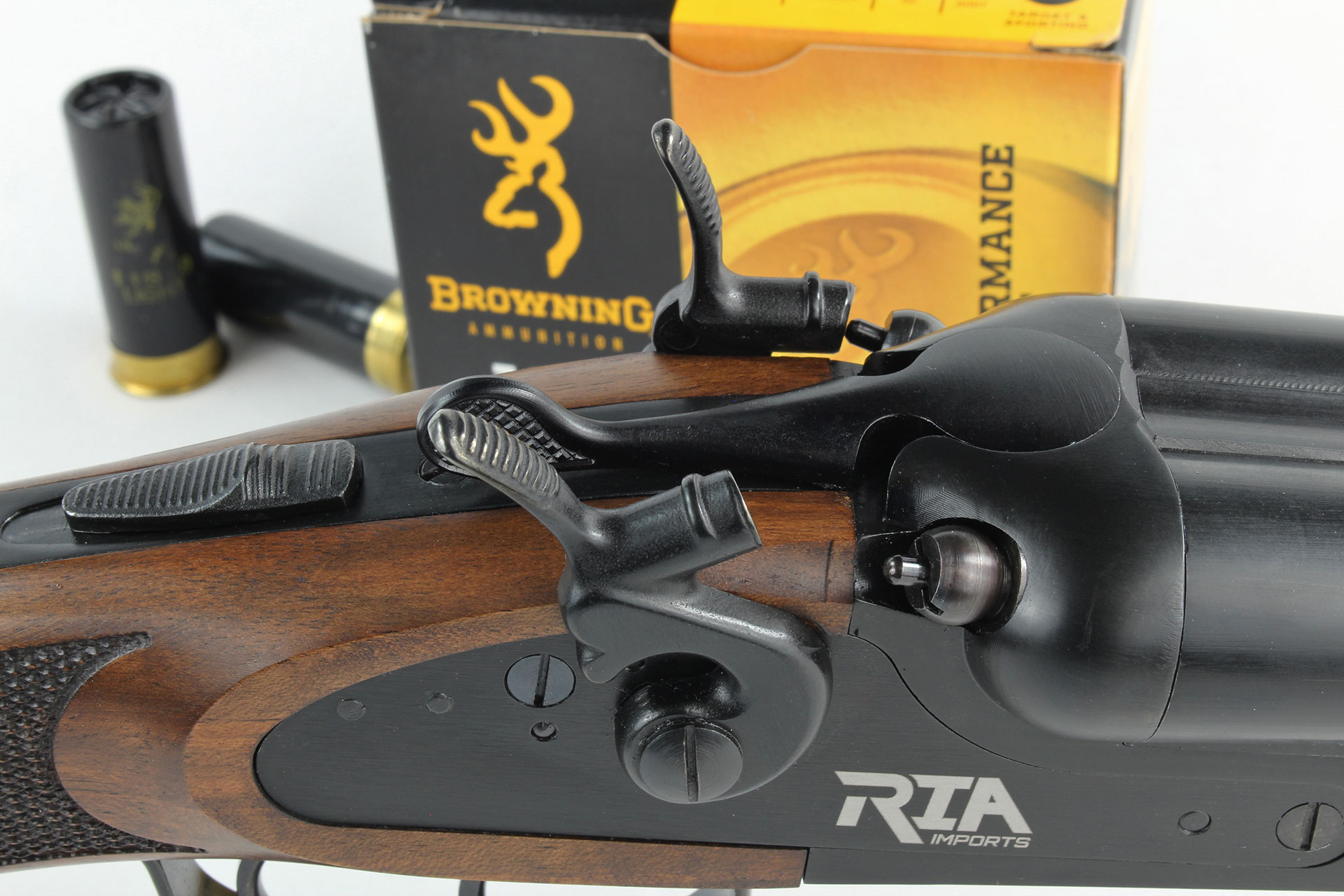 Moving onto functionality, I liked that the Side by Side was built with proof-tested barrels that are cut with 3” chambers. This means that the Rock Island Armory piece can handle not only your favorite target load but many magnum shells as well. This would open it up to far more use and take it out of the “shoot on special occasions only” category and put it neatly into the “let’s take it turkey hunting” category. Also to the tune of extended usage, the RIA comes standard with threaded barrels and a set of chokes to vary the pattern. This is certainly not the case in most antique models, as the buyer had to learn to accept the fact that they got what they got.

The aesthetics portion of the examination overlapped functionality to a great degree, something that I always appreciate. If we look at the exposed hammers and double trigger system, it should be a bit easier to understand this statement. On one hand, these are features that we look for when we are shopping for a sample to hang above our fireplace, but on the other hand, they help tremendously in the field as well. Exposed hammers have a certain degree of assurance to them, as there is no mistake when they are cocked. 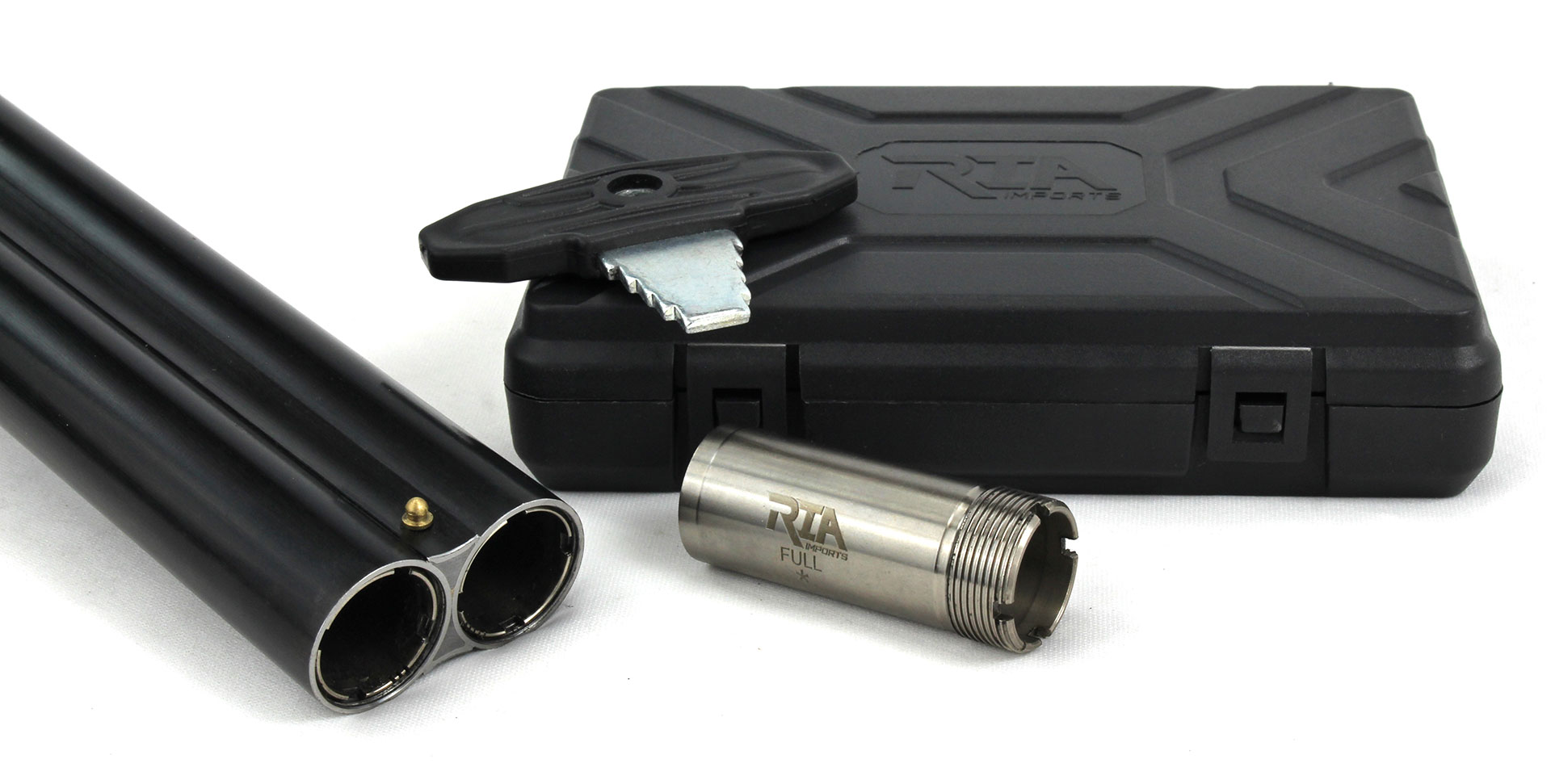 Furthermore, there is a bit of safety associated with this design, as one has the option of leaving it down until ready to fire, as they do not sit on the firing pin. Of course, as this is built to be modern, the cocked-and-locked method is on the table, too, as this side by side also features a push-to-fire tang safety. Turning our attention to the double triggers, most will agree that there is no faster method of barrel selection than simply remembering that the forward trigger fires the right barrel and the rearward trigger fires the left one. Couple that with an interchangeable choke system, and you have a handy little bird gun that can be dialed in to handle two completely different shooting scenarios.

I decided to test the Rock Island Armory Side by Side by shooting a casual round of clays using Winchester‘s #6 Super Speed Game loads alongside Browning’s #8 BTP Light target load.  In preparation for this activity, I screwed in the included improved cylinder and modified choke tubes, as they would give me my best patterns for these short-range targets. However, before making orange dust, I needed to see how this double-barreled shotgun stood up to its natural enemy: a shared point of impact. 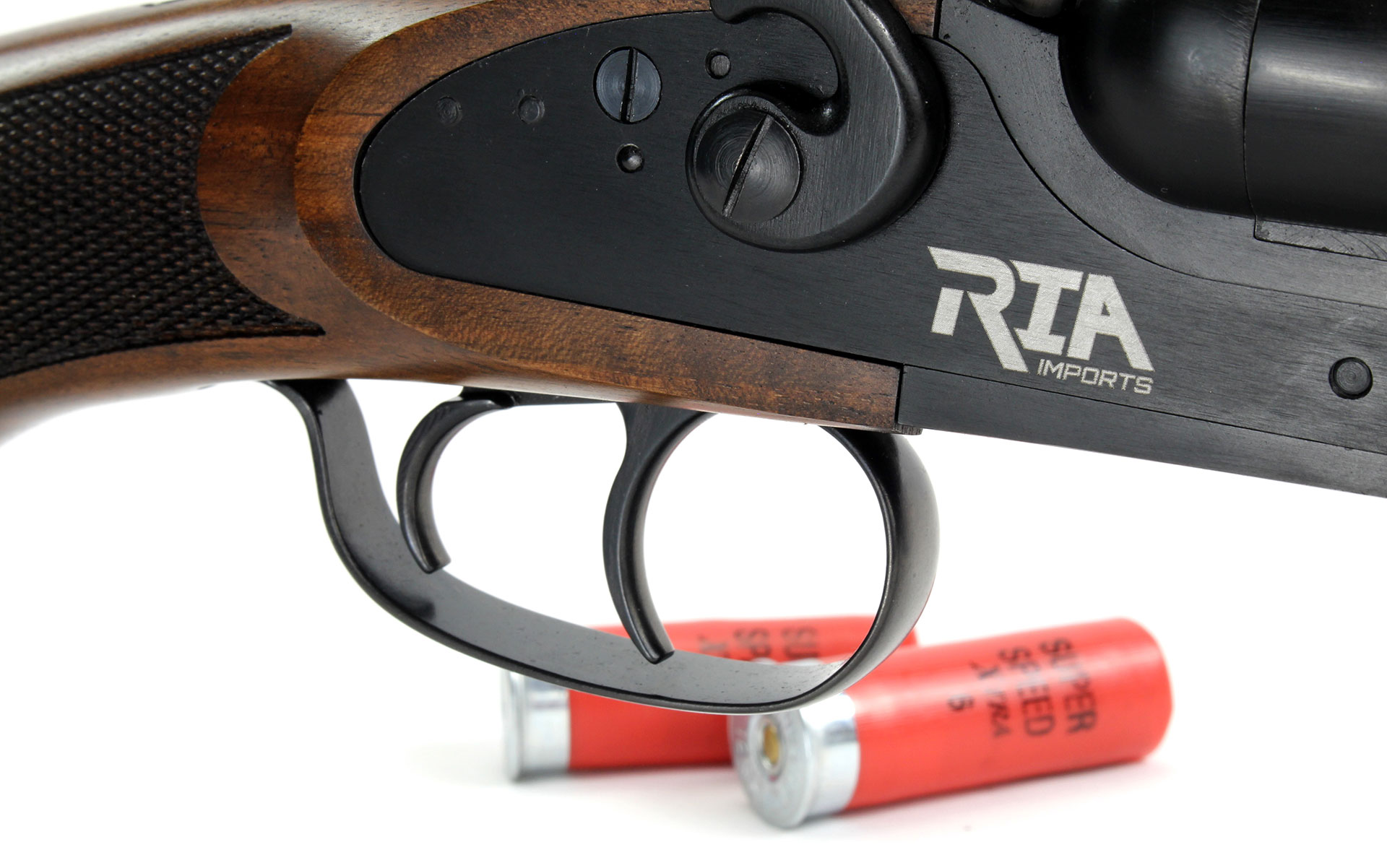 One issue that plagued the side-by-sides of yesteryear was that one barrel would shoot straight and the other one would send its pellets slightly off to one side. This was typically remedied with a touch of filing to help correct the shot pattern (another reason they were seldom choked). So, on a 40″ by 40″ piece of plywood set at 35 yards, I fired a shot of the Winchester #6 from each barrel and was pleasantly surprised. The modified barrel put a pattern neatly around my 2″ paster with four pellets striking the dot, and the improved cylinder added another two and enlarged the overall pattern proportionally.

As you might have imagined, it was a bad day for clays, as I was able to rack up as many breaks with this side-by-side as with any other shotgun from my cabinet, and I had a heck of a time doing it, too. I loved feeling the inherent swinging ability that these guns are known for, as well as bumping the empty hulls out of a cracked breech. The gun functioned just as it should and digested all of our ammunition without so much as a stuck case or a misfire. Admittedly, I did forget to cock the hammers a few times, because years of shooting conventional break barrels will do that to you, but I can’t fault hardware for what is obviously a software issue. 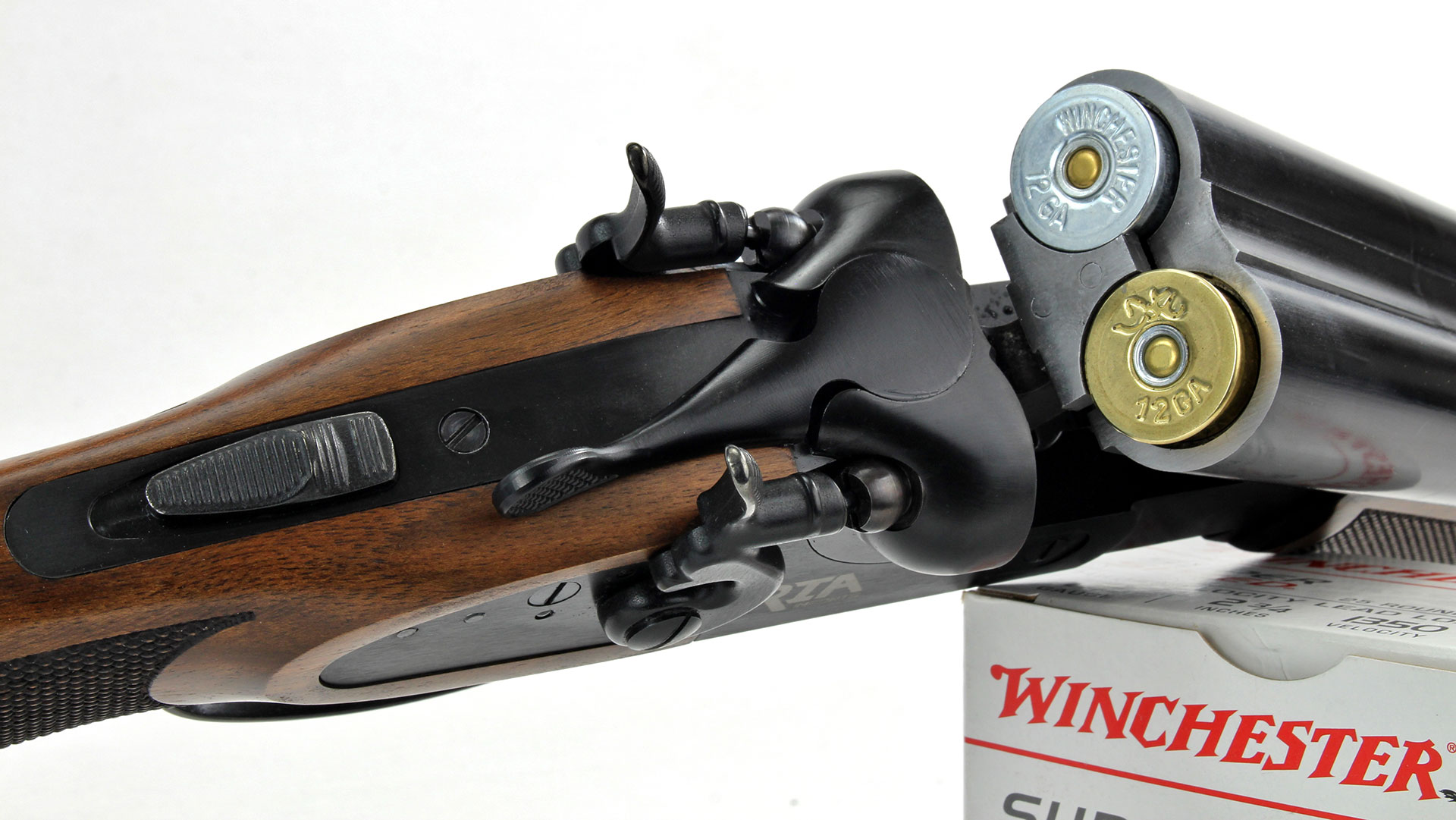 At the end of the day, I wiped the gun down with a lightly oiled cloth to preserve the receiver’s anodized finish, as well as the lustrous bluing that was applied to the barrels. From here, my only dilemma was if I wanted to remove the firing pins and hang it over the fireplace of our new home or keep it locked in the safe for the bird and squirrel hunts that would be in our future. Then again, at this price, nothing is stopping me from buying one for each purpose. For more information, visit armscor.com.

Rock Island Side by Side

NC: GOA WINS BIG AND RALLY TO PROTECT THE 2A

Review: Rock Island Armory Side By Side