SIG Sauer recently released two new pistol-caliber suppressors that are distinctly different in several ways from the company’s more established SRD series. The MODX-9, and its companion MODX-45, are made with 3-D printed titanium baffles instead of the SRD’s traditional design that uses stainless steel baffles stacked inside a titanium tube. The MODX cans are also fully modular, meaning the user can change the length of the suppressor one baffle section at a time. The most noticeable difference, however, is the MODX’s aesthetic departure from the SRD’s Spartan, utilitarian appearance that is of no consequence to government buyers who comprise a major portion of SIG’s suppressor sales. Government sales will still be a factor with the MODX-9, however, as it was selected as the standard-issue suppressor for the MK27 pistol used by Tier 1 warriors.

The MODX-9 tested here is designed for 9 mm pistols and rifles. The baffles are made of titanium while the piston and its encapsulator are made of 17-4 stainless steel. Titanium is extremely strong for its weight, but it degrades significantly at a lower temperature than stainless steel, so high-volume/long-duration firing should be avoided.

The MODX-9 has seven, 1.35-inch-diameter sections, each with an integral, vented-cone-type baffle. It can be configured between 3.25 to 7.75 inches long, with weights ranging between 5 to 8 ounces.  Each section is numbered from one to seven. The No. 7 section has an integral end cap and should always be used as the final section however you configure the can. A rubber ring inside the encapsulator tightly surrounds the piston to prevent gas leakage.

SIG Sauer’s 3-D-printed MODX-9 suppressor comes with two pistons and all the tools needed to change configurations • Direct attachment to standard-threaded barrels allows the MODX-9 to install quickly and easily • The suppressor can be user- configured in seven different lengths, with decibel reduction increasing with size.

SIG Sauer uses EDM (electrical discharge machining) to cut the bore after the baffle sections are screwed together, which yields precise alignment and is typically used only on rifle suppressors. When configured correctly, the baffle vents are aligned in a row, which allows gas to be stripped off the centerline of the bore more efficiently.

The threads of each baffle section have a tapered shoulder, which helps keep them from loosening and forms a tight gas seal that SIG assures us will prevent “carbon lock,” a condition caused by powder residue accumulating on the threads, which makes unscrewing the baffles difficult. Because carbon lock is an annoyance not uncommon with “screw together” suppressors, this feature is more valuable than it may appear. 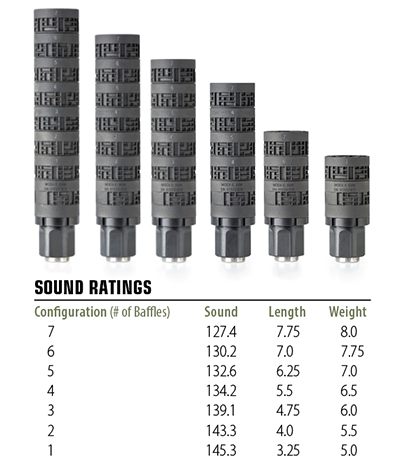 The MODX-9 is sold as a kit with two pistons having ½x28 and 13.5×1 tpi, left-hand thread patterns, two booster springs, two spanner wrenches for disassembly and a spacer for using the suppressor on fixed-barrel firearms. The extra booster spring is used with SIG Sauer P320 pistols, which have a slightly different slide-barrel unlock time.

I tested the MODX-9 in its longest configuration on SIG’s new P320 XCarry Legion using Winchester USA 115-grain FMJ and 147-grain WinClean loads. The WinClean load delivers subsonic velocity from pistol-length barrels and is good for suppressor use because its bullet has a fully enclosed base that won’t allow vaporized lead to accumulate inside the blast baffle as bullets with exposed bases invariably do. Its lead-free primer is also a factor.

SIG Sauer’s own sound ratings are shown in the accompanying table. My tests showed that the MODX-9 in its longest configuration gave equivalent sound reduction to SIG’s SRD-9 suppressor and edged out AAC’s very effective Ti-Rant 9 by 1.5 dB on average. The MODX-9 did exhibit first-round pop, but there was no objectionable back pressure felt on my firing hand or face using either load, something that varies considerably with the host firearm. None of the baffle sections became loose, and each disassembled without evidence of carbon lock. Adding the MODX-9 to the P320 affected accuracy and bullet placement; group size increased by about .5 inch and point-of-impact moved by 1.5 inches at 15 yards.

The P320 occasionally functioned sluggishly, with a few failures to return to battery followed by the piston seizing in the open position. This resulted from rapidly vaporized lubricant caused by the five large gas ports on the piston that direct hot gases into the encapsulator. Once I changed lubricants to a grease rated for higher temperatures and used it more frequently, function was perfect, even when the pistol was pointed directly downward (on a range designed for such tests) and fired with a loose grip—a test used by the DOD to gauge the effectiveness of a suppressor’s booster.

Projecting a new 21st century vibe, the MODX-9 should broaden SIG’s commercial sales to buyers who appreciate this suppressor’s modularity and futuristic looks. Aesthetic appeal aside, this suppressor offers solid sound reduction in a light-weight package.