Back in 2018, SIG Sauer revolutionized the concealed-carry market with its P365. This 9 mm micro pistol shook the industry through with its enhanced capacity magazine design and superb ergonomics, all without paying the price of additional bulk and heft. Although 9 mm Luger is by far the most popular defensive cartridge today, it isn’t for everybody.

Some shooters shy away from it because they feel the recoil is excessive, particularly in compact pistols, while others cite the slide as being too hard to rack. These quarrels are undoubtedly valid, particularly if one has dexterity issues. In that case, switching over to a smaller .380 ACP isn’t always the answer, as having less material to grab onto does not increase stability. What would solve the problem is a familiar platform that is easy to shoot, operate and carry, but chambered in the lighter .380 ACP cartridge. That’s exactly what SIG Sauer did with the P365-380. 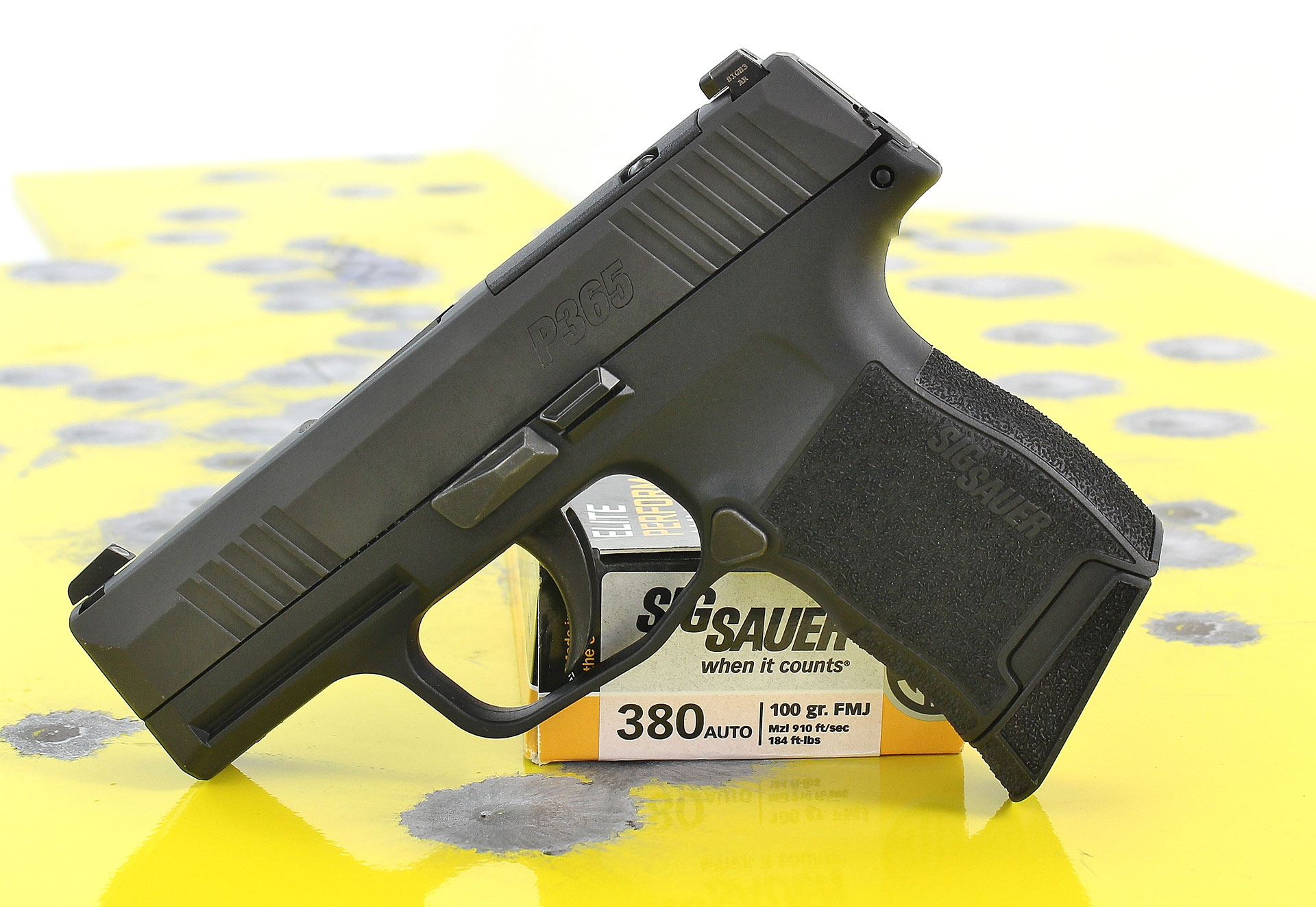 As the name implies, the New Hampshire company redesigned its best-selling P365 to fire John Browning’s iconic pocket-destined self-defense round. The P365-380 uses the same slide profile, grip-frame and fire control unit as its larger, older brother. For these reasons, the 9 mm and the .380 ACP chambered variants will have nearly 100 percent holster compatibility, making it a bit easier to own both guns and leaving your presentation virtually unchanged.

The grip module features aggressive grip texturing, a reversible magazine catch and a low-profile slide stop and takedown lever. On the top portion of the pistol, there are stark differences between this newest offering and those of years past. For starters, each P365-380 comes with a Shield RMS/RMSc slide cut, reflecting the unwavering movement toward carry optics. 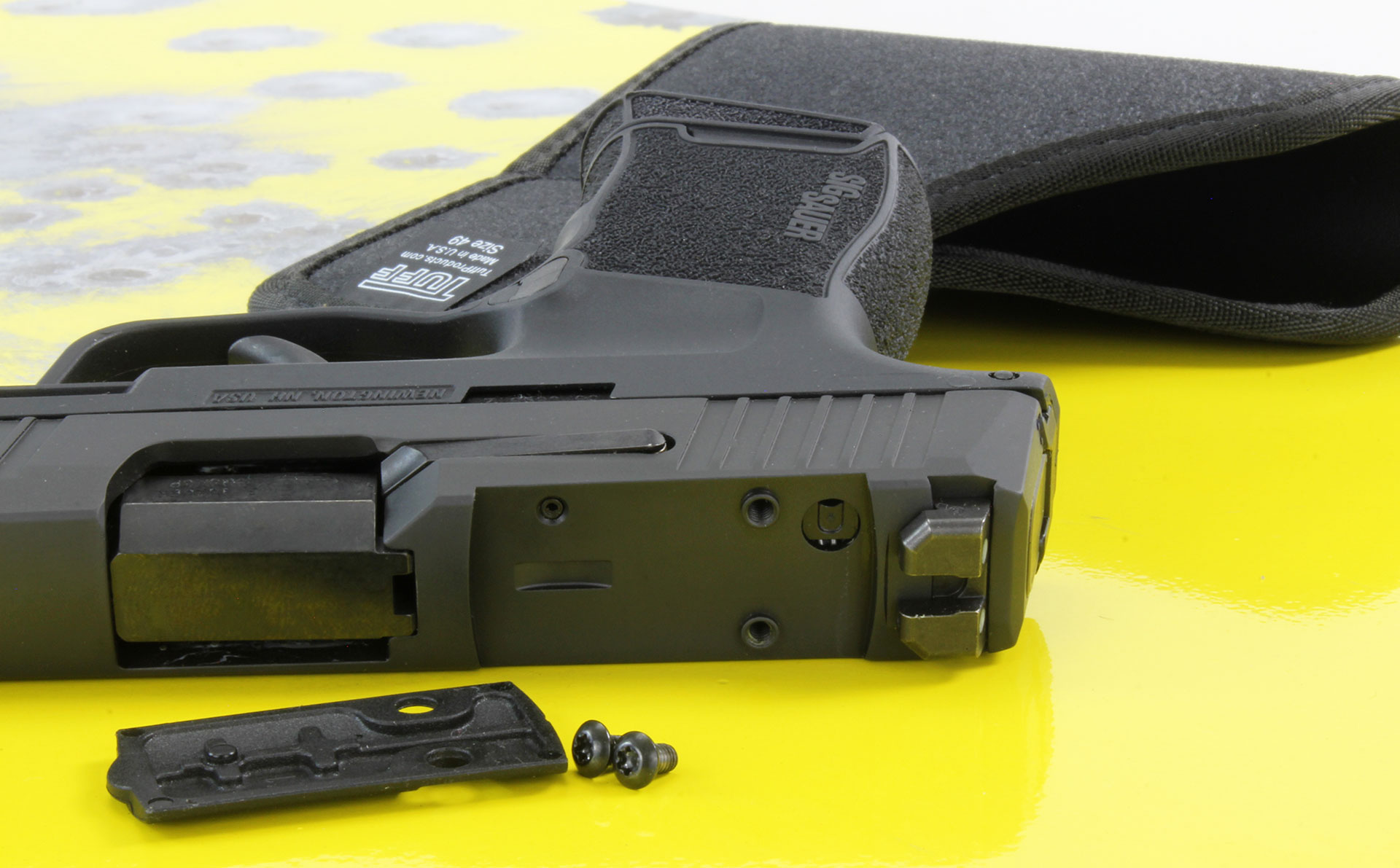 In addition, the slide features a set of drift-adjustable tritium SIGLITE Night Sights, for those that enjoy a more conventional solution to low-light engagements. Once removed from the frame, we can see that the slide assembly has but a few differences compared to the 9 mm version. The most noticeable changes are that the chamber is cut for the shorter .380 ACP cartridge, and this version is built with a lighter recoil spring and guide rod assembly, indicated by its red markings.

Before taking the new pistol to the range, I spent some time with it in my workshop to get a feel for the gun and take a few measurements. I started by ensuring the pistol was unloaded and then proceeded to examine the trigger. SIG Sauer retained the classic curved style bow in the P365-380 that most will find familiar and easy to press straight to the rear without disturbing their sight picture.

The trigger on my sample broke at an average weight of 6 lbs., 4 ozs., after a short take-up and hitting a thoroughly apparent wall. I liked that the trigger press was more deliberate than, say, one of the company’s match offerings, giving you a little more assurance should your finger slip during a life-or-death encounter. I also appreciated that the gun was devoid of a magazine safety, as dislodging the magazine during a struggle would essentially turn a firearm into a lightweight club.

Turning my attention to the rear of the gun, I noticed that SIG Sauer left the very top of the backstrap smooth, so as not to irritate the most sensitive part of your hand when firing. The same theory was applied to the area immediately under the trigger guard, as texturing truly isn’t needed in this area to keep a pistol from slipping. Lastly, I noticed that the slide stop was fenced in and immediately understood why. Shooters, like myself, build their grip up as high as possible, which tends to put our thumbs against this control. Under recoil, this pressure can activate it and inadvertently lock the gun open during a string of fire. After finalizing my inspection, I slipped the new pistol into a TUFF Super Tac Pocket Holster and headed to the range. 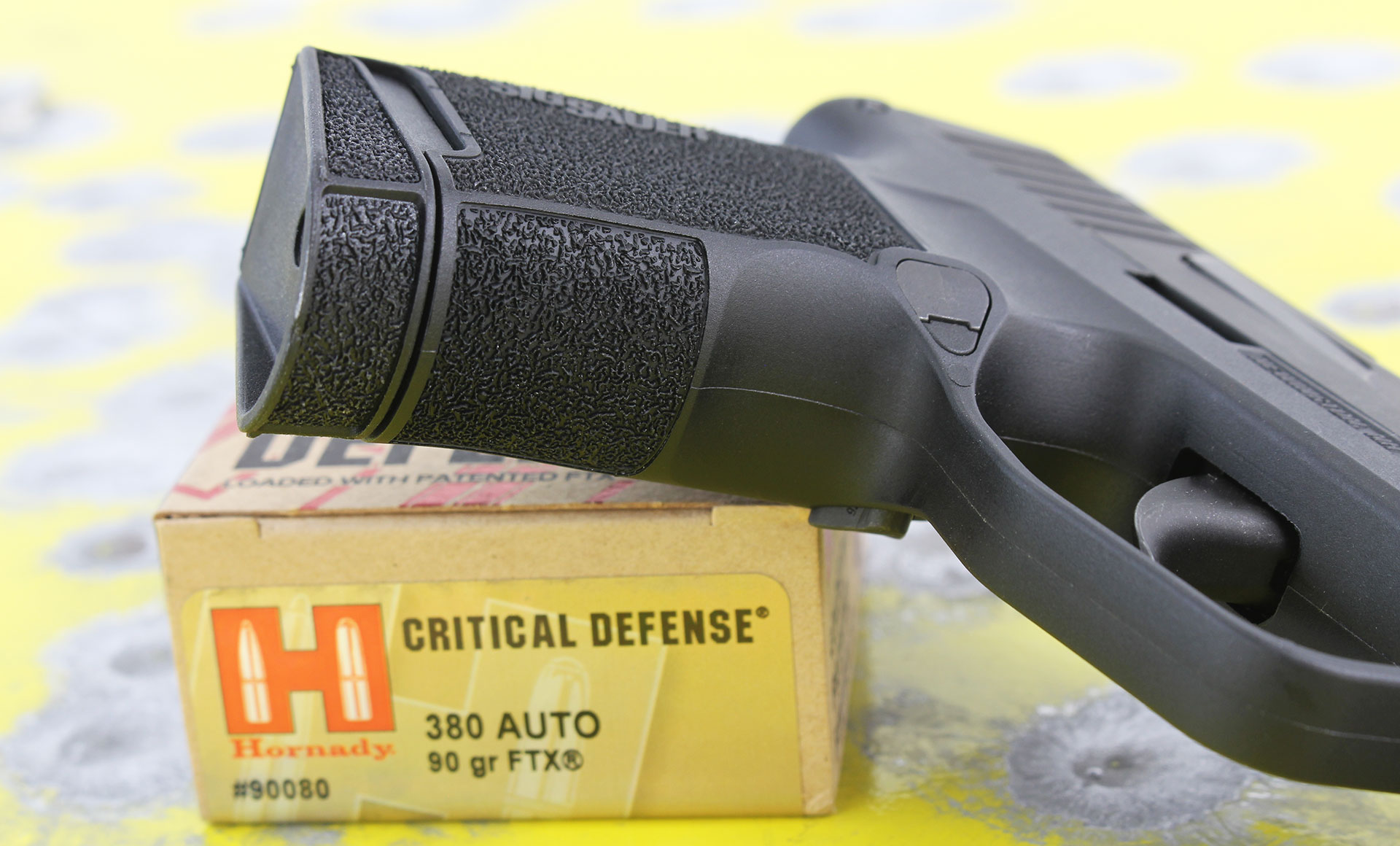 At the range, I intended to test the gun for accuracy, function, and shot-to-shot recovery. As I set up my shooting bench and prepared my magazines, I noticed that they were based heavily on the original. Using the same body and baseplate, SIG Sauer simply retrofitted the appropriate follower and a shim to accommodate the shorter, .380 ACP cartridge. Both of the included magazines held ten rounds and left me with the option of a pinky extension or flush-fit base.

Starting with accuracy, I rested the gun on a sandbag and fired five, five-shot groups from 7 yards. My test loads consisted of Hornady‘s 90-grain Critical Defense ammunition as well as SIG Sauer’s 100-grain FMJ training fodder. Both of these rounds fed, fired and ejected flawlessly and produced some impressive groups. Hornady’s offering delivered groups as small as 1.21″, with an overall average of 1.98″, only to be bested by SIG Sauer’s loading with a best group of 0.74″ and an average of 1.41″. While the consistency was certainly eyebrow-raising, the gun’s pinpoint zero truly grabbed me. Sadly, defensive pistols often reach the consumer with sights that are merely dialed to “minute-of-man.” Sure, that’s effective for its intended use, but it leaves you a little short for training and practice. 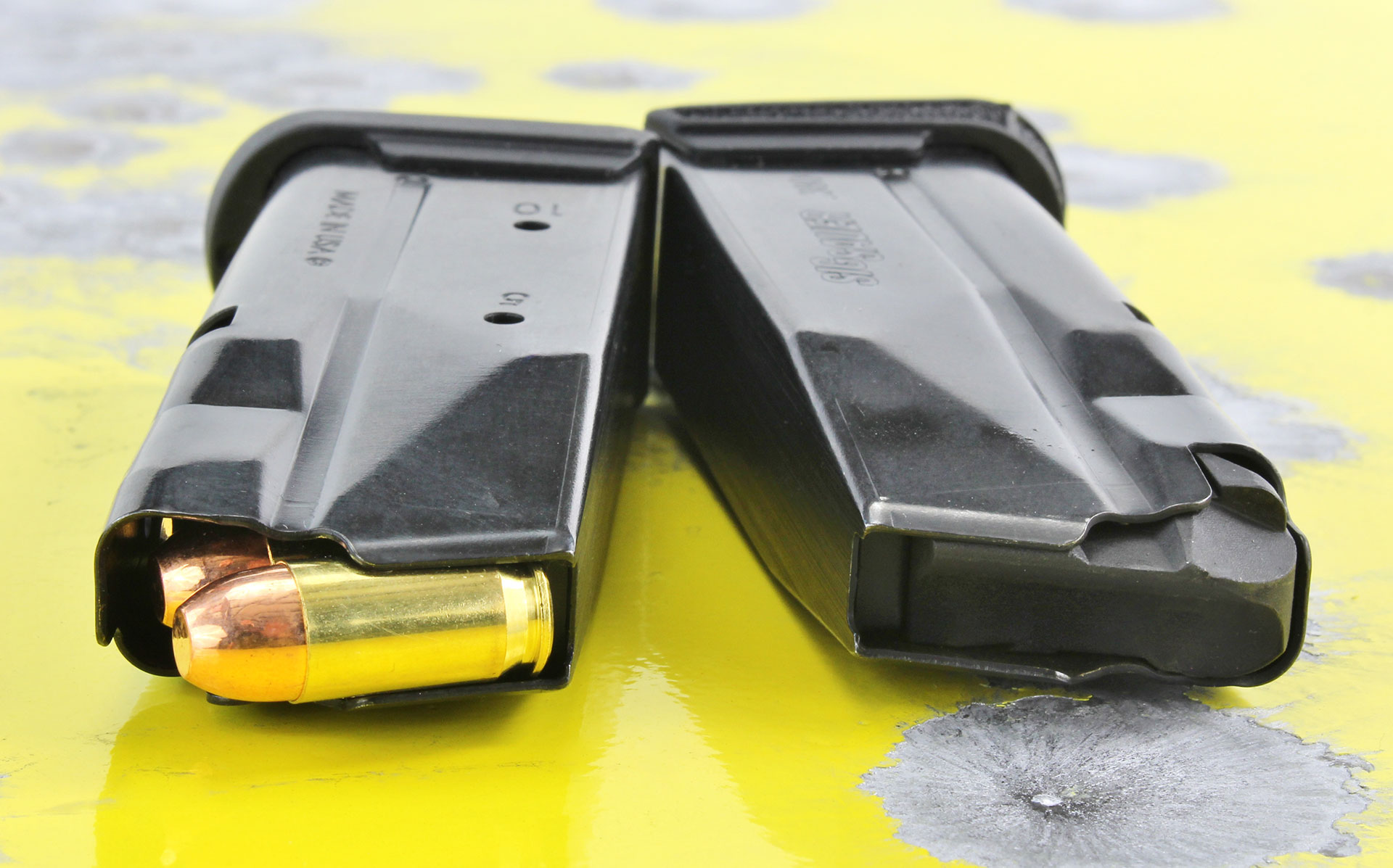 With the formal accuracy test behind me, it was time to put the gun through some practical applications to test the “more shootable” claim. From varying distances, I put approximately 100 rounds onto a full-sized Caldwell IPSC through various drills. It was here when I most appreciated the caliber, as it was light to shoot and yielded split times as low as 0.18 seconds.

The extra meat on the gun made it a pleasure to shoot, as did omitting that texturing from the areas most prone to rub the softest of skin. On-the-fly reloads were fast and instinctual, and I found that both magazines dropped free without any encouragement. Racking the slide was indeed noticeably simpler on the .380 ACP version, showing me that the engineers certainly spent some time figuring out just how light they could get away with without compromising function. 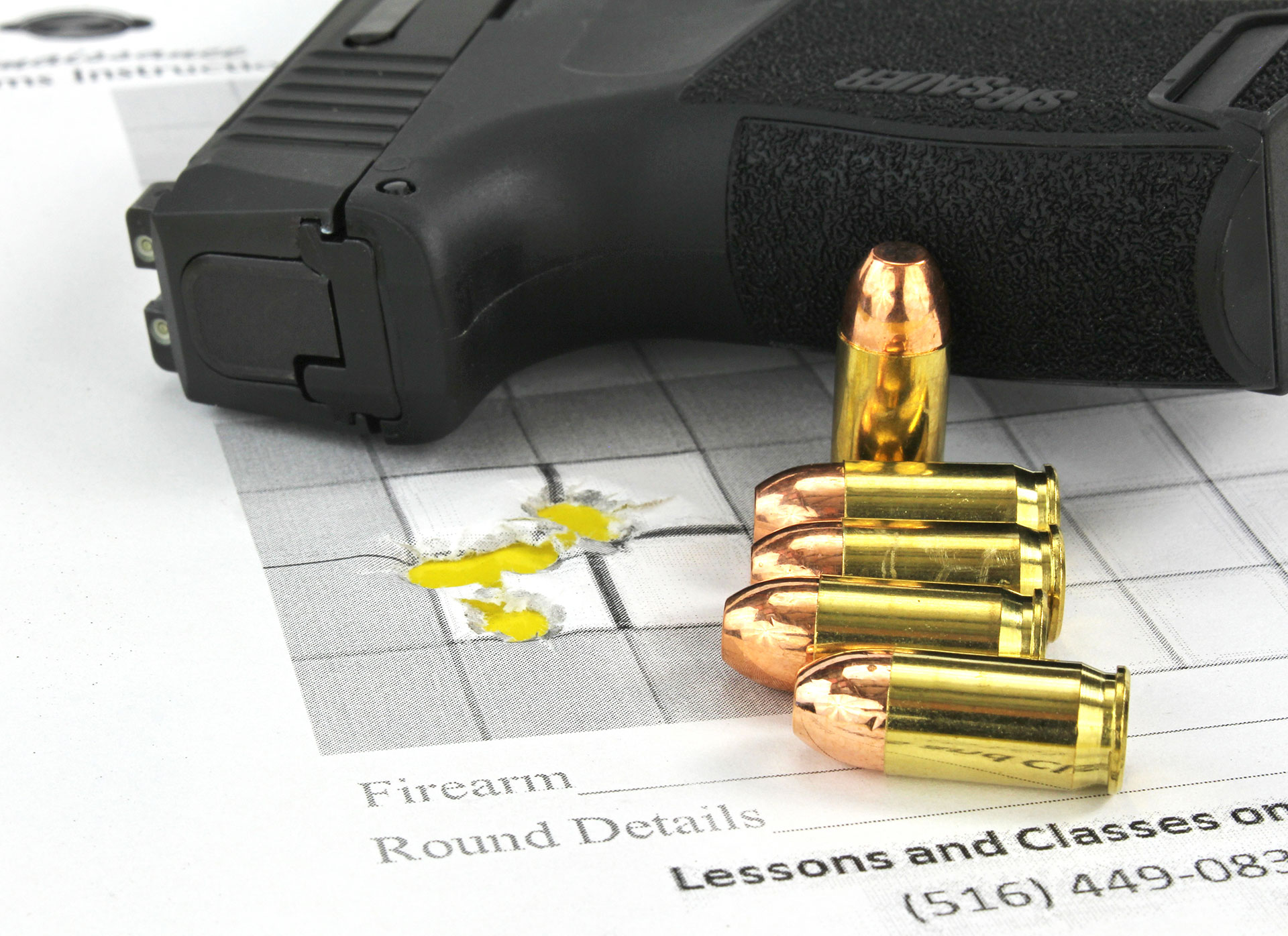 I wrapped things up with a quick field strip and wipe down with CLP before filling up a magazine and carrying the pistol home. A little bit of me wished I had a few more boxes of .380 ACP on hand, because the gun was a whole lot of fun to shoot. I enjoyed its accuracy, even to the point of making 25-yard headshots on the Caldwell steel IPSC and its soft recoil made it effortless to put box after box of ammunition downrange. Overall, I was extraordinarily satisfied with what SIG had accomplished and found the P365-380 to be a terrific option for concealed carry with a side of target practice. For more information, visit sigsauer.com