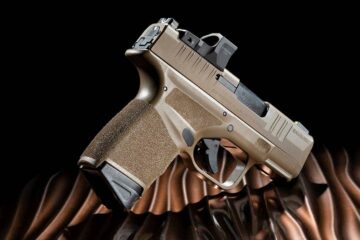 August 12, 2022 Guns In The News
Home»Guns»Ruger ARX Ammunition — It’s Wicked Look Is Only Surpassed by Its Performance
Guns

Cheaperthandirt – Ruger is branching out into products other than firearms. First knives and now ammunition. The branded ammunition is produced for Ruger by Polycase. The load feature an advanced nonexpanding bullet offering an advantage in wound ballistics compared to full metal jacketed ammunition. Ruger offers an interesting concept with its ammunition line that is well worth a day or two at the range.

The .380 ACP has been fertile ground for ammunition development. The ability to drive a jacketed hollow point bullet fast enough to offer both penetration and expansion may not rest with the .380 ACP. To achieve adequate penetration is possible and good expansion is possible. However, seldom are those qualities possible with the same .380 ACP loading. As a result, many authorities recommend full metal-jacketed bullets in this caliber to ensure adequate penetration and to offer reliable function.

Ruger’s ARX load uses a uniquely fluted bullet of copper and polymer composite. The bullet is a lightweight for the caliber in every offering, which means high velocity. This translates to high energy for the caliber. The light bullet also recoils less than a heavier bullet. Moreover, even though the bullet isn’t designed to expand, a light bullet isn’t going to penetrate excessively compared to a FMJ bullet. In order to test the Ruger ARX .380 ACP loads, I used my personal Beretta 84, a double-action first-shot high-capacity pistol and among the most accurate .380 ACP handguns ever manufactured. I also used the popular Ruger LCP as a test bed. Minute of cranium accuracy is possible at 15 yards.

I entered into the test with an open mind. I do not accept energy dump or wave theory as a reliable ‘mechanism of collapse’ whatever that means. There is a lot of junk science in the press. Only actual damage means anything to me. Even if that damage is severe, it doesn’t mean much unless it covers a vulnerable area such as the arterial region or nervous system. Blood loss causes the body to shut down.

The ARX bullet is designed to displace tissue by fluid movement or hydraulic pressure. Hydraulic pressure is proven as this is what opens the nose on a hollow point bullet. Let’s get this out of the way- during the test period two hundred rounds of Ruger ARX 380 ACP ammunition functioned without a single failure to feed, chamber, and fire or eject. Even though the projectile weighs but 56 grains, I was surprised at the high velocity. The Beretta demonstrated 1320 fps and the Ruger LCP 1255 fps with the ARX load.

Typical 90-grain JHP loads in the caliber will exhibit 950 fps in the Beretta. The lightest conventional JHPs will break perhaps 1,000 fps so the ARX is a speedy loading. Fast, but with light recoil which is always a plus. The majority of the rounds were fired in the Beretta 84 as this is a much more interesting handgun. It isn’t a hideout by any means but it is more accurate than most service pistols and an interesting test bed for .380 ACP loads.

I fired a number of rounds from a solid benchrest firing position at 15 yards. On occasion, the Ruger ammunition cut a single ragged hole. Average groups for 5 shots were 1.1 inches. This is an accurate handgun. Accuracy potential and reliability are confirmed. The flutes do not affect the travel of the bullet in the air, as expected. An important point is that these are not frangible loads. They do not break up on impact with walls and such. They are solid polymer and copper, not sintered metal frangible loads. This is good as they are service grade useful. The Beretta .380 and Ruger ammunition were a good combination.

A true frangible is useful for practice only. [Editor’s note: this is a personal opinion of the author and left in the story as such.] As an example, on several occasions I have suffered a fracture of the frangible bullet in the feed ramp of the firearm. Not often, but more than a few times. The bullet once cracked and left the nose of the projectile in the chamber of a pistol as I unloaded the handgun. Frangibles are a great training resource but not for service use. The Ruger ARX load isn’t the same thing. The bullet is solid.

The accuracy reliability and light recoil of the loading was impressive. It was a great excuse to get the Beretta out and going. Next, I moved to ballistic testing. I do this the proven way by shooting wet newsprint or water. Neither is gelatin but then gelatin is a means of comparing bullets and not a close approximation of living tissue. Water is consistent and may be used to compare loads. On average, the ARX bullet penetrated 11 to 12 inches of water.

This is adequate for a personal defense loading. The bullet never deformed and was recovered in the third water jug on average. As for improved ballistics over hardball this wasn’t difficult to qualify. Full metal jacket factory .380 ACP loads generally will penetrate 24 inches of water. A JHP load may penetrate as little as 6 inches although the better loads—with less expansion—may approach 10 inches. Firing off hand recoil was light with the Beretta .380 and Ruger ARX ammunition.

The qualifier is the effect on the water jugs. There was considerable energy transfer evident as the jugs burst and water rained out. FMJ loads are less dynamic. I believe the Ruger loads offer a counterpoint for those recommending only deep penetrating FMJ loads in the .380 ACP caliber. The ammunition is reliable, clean burning, and accurate. Shot placement will mean the most, but these loads are a meaningful improvement over hardball ammunition. They are also legal in those few jurisdictions in which JHP bullets are prohibited.

View all articles by Bob Campbell Accuracy is more than adequate for personal defense. This is a rapid fire group at a long 25 yards.