It’s no secret that South Carolina Senator Lindsey Graham gleefully takes every opportunity to stab gun owners in the back. 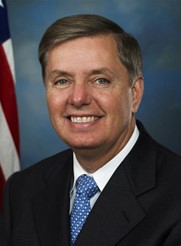 You may recall his latest betrayal was his strong support for the misnamed “Bipartisan Safer Communities Act,” which is a nasty gun control bill that includes a bribe pot for Red Flag gun confiscation laws, a backdoor for Universal Background Registration Checks, and delays/denials for young adults.

However, conservatives in South Carolina are not tolerating Senator Graham’s sell out any longer.

The Horry County Republican Party has stepped up and censured Graham for his vote for gun control. (You can read their resolution here and here.)

This effort is very commendable, and it sends a powerful message that Graham has a responsibility to not only the people who elected him, but the Constitution he swore to protect.

Nonetheless, the momentum must continue. We need the South Carolina Republican Party to censure Graham for his sell out.

So, if you’re a member of the Republican party, please contact them to pass a similar resolution to Horry’s. Please use the following as a springboard for your message:

I call on the South Carolina Republican Party to censure Senator Lindsey Graham for recent gun control vote (S. 2938). SCGOP’s platform supports the Second Amendment by stating, “We believe in the individual, constitutionally-protected right of the people to keep and bear arms for security and defense of self, family, others, property, or the state, as well as for other lawful purposes.” But Senator Graham has backstabbed both his party and gun owners by voting for this bill. Among other gun controls, this new law includes a federal bribe pot for Red Flag gun confiscation, a backdoor for Universal Background Registration Checks, and delays/denials for young adults wanting to purchase firearms. Please hold Senator Graham accountable by following Horry County’s lead and censuring him.

GOA IS FIGHTING BACK AGAINST FEDS WHO ARE DRUNK WITH POWER