June 30, 2022 Guns In The News
Home»Commentary»Shooting The Icons Of An Empire: Victorian Riflemen Springtown Match
Commentary

Shooting The Icons Of An Empire: Victorian Riflemen Springtown Match

Unlike what you hear at most marksmanship competitions, where the crack, boom and rattle of gunfire sounds pretty much the same, the reports of the guns fired at the annual “Victorian Riflemen” matches in Springtown, Penn., are anything but consistent. While the match focuses on firing Martini-Henry rifles in .577-450 caliber and Snider rifles in .577 caliber, the participants (about 40 for this event) bring a fascinating array of mostly original firearms of the latter half of the 19th century, with most of the guns having a connection to the “Tommy Atkins” of Queen Victoria’s empire. 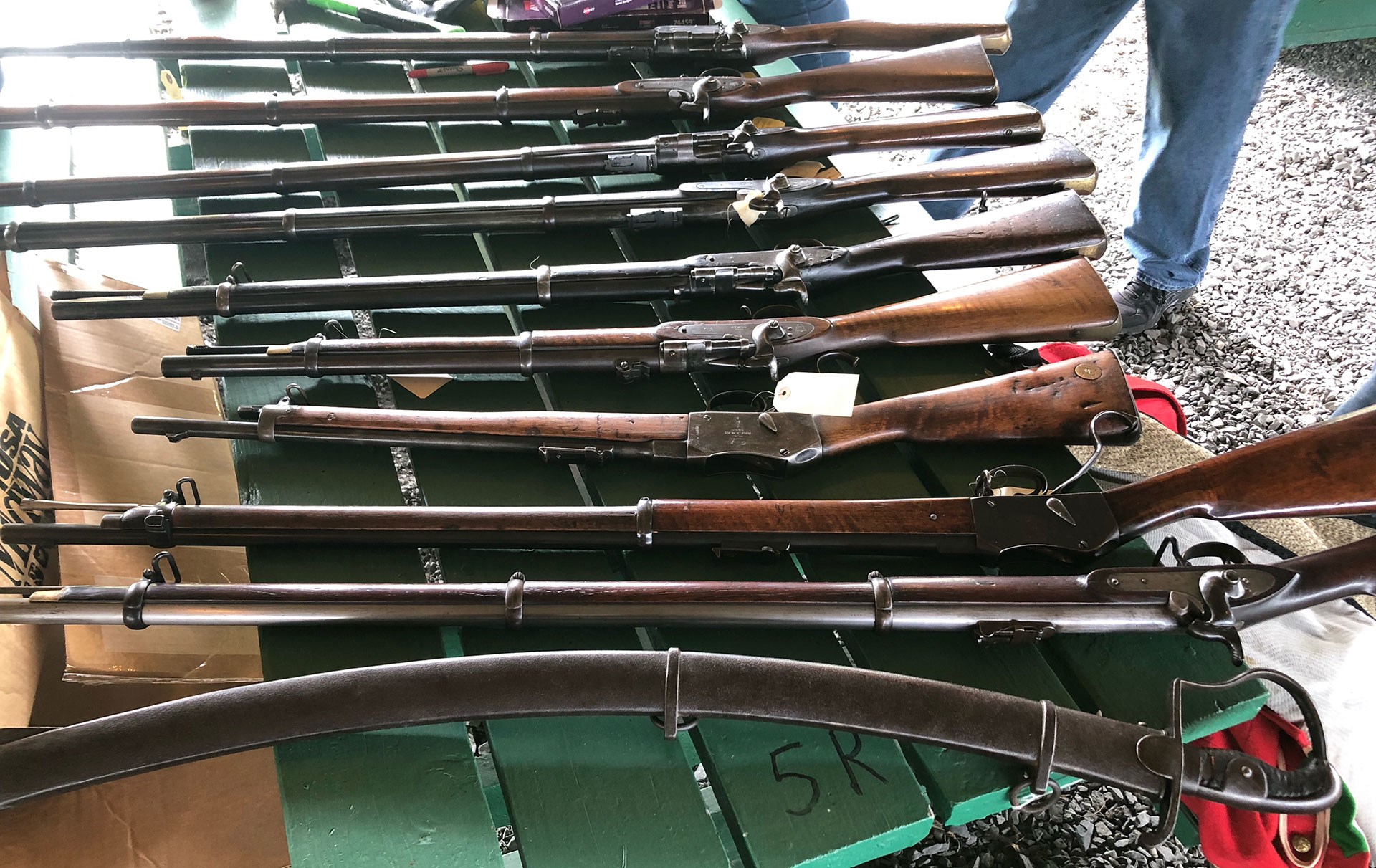 Many of the participants brought an array of period firearms with them and displayed the guns on the range’s tables, although the emphasis was on Martini-Henrys, Martini-Enfields and Sniders.

Indeed, in addition to the shoulder arms fired by British soldiers across the globe in the Victorian period, the guns fired at Tommy—German, French and American single-shot blackpowder breechloaders—are definitely in evidence, as are also a wide variety of period handguns.

Sponsored by the internet’s British Militaria Forum (founded in 2002 and with members on six continents), the event started as a North American homage to the classic target matches of Wimbledon and Creedmoor of the 1880s and the British Imperial and Trafalgar meets that are still held today. Despite the interruption of the COVID-19 pandemic, it has continued to grow. While the group’s flagship match is in Alberta, the Springtown, Penn., gathering, now in its eleventh year, is the largest. Other meets have been held in California, Texas, Virginia, New England, Montana and Kentucky. 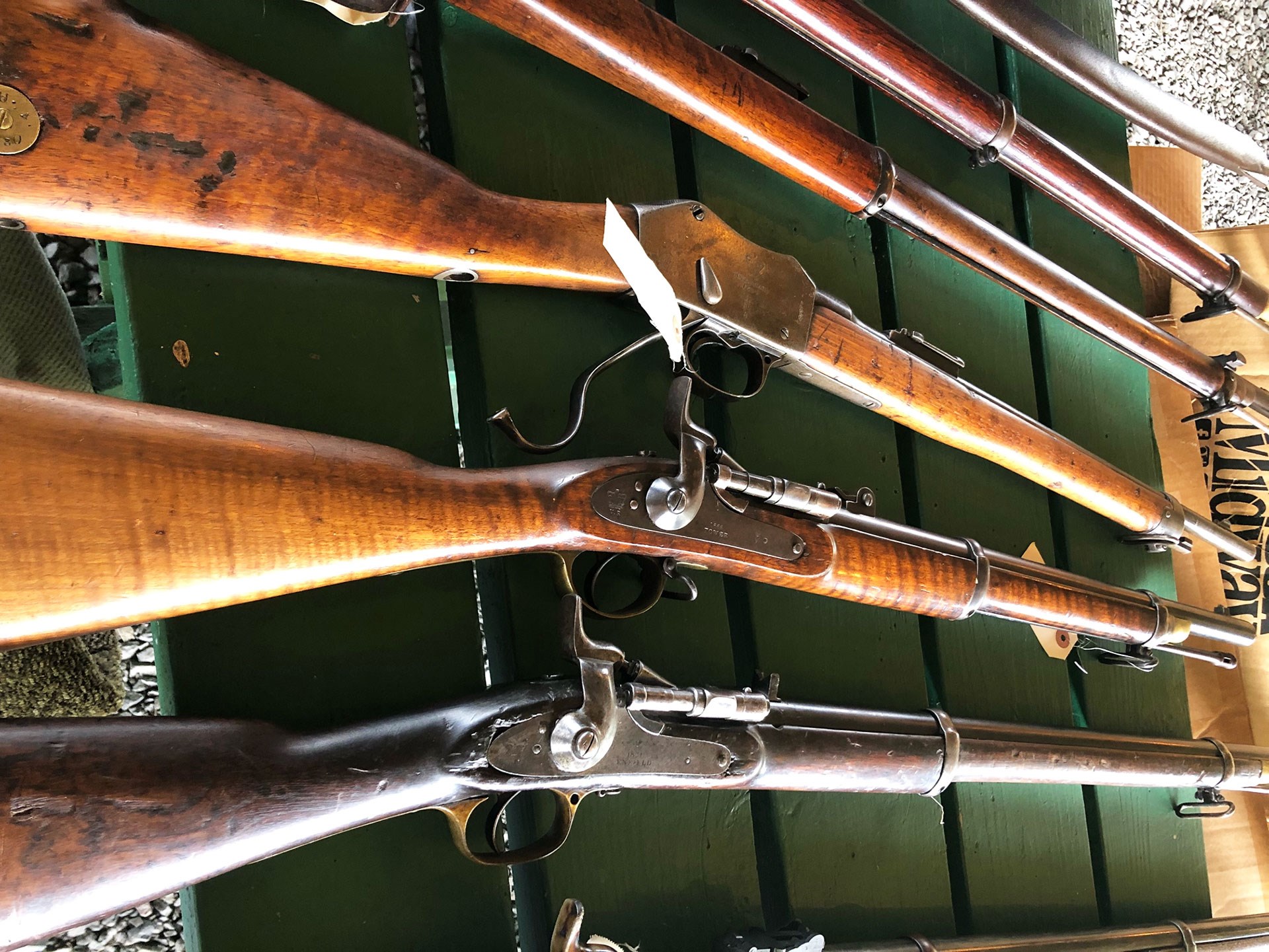 Sniders of all makes, models and configurations were evident throughout the competition.

Although most of the participants in the October 2021 match hailed from east of the Mississippi, there were some from the West Coast, and in the past, shooters have come from as far away as Europe and Australia. Travel restrictions prevented some of the overseas “regulars” (many of them internationally recognized authorities on these firearms) from attending the 2020-2021 matches. While some shooters kit themselves out in appropriate replica British Victorian military uniforms, most of the members at least make a nod to the period by donning a Glengarry—the Scottish cap that was adopted as a fatigue cap by most of the British army at the time of the 1879 Zulu War—or another piece of British late 19th-century headgear. 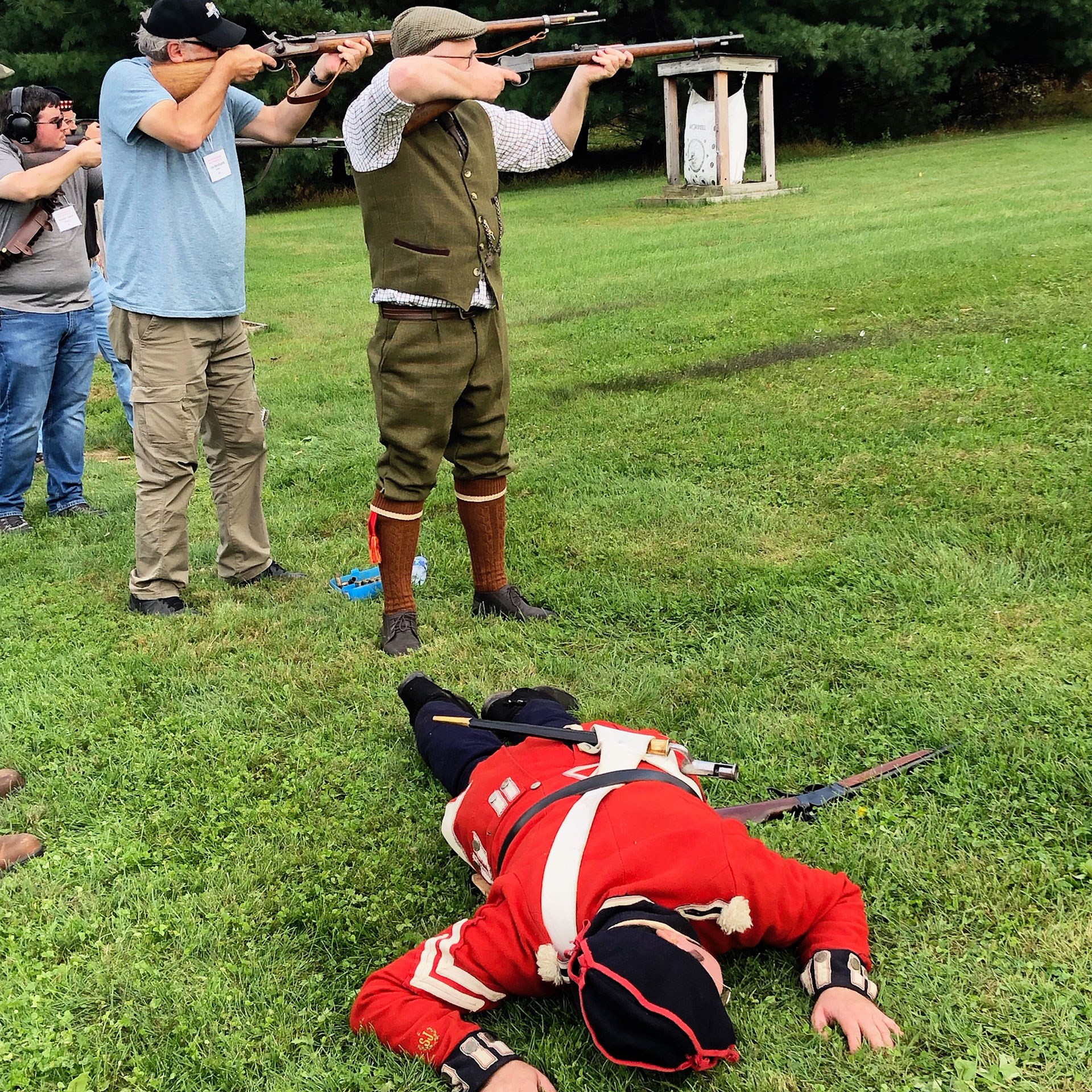 While some participants in the “Victorian Riflemen” competition were garbed in British military kit, most wore modern civilian clothing, and one shooter dressed in period civilian attire while shooting his Martini-Henry. The “skirmish” team match required “out” shooters to drop out of the firing line—which this contestant took literally!

Although there are some serious shooters at the event who pride themselves on their shooting abilities, many of the attendees are there for a variety of other reasons: fellowship, sharing information about reloading obsolete ammunition, gun restoration or replication and firearm history. Aside from the initial slow-fire 100-yard “provincial match” (13 shots, with 10 counting for score), events for smoothbore muskets and other designated arms, impromptu “plinking” events at the far end of the firing line, the main event was the “Skirmish.”

This contest is a team match (with some fairly convoluted—but fun—rules) in which two teams of 10 contestants each fired at a series of breakable targets at three progressively closer distances to give the feel of massed rifles against a charging enemy. Putting 38 rounds of Martini-Henry .577-450 downrange, in one match and at rapid fire, is beyond fun! 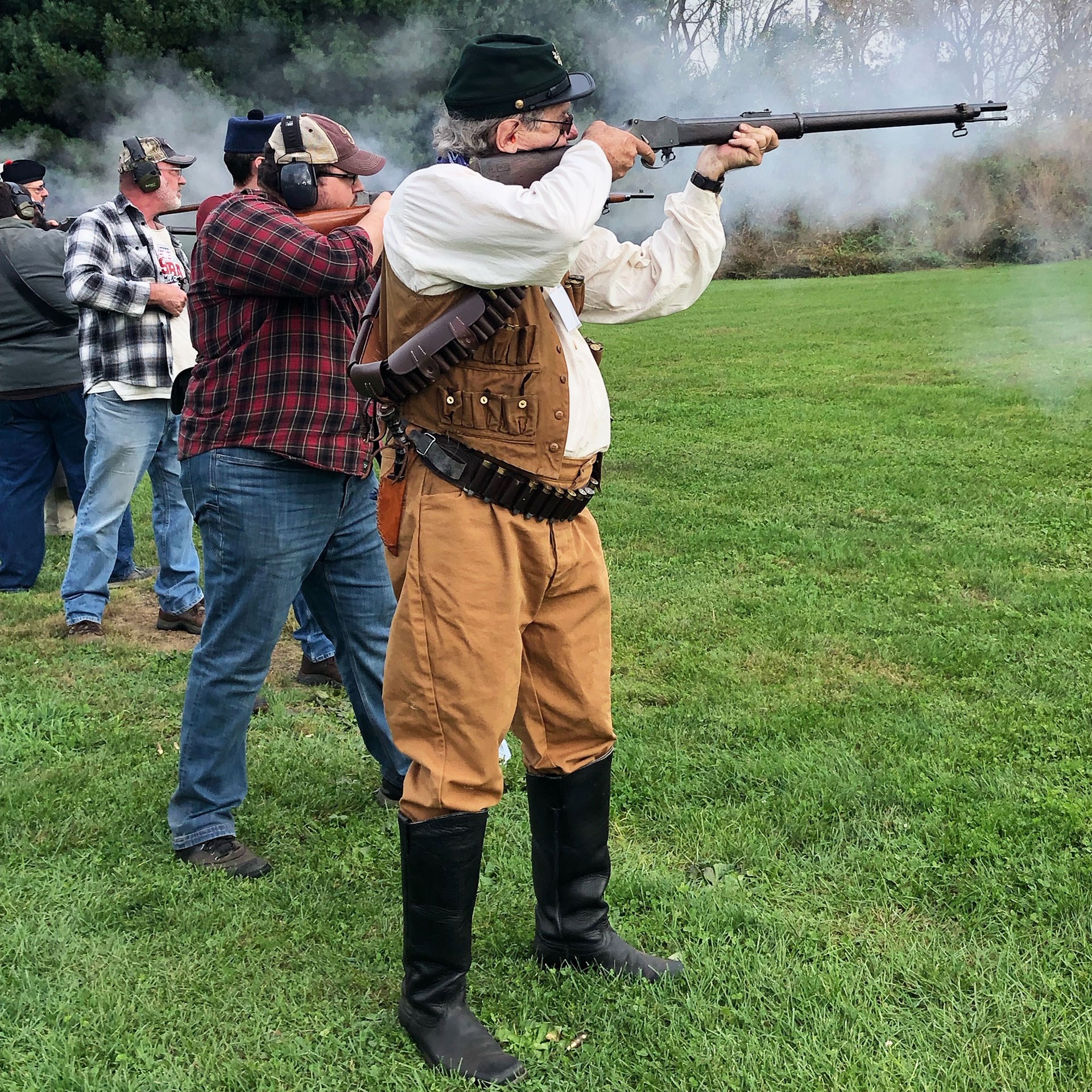 Even the “OPFOR” (opposing forces) were represented, like this Boer who exchanged his usual slouch hat for a green Fenian kepi during the “skirmish” match.

Preceding Saturday’s match at the Springtown Rod & Gun Club (an enjoyable jaunt over the hills to the south of Easton, Penn.), some of the attendees met for dinner at a nearby colonial-era stone tavern on Thursday evening. The next day, dozens of participants drove to the offices and warehouse of International Military Antiques in Gillette, N.J., where the owners (Christian Cranmer and his son, Alex) and their staff not only graciously hosted a luncheon on the lawn, but opened their facility to the Victorian Riflemen for an all-day “shopathon,” during which the visitors purchased antique guns, gun parts and associated militaria.

Several attendees later hosted a delicious dinner at the Springtown clubhouse that evening, featuring authentic cuisine from British India’s (now Pakistan’s) “Northwest Frontier” province and home-brewed Irish stout. Friday’s events were topped off by impromptu get-togethers at the motel in Easton where many of the participants were staying. 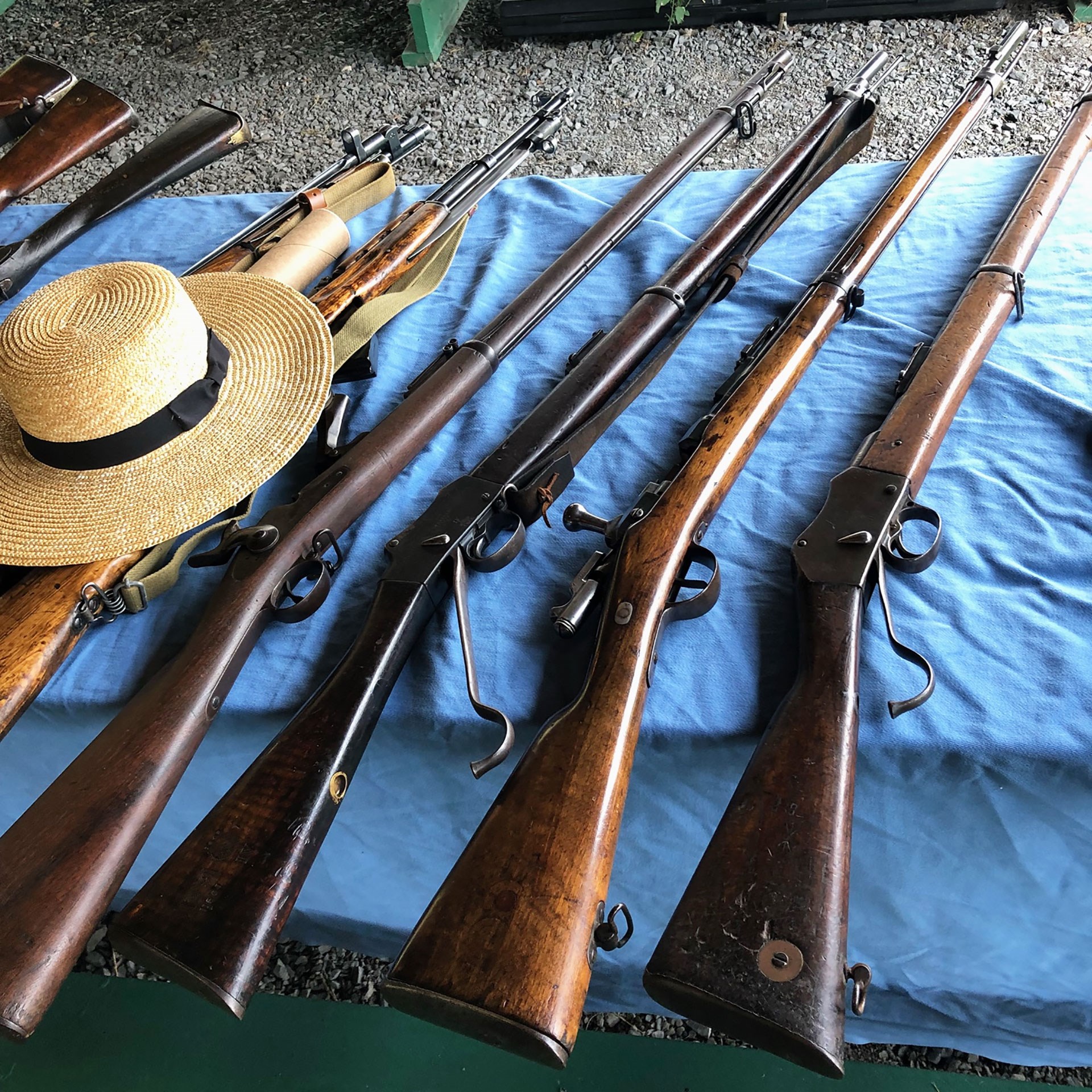 Not only were British and German rifles in evidence, one participant brought a French Gras rifle for the “plinking” section of the range, in addition to an American “Trapdoor.”

At the end of Saturday’s match, and after a brief retreat ceremony in which flags were lowered to the tune of “Men of Harlech,” all of the participants were treated to a real Pennsylvania dinner of stuffed cabbage in the range’s clubhouse, after which they listened to a presentation about the discovery of a historically-significant Canadian Spencer rifle from the Fenian Raid of 1866.

The next Victorian Riflemen match, in March 2022, marks the 20th anniversary of the British Militaria Forum and is a special event, in addition to the annual fall shoot. All interested parties are welcome, and if one does not have a British single-shot rifle, someone will no doubt provide one, with ammunition and instructions for its use.

Upgrades for Your Shotgun

Shooting The Icons Of An Empire: Victorian Riflemen Springtown Match