There are two important numbers to consider when talking about the advantages of bullpups. In the case of the new Springfield Armory Hellion, that’s 28.5″, which is its overall length, and 16.25″, which is the length of its barrel. To put those numbers into perspective, the gun’s length overall is about the same as an 11.5″-barreled Colt Commando short-barreled rifle with its stock fully collapsed. In fact, when mounted to the shoulder, the Hellion doesn’t extend as far as a handgun held in an Isosceles shooting position. And that extra 4.75″ in barrel length gets you about 13 percent more velocity and an additional 250 ft.-lbs. of muzzle energy from a 62-grain M855 bullet compared to the Colt Commando. Maximizing ballistics in a compact package is the bullpup’s modus operandi, and Springfield has jumped into the bullpup fray with a unique design that is both battle-proven and innovative. 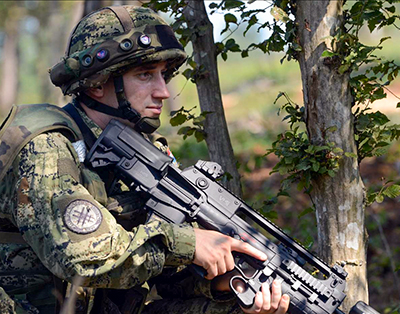 A soldier from the Croatian Armed Forces participates in exercise Immediate Response in 2016, armed with an HS Produkt VHS-2 bullpup rifle equipped with a 40 mm grenade launcher.

The Hellion’s origin began in the 1990s when the newly independent nation of Croatia started looking for a national service rifle. A private company, I.M. Metal, took up the challenge. It began working on designs that started off with a bullpup version of the AK-47 and went through delayed-blowback and direct-gas-impingement systems before settling on a short-stroke, gas-operated system.

By the early 2000s, Croatia had begun looking to join NATO and needed a rifle in 5.56 NATO to conform to that organization’s standards, and the country’s finalized design would be chambered for that cartridge. The VHS bullpup was launched in 2007 and officially adopted by the Croatian military two years later. Like the company’s HS2000 pistol that would evolve into the Springfield XD, the VHS took the best elements of existing designs—in this case the FAMAS, Steyr AUG and H&K G36—and combined them into one firearm. An updated version, known as the VHS-2, was launched in 2013. Featuring a more modular design that is fully ambidextrous, it has been adopted by other Eastern European and Middle Eastern countries and has seen combat use in Afghanistan by Croatia’s NATO contingency and on the Iraqi-Syrian border with Iraq’s special operations groups. 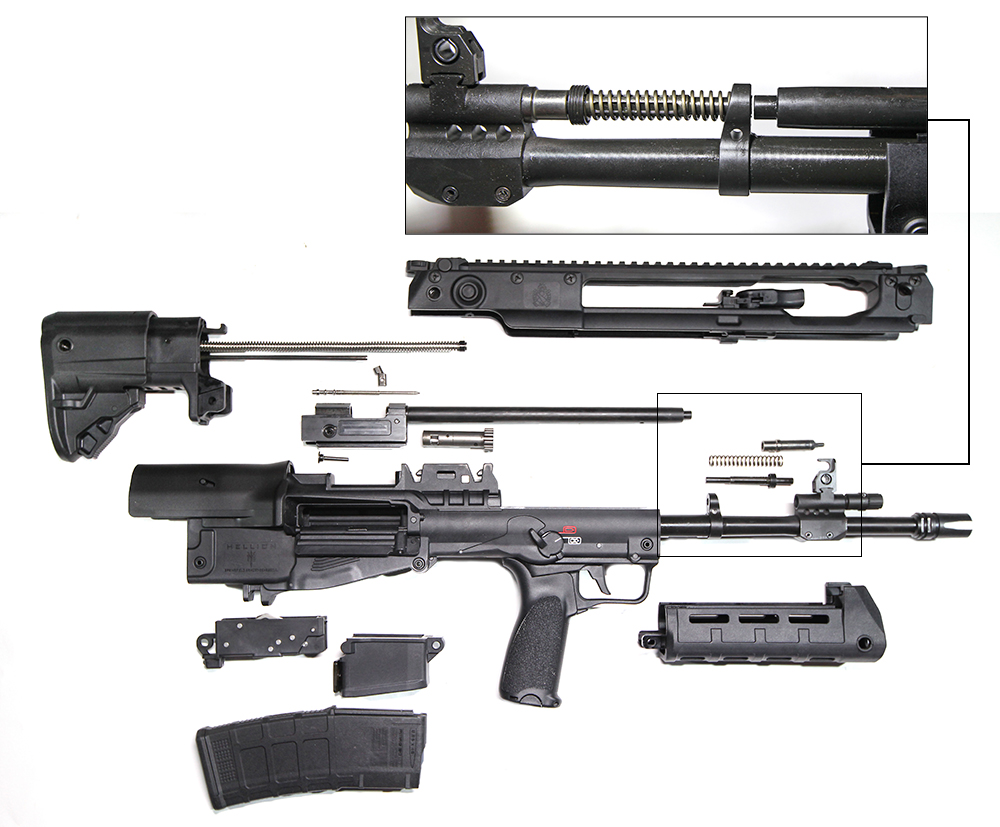 I.M. Metal would rebrand itself as HS Produkt in 2001. Soon after, Springfield Armory began importing the HS2000 pistol as its XD series, so it was a natural collaboration that brought the VHS design stateside. In January, Springfield announced that it would be offering a version of the VHS-2 in this country. While VHS stands for Višenamjenska Hrvatska Strojnica in Croat, which translates to “Multi-Purpose Croatian Machine Gun,” Springfield wisely stepped away from that acronym for the U.S. market—insert your Betamax joke here—and called the new rifle the Hellion.

Due to import restrictions, the Hellion cannot be brought in as a complete rifle. While Springfield is not specific about what parts of the Hellion are made in Croatia and what parts are manufactured here, it’s safe to say that major components, such as the barrel, bolt-carrier assembly and receiver are brought into this country, and then the required number of 922r components are added to make a complete rifle in Springfield’s newly expanded Geneseo, Ill., manufacturing facility. 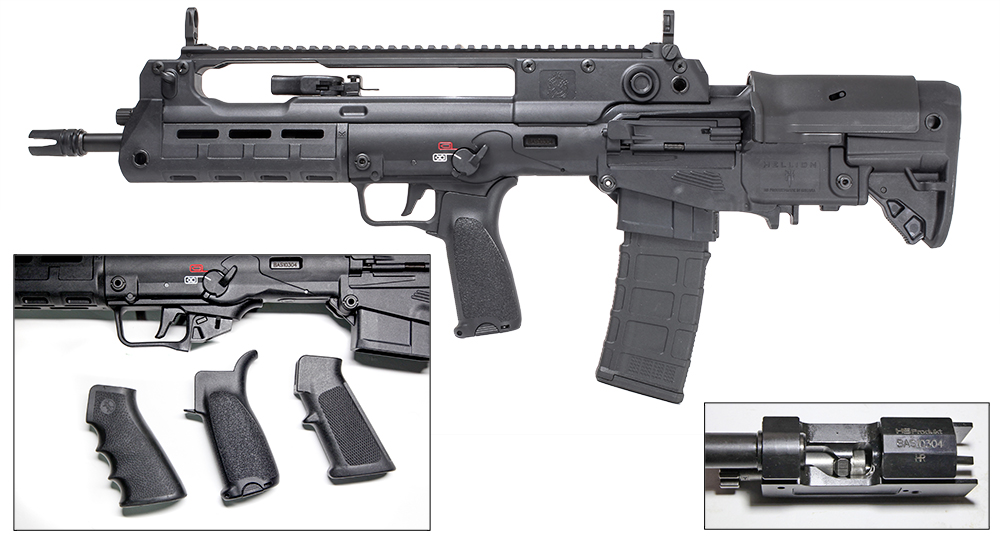 The Hellion’s factory-installed BCMGunfighter Mod 3 grip is replaceable with other AR-15-compatible styles (above). The rifle’s multi-lug bolt rides inside a square carrier and is rotated by way of a cam cut in the carrier that interacts with the pin in the bolt body (r.).

The Hellion follows the military VHS closely, with a few exceptions. Obviously, it fires in semi-automatic mode only. The Hellion also differs from the VHS in that it uses a user-replaceable AR-15-type grip (it is supplied with a BCMGunfighter Mod 3), an M-Lok-compatible handguard and fires from standard AR-15-type magazines.

The basic operating system of the Hellion is similar to the AR-18. A multi-lug bolt rides within a square carrier. A short-stroke gas piston impinges on the operating rod attached to the bolt carrier. When the carrier begins to move rearward, a camming slot in the carrier interacts with a cam pin in the bolt to rotate it and unlock its lugs from the barrel extension. The gas system is adjustable with two settings: “N” for normal firing conditions and “S” to limit overpressure when using a suppressor.

The Hellion uses a polymer receiver with molded-in guide rails for the bolt. The bolt also rides on a metal guide rod that is attached to the butt assembly. A metal trunnion, into which the barrel is mounted, is integrated into the receiver chassis.

The Hellion is one of the most quickly adaptable bullpups to date, with a charging handle that can be oriented to the left- (l.) or right-hand (r.) side of the gun. To accommodate left- or right-hand ejection, the bolt itself is simply rotated 120 degrees (ctr.).

While the military VHS is made in “long” (20″ barrel) and “short” (16″ barrel) versions, the Hellion is only offered with a 16.25″ barrel. The muzzle is threaded 1/2×28 TPI and supplied with a four-prong muzzle brake. The barrel is cold-hammer-forged and given a Melonite treatment.

The military VHS uses a G36-derived polymer magazine, but the design’s magazine well is removable and adaptable to STANAG/AR-15-type magazines. The Hellion is offered in this configuration and comes supplied with one Magpul PMAG. Throughout testing, I used a variety of metal and polymer AR-type magazines, and reliability was 100 percent with all.

The Hellion is capable of being operated in a fully ambidextrous manner; all controls are accessible by either hand. The G36-style charging handle is placed inside the carry handle and pivots to either side for right- or left-handed charging. It is non-reciprocating and not directly attached to the bolt, but a small latch behind the charging handle can be held down to lock the handle to the operating rod for “forward-assist” capabilities. The magazine release is a paddle-type button behind the magazine well. Empty magazines drop free when released. The bolt release is a sliding button behind the magazine release. The bolt locks open on an empty magazine, but there is no external way to lock the bolt open without a magazine. The simplest manual of arms for reloading the rifle is to, with a loaded magazine in the support hand, bring the hand up to the magazine well and hit the magazine release to drop the empty magazine. Insert the loaded magazine, and the support hand is in position to move back and hit the bolt release. The safety selector is mirrored on both sides of the rifle, positioned just above the grip, where it can be easily operated with the thumb of the shooting hand. 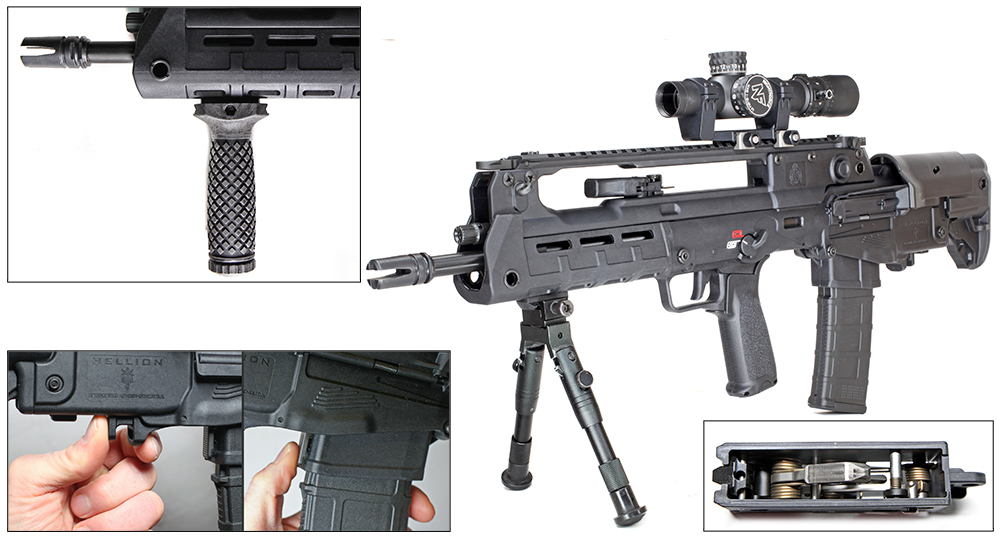 Well-thought-out operational and ergonomic features on the Hellion include (clockwise from top): the handguard, which can accept a number of accessories including a fore-end grip or bipod; a two-position gas port; a self-contained trigger pack; and centrally located bolt and magazine releases that allow for ambidextrous operation.

While HS Produkt markets its military VHS as being capable of firing from either shoulder, regardless of the direction of ejection, Springfield recommends that the Hellion be configured specifically for a right- or left-handed shooter. The process is simple, requires no special tools or spare parts and takes less than two minutes. The rifle is fieldstripped to remove the bolt-carrier assembly, which is disassembled, and the bolt is rotated 120 degrees and re-installed. The final step is to close the dustcover on the ejection port you’re not using and insert the block pin to secure it.

One feature that makes the Hellion stand out from the bullpup crowd is its adjustable stock. The rear portion of the rifle telescopes over five positions for a total length-of-pull range of 1.5″. The buttstock uses an M4-style release lever and can be adjusted with one hand. There are QD swivel sockets, as well as eye-hook sling attachment points, on the buttstock and handguard on both right and left sides, with another pair of QD sockets located at the rear of the carry handle. The Hellion’s handguard has a series of M-Lok slots for attaching accessories—three each at the three-, six- and nine-o’clock positions.

A pin retained by the cheekpiece holds closed the dustcover on the ejection port that is not in use (l.). Unusual for a bullpup is the Hellion’s spring-loaded buttstock, which is activated by a lever (far l., arrow), and results in five distinct length-of-pull settings.

The straight-line design of the Hellion requires a raised sighting platform, and its carry handle is topped with a 13″ metal M1913 Picatinny rail. A set of metal, flip-up iron sights are built into the carry-handle rail. The front sight is a post that is click-adjustable for elevation; the rear sight is an aperture click-adjustable for windage. The rear aperture can also be adjusted for range. Five different apertures can be rotated into position, from a close-range/night-sight “ghost ring” to 500 meters. The sight radius is 14.5″.

Despite its name, the Hellion exhibited perfect behavior on the range. While bullpups are known to be “trigger-pull-challenged,” the Hellion’s trigger was surprisingly user-friendly. It has two distinct stages. The first stage is 1/2″ of take-up; the second stage continues for another 1/4″ before breaking cleanly at 6 lbs., 8 ozs. To reset, the trigger returns to the beginning of the second stage and clicks positively. For accuracy testing, we used a Nightforce NX8 1-8X 24 mm F1 scope mounted with a Nightforce X-Treme Duty Ultralite Unimount. Accuracy with the three brands of ammunition we tried averaged five-shot groups of just under 2″ at 100 yards.

Off the bench, the advantages of a bullpup become obvious. While its length of pull seems long by conventional rifle standards, the combination of the Hellion’s bullpup rear-weight bias and its forward grip position balances its 8-lb. weight nicely. A thin and textured rubber recoil pad keeps the rifle firmly planted against the shoulder and allows for a secure one-hand hold, if necessary. The rifle’s short overall length makes it handy when negotiating obstacles and barriers and helps speed up transitions between targets. The Hellion’s handguard lacks a hand stop, despite the proximity of the support hand to the muzzle when firing; adding a stop or vertical grip is recommended. Using a “C-clamp” hold with the thumb secured behind the carry handle also does the trick. A raised “fence” around the ejection port and prominent case deflector throws empty brass well away from the shooter. While there were no malfunctions throughout our testing, the Hellion has a generously sized ejection port that would allow a shooter to diagnose and clear malfunctions easily. 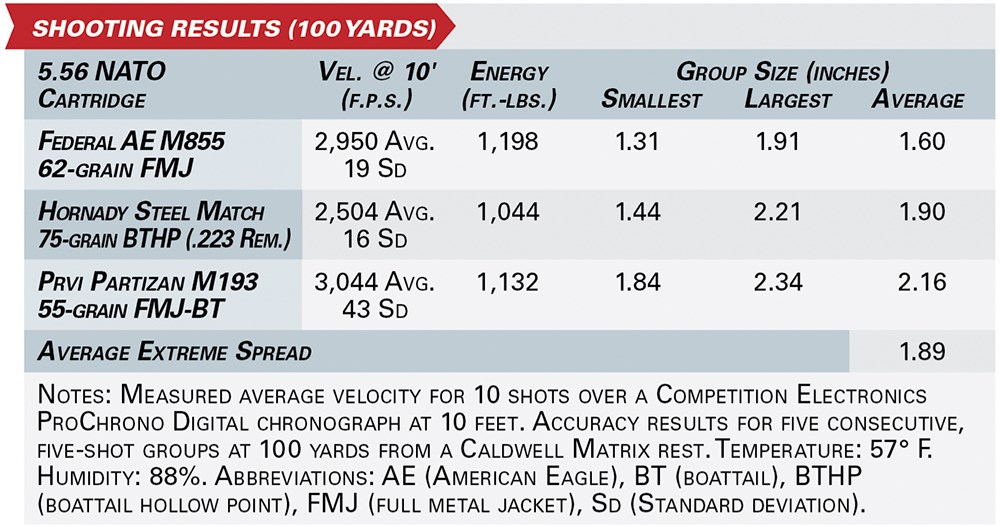 Disassembly is simple and does not require tools. The major components are held in place by push pins, which are captured so that they can’t be fully removed. The bolt and gas system can be easily disassembled for cleaning—even the fire-control group comes out as one self-contained unit for inspection and cleaning.

Although Springfield has stated that the black, 16.25″-barreled, 5.56 NATO Hellion is the only model the company has plans to offer in the U.S. at this time, the modular design is certainly adaptable to other cartridges, barrel lengths, magazines and sighting configurations.

There’s one final number to consider when it comes to bullpups. At $2,000, you pay a premium for something like the Hellion compared to a conventional modern sporting rifle. In exchange, you get full-size rifle ballistics out of an SBR-size package that is easy to use and maneuver in an interior or vehicular environment. To that, the Hellion adds accuracy, reliability and ergonomics, all based on a design that has a 15-year, real-world track record under its belt. 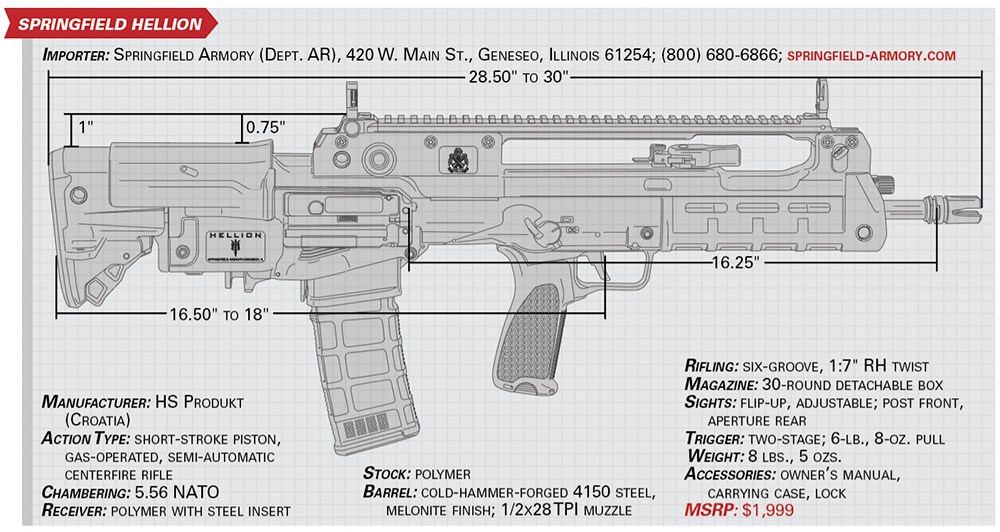