Twas the night before the night before Christmas and all through the house, not a creature was stirring until three men attempted to intrude in the home of two men in the Houston, Texas area and one of them had a shotgun.  Needless to say, the three intruders enjoyed Christmas in the morgue.

On Monday, three men attempted to break into a trailer in which two men were living.

According to police, three Hispanic males dressed in dark clothing and armed with a pistol attempted the break in around 8am.

“He saw several males dressed in dark clothing,” Harris County Sheriff Ed Gonzalez said of the homeowner, whom he did not identify.

@HCSOTexas units are at the 1800 blk of 1835 Amie Michele Ln. Very preliminary info: four males attempted to burglarize a residence. Three were possibly shot and three of the four are believed to be deceased at the scene. I’m enroute to the scene now. #HouNews pic.twitter.com/6EFdaQss7m

While one of the residents hid in a room, the other grabbed a shotgun, hitting all three intruders, according to Gonzalez.

“It appears there was some type of gunfire exchange. The one with shotgun was able to shoot at the three males and they were all pronounced deceased here at the scene,” Gonzalez said.

It appears the men were attempting a robbery when they were gunned down.

“We’re going to have a lengthy follow-up investigation out here at the scene,” Gonzalez said. “Having three dead bodies inside a home is not very common.”

One man spoke, who claims to be a cousin of the man who shot the intruders, said his cousin did not know the men, according to KPRC.

“The other three guys are not from here, never seen them in my life. Nobody has, so we’re guessing it’s somebody from somebody else that just tried to break into a home and tried to do a home invasion,” said Cesar Lopez, who identified himself as a cousin of the homeowner.

Lopez said his cousin, whom he identified as Yair Gallegos, was shot at least twice —once in the back and once in the leg. The homeowner was taken to the hospital Monday morning in serious condition and he spent Monday in surgery.

“The one good thing, I guess I can say, is that he did have a weapon in order to defend himself,” Lopez said. He said his cousin had recently moved into the trailer home, although the family has lived in the neighborhood for years.

Sheriff Gonzalez said other suspects may have also been involved in the crime before fleeing.

Several witnesses say they saw a fourth man approach the home on Monday too, but investigators believe he fled the scene.

While the case will be presented to a grand jury, but Gonzalez told KHOU the shooting initially appears to be justified.

Texas castle doctrine protects people from prosecution in order that they may defend themselves from intruders in their homes. 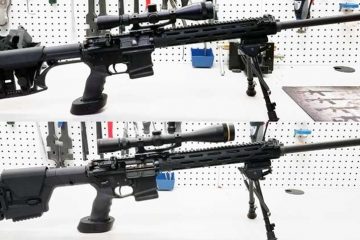