The Gun Dealer Giving Away That $15,000 Barrett 50 BMG Just Upped The Ante With Days To Go To Enter!

All I want for Christmas is a Barrett 50 BMG Military Deployment Rifle Package from Classic Firearms!  That’s my Christmas wish!   On December 6, 2018, I wrote about a conservative, Christian gun store that is giving away an incredible military package from Barrett.  Classic Firearms is giving away this Christmas season, a Barrett M107A1 50 BMG Military Deployment Rifle Package valued at $15,000!  However, last night, I got an email from Classic Firearms informing me that they have upped the ante in the giveaway and you’ll definitely want to get your entry in soon.

Here’s the email I received.

MONROE — Breaking: The Classic Firearms BIGGEST BADDEST Barrett contest just got even BIGGER. YouTuber Iraqveteran8888 has invited the winner of the contest to come and live fire the Barrett on his farm. Take a look at their Facebook post:

“Classic Firearms have lost their dang minds. They are giving away a Barrett M107A1 Deployment Package. We think that’s so damn cool that we are going to have the winner come to the farm and film a video with us. Because what’s better than one Barrett? Two Barretts!!! Rick and the guys are cool for doing this. They are even going to cover your plane ticket! 😬😬😬🇺🇸🇺🇸🇺🇸”

Interesting that this comes from Iraqveteran8888, whose video I featured in the original article and have appreciated several of his videos, including the one on the Olight PL-mini, which I made my decision to purchase.

Ben from Classic Firearms was very excited over the announcement and wrote.

This contest has peaked to a whole new level. One lucky winner will take home the $15,000 Barrett rifle with the military deployment package. Then they will be able to take that rifle and fire it with one of the most famous YouTube gun enthusiasts out there. This is easily now the biggest gun giveaway in the history of mankind. This one will be written about in the history books for sure.

Classic Firearms will be covering the airfare for the winner.

No time to waste! Enter below! Already entered? Be sure to get all your possible entries including referring friends.

As if a $15,000 Barrett 50 BMG military rifle package that is only 1 of 53 in existence wasn’t enough, they are going to fly you down to shoot the Barrett alongside Iraqveteran8888 and film a YouTube video!

If you haven’t entered, now’s your chance. Be sure to enter for your chance to win and check out their page here. 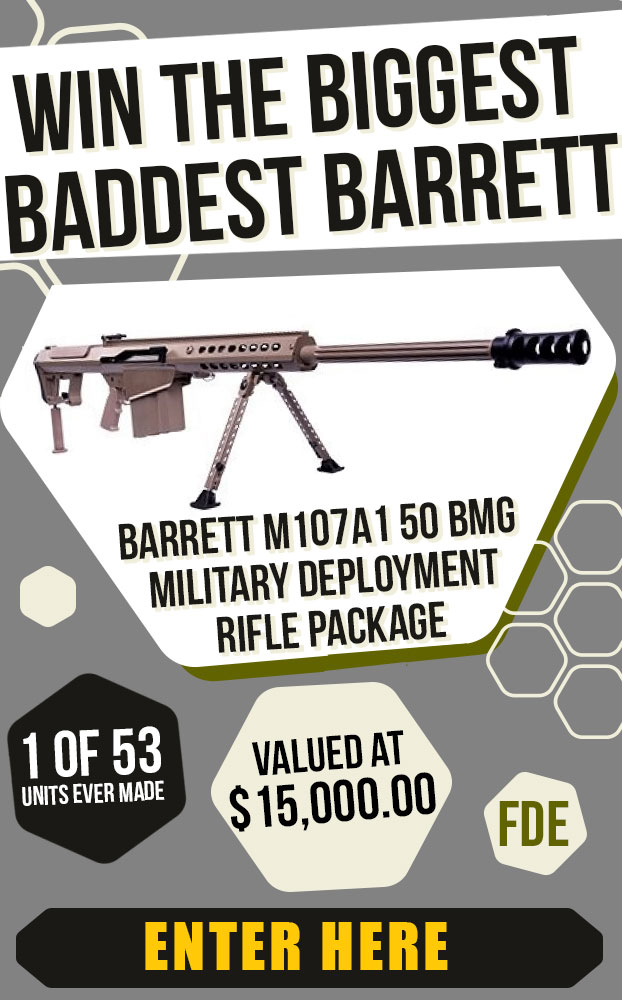 David Hogg, Three-Quarters Of A Billion Dollars in Taxes Was Collected Last Year On Guns & Ammo

The Gun Dealer Giving Away That $15,000 Barrett 50 BMG Just Upped The Ante With Days To Go To Enter!