The invasion of Grenada had just begun, and the U.S. assault troops were in trouble. American transport aircraft dropped a company of U.S. 75th Rangers onto the runway at Port Salines Airport, and the American troops were quickly engaged by 23 mm anti-aircraft guns. With the men scattered along the length of the runway and struggling to shed their parachutes, two Soviet-made BTR-60 armored personnel carriers appeared at the end of the runway and began to close on the Americans. The BTRs’ heavy machine guns began to chatter, and soon, 14.5 mm rounds were splattering off the tarmac among the American troops. 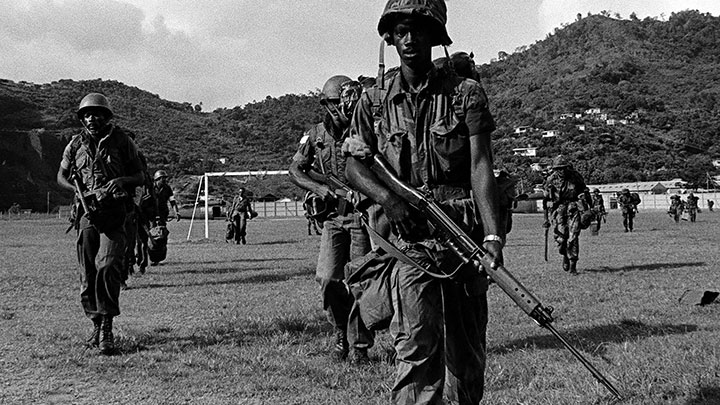 Urgent Fury was a multi-national operation. Men of the Eastern Caribbean Defense Force help secure the island. The soldier in the foreground carries the FN FAL rifle (7.62 NATO) while the man to left holds a Sterling submachine gun (9 mm). 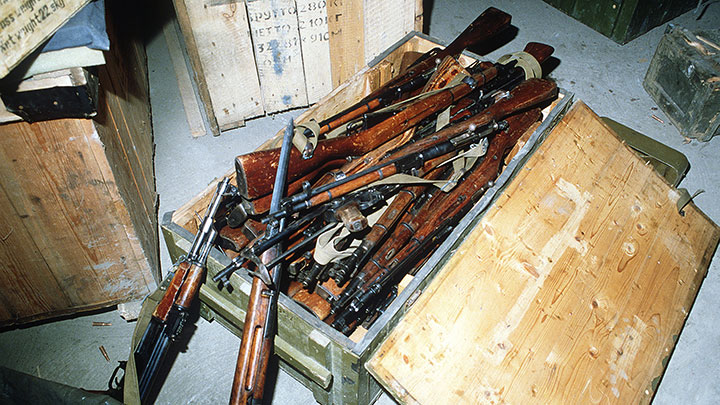 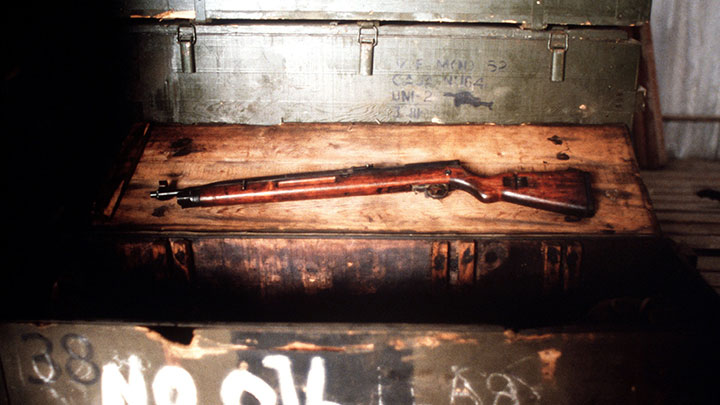 The vz.52/57 was a surprise find for U.S. troops on Grenada. These rifles had been phased out of Czech service in 1957, and many found their way to Cuba, who then passed them on to nations like Angola and Grenada. The vz.52/57 has an integral blade bayonet in a recess cut into the right side of the stock.

Maj. David T. Rivard noted the difficult initial moments of the Grenada operation in his report “An Analysis of Operation Urgent Fury” to the Air Command and Staff College:

“The anti-aircraft guns had been positioned on hills near the airport and could not depress their guns low enough to effectively fire on the C-130s. As the 700 Rangers drifted toward the airstrip in their chutes, the Cubans met them with AK-47 fire. Armored personnel carriers appeared within 400 yds. of the landing zone and started to engage the Rangers. The troops took cover, and the AC-130 gunship overhead provided effective covering fire. The enemy forces had been waiting for the attack.” 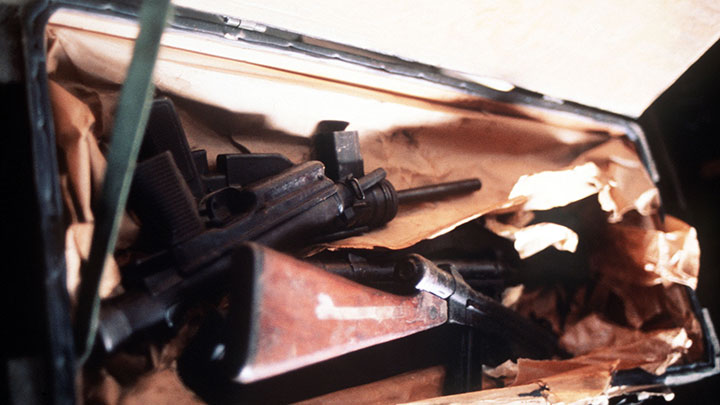 Czech Samopal Sa 25 (vz. 48b) submachine guns (9 mm) captured in Grenada. The wooden-stocked Sa 23 is seen at the right. 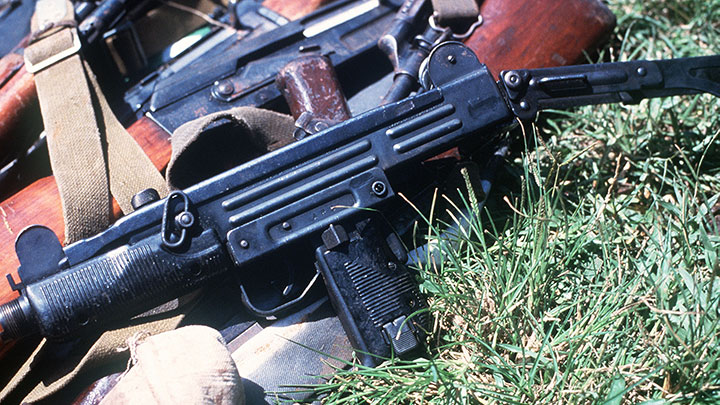 An UZI captured among the communist AK-47s. 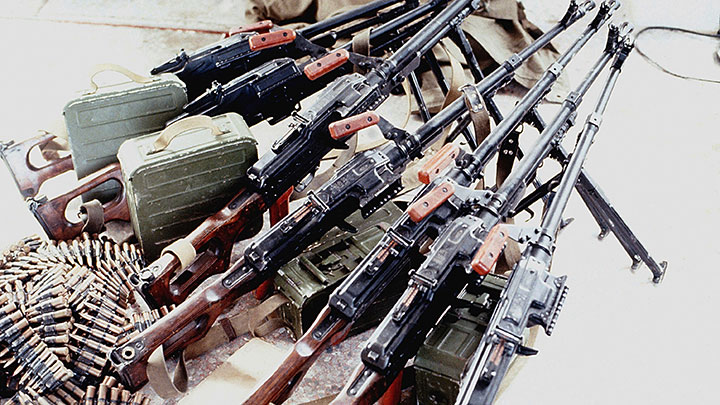 As the BTR-60s quickly closed the range, it appeared that the Rangers’ drop zone would be overrun.  When the vehicles reached the mid-point of the runway, both BTRs were suddenly struck with hollow-charge antitank rounds. The fast-acting Rangers had set up 90 mm recoilless rifles and immediately scored hits. This was just in time, as the sky above was filled with the descending parachutes of the next wave of Rangers. The second group of Rangers quickly assaulted the 23 mm AA guns positions atop a nearby hill.  Within 10 minutes, the AA guns were silent, too.

At War in America’s Backyard

The invasion of Grenada began on the morning of Oct. 25, 1983.  Operation “Urgent Fury” quickly became fast and furious, as America’s Rapid Deployment Force, including elements of the 82nd Airborne Division, Marine Corps, U.S. Army Delta Force, and Navy SEALs, moved to secure the island from Grenadian and Cuban communist forces. 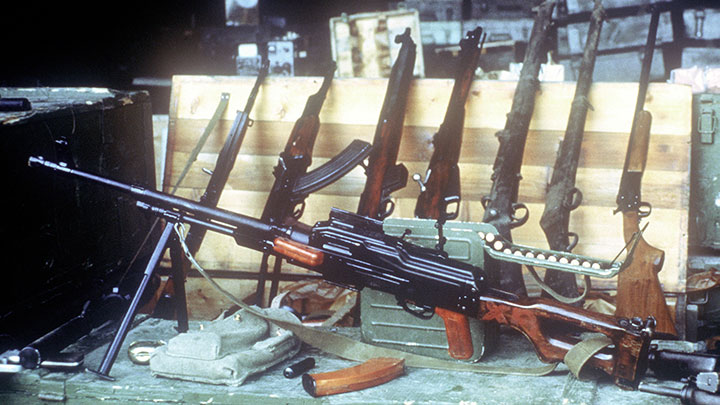 A PKM machine gun posed alongside a broad range of long arms captured on Grenada, including an SMLE Mk III, a Martini-Henry rifle, a commercial shotgun and a Czech vz. 52/57. 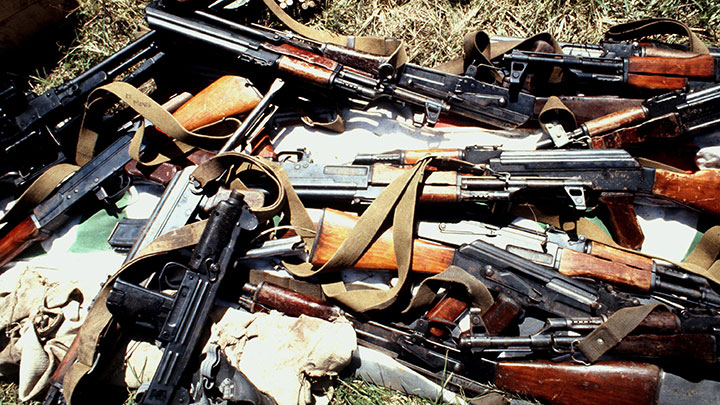 Many more eastern-bloc small arms were captured on Grenada than there were men to use them—leading U.S. intel experts to believe that the Cubans and Soviets were planning a strong push to extend their influence into Latin America. 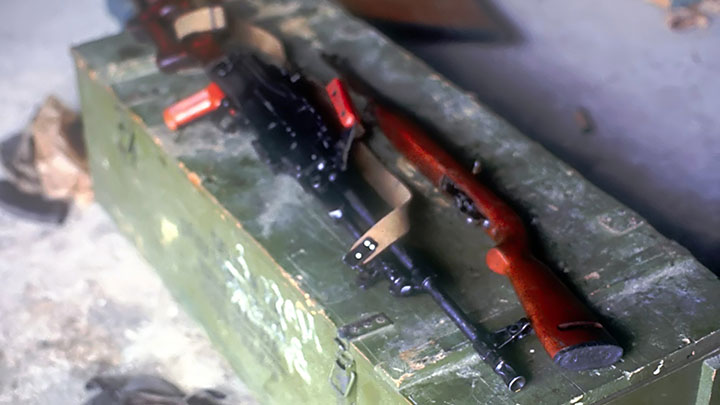 A PKM machine gun captured, along with a M1 carbine.

President Reagan directed U.S. forces to Grenada specifically to guarantee the safety of 600 American medical students on the island. The action in Grenada came just two days after the deadly terrorist attack on the USMC barracks in Beirut, Lebanon, where a suicide truck bomb killed 220 U.S. Marines. The Cold War turned hot in the sunny Caribbean, only 1,500 miles southwest of Miami, Fla.

Communist forces on Grenada were well-equipped with anti-aircraft guns, particularly the Czech-made M53 quadruple 12.7 mm gun. These guns were particularly dangerous to the helicopters that supported the landing force. While Operation Urgent Fury may not rival the Marine landings of previous wars, there was no shortage of leatherneck heroism on Grenada.  The USMC profile “U.S. Marines in Grenada 1983” describes the dangers presented by enemy AA on the island and traditional Marine courage in response:

“Marine Capt. Jeb F. Seagle dragged Captain Timothy D. Howard away from their burning AH-1 Cobra, shot down by Grenadian 12.7 mm antiaircraft fire near Fort Frederick. Capt. Seagle was killed while looking for help for Howard, who had been severely wounded. Howard was ultimately rescued by a CH-46, piloted by Maj. DeMars and 1st Lt. Lawrence M. King, Jr. 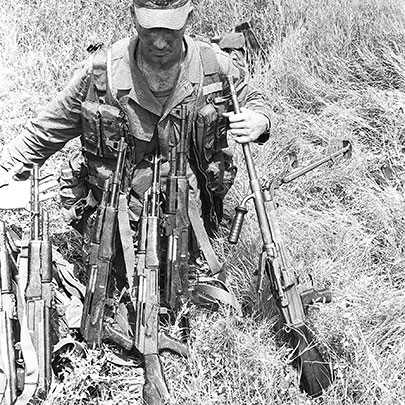 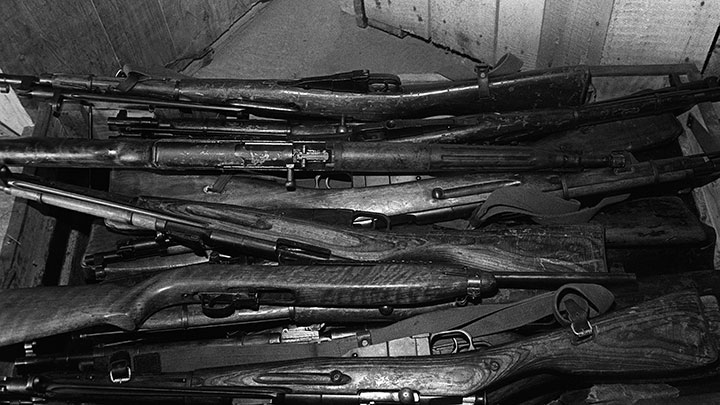 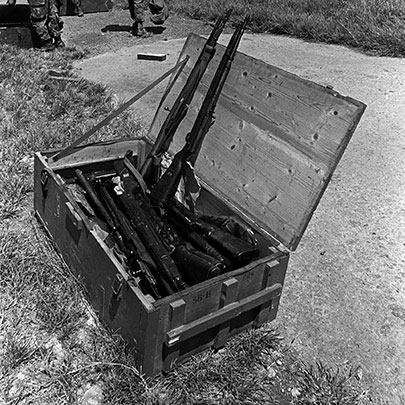 While another Marine Cobra attacked the antiaircraft site with 20 mm cannon and rockets, Maj. DeMars landed his CH-46 in the field near Howard. The landing chopper attracted small-arms fire to the field. A few rounds hit the CH-46, slightly damaging the stabilizing equipment. The squadron maintenance chief, Gunnery Sgt. Kelly M. Neidigh (a Vietnam veteran) riding along as a gunner, quickly disconnected himself from his intercom equipment and jumped from the aircraft.

Armed with an M-16 rifle, he sprinted the 40-yd. distance to Capt. Howard. Ignoring the fire directed at him, Neidigh half-dragged, half-carried Howard back to the aircraft and hoisted him on board with the aid of the crew chief. Cpl. Simon D. Gore, Jr. Still under fire, DeMars continued to wait in hopes of finding Capt. Seagle, not knowing that hostile fire had already killed him. 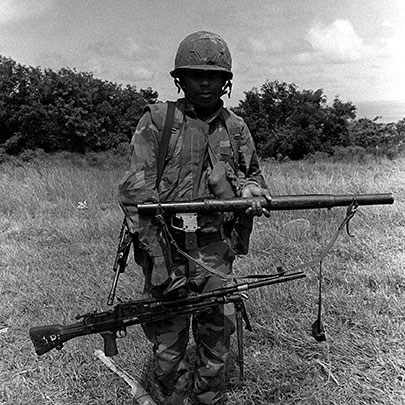 A soldier of the Eastern Caribbean Defense Force poses with a captured RPG-2 rocket launcher and a Bren L4 light machine gun (7.62 NATO). 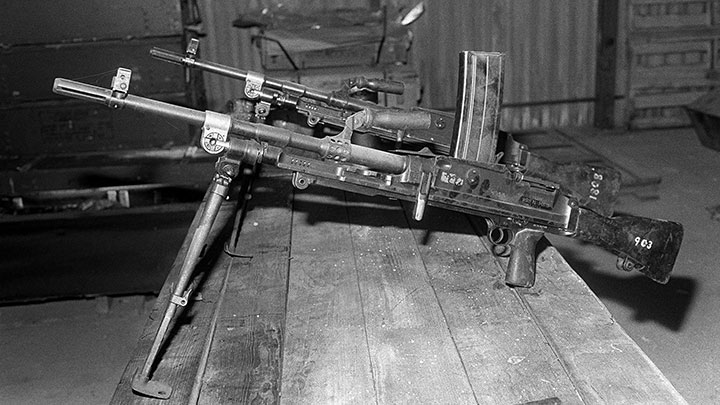 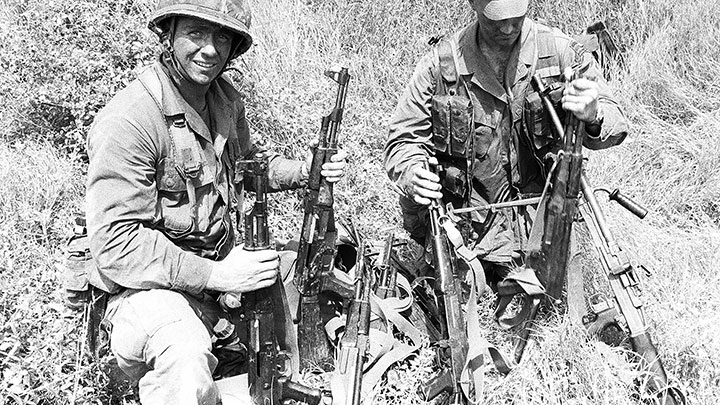 Finally, with no sign of the second Cobra pilot, and with Howard’s condition rapidly worsening, DeMars decided to take off. The second Marine Cobra was hit by AA fire and crashed into the harbor with the loss of the pilot and copilot. The CH-46 flew Captain Howard to the USS Guam, where he received medical treatment that saved his life but could not save his right forearm.”

An Island Base for Communist Expansion

The island of Grenada was filled with arms caches, with the communists storing far more firearms than there were Cubans or Grenadians available to use them.  The Marine history of Urgent Fury describes the efforts made to secure the stockpiles:

“Local citizens immediately began to point out members of the militia and the People’s Revolutionary Army to the Marines, leading them to houses and other sites of concealed arms caches. Grenadians even loaned their vehicles to the Marines for use in gathering the considerable quantities of arms and ammunition that were being uncovered. Patrols, accompanied by local guides, moved into the countryside to search out caches; Marines established roadblocks to stop and identify members of the Grenadian army and militia who were trying to escape detection by changing into civilian clothing.” 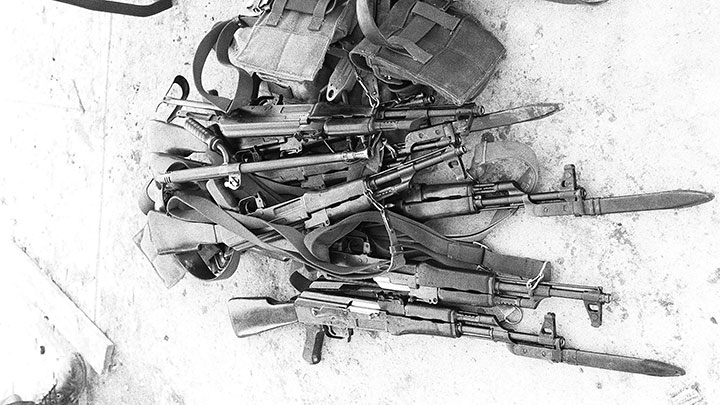 Multiple styles of AK-47 rifles captured on Grenada. An extra barrel for a Czech vz. 52/57 LMG is seen on top of the pile. 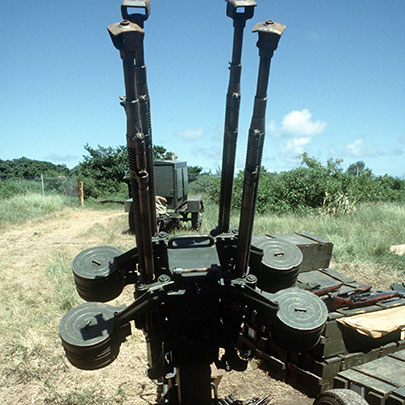 AA defense: several examples of the Czech-made M53 (12.7 mm) AA gun were captured on Grenada. This gun was used in the defense of Point Salines airport. 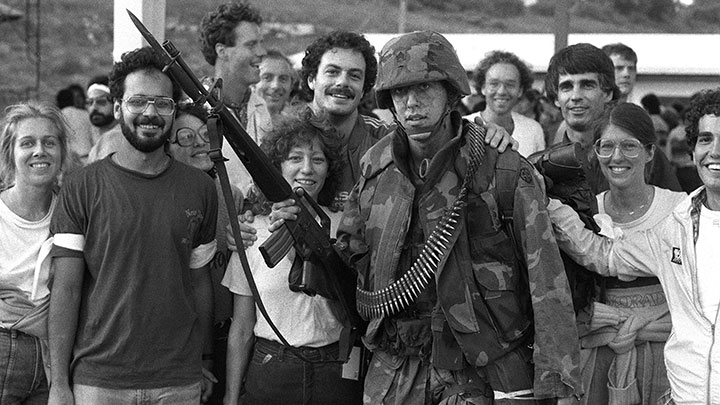 Liberated: American students at St. Georges University on Grenada pose with a trooper of the 82nd Airborne Division. He carries an M16A1 rifle equipped with an M7 bayonet.

Later, as the Marines took the Grenadian fort at St. Georges:

“Large quantities of weapons, including light machine guns, AK-47 assault rifles, heavy machine guns and great stacks of ammunition were left behind in Fort Frederick. Nearby, Marines discovered a truck with three new 82 mm mortars and two trucks heavily loaded with anti-aircraft ammunition. In underground tunnels below the fort, which had housed a headquarters of some type, Dobson’s men found quantities of significant documents, including an arms agreement recently signed by Nicaragua, Cuba, Grenada and the Soviet Union.” 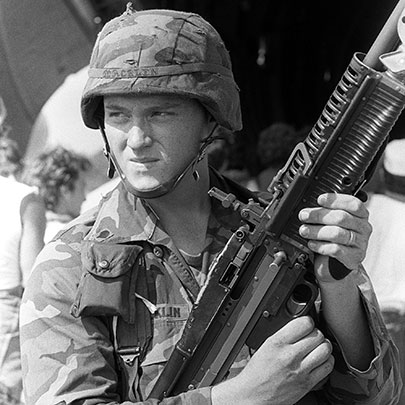 Covering the evacuation of American students, a US soldier cradles a M60 general-purpose machine gun. 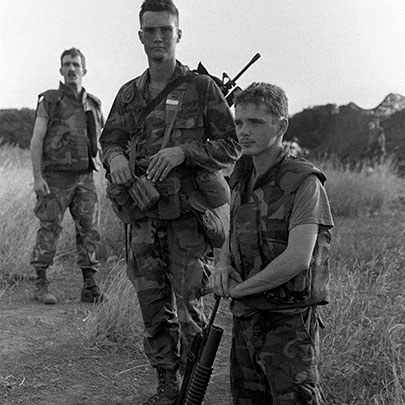 The barefoot grenadier: an M16/M203-armed soldier enjoys the weather on Grenada. 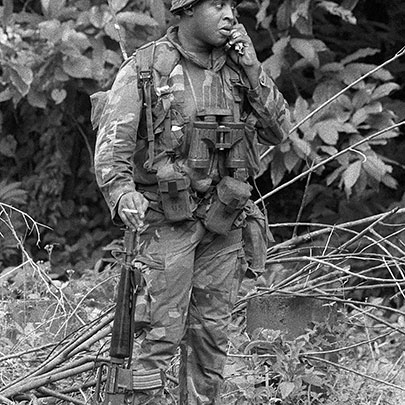 A Marine radio operator on Grenada armed with a M16A1.

Clearly, communist forces in the Caribbean were preparing to expand their influence out from Grenada, turn the 135 square-mile island nation into a fortress or both. The “Island of Spice” was filled up with a lot more than nutmeg. Major Rivard’s report details the firearms discovered by U.S. forces:

“There were about 10,000 rifles, including assault rifles, sniper rifles and carbines; more than 4,500 machine guns, 294 portable rocket launchers with 16,000 rockets. In addition to this, there were 60 anti-aircraft guns of various sizes including almost 600,000 rounds of ammunition and 30 57 mm ZIS-2 anti-tank guns with about 10,000 rounds of ammunition. Finally, 60 armored personnel carriers, 30 76 mm ZIS-2 field guns and 20,000 uniforms were also found. Large amounts of this equipment were captured still in shipping crates stored in warehouses.”

The fighting on Grenada was a microcosm of the Cold War and a technological snapshot of a conventional engagement between western and communist forces. Most of the small arms used during Urgent Fury are well-known players, the U.S. M16A2 and the M60 machine gun versus the Soviet AK-47 and PKM GPMG. The island’s location gave some of the Grenadian small arms a certain uniqueness. 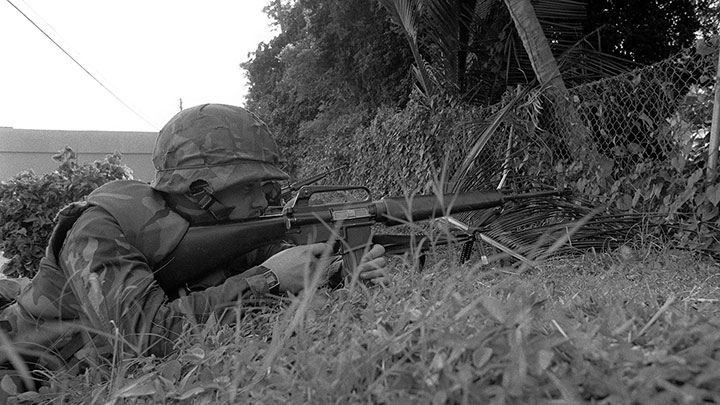 Every Marine a rifleman: a USMC M16A1 in action on Grenada. 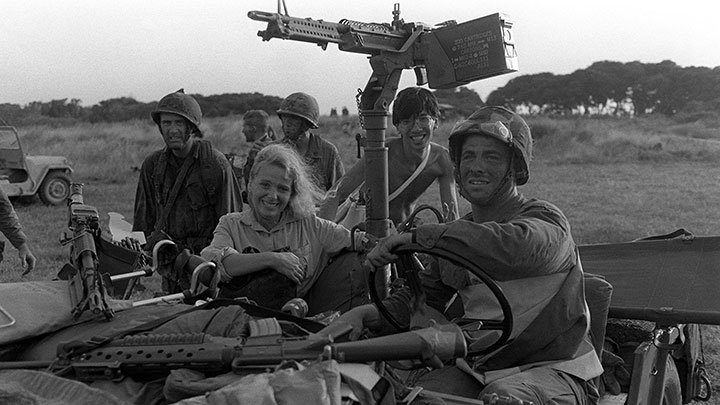 A ride home: a trooper of the 82nd Airborne behind the wheel of an M151 1/4-ton utility vehicle (the “Mutt”), featuring an M60 on the pedestal mount. 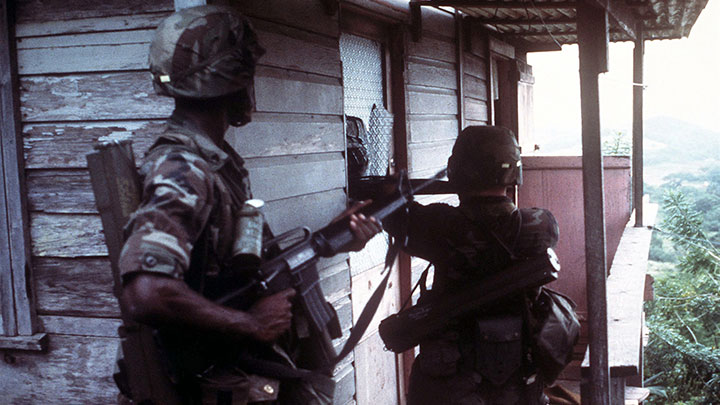 The paratroopers come a-knocking. Men of the 82nd Airborne clear houses on their sweep through Grenada. Both carry M16A1 rifles and M72 LAW (66 mm) anti-tank weapons.

M1 carbines were a part of the mix. Soviet M44 bolt-action carbines were also there. So were a few British Bren guns chambered in 7.62×51 mm NATO. The Cubans sent a few older Czech-made firearms to Grenada, including the vz. 52/57 semi-automatic rifle and the rare vz. 52/57 light machine gun (both in 7.62x39mm).

Kind of a Big Deal

I have a couple of friends who were part of Operation Urgent Fury, and for years, they have described the invasion to me as “not a big deal.” For years, I have let them get away with under-selling it. Looking back and realizing the large (and growing) firearms stockpile on Grenada at that time, the operation was rather important. America simply could not let more communist dominoes fall in the Caribbean or in South America. Urgent Fury helped keep the Cold War from reaching a boiling point while also keeping communism contained. Just six years later, the Berlin Wall would come down, and the Soviet Union fell with it. Of the opposing players, only Cuba remains today. 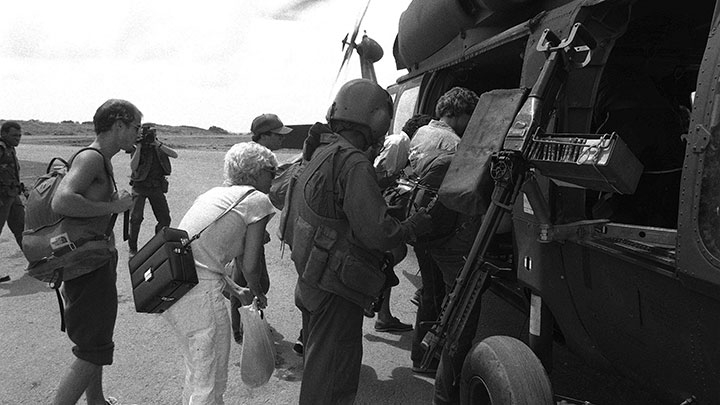 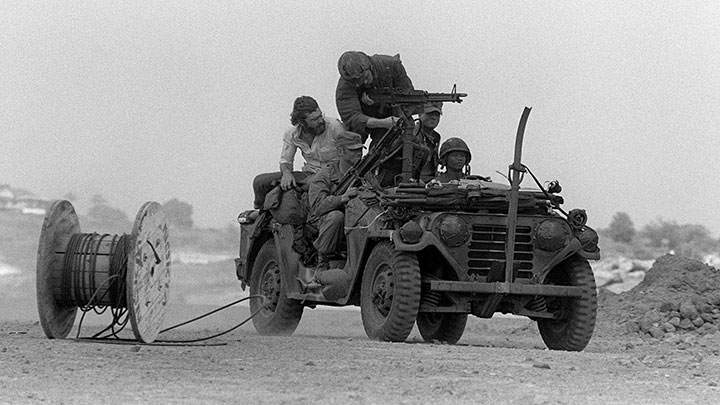 M151 “Mutt” sporting a pair of M60 machine guns, as well as a wire-cutting bar attached to the front grill. 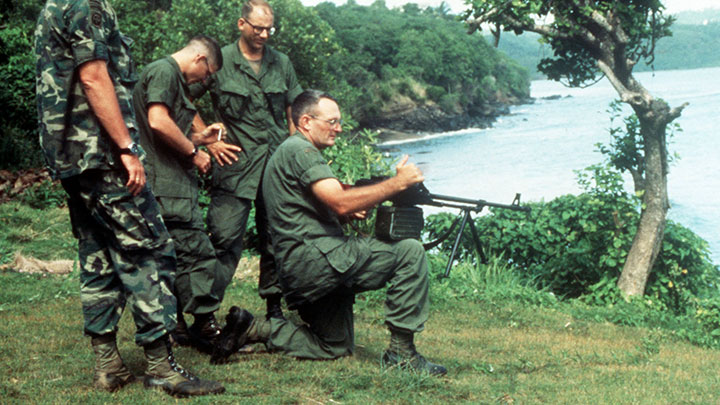 Officers and men of the 82nd Airborne test out a captured PKM machine gun (with a 100-round ammunition belt container).

Ultimately, 19 American troops were killed in Operation Urgent Fury, and nearly 120 were wounded. Communist forces lost 45 dead and nearly 350 wounded.  This was the price to halt Soviet and Cuban communist expansion in the Caribbean. The American students on the island were returned safely to the U.S. Democracy was restored in Grenada, a free nation where they now call Oct. 25 “Thanksgiving Day”.