Having been around shooting for some time now, I’ve found it harder and harder to get excited about a new cartridge or platform.  So when I first encountered the Maxim Defense PDX in the pages of a gun magazine I was surprised that I WAS excited. A hard-hitting, tiny carbine shooting 7.62×39 mm?

The 7.62×39 mm platform suffers from the inconsistent manufacture of both rifle and ammunition. What if modern American engineering was applied to this cartridge? Would this be a way to improve the performance of this round? Today, I would say yes – especially with the build quality the PDX displays. At 19 inches long with the nifty stock collapsed and measuring only 23.5 inches when extended and weighing 7 pounds (unloaded, with BUIS, red-dot and sling), the PDX allows you to take a rifle to a pistol fight. It’s eminently concealable, and quick to deploy.

Having purchased the PDX as a Short Barreled Rifle, I submitted the paperwork to BATFE and sat back to wait. While I awaited my tax stamp I had “visitation rights” to the PDX, and was able to fire the gun before formally taking possession. Right away I noticed a problem: For some reason the gas system wasn’t properly cycling the weapon, failing to feed a subsequent round. So, back it went to Maxim Defense, who fixed it and turned it around very quickly. I had not intended to evaluate Maxim Defense’s customer support, but it’s both effective and timely. Nice folks, too.

In early 2021 I finally received my tax stamp and promptly signed up for Gunsite Academy’s 556 class. This class would give me the opportunity to work the platform and cartridge HARD, so as to reveal any defects. I was able to practice a good deal with the PDX prior to my class. This allowed me to sight the gun in and shoot it at distances out to 300 yards. I discovered that with the 5-inch barrel, one had to hold over the target to hit at 300 yards. Even with the 8-inch barrel, hitting at 300 yards was still problematic. Here we run into the limitations of the cartridge.

I also purchased a CGS group suppressor, the only suppressor Maxim Defense suggests for the PDX. It’s supposed to be OK with full-auto fire and any length barrel, so I installed it on the 5-inch upper. In my class I would use the 5-inch suppressed upper for 50 yards and in and the unsuppressed 8-inch upper for longer ranges. 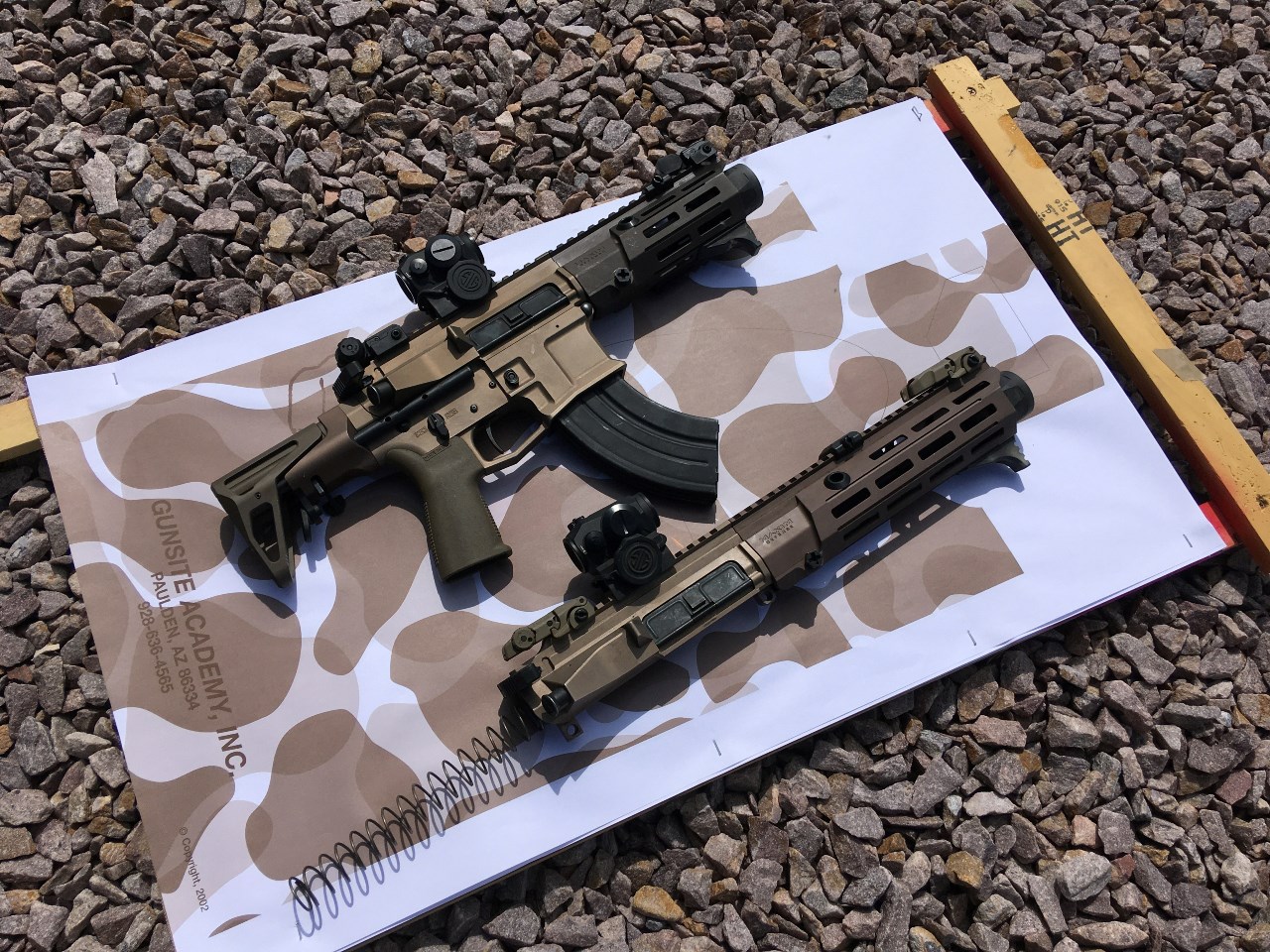 The PDX is configured just like an AR so anyone familiar with this system will be right at home. The ingenious collapsible stock deploys rapidly one-handed, and it’s quick to put on target. Recoil is a bit sharper than 5.56 NATO, but very manageable.

I decided to take the class with two different loads: Russian Wolf steel case and the more refined Sellier & Bellot 124 grain load. The S&B rounds are Boxer primed, so they’re worth retaining, and delivered a bit more accuracy and consistency in velocity, so I used that round for longer distances, and the Wolf ammo for closer in. I also needed to acquire some frangible ammunition for the indoor and outdoor simulators.  7.62×39 mm frangible was tough to find but I was able to get a small supply.

Maxim Defense suggests that you use Duramag magazines in their weapons.  In the case of 7.62×39 mm there aren’t a lot of choices, so I bought Duramags in both 20- and 28-round models.  They performed flawlessly during my five-day class.

The magazine article stated that I would receive a Geissele SSA-E trigger as standard equipment. Instead I got some sort of stock trigger that broke between 7 to 9 pounds, which only a lawyer could love. A Timney trigger dropped right in, arriving at a crisp, 2-pound pull. Next, the collapsible stock sacrifices some comfort in favor of compactness. When the stock is fully extended there is a gap between the end of the buffer tube and the comb of the stock.  If you don’t get a good, solid cheek-weld when pointing the weapon in, you are going to get punched in the face.

While the 5-inch upper functioned flawlessly, I had some unusual, and repeatable problems with the 8-inch upper: A round would fail to eject but the gun would also partially feed the next round. This happened more so with the S&B round.  I did not have enough time to have Maxim Defense look at this problem before class.

As to accuracy, well, one can only expect so much from the 7.62×39 mm round, and it’s not going to make one-hole groups at any distance. I was completely happy with a 2-inch group at 100 yards. With both barrels sighted in and some pre-practice under my belt, I’d done all I could to prepare myself, so off to class I went. 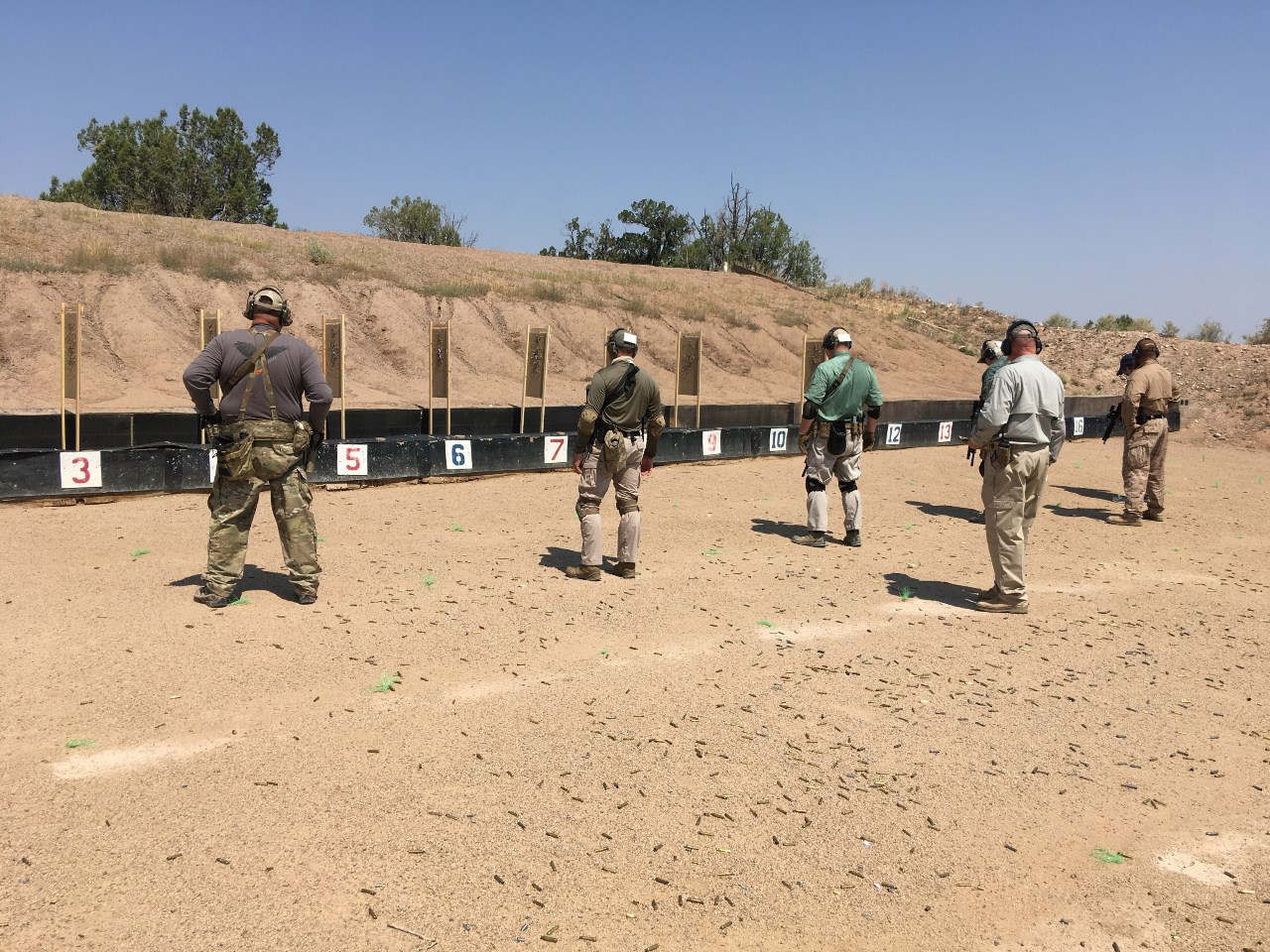 Gunsite’s 556 class takes up where the more basic 223 class leaves off. In 223 one is introduced to the platform; 556, however, is a “carbine finishing school”. This class demands greater accuracy in shorter time periods, and requires shooting on the move and on moving targets.  There’s an emphasis on closer ranges and transition to the pistol as well as unusual shooting positions. When off the square range, skills are forged and assessed in indoor and outdoor simulators. Simulators test both the student’s reasoning abilities AND the ability to make quick, accurate shots. Gunsite is not a target range; it’s a fighting school.

556 is a fairly physical class. Elbow and knee pads are recommended. A lot of the class is dynamic (including a dead run on the Scrambler range), so it’s best to condition one’s self for this class. That said, it’s not boot-camp and the instructors aren’t there to break you. So, if you can’t get into kneeling position – don’t kneel.

The first afternoon we found ourselves on Military Crest. This range tests accuracy using non-standard firing positions. Over the 20 positions of this course various steel targets are revealed at unknown distances, and one often has multiple engagements from each position. Other targets are concealed from view, so part of the course tests one’s ability to spot targets. With a subset of the class walking the course together it’s like golf for shooters. Most positions at Military Crest provide some sort of brace – if you can figure it out. Often, one “weaves” himself into a tree to find a stable position. Then it’s a matter of applying the basics, consistently. Military Crest is one of my favorite simulators at Gunsite.

Most “school solutions” involve either a controlled pair of shots (multiple sight pictures) or “hammers” (two rounds with one sight picture). Each has its place and shooting pairs is a great way to practice sight picture, trigger press and reset of both sights and triggers. Non-standard responses involve more than two shots and perhaps no more than five. During these drills I had several failures to fire. This was probably due to the hard primers found in Wolf ammunition. This allowed me to refine my malfunction clearances.

Day two covered turns and pivots. These drills demand specific and efficient foot-work. The goal is to SEE the threat before turning and deciding whether to fire or not.  Then it was shooting on the move, both down-range and up-range. Our Range-Master said, “For the rest of the week, each drill will begin with you moving either right or left. If you collide with another student during the drill, deal with it.”

While malfunction clearances are a necessary tool in the tool-kit, the fastest malfunction clearance is a transition to a secondary weapon. So, on the afternoon of day two we practiced transitions to the handgun.  These exercises were practiced with unloaded weapons at first.  When the instructors thought we were ready we were told, “From this point forward if you’re moving, clear the malfunction on the move.  If you must transition to the pistol instead do so.” The goal is to build one’s skills into a seamless body of knowledge so that problems with the gear are handled almost automatically while the mind is free to work on fighting and winning.

At Gunsite a night-shoot is part of the package.  It’s rare to get the opportunity to practice one’s skills in low-light, so I always look forward to this portion of the class. Everything is twice as hard at night. Situational awareness, threat identification, accurate shooting, methodical movement and working with a flashlight is quite demanding. On the PDX I had added a tiny bit of rail for a Surefire X300. Since the switch wasn’t where I was used to, there was a bit of hilarity with my light technique. I’d scan, see the target and fumble the light OFF, which meant I had to reacquire the target. Matt Ostrander was very patient with me as I worked through the problems. 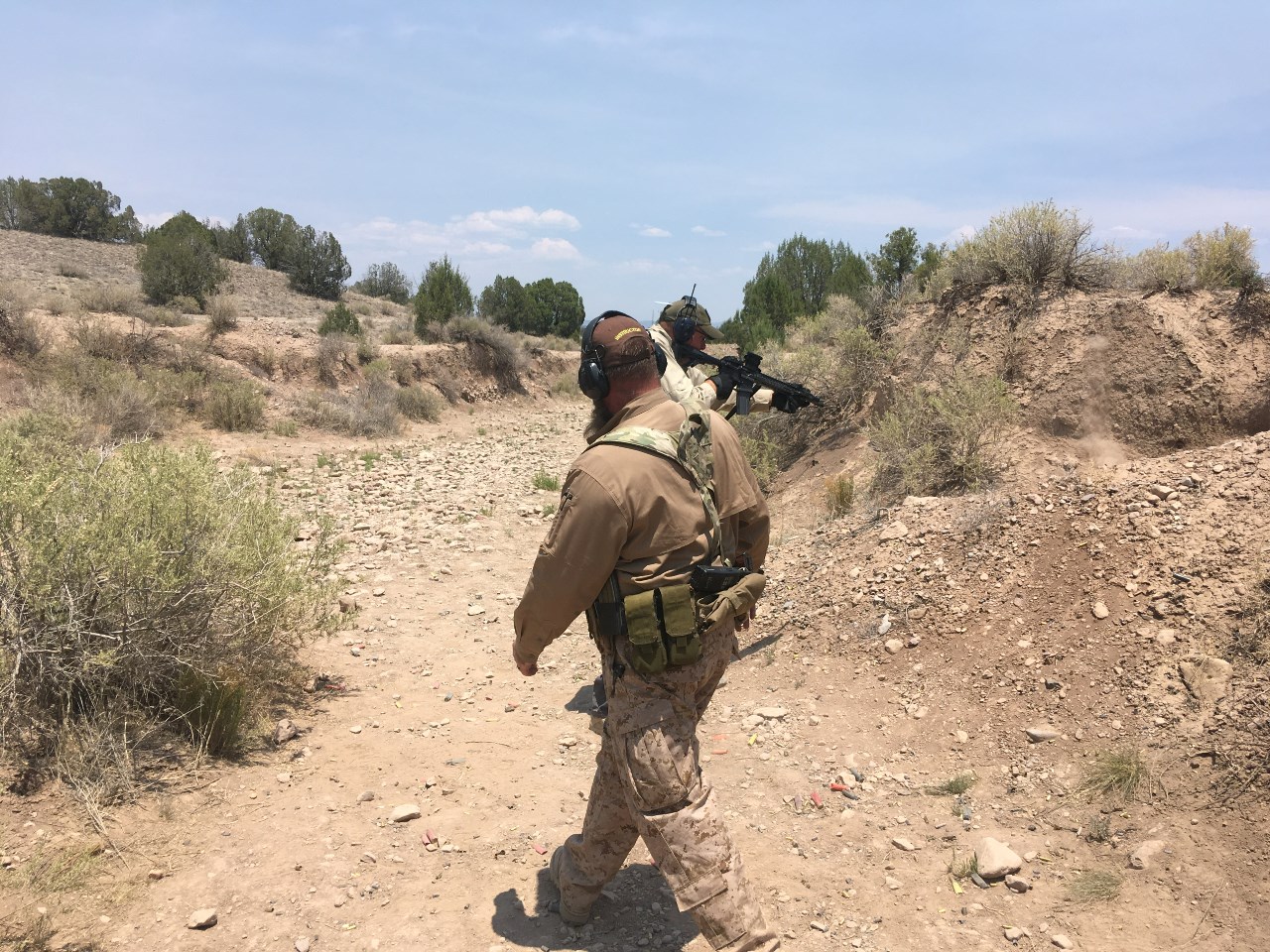 In the afternoon of Day four, we went to Scrambler South. This recently designed range is an outdoor simulator with steel targets at various ranges. Because the topology is mostly flat, targets aren’t hiding in corners, and it’s on you to identify them quickly and then engage them.  “Up until now, we’ve had you going slowly in simulators to build your skills”, said our Range-Master. “This time I want you to move with purpose.”  So instead of step-look, step-look, I did this course almost entirely on the move, going to kneeling for two of the farther targets.  My skills with the PDX were coming together.

I ran the PDX all week without cleaning it to see how the system would hold up (though I did lube the bolt carrier twice a day). On the morning of day five I got failures to fire: light, almost nonexistent strikes on the primer – no matter which ammunition I used. Breaking the upper receiver down and disassembling the bolt group I found black, plastic-like goo in the firing pin channel and on the firing pin. I cleaned this and the gun returned to working order. It is possible that the shellac on the Wolf ammo cases had found its way into the firing pin channel, building up over time.

The Maxim Defense PDX is a superior weapon, especially for its role as a CQB platform.  It’s extremely well built, with excellent fit and finish.  It’s as accurate as the round it shoots can be.  It was most reliable in its 5-inch configuration, and the placement of the controls were immediately familiar to me. It’s light and handy and will hit targets with authority out to the limit of the cartridge. It delivers a stronger blow in 7.62×39 mm than in 5.56 NATO, in my opinion. It deserves your consideration either in braced pistol format or as an SBR.