August 17, 2022 Guns In The News
Home»Commentary»The Remington 870: Greatest Pump Shotgun Ever Made?
Commentary

This article, “Tops In the Blind & Field: The Remington 870,” appeared originally in the September 2003 issue of American Rifleman. To subscribe to the magazine, visit the NRA membership page here and select American Rifleman as your member magazine.

The beginning of the second half of the 20th century was a milestone product year for the Remington Arms Co. It was in 1950 that “America’s Oldest Gunmaker” introduced what many believe is the finest pump shotgun ever produced: the Model 870.

Produced in large numbers every year since, the Model 870 has become the most successful single firearm model in Remington’s more-than-200-year history and the best selling pump-action shotgun in firearms history. Remington calls it “the Wingmaster.”

Three years earlier, Remington design engineers began working on a replacement for the rugged, but outdated, Model 31 pump-action shotgun. Utilizing common parts from the sleek, new Model 11-48 autoloader, L. Ray Crittendon, Phillip Haskell, Ellis Hailston and G. E. Pinckney developed a new pump-action that would later be called the Model 870. Like the Model 11-48, the Model 870 Wingmaster shotgun, introduced in January 1950, had a breech locked securely in a hardened barrel extension, and a new locking block and slide were devised for a smooth and effective operation.

The following is a chronological history of the initial specifications and subsequent additions to this versatile and stalwart shotgun from 1950 up to 2003. The prices shown, sadly, are suggested retail for the year of introduction and no longer apply. 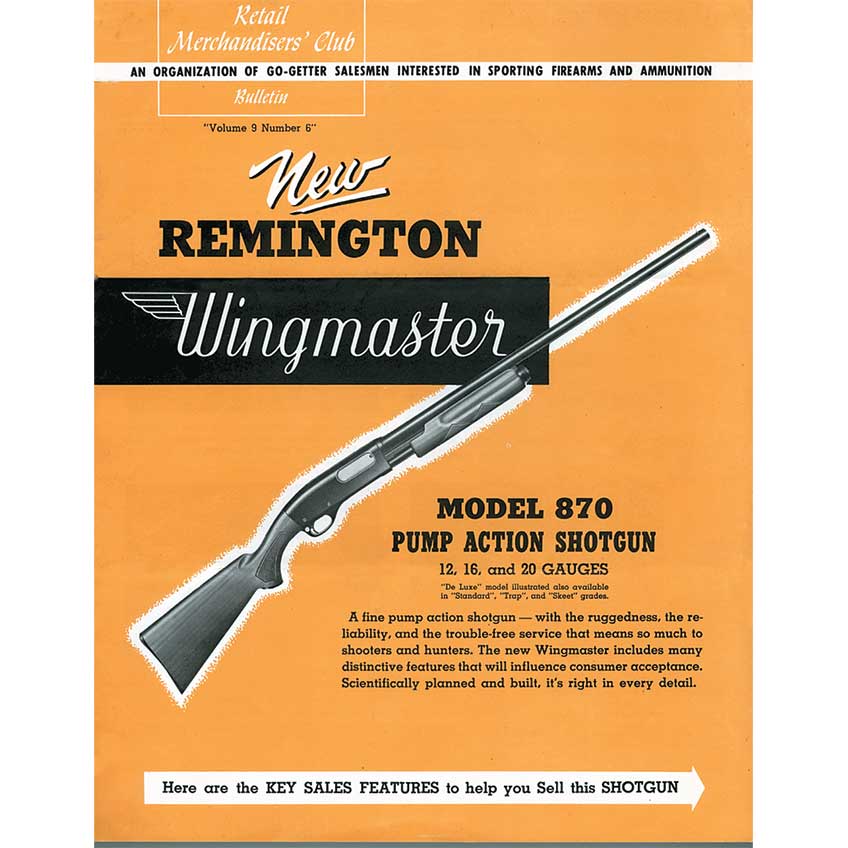 The Model 870, such as this Model 870 Police, has been a staple of law enforcement agencies for decades. The 870 has also seen military service as the Model 870 Mk-1, adopted by the Marine Corps in 1969.

1963: Remington produced the Model 870 in a new “deluxe grade” for all field models with custom checkering and improved wood finish. 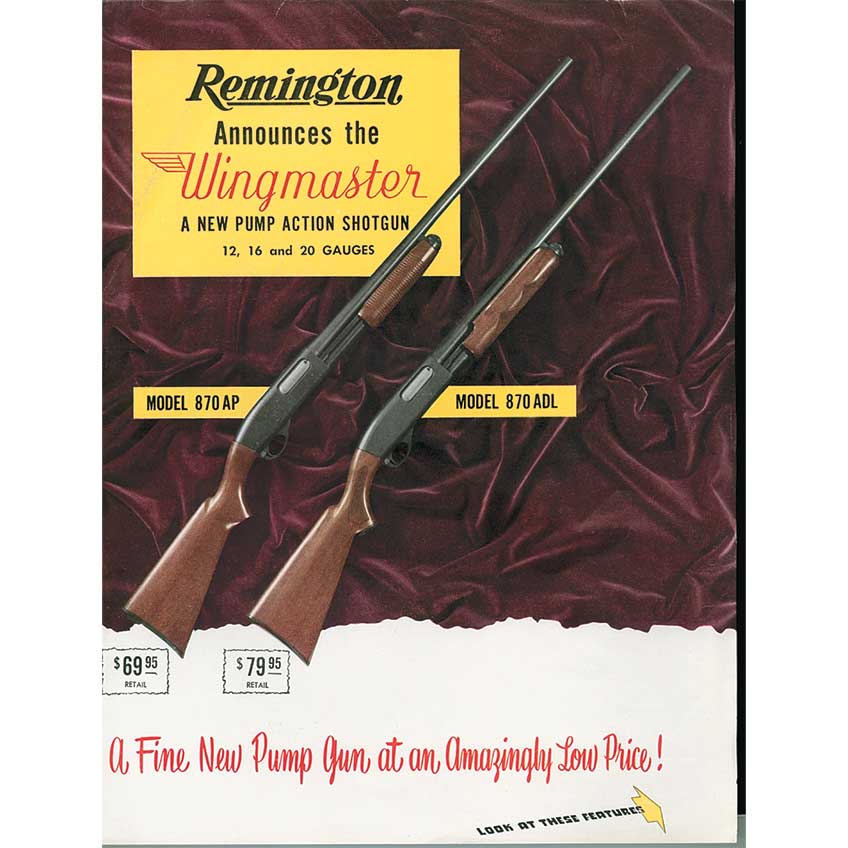 1966: In this year, Remington announced the sale of the 1,000,000th Model 870 shotgun. The year 1966 also marked Remington’s 150th Anniversary, going back to 1816, when young Eliphalet fabricated his first gun barrel, giving birth to an industry. Alongside local festivities in Ilion, Remington introduced several commemorative firearms with the 150th Anniversary seal stamped on the receiver, including the Model 870 150th Anniversary Edition Shotgun. Some 2,534 would be sold over the following two years. 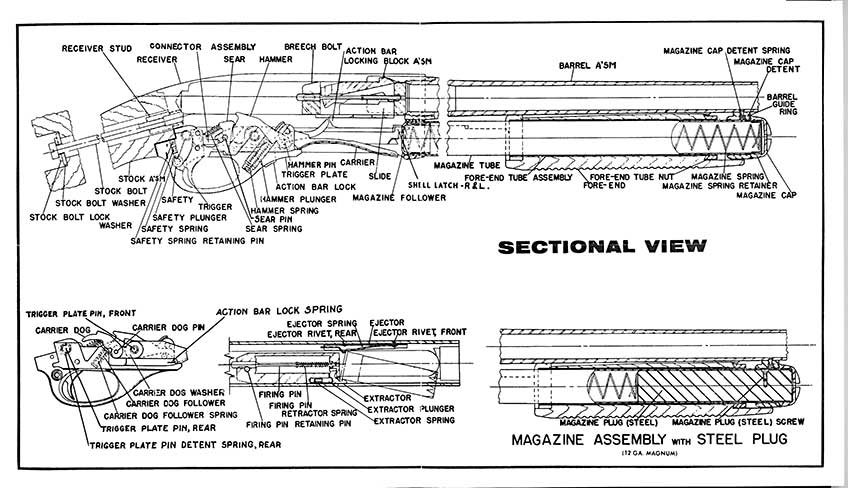 1972: Remington introduced the Model 870 “All American” Special Trap Gun, advertising it as “the finest pump-action shotgun we’ve ever made,” and sold the custom, engraved gun with its protective case for $550. Also, Remington introduced the 20-ga. Lightweight Model 870 in both standard and magnum versions, with scaled-down receivers and mahogany stocks and fore-ends. It weighed only 5 lbs., 12 ozs. Prices ranged from $139.95 for a plain barrel version to $184.95 for the 3” magnum model with ventilated-rib barrel. 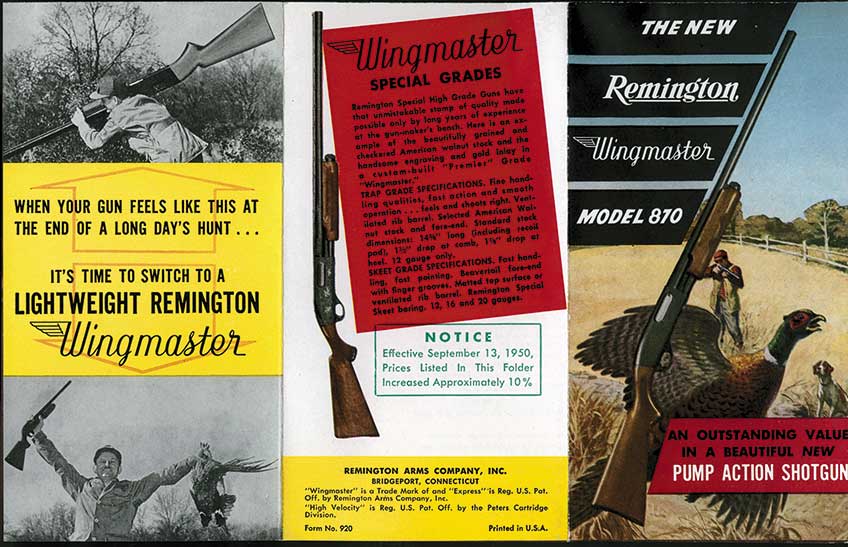 This humorous circa 1950 Remington advertising flier touted the virtues of the company’s “Lightweight Remington Wingmaster,” which tipped the scales at 63⁄4 lbs. in 12 gauge. During that same period, the plain-Jane Model 870 AP sold for $69.95, while the Deluxe Grade 870 ADL, with a checkered beavertail fore-end and pistol grip (and a ”decorative grip cap”) sold for $10 more.

1973: In October, Remington ­proudly announced production of
the 2 millionth Model 870.

1974: Remington produced 10,000 12-ga., limited-edition Model 870 DU (Ducks Unlimited) shotguns, “commemorating Ducks Unlimited’s many years of service.” These shotguns sold for $132.47 and featured specially decorated receivers and a selected block of serial numbers followed by a DU suffix. Due to a shortage of American walnut, in mid-year 1974, Remington began fitting some Model 870 Field Grade shotguns with lightweight mahogany stocks and fore-ends.

1978: In May, Remington announced the production of its 3 millionth Model 870. In this year, the “All American” Trap Guns were discontinued. The Model 870 Trap line was altered to include three grades of increasing quality: TA, TB and TC. Remington also introduced a 20-ga. Model 870 LW-20 Lightweight Deer Gun. 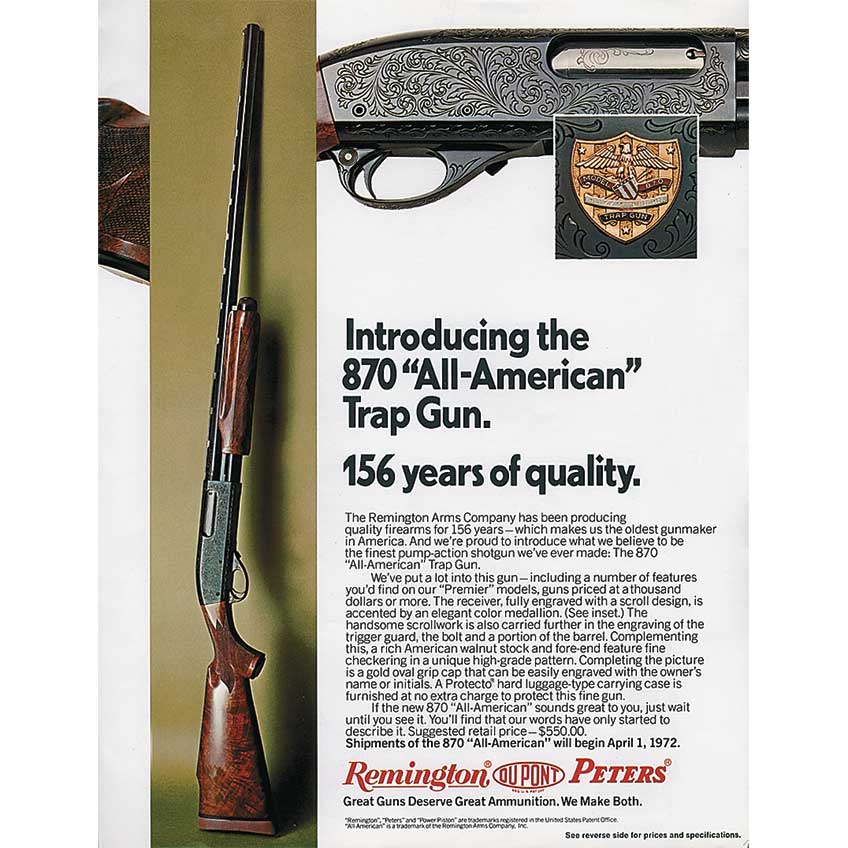 1980: Remington introduced a new stock styling and checkering pattern on all Model 870 shotguns.

1984: Remington announced its 4 millionth Model 870. The company also introduced the Model 870 “Special Field” in 12- and 20-ga. versions, with checkered, straight English-style stocks (no pistol grips) and 21” ventilated rib barrels in improved cylinder, modified and full chokes. Remington also changed the name of the “Lightweight Limited” to the Model 870 20-ga. Lightweight “Youth Gun” with a change in barrel length to 21”. 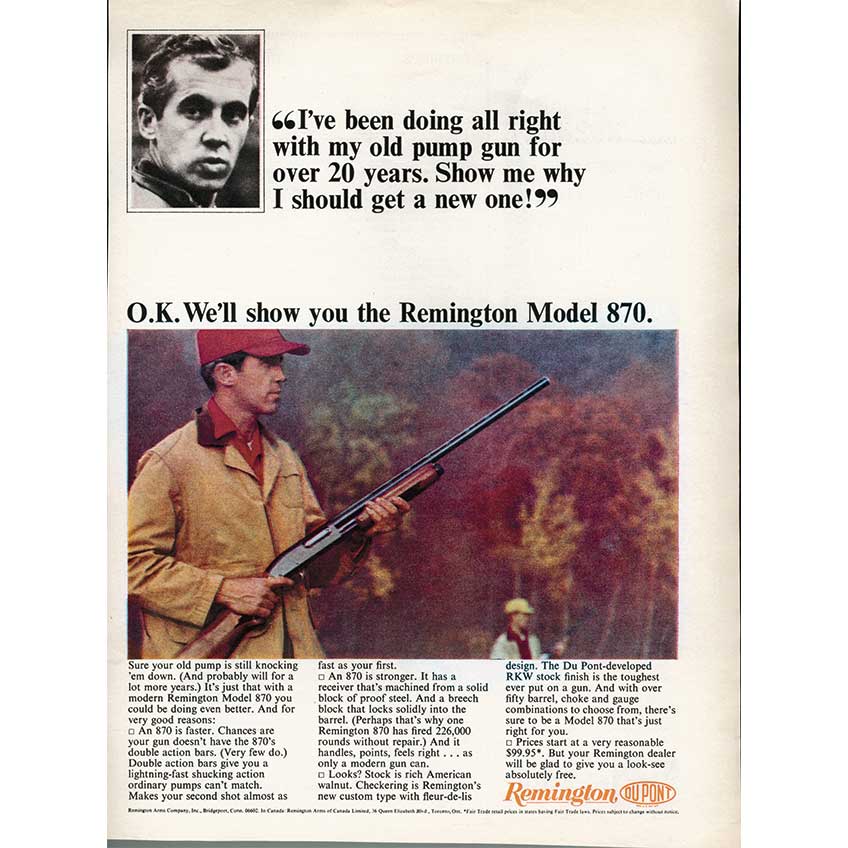 It was not available on 30” barrels, deer guns, target guns or as a retrofit. This patented system allows the shooter to use a wrench to change the shotgun to full, modified or improved cylinder chokes. Remington also added the 12-ga. Model 870 SP Special Purpose Deer Gun to the Deer Gun line. 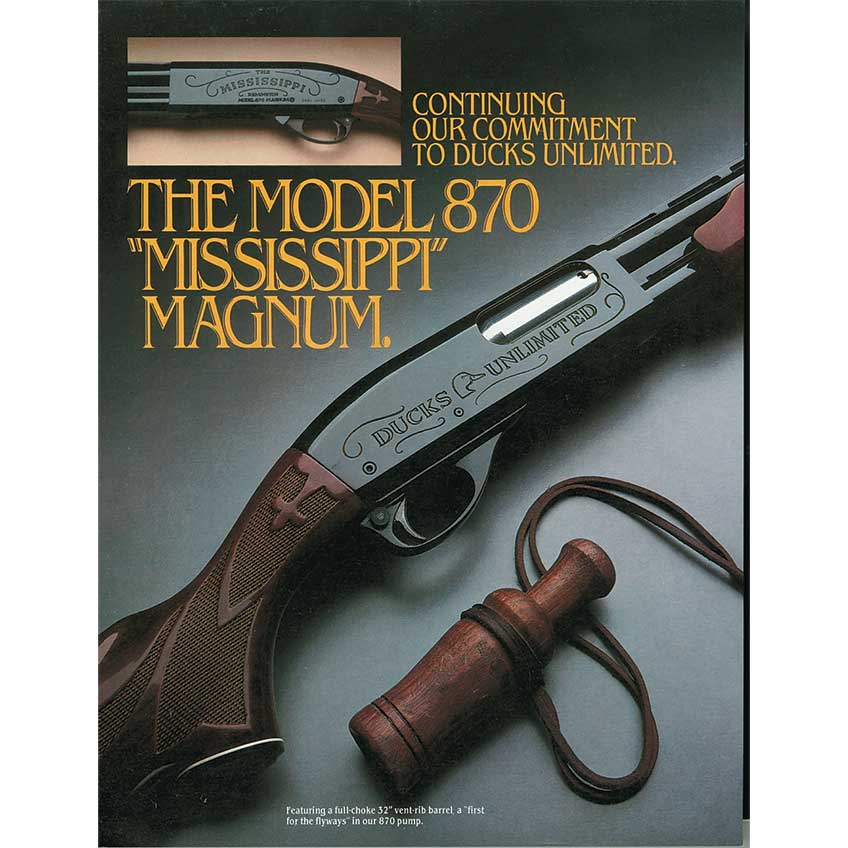 1987: Remington introduced the lower-cost Model 870 Express, which differs from the standard 870 line only in exterior matte finish and low luster hardwood stock and fore-end. The Rem Choke system was now added to Model 870 12-ga. and 20-ga. shotguns. The Special Purpose line was ex­panded to include the Model 870 SP with a 3” chamber, ventilated rib barrel and Rem Chokes. In this year, the Model 870 Deer Gun was made available in right- and left-hand versions in “Wingmaster” style.

1988: Remington introduced a Model 870 Express Combo with a 20” slug barrel and a 28” ventilated rib barrel. The Model 870 TC Trap Grade shotgun received a new stock style and dimensions, and a new 31” overbored barrel with the Rem Choke system or a fixed full choke.

1989: Special Purpose stocks and fore-ends were changed to American walnut, and a cantilever scope mount option was added to the 12-ga. Deer Gun line. 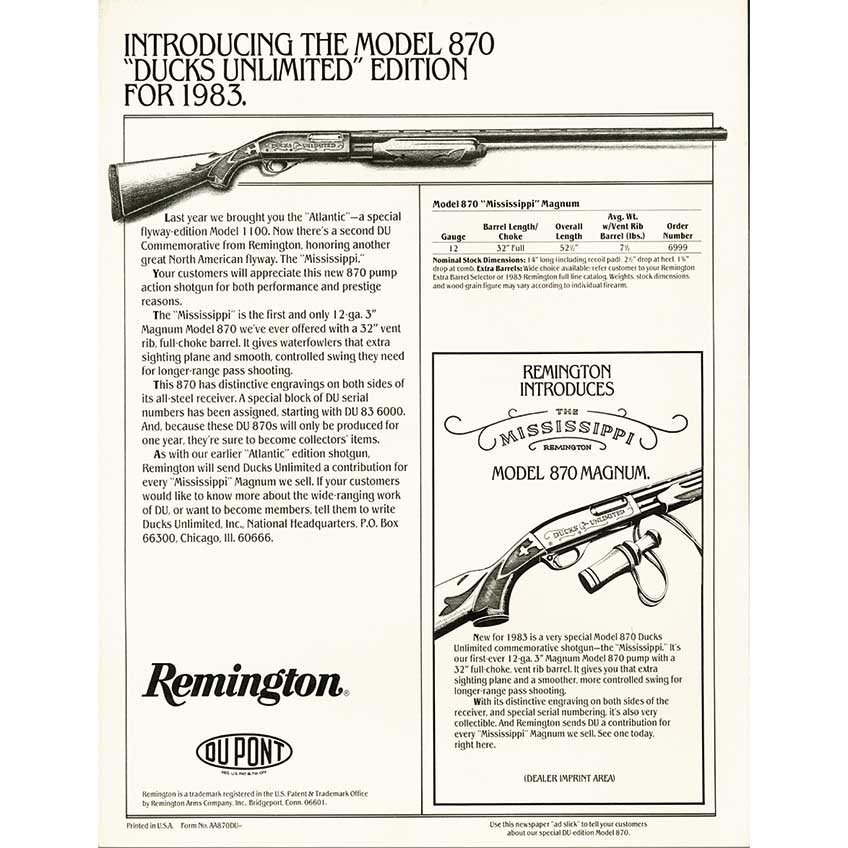 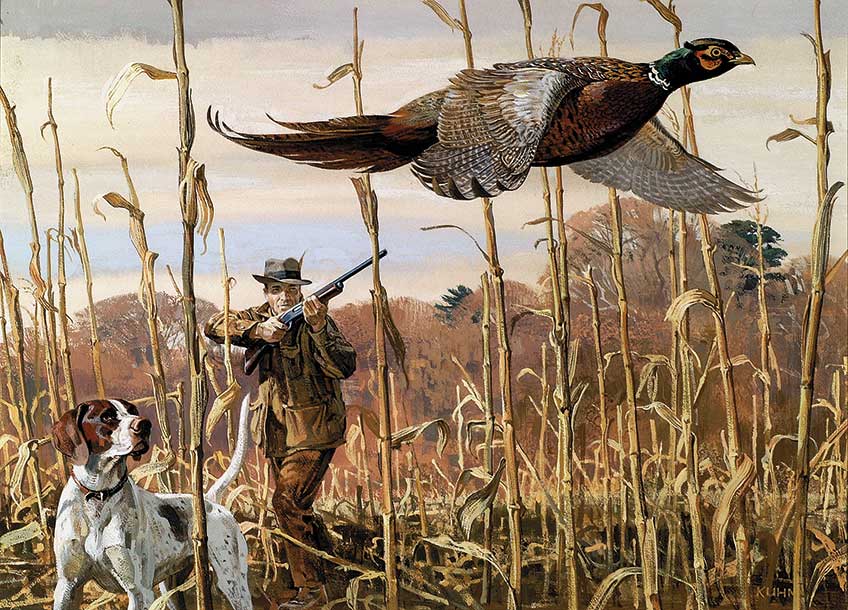 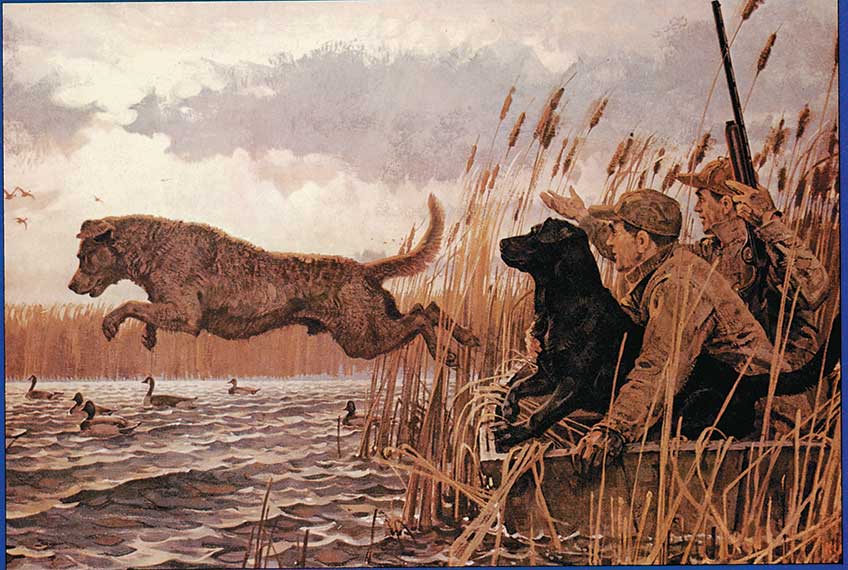 The company also expanded its Express line with the Model 870 Express Super Magnum Turkey Gun, featuring a 12-ga., 31⁄2” chamber, extra-full Rem Choke 23” barrel and a black syn­thetic stock and fore-end ($259) and the Model 870 Express Synthetic Deer Gun with a 20”, fully rifled barrel with adjustable rifle sights, and a matte black finish on all exposed metal parts and black synthetic stock and fore-end ($365).

All in all, the Remington Model 870 shotgun has earned its reputation as the greatest selling pump shotgun in firearm history. This achievement was made possible by a rock-solid design and innovative Remington management, which has introduced dozens of variations over a 53-year history to satisfy millions of shotgunners. There are so many variations, it seems, that the Model 870 has become a collecting field all by itself.