June 29, 2022 Guns In The News
Home»Commentary»The Straight-Pull Rifle: From Past To Present
Commentary

The Straight-Pull Rifle: From Past To Present

Savage made headlines when it released its Impulse straight-pull bolt-action hunting rifle earlier this year. While designs like the Impulse represent the pinnacle of contemporary rifle technology, straight-pull bolt-action rifles are nearly as old as self-contained cartridge firing guns themselves, and their story provides interesting insights into the development of the modern rifle.

The turning bolt action mechanism for firearms got its start with the Dreyse “Needle Gun” of 1836. While the Prussian military adopted the Dreyse design in 1841, it would not be until another European nation was at the wrong end of the Needle Gun during the 1866 Austro-Prussian War, that the earth-shattering impact of the bolt-action breechloader would be realized. In a military world of muzzleloading muskets, other countries quickly moved to adopt their own version of a quick-firing, breechloading rifle that used a self-contained cartridge.

The Dreyse was quickly outclassed by designs like the French 1866 Chassepot, which led to new rifles from inventors like Paul Mauser, James Paris Lee and Ferdinand Mannlicher, and the bolt-action rifle would become the dominate frontline infantry rifle until the end of World War II.

By the 1880s, several inventors were experimenting with straight-pull, bolt-action designs. The idea was rapidity of fire. While a turn-bolt required four motions to load, a straight-pull required only two—pull back and push forward. Four major straight-pull systems would be adopted for military use —the Lee, Mannlicher, Ross and Schmidt.

It was Mannlicher who perfected the first successful straight-pull rifle, when the Austro-Hungarian Empire adopted his design in 1886. The rifle fired a low-pressure, black-powder cartridge that could be contained by a wedge that dropped down from the rear of the bolt to lock into the receiver. The rear portion of the two-piece bolt forced the wedge into position.

The introduction of smokeless-powder cartridges would require a stronger action. Mannlicher updated his design, as the Model 1895, to feature front locking lugs mounted on a rotating bolt body that rode inside a bolt sleeve, to which the handle was attached. The bolt body had helical cuts in it, and cams inside the bolt sleeve caused the lugs to rotate to lock or unlock as the handle was moved forward and backward. Adopted as the M95, the rifle would serve the Austro-Hungarian Empire throughout World War I, and continue to serve the nations created by that empire’s disintegration through World War II.

A Steyr Mannlicher M95 straight-pull, bolt-action carbine made for a Yugoslavian contract.

When the Swiss were looking for a modern rifle in the 1880s, they chose the straight-pull design by Rudolf Schmidt paired with the high-velocity, smokeless-powder cartridge designed by Eduard Rubin. The Schmidt-Rubin 1889 used a bolt that was contained in a locking sleeve. The sleeve was rotated by a cam attached to the bolt handle to unlock its lugs.

As Swiss ammunition became more powerful, the Schmidt action was redesigned for strength and to shorten its overall length (the Swiss had adopted a version of the Mannlicher straight-pull to arm its cavalry troopers with a more compact weapon). The new design was adopted in 1911. The final Swiss straight-pull rifle was adopted in 1931. While the K31 rifle was based on the basic architecture of the Schmidt design, Rudolf Schmidt was not involved in its development.

James Paris Lee was a Canadian-American designer, whose firearm innovations included the detachable box magazine and a turn-bolt rifle that would eventually evolve into the Lee-Enfield. Lee also designed a straight-pull rifle that used a tilting bolt system. Pulling the bolt handle swung it in an arc (an action that some would argue is not technically “straight pull”) that cammed the rear of the bolt up to unlock it and allow it to fully open. Lee’s design was adopted as the Model 1895 Lee Navy produced by Winchester for the U.S. Navy. It fired a special 6 mm cartridge that launched its 135-grain bullet at 2,550 f.p.s. Versions of the 1895 Colt-Browning Machine Gun were also chambered in the cartridge.

A Model 1895 Winchester Lee straight-pull Navy rifle, with the bolt fully retracted to the rear and a charger clip of cartridges inserted.

The Canadian’s adoption of the Ross rifle stemmed from the British refusal to license production of the Lee-Enfield in Canada. The Canadians, in response, went with a native sporting rifle design by Sir Charles Ross. The Ross rifle followed the cues of the Steyr M95 by using a bolt sleeve with attached handle that rotated a bolt body with front locking lugs. While renowned for its accuracy, the close tolerances of the Ross design resulted in its failure in World War I. The Mk III version of the rifle was infamous for the fact that its bolt could be improperly assembled, allowing the rifle to fire while unlocked. The Ross rifle would also serve the British and the Americans in World War I, and would be supplied to the newly formed Baltic states following the war’s conclusion.

The action of a Model 1910 Ross straight-pull rifle with the bolt fully retracted.

While military straight-pulls had some notable successes, they lost out to the turn-bolts, which were simpler, cheaper and more rugged. The Lee barely lasted a decade in front-line service (during which time it served in the Spanish-American War, Philippine Insurrection and Boxer Rebellion) before it was replaced by the Springfield Model 1903. The Ross would not survive World War I. Its failures in the mud of trenches meant that the Canadians were replacing it with Lee-Enfields by 1916.

The Austro-Hungarian Empire had already decided to replace the Mannlicher M95 with a turn-bolt Mauser design before its plans were interrupted by World War I. The M95 would go on to be the most successful straight-pull design, out of necessity rather than superiority, with nearly 3.5 million produced. The straight-pull lasted longest in the service of the Swiss, who kept their straight-pull rifles for 70 years, though the fiercely neutral Swiss never fired their rifles in anger. 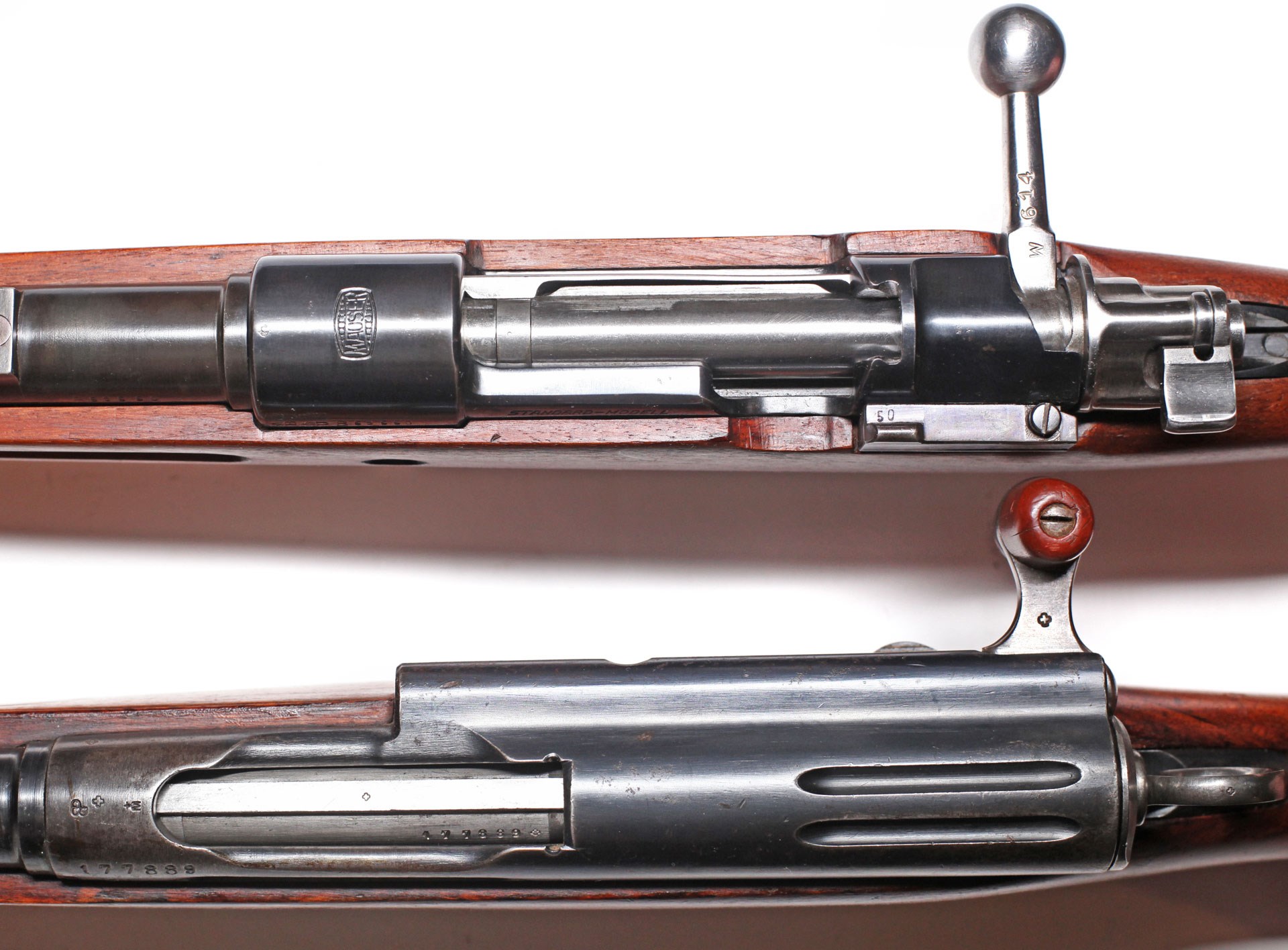 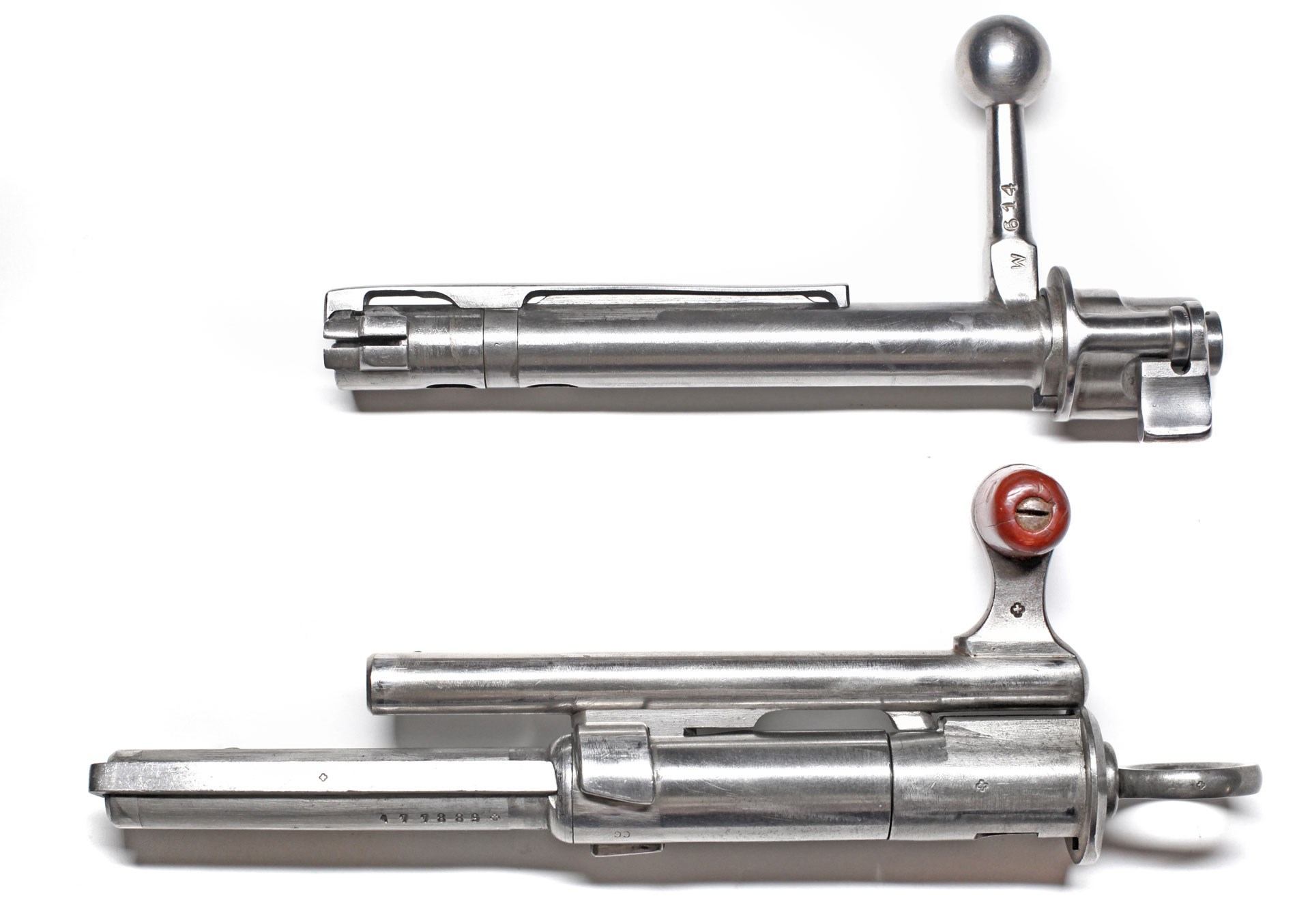 While the straight-pull had fallen out of military favor, it fulfilled a small niche in hunting and competitive circles where quick follow-up shots were necessary. Sporting versions of the Ross, both in hunting and match form, were produced until 1918. Ross also made a rimfire “Cadet” straight-pull. About 1,700 of the 20,000 Lee straight-pulls produced by Winchester were made as commercial sporting rifles.

American inventor Charles Newton, famous for his high-velocity wildcat cartridges, developed a “Leverbolt” straight-pull rifle that used a pivoting lever similar to the Lee and promised “all the strength and simplicity of the bolt action type combined with the speed and ease of operation of the lever action.” The Leverbolt never made it beyond the prototype stage before Newton’s company folded.

In competitions, such as the running deer or boar shooting contests where a shooter had to score multiple hits on a moving target, straight-pulls were popular. Many of these early straight-pull competition rifles used reworked Ross actions. The straight-pull has also found success in the rimfire world. In 1965 Browning debuted a rimfire straight-pull, known as the T-Bolt. While the model was discontinued in 1974, it was modernized and re-introduced in 2009.

By the mid-1970s, the need for speed was pushing rimfire biathlon rifles to use the straight-pull action and in the next 15 years, designs by Anschütz, Izhmash and Krico were introduced. Anyone who’s ever watched a biathlon competition has noticed the speed of a rimfire straight-pull, where athletes work the action with a flick of the wrist, the trigger finger pushing the bolt open and the thumb pushing it closed, all while maintaining a shooting grip. 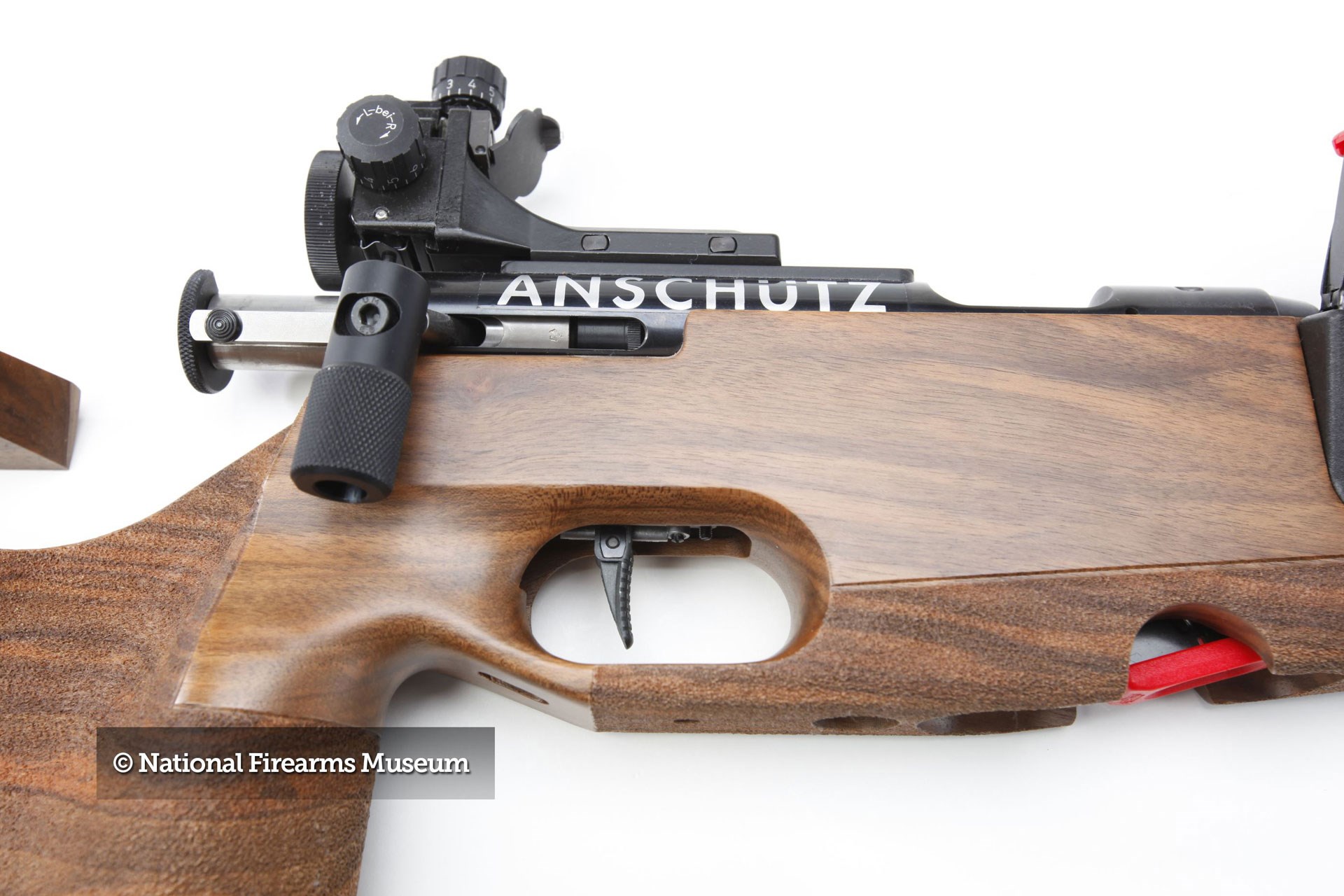 The Anschütz Model 1827 uses the Fortner straight-pull bolt-action system, shown with the bolt to the rear.

Along with competition rifles made by Anschütz and Izhmash, other currently produced straight-pull rimfires include the no-longer-imported Steyr Scout RFR (which used the ISSC Spa biathlon action) and the Volquartsen Summit.

Modern centerfire straight-pull bolt-action rifles are light years away from their early 20th century predecessors. One of the earliest modern straight-pulls was the Blaser R93, introduced in 1993. The Blaser used a revolutionary design, where an alloy chassis housed a bolt with 14 radial “collets” that expand and lock into the barrel. A modular design, bolt heads, magazine inserts and barrels could be interchanged by the user to switch calibers. 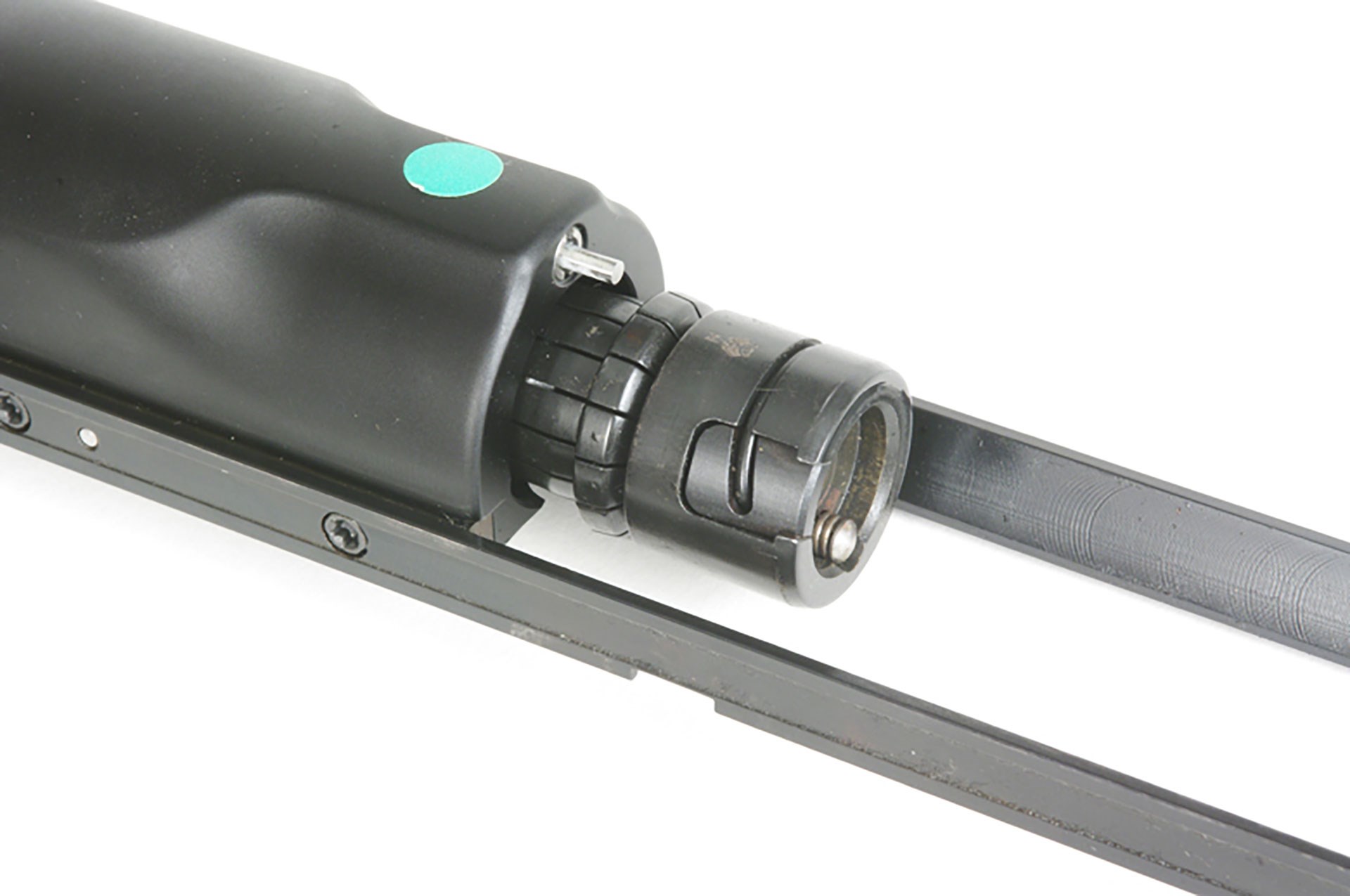 A close-up view of the Blaser R8 bolt showing the locking collets on the bolt.

The popularity of the Blaser led to a slew of new European straight-pull rifles, several of which have since been discontinued. Current straight-pull offerings include the Blaser R8, Beretta BRX1, Browning Maral, Heym SR30, Merkel Helix and Strasser RS14 (not all of these models are available in the U.S.) and, of course, the Savage Impulse.

With restrictions on semi-automatic firearms in many European countries and some U.S. states, there also exists a hybrid world where designs like the AR-15 (models made by LMT and POF) and Mini-14 are adapted into “straight-pull” rifles by removing the gas system. You pull the charging handle to the rear and release it to chamber a round with the “assist” of the action spring, just like you’re chambering the first round in a semi-automatic.

In the United Kingdom, a manually-operated version of their L85 infantry rifle, known as the L98 Cadet Rifle, is used for training purposes. Ironically, for many militaries to accept early semi-automatic rifles, such as the Mondragón (which evolved from a straight-pull design) the rifle had to be equipped with a switch that would allow them to be used as a manually-operated rifle. Others, such as the French Mle. 1917, were converted from semi-automatic to manually operated when they failed on the battlefield.

While bright ideas come and go in the firearms field, over 135 years after the first straight-pull bolt actions appeared on the scene, they’re still here. From original surplus rifles (vintage Mannlicher and Schmidt-Rubins are still showing up at affordable prices on the used market) to the Savage Impulse, which brings a modern design to the masses, the straight-pull continues to bring speed and cutting-edge technology to the bolt action realm. 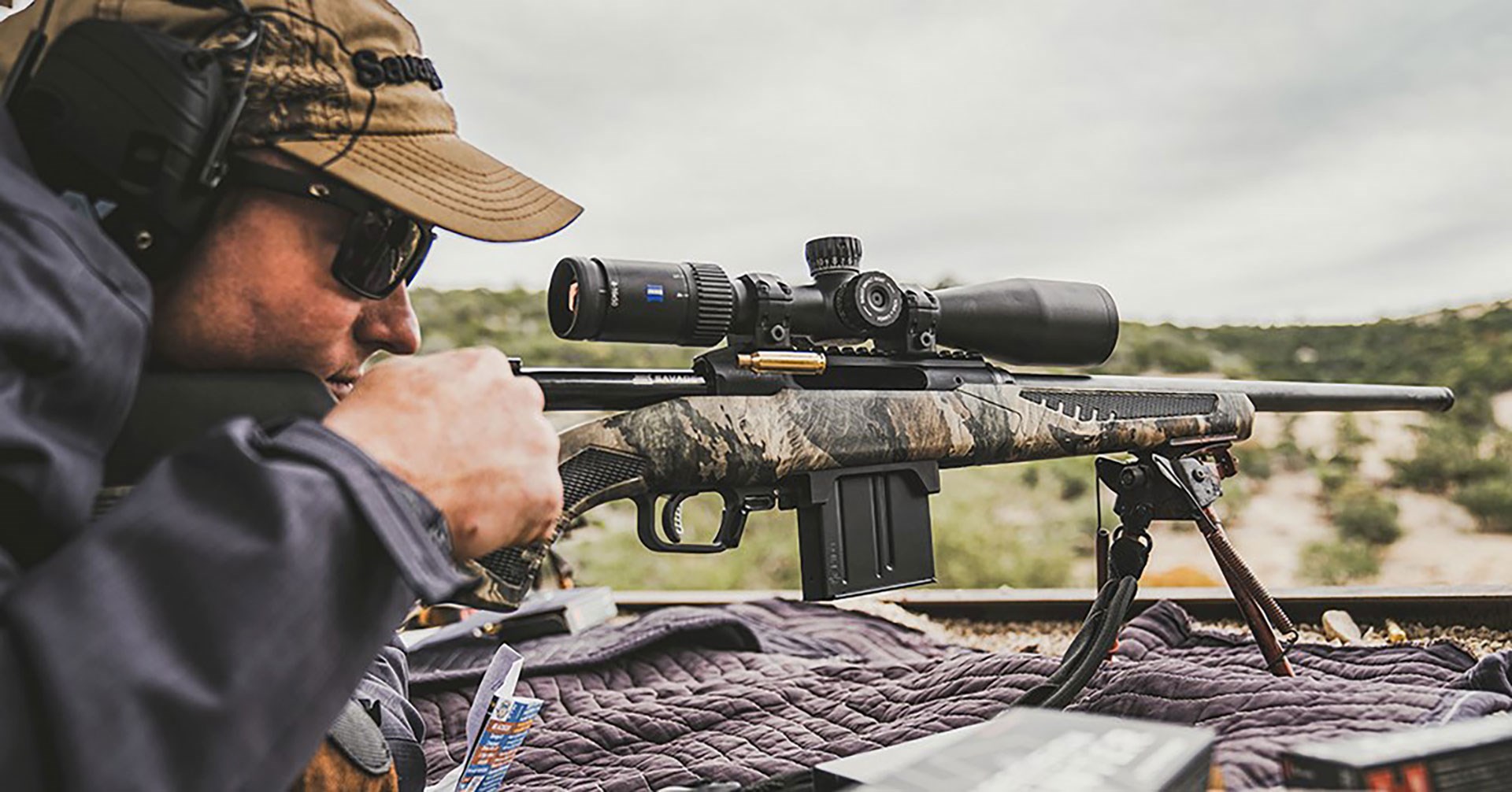 The Savage Impulse in action.

At the recent SHOT Show, two new straight-pull rifles were on display for the American market, the MBA from Black Collar Arms and the spring-assisted, AR-10-based BA30 from Bushmaster firearms. Maybe the Impulse has taught us Americans something the Europeans have known for a long time. Could 2022 be “The Year of the Straight-Pull?”

The Straight-Pull Rifle: From Past To Present

When Anti-Gun Legislators are Carjacked