For almost a half-century, the bolt-action rifle reigned supreme in America’s military small-arms arsenal. The long-lived use of the bolt-action was, by no means, unique to the United States. Almost without exception, the bolt-action military rifle was a staple in the arsenals of most industrialized nations from the late 1800s through the Second World War.

The United States’ first standardized bolt-action service rifle was the .30-40 Krag-Jorgenson, adopted in 1892 and put into production at the Springfield Armory two years later. The Krag was followed by the legendary Model of 1903 Springfield, which saw widespread service in both World Wars. The ’03 was augmented during World War I by another bolt-action rifle, the U.S. Model of 1917 “American Enfield.” Even after adoption of the semi-automatic M1 Garand rifle in 1936, the U.S. military relied heavily on bolt-action rifles throughout World War II. And today, bolt-action rifles remain in use by the American military as sniping arms in Iraq and Afghanistan.

Although the Krag was America’s first standardized bolt-action service rifle, it was not the first bolt-action utilized by our armed forces. From the late 1870s through the late 1880s, several types of bolt-action rifles were procured for testing, evaluation and limited issue by the U.S. Army, Navy and Marine Corps. These arms were the Hotchkiss, Remington-Lee, Remington-Keene and Chaffee-Reese, which were chambered for the same blackpowder .45-70 Gov’t cartridge used by the Model of 1873 “Trapdoor” Springfield. The Model of 1895 Winchester 6 mm U.S. Navy (Lee-Navy) rifle, which featured an unusual straight-pull bolt and clip-loading capability, was adopted in 1895. It was employed during the Spanish-American War and for a couple of years afterward.

Although these early repeating, bolt-action American military rifles may not be extremely well-known today, they were preceded by an even lesser-known bolt-action, the Model of 1871 Ward-Burton.

The genesis of the Ward-Burton occurred during the first few years following the conclusion of the War Between the States. After Appomattox, the U.S. Army had a large number of serviceable, but obsolete, muzzleloading rifle-muskets in its inventory. Since funds were tight in the immediate post-war period, the Ordnance Department chose to convert some of these surplus muzzleloaders into breechloaders. A conversion devised by Springfield Armory Master Armorer Erskine S. Allin was used to convert the leftover rifle-muskets. This was accomplished by milling out the top rear portion of the muzzleloader’s barrel and attaching a hinged breechblock. The altered arms were dubbed “Allin Conversions.” The Model of 1865 utilized a .58-cal., rimfire metallic cartridge and was the first of the so-called “Trapdoor Springfields.” The Model of 1865 was soon superseded by the much-improved Model of 1866, which featured a simpler breech mechanism and a greatly superior cartridge, the .50-70 Gov’t. The Model of 1866 was followed by another .50-70 Trapdoor Springfield, the Model of 1868, which utilized a newly made receiver rather than one fabricated from surplus muzzleloaders as were the previous two Allin Conversions.

Although a quantum leap forward as compared to the ponderous muzzleloaders, the Allin-designed Trapdoor was intended to be an interim arm until an improved breechloading system could be developed. The period of 1870 to 1872 was a time of experimentation and uncertainty for the U.S. Army Ordnance Department. It was clear that the muzzleloader was woefully out-of-date and that the breechloader was the future of military rifles. It was not certain, however, exactly what would be the optimum breechloading mechanism with which to arm the U.S. military.

To this end, the Ordnance Department encouraged submission of various designs so that the most promising could be field tested and evaluated for possible adoption as an improved breechloading service rifle. Four basic breechloading mechanisms were eventually selected for limited production and evaluation. Funds were appropriated by Congress for these designs to be manufactured by the Springfield Armory for trial and field testing. All were chambered for the standard .50-70 rifle cartridge (or its carbine equivalent), while the barrels and most of the furniture were finished in “National Armory Bright.” These arms were:

(3) The Model of 1870 Springfield/Sharps—The Sharps was a popular civilian arm that had previously seen military use in the Civil War. A number of Civil
War-era percussion Sharps were modified after the war to chamber the .50-70 center-fire metallic cartridge, and a fair number, mainly Model of 1867 Carbines, were already in service with the U.S. Army. Most of the M1870 trial arms utilized modified Sharps percussion receivers, but 300 newly made actions were used by Springfield Armory to assemble some of the later trial rifles. With the exception of the basic Sharps action, Springfield produced the balance of the components. Total production of the M1870 Springfield/Sharps trial guns amounted to 1,300 rifles and 308 carbines.

(4) The Model of 1871 Ward-Burton Bolt-Action—The U.S. Springfield Armory produced 1,011 rifles and 316 carbines of the Ward-Burton pattern.

The above arms were each entirely different breechloading designs that enabled the Ordnance Department to evaluate the attributes—positive and negative—of the various mechanisms. The Trapdoor Springfield, Sharps and Rolling Block were, in varying degrees, familiar due to their prior U.S. military and civilian use. On the other hand, the bolt-action Ward-Burton was something of an unknown to the soldiers charged with its testing. 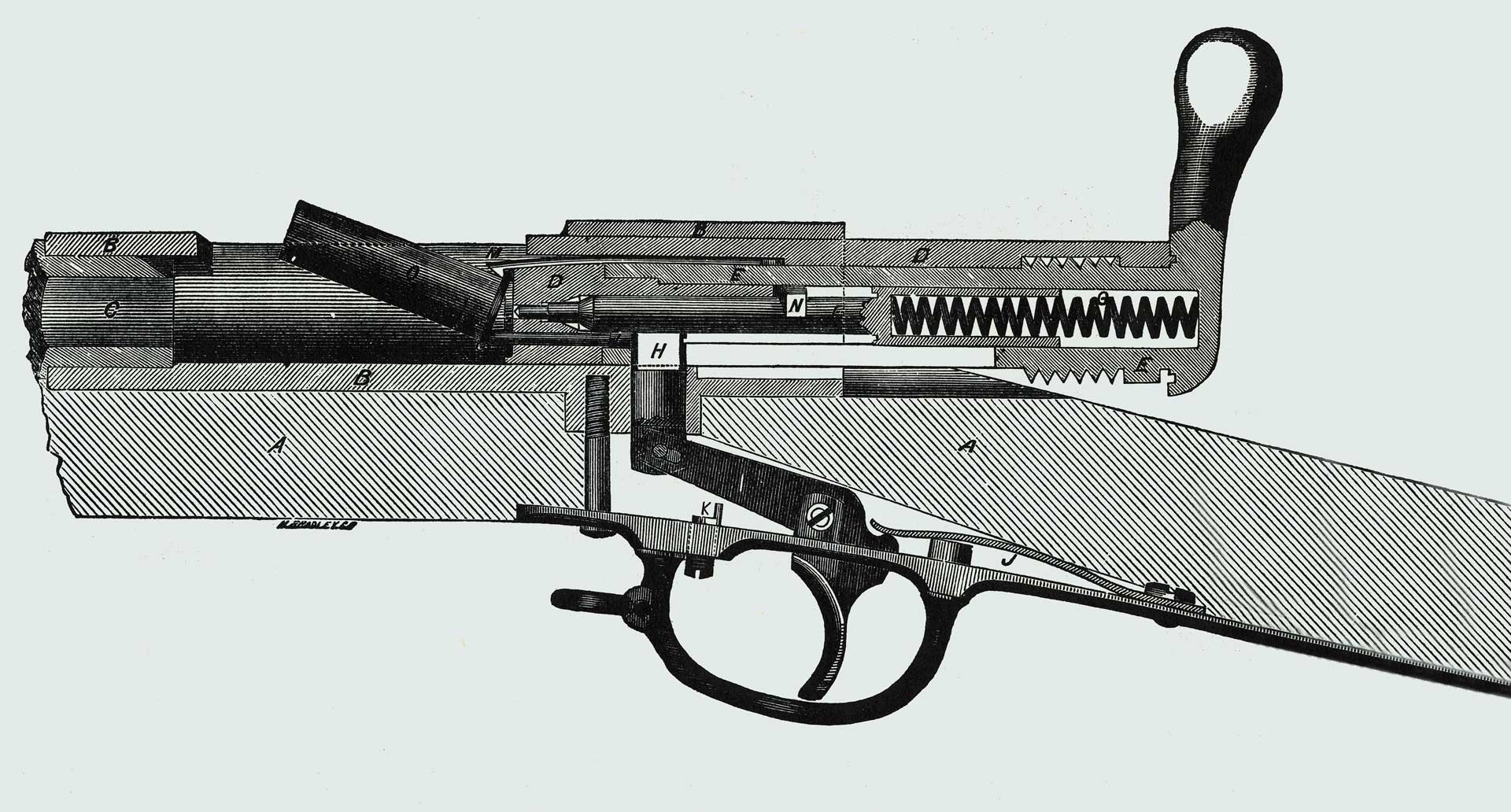 For the record, there were two “quasi bolt-action” U.S. military arms that predated the Ward-Burton. The Greene breechloading percussion rifle, made in very limited numbers from about 1859 into the early 1860s, featured a unique under-hammer action with a rudimentary bolt-operated mechanism. The Palmer carbine of the Civil War era utilized a bolt to open the chamber, but it was fired by means of a separate, side-mounted hammer. Neither were designed with what can be accurately characterized as a true bolt-action mechanism. Like virtually all subsequent modern bolt-action rifles, the Ward-Burton had the striker, ejector and extractor self-contained in the bolt body. While the norm for bolt-action designs today, this was a novel, if not radical, mechanism in the early 1870s.

The Ward-Burton was invented and patented by two Americans, Gen. W.G. Ward and Bethel Burton. The Ward-Burton rifle was a single-shot design that featured a bolt with two sets of threads on either side of the body that locked into corresponding threads machined into the inside of the receiver. The stubby bolt handle rotated downward to lock the action and rotated upward to disengage.

When the bolt was drawn to the rear, the empty cartridge case was automatically ejected, and the rifle was ready for a fresh cartridge to be inserted. It was cocked when the bolt was pushed forward. There was a small, spring-loaded bolt lock on the right rear of the receiver that functioned as a safety.

The Model of 1871 Ward-Burton was in production at Springfield Armory in 1871 and 1872. The receiver was case-hardened, and the left side was marked “WARD BURTON PATENT, DEC.20,1859, FEB.21.1871” with a “spread eagle” over “U.S. SPRINGFIELD 1871.” They were not serially numbered. The barrel and most of the furniture were finished in “National Armory Bright,” as were the other trial arms of the period. The Ward-Burton rifle had a 32 1⁄8″ barrel secured to the full-length stock by two barrel bands and was fitted with a folding-leaf rear sight. It had the same type of cleaning rod as the Model of 1868 Trapdoor Springfield rifle. The Ward-Burton rifle was issued with the Model of 1855 socket bayonet and also used the same type of leather sling as the .50-70 Trapdoor Springfield rifles.

The Model of 1871 Ward-Burton carbine had a 22″ barrel secured by a single barrel band to an appropriately shortened stock. It was fitted with a ring-and-bar attachment on the left side of the stock similar to the other Springfield Armory carbines of the era. The stocks of both the Ward-Burton rifle and carbine were typically marked with two different inspection stamps: “ESA” (Erskine S. Allin) and “JWK” (John W. Keene). Ward-Burton rifles and carbines were stamped “US’ on their buttplate tangs. With the obvious exception of the bolt-action mechanism, the Ward-Burton shared many of the same features as the Model of 1870 Trapdoor Springfield. 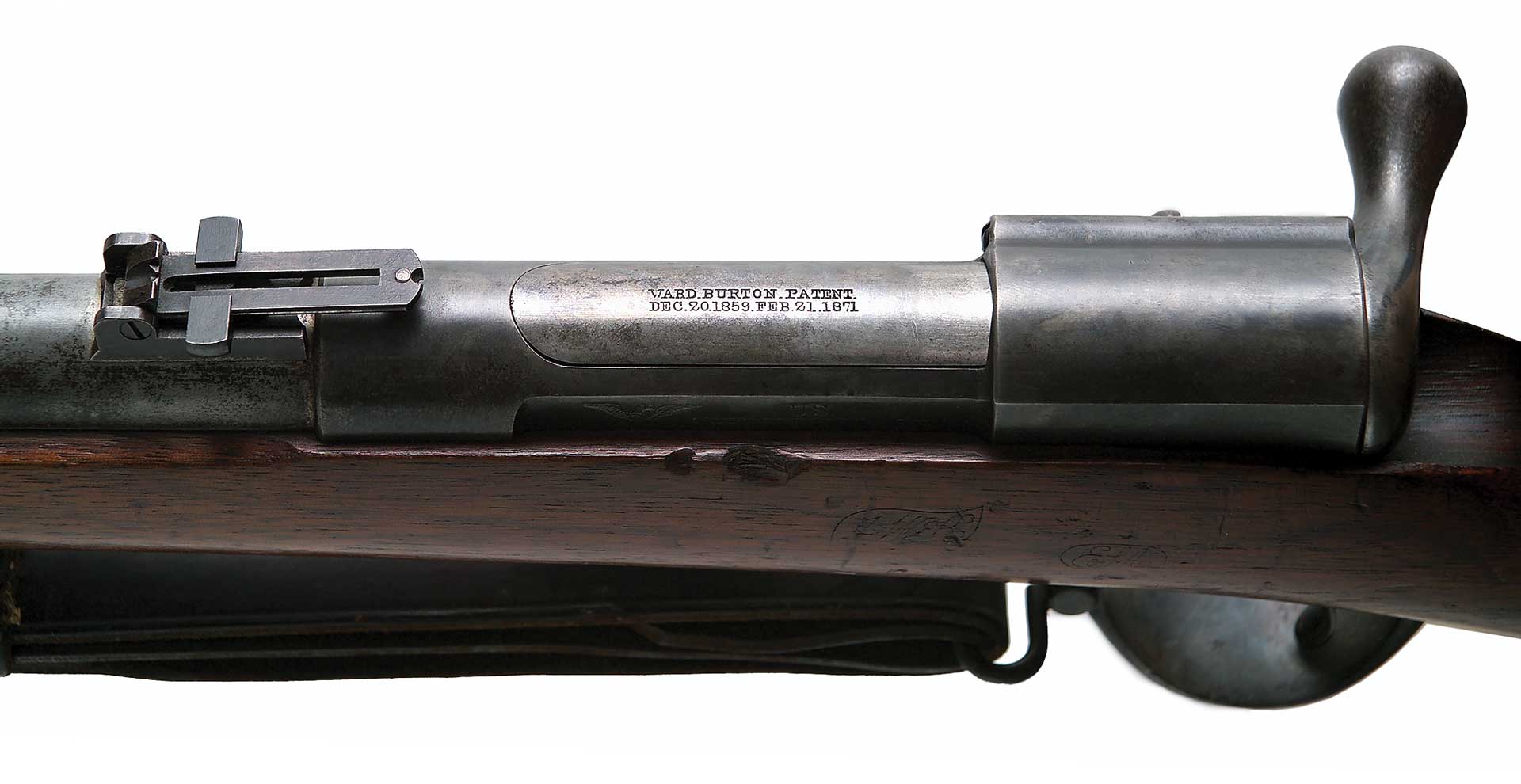 The Model of 1871 Ward-Burton rifles and carbines were issued to a number of U.S. Army units for field testing, along with the other .50-70 breechloading trial designs. The U.S. Army’s 13th Infantry was one of the units that tested Ward-Burton rifles. While made in very limited numbers, Ward-Burton carbines saw a surprising amount of use by several Army units, including the 1st, 3rd, 4th, 5th 6th, 7th and 9th U.S. Cavalry companies. Most of these cavalry units were also concurrently issued Model of 1870 Trapdoor Springfield, Model of 1870 Rolling Block and Model of 1870 Sharps trial carbines.

While nominally trial arms, some of the Ward-Burtons—especially the carbines—saw at least a modicum of combat use. Ward-Burton carbines are known to have seen service during the Yellowstone Expedition, and they were issued to cavalry units stationed in Nebraska, Texas, Colorado and Kansas. 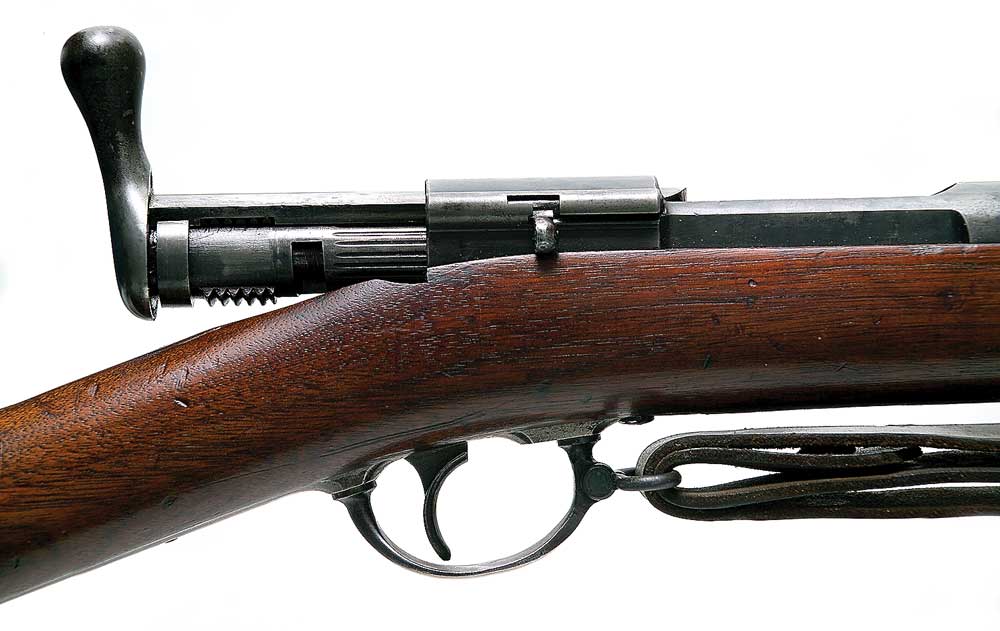 There were several reasons for the near universal dislike of the Ward-Burton. Undoubtedly, the unusual (for its day) bolt-action was distrusted by many of its users. Unlike the Trapdoor Springfield, Sharps and Rolling Blocks, all of which had large outside hammers that could be readily observed, it was difficult to ascertain whether the Ward-Burton’s action was cocked and/or loaded. A number of accidents occurred because troops unfamiliar with the design discharged guns they assumed were unloaded. Several design flaws contributed to the Ward-Burton’s problems, including a screw that could shear off during recoil. Improper heat treatment of the bolt also caused some failures, which led to further distrust.

As the results of the field trials were reviewed and evaluated, it became apparent that the Ward-Burton was not suitable for continued production or widespread issue, and it was dropped from further consideration. Ward and Burton developed a repeating, magazine-fed version, but the design didn’t even get into the trial stage due, in large measure, to the negative reputation of the Model of 1871 rifle and carbine.

The Model of 1870 Trapdoor Springfield was eventually selected as the best trial breechloader. A slightly modified version, the Model of 1873 chambered for the new .45-70 Gov’t cartridge, became the Army’s standardized shoulder arm. The .45-70 Trapdoor remained in production until shortly after adoption of the Krag in 1892.

Despite its shortcomings in the field trials and subsequent rejection by the Army, the Model of 1871 Ward-Burton rifle and carbine are popular with collectors today. A Ward-Burton rifle or carbine in excellent condition is among the most attractive U.S. martial arms of the Indian War period. When compared to its contemporaries, the Ward-Burton has a surprisingly modern appearance. Many saw hard use during the infantry and cavalry field trials, and most surviving specimens are well-worn. The Ward-Burton is significant as the first true bolt-action produced for the U.S. military. It is an example of an interesting—if ultimately unsuccessful—martial arm. Surviving examples, particularly carbines, are increasingly harder to find on the collector market today, especially in excellent condition.

While often overlooked alongside its better-known contemporaries, such as the Trapdoor Springfields, Rolling Blocks and Sharps, the Ward-Burton represents a significant milestone in the evolution of U.S. military arms. Whatever flaws it may have possessed, the Ward-Burton has the distinction of being the first U.S. military bolt-action rifle, and as such, is one of the more interesting, and historically significant, firearms of the Indian War era.

Who Would You Kill? The Moral Question Behind The Supreme Court’s Abortion & Gun Control Decisions