Merwin Hulbert revolvers had an unusual mechanism for opening, intended to allow selective ejection of empty cartridges. During the late 1870s and 1880s it competed with Smith & Wesson, Colt and Remington for the large revolver market. To open the revolver, a button on the bottom of the frame is pushed toward the rear, and the barrel and cylinder are rotated clockwise 90 degrees and then pulled forward together. 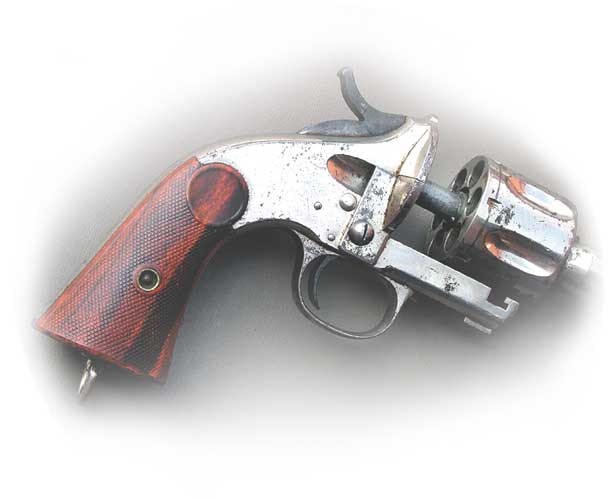 Marked both “Hopkins and Allen” and “Merwin Hulbert,” they were manufactured inside the Hopkins & Allen plant, but it is believed the production was kept separate, and the Merwins are generally considered to be of higher quality than the H&A’s. Some knowledgeable experts contend they were the finest-made revolver of the late 19th century. Offered in large, medium, and small frames, the large frames were chambered for .44-40, .44 Russian or proprietary .44 Merwin Hulbert cartridges.

This is an early First Model, with the open top & scoop flutes. It appears to retain about 90 percent of the original nickel finish. It appears as if there is some pitting, and that the release button is an incorrect replacement, both of which reduce the value. The nice orange mottled hard rubber stocks add to the value a bit.

This feature article, “I Have This Old Gun: Merwin Hulbert,” appeared originally in the September 2005 issue of American Rifleman. To subscribe to the magazine, visit the NRA membership page and select American Rifleman as your member magazine.