The Russian Empire began experimenting with automatic service rifles early in the 20th century, with its Fedorov Avtomat appearing in 1915, firing the 6.5×50 mm Japanese cartridge. Following the Russian Revolution, the decision was made to stick with the decades-old 7.62×54 mm R cartridge, prompting the who’s who of interwar Soviet small-arms designers to put their hands to developing a semi-automatic battle rifle chambered in that cartridge. 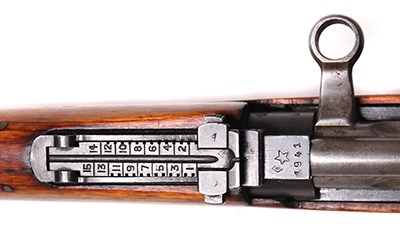 The design that would eventually come out on top was crafted by Fedor Tokarev and adopted as the SVT-38. The SVT used a short-stroke gas-piston system, and its bolt was locked by a tilting block. While the 10-round magazine was detachable, the rifle was designed to be loaded with two five-round Mosin-Nagant stripper clips. The rifle saw its first use in the Winter War with Finland, and under the brutal conditions of that conflict, several deficiencies of the design came to light.

The SVT-40 was a product-improved version of the SVT-38. Wartime variants of the SVT-40 included a carbine version with a 6″ shorter barrel and an automatic version known as the AVT-40, which proved to be unsuccessful.

Intended to become the nation’s frontline service rifle, the German invasion of the Soviet Union in 1941 meant that the bolt-action Mosin-Nagant would instead continue as the dominant Soviet combat rifle until the end of the war. Under wartime conditions, it was easier to manufacture firearms like the Mosin-Nagant and the PPSh-41 submachine gun, and to train recruits with them, rather than the SVT.

The SVT-40, however, did make an impact. It is not uncommon to see photographs of German soldiers on the Eastern Front with SVT-40s slung over their shoulders. The Germans learned from their experience on the business end of the SVT and adapted the rifle’s short-stroke gas-piston system to their own semi-automatic battle rifle designs, which resulted in the G43.

More than 1.5 million SVT-40s were manufactured between 1940 and 1945, making it second only to the M1 Garand as World War II’s most-prolifically produced semi-automatic service rifle. Following the war, it was quickly replaced in Soviet service by the SKS and AK-47, but SVT-40s did serve in limited numbers during the Korean and Vietnam conflicts.

Tokarev rifles were rare in the U.S. in the decade following World War II, with most examples limited to those captured by the Germans and, in turn, liberated and brought home by American G.I.s. In the late 1950s, Finland sought to rid itself of its stock of SVTs captured from the Soviets, and several thousand of the rifles were imported by Interarms. These Finnish-capture SVTs are identified by the “SA” Finnish acceptance stamp and their lack of import markings.

The rifle pictured is one of those Finnish-captured Interarms imports. It was manufactured at the Tula Arms Plant in 1941. Like most SVTs that found their way into Finnish service, it has been refurbished. Parts are mismatched, as the Finns didn’t have the capacity to manufacture replacement components and had to rebuild their SVTs with parts stripped from unserviceable rifles. This example is in NRA Good condition and is worth $2,200.

After the fall of the Soviet Union in the 1990s, tens of thousands of SVT-40s were imported into the U.S. Most have been arsenal-reconditioned with parts “force-matched” and numbered with an electro-pencil. These rifles are the most common on the American collector market.

German-marked SVT-40s bring a premium, followed by Finnish-capture examples and finally refurbished rifles imported in the ’90s. With numerous minor variants and changes made throughout its production cycle, the SVT-40 makes for a fertile field for the collector. It’s an iconic battle rifle that made its mark on the Eastern Front, and its features continue to influence firearm designs to this day.