I am often asked by hunters who are planning their first dangerous game hunt—whether it be in Alaska, Australia or Africa—which is the right dangerous game cartridge for them. While the answer to that question may be subjective, and could easily be tailored to both the shooter and the game animal being pursued, there are a few all-around choices which will suffice in a good number of dangerous-game situations. Considering that in a number of African countries the .375-inch bore diameter is the legal minimum, I will adhere to that rule for my choices. Each shooter’s recoil tolerance level is different, and some people appreciate flexibility over specific application, but rest assured that each of these choices will cleanly take any game animal on earth. So, without further ado, here are my top five dangerous game cartridges, in no particular order. 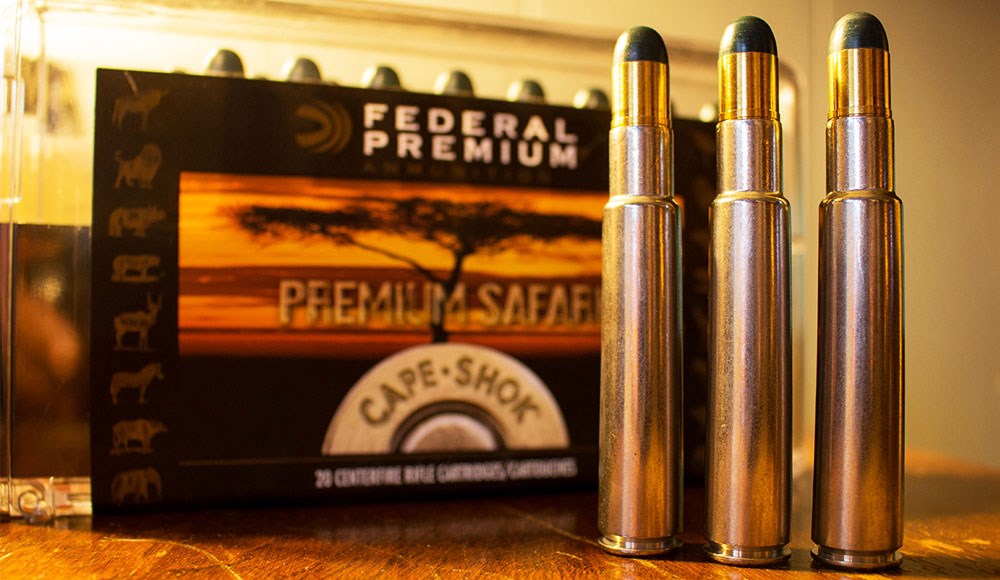 1. .416 Rigby
John Rigby & Co. chose and unknown and unproven bore diameter in 1911, when it released its .416 Rigby. Featuring an oversized case to combat the effects of tropical heat on Cordite—the propellant of the day—and a sharp 45-degree shoulder, the .416 Rigby would become a highly regarded choice among the African PHs, in spite of selling less than 200 rifles in the heyday of African safaris. The writings of John ‘Pondoro’ Taylor and Robert Ruark helped to cement the reputation of the four-sixteen, and it somehow survived the demise of Kynoch—the major supplier of British sporting ammunition—and was revived in the late 1980s when Ruger chambered its RSM rifle and Federal offered factory loaded ammunition. Driving a 400-grain bullet to 2400 fps for over 5,000 ft.-lbs. of energy, Rigby’s cartridge offers what may be the best penetration available; and that is paramount when pursuing the thick-skinned species like hippo, elephant and buffalo. Its recoil is manageable, and while there are modern updates like the .416 Remington Magnum and .416 Ruger, the Rigby still rules the roost 110 years later. 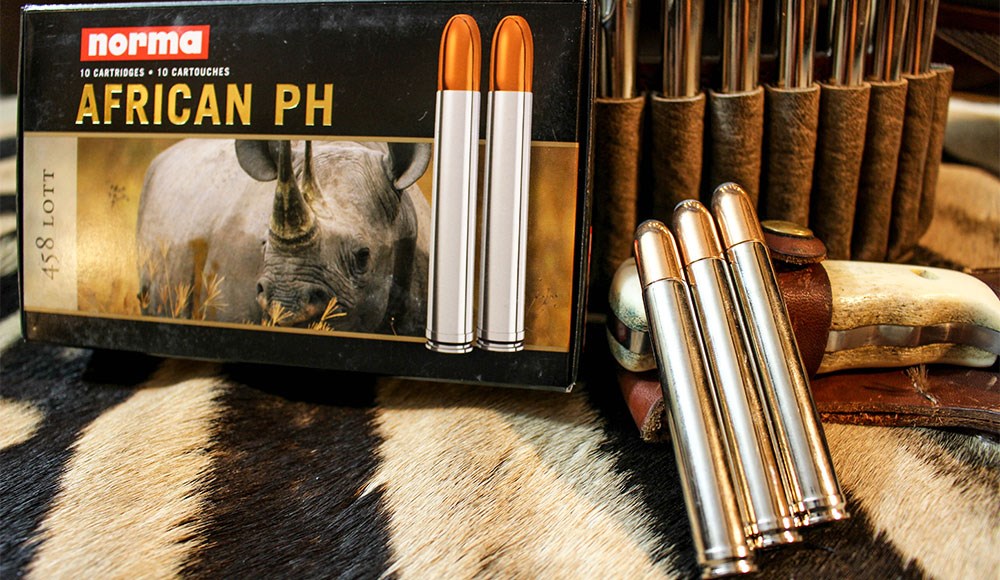 2. .458 Lott
Among dangerous game cartridges, John Rigby’s .450 Nitro Express set the benchmark at the end of the 19th century, with a ballistic formula that has relied upon since its release. The .450 NE used a 480-grain bullet of .458-inch-diameter at a muzzle velocity of 2150 fps for just under 5,000 ft.-lbs. of muzzle energy; the American equivalent was the .458 Winchester Magnum, which—on paper—pushed a 510-grain bullet to 2150 fps, but didn’t quite get there at first. A short case and compressed powder loads made for some issues early on, and hunters sought a means to rectify the problem. Jack Lott saw a quick fix: instead of the 2.500-inch belted case Winchester used, he’d employ the full-length 2.85-inch case—same as the .375 H&H upon which it was based—to give room for additional powder capacity. Though the .458 Win. Mag. is a much better cartridge today than it was upon its release, I still prefer the .458 Lott design, as it will give a light bump in muzzle velocity without crushing the shoulder, and for the handloader it will be a piece of cake to achieve 2150 or 2200 fps with the big 500-grain slugs. If you’re a fan of the .458-inch-diameter cartridges, the .458 Lott is a great choice. 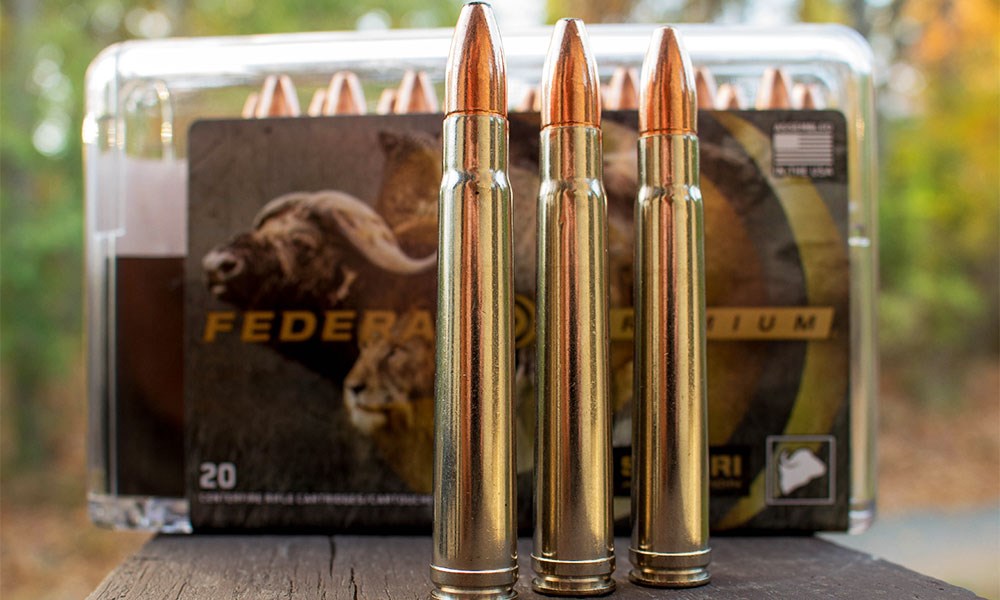 3. .375 H&H Magnum
Make no bones about it, the ‘three-seven-five’ remains the most flexible and popular of the early crop of belted cartridges. It doesn’t impress with energy figures—generating just over 4,200 ft.-lbs. of muzzle energy—but it surely allows the shooter to place their shots precisely, and a premium 300-grain bullet of a design suitable for the game at hand will seal the deal. It is easy enough on the shoulder, and with lighter bullets, can be as flat shooting as the .30-06 Springfield. Some have criticized the .375 for not being a ‘stopping cartridge,’ but if you look at the Norma African PH load, which features the 350-grain pair of Woodleigh Weldcore softpoint and Woodleigh FMJ solid at 2300 fps, it may take on a different light. I’ve had a couple African PHs rely on the .375 for safari work, and I have never felt undergunned while carrying one. Flexible, reliable, available and dependable are all words I’d use to describe the .375 H&H. And while some would argue its application on elephant, it is certainly at home on grizzly bears, lions, leopards and Cape buffalo. If you want to expand your rifle collection, a .375 H&H Magnum is pretty much welcome in any camp, anywhere. 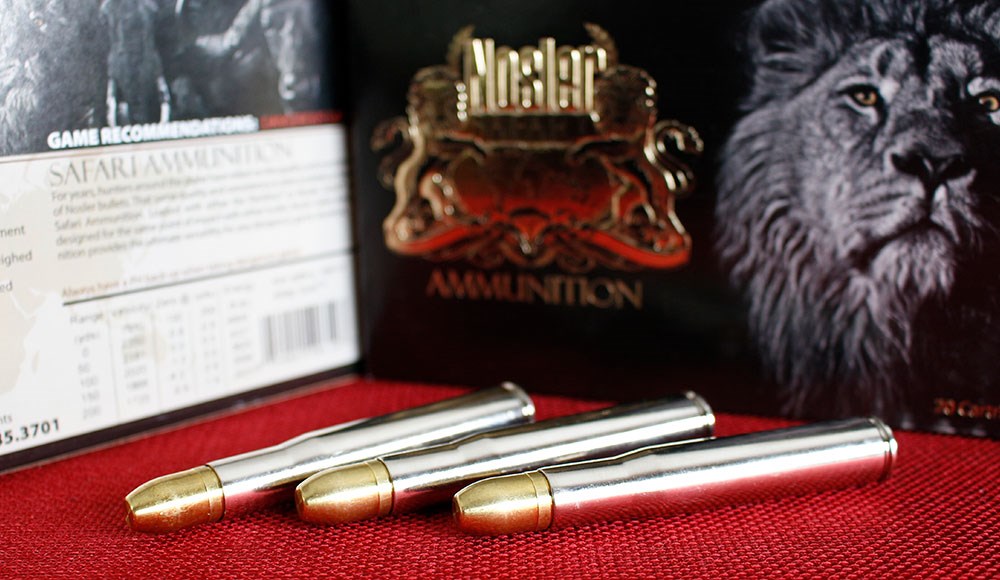 4. .404 Jeffery
Maybe the most obscure cartridge on the list, this one has a special place in my collection, as it has proved to be a wonderful combination of horsepower and manageability. With a sleek 8-degree shoulder on a rimless case, the .404 Jeffery feeds like grease, and the 400-grain bullets of .423-inch diameter are every bit as effective as the .416s. The classic load pushes that bullet to a muzzle velocity of 2150 fps, though all the modern loads drive that same projectile to 2350 fps. You can use the heavy-for-caliber Woodleigh bullets at 450 grains to beef up performance, but my particular favorite bullet is Woodleigh’s 400-grain Hydrostatically Stabilized Solid at a muzzle velocity of 2280 fps; that combination has taken elephant and Cape buffalo very cleanly, and with the lighter bullets weighing 325 and 350 grains, it works wonderfully on African plains game and North American game as well. As a bonus, it was the .404 Jeffery which took the Chadwick ram in British Columbia in 1936, considered by many to be the greatest hunting trophy of all time. I would happily use my Heym Express by Martini in .404 Jeffery for the rest of my hunting days. 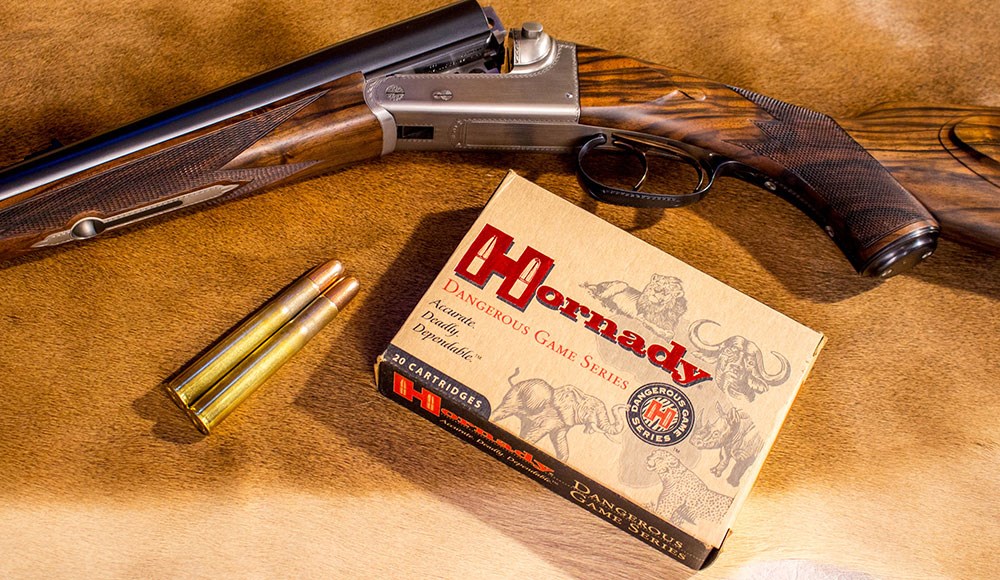 5. .470 Nitro Express
Among the rimmed choices suitable for double rifles, I like the .470 Nitro Express best. Mimicking the ballistic formula of the .450 Nitro Express, which was part of the .45-caliber ammunition ban across the British Empire in the early part of the 20th century, the .470 NE uses a 500-grain bullet of 0.474-inch diameter at a muzzle velocity of 2150 fps, generating over 5,100 ft.-lbs. of energy. It is based on the .500 NE case, necked down, and is one of the most readily available of the Nitro Express cartridges. I chose the .470 for my own double rifle—a Heym Model 89B stocked to my dimensions—and have been completely happy using that on a pair of African safaris for Cape buffalo and a jaunt in Australia for water buffalo. While assuredly better suited to elephant bulls at infield distances than a grizzly bear across the Tioga, the .470 is a great cartridge when horsepower is need on thick-skinned, dangerous game. It is the most readily available of the classic Nitro Express cartridges, and there are more .470 NE rifles being produced of late than any of the other rimmed NE cartridges.