If you didn’t know better, you might look at the Trijicon RMRcc and think, man, there’s something a little different about that RMR. You would, of course, be right—it’s the same length as a standard RMR, but .06-inch thinner and .03-inch shorter. Now, I don’t know about you, but I’m not sure I could tell the difference between the two from just a glance. My powers of estimation get real fuzzy down in the sub-tenth-of-an-inch range.

What this slight decrease in size does, however, is make the RMRcc ideal for smaller guns—you know, like the micro-9 mm double stacks that have pretty much taken over the concealed-carry world in the past two or three years. It also makes the RMRcc a darn good choice for a single-stack 1911, too, and there are plenty of those sprouting milled slides for red-dot sights these days.

It is, quite frankly, a brilliant move by Trijicon. The company has been making the RMR for more than a decade, starting in the late 2000s with the first iteration; Trijicon launched the updated Type 2 in the latter part of the 20-teens and the RMRcc in late 2020. If you missed it, well, there was an awful lot going throughout 2020, so we don’t blame you. Suffice to say, the RMRcc looks like a standard RMR that got tossed in the dryer on “high” setting for just a little bit too long. 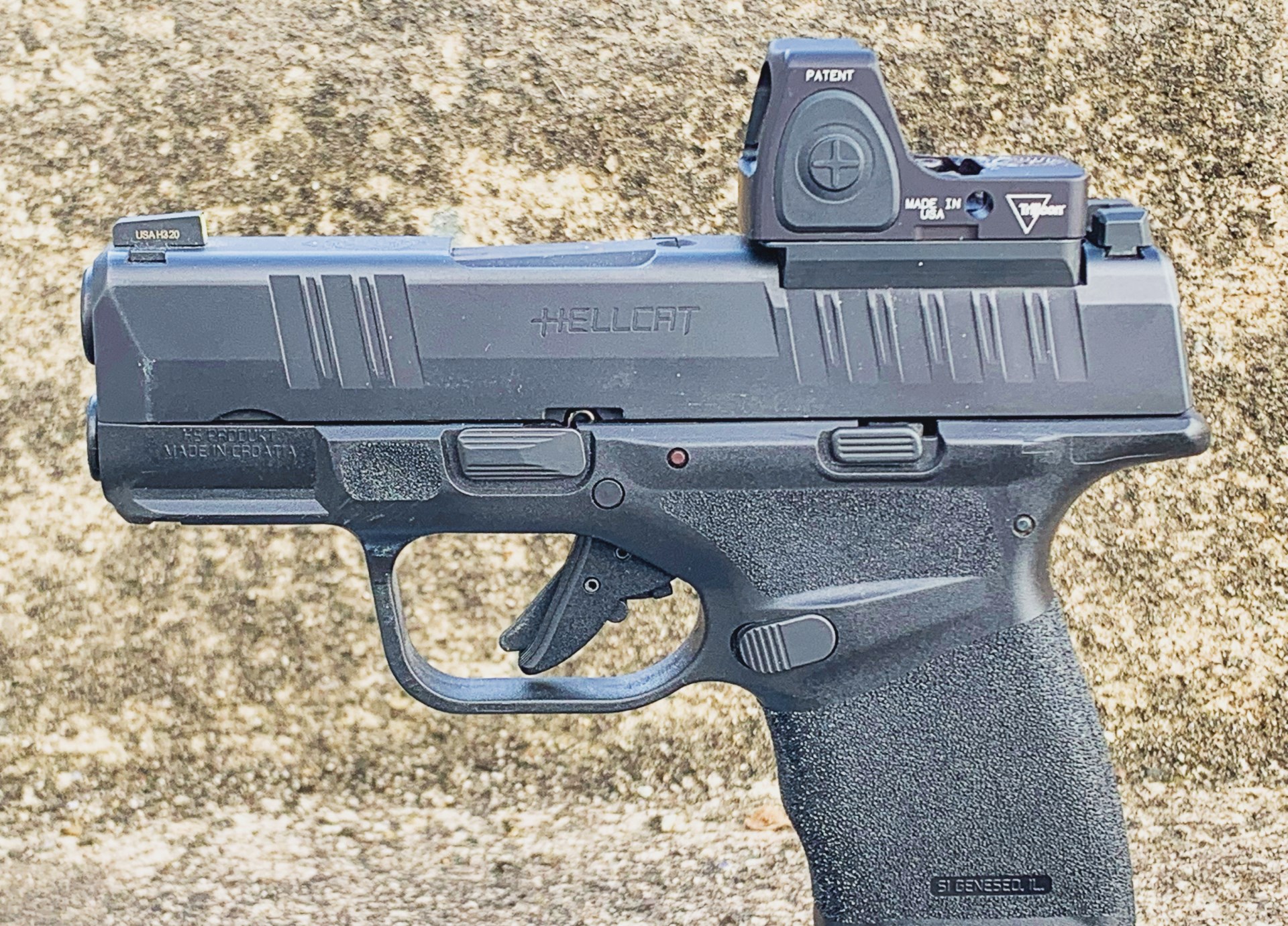 The RMRcc still has all the ruggedness of its bigger brother. It’s water-resistant (I’m sorry, nothing is waterproof) to 20 meters, has the same 7075 aluminum housing built to withstand impact, its lens has the same multi-coating treatment as the RMR and it has the same four-year battery life (on setting 4 of 8) as the larger RMR. Controls are, again, like the bigger RMR, limited to a “+” button to increase brightness on the left side, a “-“ button to decrease brightness on the right and elevation and windage dials on the top and right, respectively.

Eight brightness settings, including two night-vision-compatible modes and a “super bright” option, are available, and the user can choose whether to let the RMRcc adjust brightness automatically or perform the task manually. Zeroing adjustments are made in 3-MOA clicks, and both dials are clearly marked as to the direction to turn (counter-clockwise to move the dot or right, etc.), even for, well, more seasoned eyes.

There is a lot to be said for familiarity. If you run an RMR on a full-size pistol and want to equip a smaller gun similarly, it’s a smart choice. Our brains are wired to look for the familiar. There’s a reason that, for example, automotive design is a multi-billion-dollar industry that, quite frankly, turns out a lot of cars that look the same. If, for example, one was to carry a Glock G17 during the colder months (when cover garments allow larger handguns), and wanted to transition to a G43X in the warmer months, the addition of the RMRcc to the G43X would keep a strikingly similar profile, just a little smaller.

There is one drawback to the RMRcc, though, and I don’t mean the price tag. Sure, it has an MSRP of $699, which is rather a bit more than what other, micro-red-dot sights are fetching these days; however, it’s also the same price as the standard RMR. That’s because, well, it is an RMR. If you’ve been thinking of getting a Trijicon for your red-dot equipped carry pistol, there’s literally no difference in price between the RMRcc and the RMR Type 2. The drawback I’m referencing here is the footprint: it’s … unique. 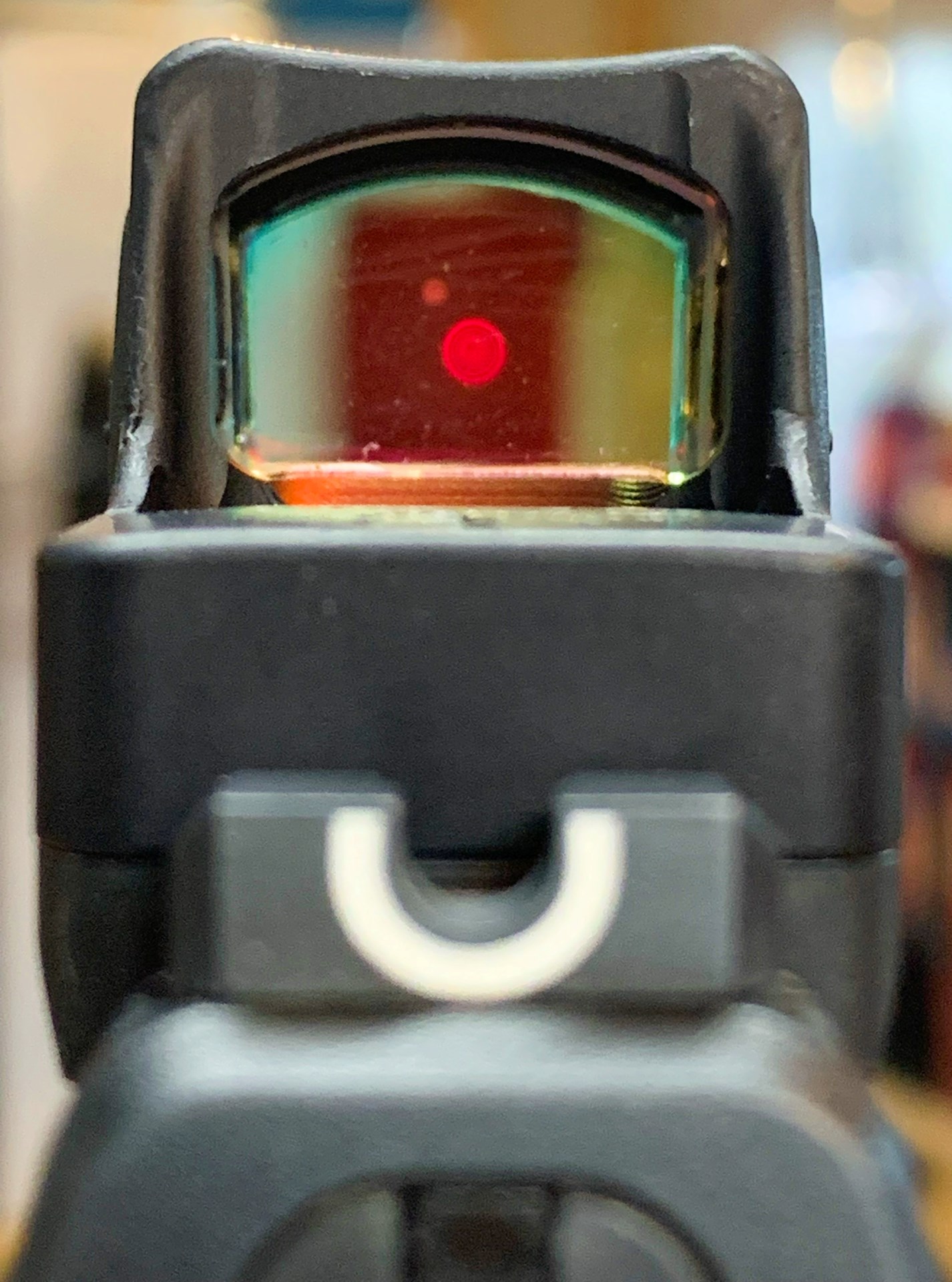 Dozens if not hundreds of pistols and aftermarket slides exist cut for the Trijicon RMR—and other red-dot sights have been produced that also work on that footprint. The RMRcc, though, is completely different—because of the complex engineering needed to shrink the RMR down to RMRcc size, it necessitated a different footprint than its big brother, or even the industry-standard RMSc footprint in use on just about every micro-9 mm double-stack pistol out there. This is a rather minor setback, and Trijicon offers a number of rear-sight dovetail mounts and adaptor plates for common optics-ready pistols and systems.

When asked why the RMRcc didn’t use either the RMR or RMSc footprints, Trijicon responded, “The RMRcc has a unique footprint in order to pack all the RMR features in a compact package while maintaining the legendary durability for which Trijicon is best known.”

As for operation, forgive the drum-banging, but it’s a Trijicon RMR. It’s going to work, it’s going to work well and it’s going to work as long as you own it. When Scott Jedlinkski of Modern Samurai Project visited NRA HQ a few years back to give an impromptu red-dot class, he specifically mentioned the RMR as one of the most robust platforms he’d seen in classes. That same toughness carries over to the RMRcc, just in a (slightly) smaller package. If you’ve got a single-stack 1911, micro-9 mm double-stack or simply want a slightly thinner optic, the RMRcc is a standout choice.

I’ve had the opportunity to shoot several pistols equipped with the RMRcc, and if I’m honest, it’s boring. The sight, like its bigger brothers, just plain works. I’ve had it on my Springfield Armory Hellcat OSP, a Smith & Wesson Shield Plus and a different RMRcc on a Staccato C2. All worked perfectly, which really shouldn’t surprise anyone. While, no, I haven’t had the opportunity to put thousands of rounds through a pistol equipped with an RMRcc, the few hundred I’ve shot give me no reason to suspect it will function any differently from the two RMRs I have shot multiple thousands of rounds through.

In a review in the print version of Shooting Illustrated, we have a section for “On Target” and “Off Target.” The “On Target” part references things we like about the item being reviewed; and the “Off Target” part is for things we think could be improved. The “On Target” for the RMRcc is simple: It’s an RMR. It has the same engineering and DNA as the red-dot sight that’s been around forever and in use with people that run gear hard. It’s going to work, regardless of the conditions.

The “Off Target,” well, I think I telegraphed that a few paragraphs back. It’s the footprint, plain and simple. Had the RMRcc come out using the standard JPoint/RMSc footprint, I think it would have been far more useful. While there is an adaptor plate (that, very thoughtfully, comes with the appropriate screws for many platforms), it raises the RMRcc up so high that even suppressor-height sights are of little use. Now, granted, it is an RMR and it’s going to work, but there are folks that insist on redundancy. If the RMRcc Type2 were to incorporate an RMSc footprint, I’d call it the perfect sight for your micro-9 mm double-stack pistol.