June 29, 2022 Guns In The News
Home»Commentary»Understanding the Slide Stop
Commentary

If you’ve been shooting semi-automatic pistols for more than a minute, you’ve inevitably locked the slide to an open chamber position. You have shot to a condition where you have expended all remaining rounds in your magazine and have observed your slide locked to the rearward position. Whether you manually moved the slide into the locked position for an intended purpose, or it was done for you by the cycling of the semi-auto pistol slide, what is the real story behind expediently disengaging a pistol slide stop?

Before jumping right into the technical details, it’s a good idea to first address nomenclature. A slide stop, also referred to as a ‘slide lock’ and in certain cases (some would claim erroneously) a ‘slide release,’ is a functional spring-loaded lever found on most semi-automatic pistols that engages by moving it into a fitted notch located in the slide on the same side as the slide lock.

It is designed to firmly position (lock) a reciprocating pistol slide to the rear of the frame which can be accomplished manually by the shooter physically moving it into place by hand, or by the cycling of the semi-auto pistol slide after the last round of a magazine is fired – colloquially referred to as “shooting to slide lock.”

Technically speaking, upon expending the last and final round of any remaining ammunition in your magazine, the follower (moving magazine part located between your cartridges and magazine spring), depressing the slide stop spring (attached to the frame), presses up against the slide stop and causes it to engage in the slide stop notch cut into the slide which in turn causes the slide to be pinned in the rearward position of the pistol frame presenting an empty chamber.

When the shooter happens to notice slide lock either visually or by feel, it can be considered a positive indicator that there is no more ammo remaining in your handgun prompting the shooter to reload and get the gun back up and running.

Manually speaking the slide stop can be used to either clear a complex operational malfunction, for firearm maintenance or to lock the chamber in the open position allowing for visual and/ /or digital inspection to ensure that the pistol is in fact empty.

In the context of shooting to slide lock, it’s important to get your gun back into action as quickly as possible. The logical conclusion to observing that you have shot to slide lock is to seat another magazine into the magazine well and disengage the slide lock as to place the gun back into full battery.

Inserting and properly seating the magazine is fairly straightforward with few variations, however, disengaging the slide stop is a completely different matter and can be accomplished using varied methods worth discussing in detail.

If you find yourself in mid-motion of firing your gun, and it is the case that you run out of bullets, indicated by shooting to slide lock, then it logically follows that you need to replace the now-empty magazine with a fresh magazine filled, preferably to maximum capacity, with cartridges thereby replenishing your ammunition supply.

The final step to recovering from shooting to slide lock is to disengage the slide lock placing the gun back into battery which can be accomplished expediently and consistently with a handful of varied techniques. 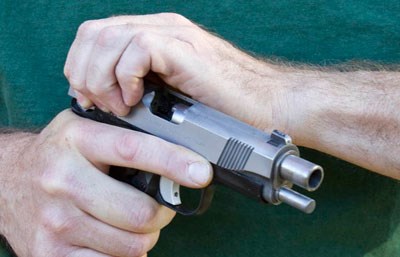 Although not the fastest method available to place the slide back into battery, it is favored predominantly by the traditional defensive shooting community. Reason being that applying all four fingers you can work the slide even if you get one of them and/ or your thumb injured in a gunfight. It’s consistent with keeping 6 and 12 alignment in the workbox area therefore not needing to turn the pistol along its bore line axis at any time, conducive to clearing most common operational malfunctions and provides the shooter with yet another option to do a press check to ensure that there is in fact a round in battery if that is part of their standard operational procedure. 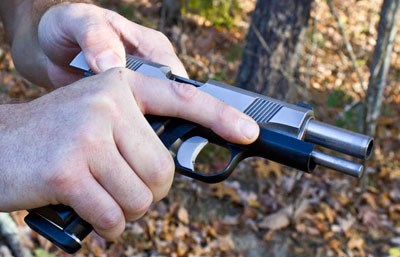 The next most common is the sling shot method which is about the same response time as the claw. Although not really faster or slower it does require that the pistol be turned on its bore line axis that the support hand palm faces the strong hand to initiate the “pinch” or slingshot-like grasp (hence its namesake) utilizing the forefinger and the thumb.

Utilizing the slide lock itself to place the firearm back in battery offers the quickest response time. However, as no slick move comes without a price tag, one of the downsides is that if you are using your strongside thumb, based on the size of your hand you may need to reposition the gun in your hand moving the muzzle out of alignment which negates any time you may have saved. 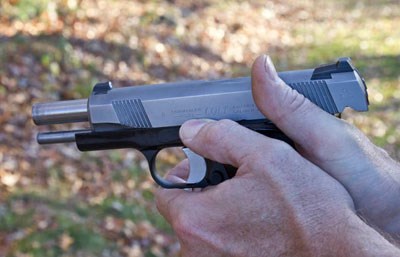 Another potential hazard is of your hands may be cold, oily, sweaty, bloody, etc., which may cause slippage off the slide lock, an inconsistency that could cost valuable time. To bypass this potential hazard several gun parts manufacturers offer third-party oversized slide stops specifically designed with greater contact surface area for a more positive thumb placement. The downside to the oversized single-side or ambi third party slide locks is that if you have a large hand or big, long thumbs, this oversized landing pad can be inadvertently depressed during normal operation and cause a failure to lock back with an empty magazine.

Last but certainly not least is to utilize your support side thumb. Certain agencies and departments that also issue semi-auto AR platform carbines to their employees, train their shooters to hit the bolt catch (locking the bolt carrier assembly to the rear) sending the bolt forward and a round in battery using their support hand thumb. Those same officers are offered the option to employ the same support-side thumb technique to their pistols, therefore maintaining uniform operational consistency between issued shooting platforms.

Given these options and others not listed in the limited space here such as fighting through an injury (employing strong-hand-only and support-hand-only reloads on a belt, holster, boot heel, knees etc.,) the bottom line in disengaging the slide lock is to find that perfect balance between speed and consistency in exchange for an acceptable price tag.