January 15, 2022 Guns In The News
Home»US News»Why Do People Think That Gun Rights Have Expired?
US News

Why Do People Think That Gun Rights Have Expired?

Get updates directly to your inbox from GunsInTheNews.com!
NRAmedia – Have you seen this on Facebook or Twitter lately? “The Founding Fathers couldn’t have imagined a world with semi-automatic weapons, therefore the Second Amendment is outdated.” If that’s true, I doubt the Founders could’ve envisioned social media and smartphones either, so does that mean the First Amendment doesn’t apply to online postings (or television, or radio …)?

Or maybe you’ve heard this one: The Second Amendment isn’t about an individual right, it’s all about a militia, which is now the National Guard. I’m kind of amazed that this is brought up as some kind of actual debate, when the meaning of the Second Amendment was crystal-clear to those who enshrined it in our Bill of Rights.

Take a look at Federalist 46, for instance, authored by James Madison. Keep in mind, the Federalist Papers were originally opinion pieces, published at a rate of one or two a week in order to influence the debate over ratification of the Constitution. Madison was writing this to convince a living audience to approve the Constitution and create a strong federal system. InFederalist 46, the “Father of the Constitution” is laying out the case that, even with a strong federal government, Americans shouldn’t worry about tyranny developing. Why? As he explained, even under the most powerful federal government, the people would retain state and even local governments that would be freely elected. Additionally, Madison explicitly acknowledged, the armed populace of a free society would far outnumber the size of the federal army.

“The highest number to which, according to the best computation, a standing army can be carried in any country, does not exceed one hundredth part of the whole number of souls; or one twenty-fifth part of the number able to bear arms. This proportion would not yield, in the United States, an army of more than twenty-five or thirty thousand men. To these would be opposed a militia amounting to near half a million of citizens with arms in their hands, officered by men chosen from among themselves, fighting for their common liberties, and united and conducted by governments possessing their affections and confidence. It may well be doubted, whether a militia thus circumstanced could ever be conquered by such a proportion of regular troops.”

So, in a nation of 2.5 million people, Madison thought it reasonable that around 500,000 or so would be armed and ready to fight “for their common liberties,” united and conducted by governments of their own choosing if necessary. In a nation of more than 300 million like we have today, Madison would be heartened to know that the estimated number of gun owners in this country is between 90 million and 100 million. The “citizens with arms” that Madison referred to owned firearms for many reasons, including hunting and self-defense, but those arms could be counted on to defend the nation if necessary. Madison explicitly acknowledged the role that armed citizens played in fighting a tyrannical regime if one were ever established, but even more important was the role that those armed citizens played in ensuring that tyranny was never attempted in the first place.

That militia, comprised of the body of the people bearing arms, was only part of the ultimate safety net against tyranny, according to Madison. Equally important in his mind was the fact that the federal government wasn’t the only government in the new United States. The elected local, county and state governments provided checks and balances to the federal government, just as within the federal government the co-equal executive, legislative and judicial branches provided similar counterweights against the abuse of authority. If European countries possessed the same one-two defensive punch of an armed citizenry and freely elected local governments, Madison said, “the throne of every tyranny in Europe would be speedily overturned in spite of the legions which surround it.”In a nation of more than 300 million like we have today, (James) Madison would be heartened to know that the estimated number of gun owners in this country is between 90 million and 100 million.

Madison’s arguments in favor of ratification of the Constitution (alongside his fellow Federalist paper creators Alexander Hamilton and John Jay) won the day, but not before his fellow Americans demanded additional guarantees of their individual rights. As the Preamble of the Bill of Rightsexplains, “The Conventions of a number of the States having at the time of their adopting the Constitution, expressed a desire, in order to prevent misconstruction or abuse of its powers, that further declaratory and restrictive clauses should be added: And as extending the ground of public confidence in the Government, will best insure the beneficent ends of its institution.”

In other words, We the People wanted our elected officials to understand that there were certain portions of our life that were off limits to their meddling, and if they wanted us to go along with the Constitution, we thought it best that we make it crystal clear what rights we possessed that they could not take away. And because, as Madison made clear, tyranny is much harder to establish when citizens with arms are present, the federal government isn’t allowed to infringe on the rights of those citizens to bear arms. Again, this doesn’t negate the firearm’s importance as a survival tool for putting food on the table and protecting self and family, but it acknowledges the importance of the citizen at arms in American thought and tradition. Frankly, it wouldn’t have made any sense for Madison to talk about the right to bear arms for defense of self and others, or for hunting, as that was self-evident and there was literally no one advocating otherwise at that time. Instead, Madison, one of the proponents of the Constitution, was trying to convince Americans to vote in favor of ratification because, in part, those in charge recognized that ultimately the federal government served the people, and not the other way around. The people were, and are, the ultimate sovereign body of the nation.

More than 200 years later, it’s the NRA member who best embodies those qualities that Madison said would preserve our liberties. They are the citizens in arms, but they are also involved politically, helping to elect representatives at all levels who will preserve, secure and strengthen the freedoms that we possess in this country. They know the importance of elections big and small, and they are part of a grassroots army of dedicated volunteers across the country doing their part to defend our right to keep and bear arms. The Founders were well aware of what they meant with the Second Amendment, and there’s no doubt they viewed its importance as a fundamental safeguard for the security of a free state, and a free people.

Actually, Congress Did Take Action; They Said No

Why Do People Think That Gun Rights Have Expired? 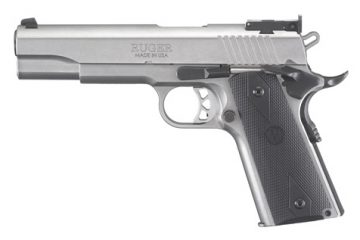