A guy can dream, right? We’ve all had this fantasy: Someone hands us the most expensive gun we have ever been allowed to touch, along with a case of ammo, and says, “Have fun!” What gun would that be in your world? While we all might think of some historical guns that we would love to shoot, here are five currently produced pistols and one historic sidearm that could be yours if you win the lottery. Here they are in price order. Get out your wallet! 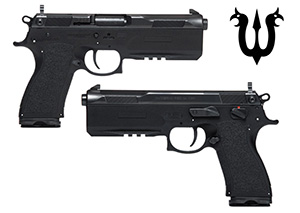 Sometimes it’s hard to justify spending a ton of money on a gun that only shoots one caliber. But what if you could buy one gun that shoots multiple calibers with a simple barrel switch? Would that be worth a few hundred extra? Say hello to the FK BRNO PSD Multi-Caliber Pistol. Originally chambered in 7.5mm, the PSD comes with optional 9mm and 10mm/.40 S&W barrels that swap out with an easy field strip. Factory sights are a peep sight in back and a proprietary red diamond on the front. However, if you’re not a fan of this setup, the slide is optic cut and accepts most pistol red dots. MSRP for the base model is a bargain compared to the others on this list at $1,750. 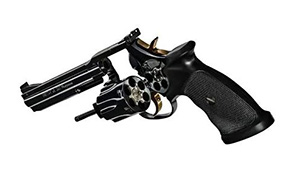 The Manurhin MR73 Sport six-shooter was originally designed for the French Gendarmerie and special units of the French police and military. The all-black MR73 outside contrasts with the gold-colored trigger and hammer assembly for a distinctly polished look not found on many other revolvers. The 5.25-inch barrel meets with a cylinder chambered in the popular .38/.357 Magnum setup fired by a double-action mechanism. Checkered grips on the handle flare to a wide skirt at the bottom for added assurance that your hand won’t ride off when fired. Like the others on this list, these revolvers are limited edition and handmade. If you can find one, it can be yours for $3,600. 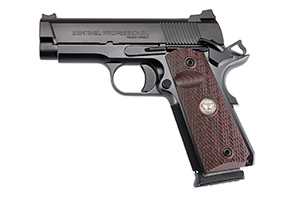 You kinda saw this coming, didn’t you? What’s a pricy gun list without at least one entry from Wilson Combat? Based on the 1911 Commander concept – think shorter barrel and longer grip – the Sentinel continues the WC tradition of smooth-as-silk 1911 operation. The fluted match-grade stainless 3.6-inch barrel flares at the flush fit muzzle and is chambered in your choice of 9mm or .38 Super. The grip is adorned with black cherry wood, a right-handed thumb groove, and a pewter WC medallion. The slide is forged from carbon steel. Base price for this beauty in 9mm starts at $4,085, but if you want a pricier sidearm, they’re more than happy to add some nice custom features for a bit more. 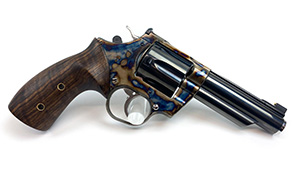 A throwback piece to the Old West but with modern touches, Korth and Nighthawk teamed up to create the Korth Heritage Edition .357 Magnum in both 4- and 6-inch-barrel versions featuring cold-forged barrels top off with an 18k gold sight bead. The grips are carved from Turkish Walnut and feature some of the best ergonomics ever found on a wood gripped revolver. Additionally, this classic six-shooter has an ultra-polished chassis made from billeted steel and smoothly goes bang via a roller trigger sister in single/double action. Unfortunately, these masterpieces are hard to get due to a very limited run, but if you find one, the MSRP is a mere $8,999. 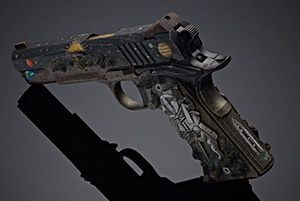 This one might not make it to the range, even in the aforementioned fantasy, because, while it is a fully functioning gun, it is likely better suited for hanging over your fireplace or in the Louvre. The Cabot Moonshot 1911 is so out-of-this-world that it features actual moon dust from lunar meteorites encrusted on the gun. As you likely already assumed, it is chambered in the traditional .45 ACP, but there is where the similarities end. The grip pays tribute to the Apollo moon landings with handcrafted artwork cut out of steel plate and welded to the side panels. Cabot’s unique take on “bluing” showcases an abstract star field and solar system motif covering the entire gun. How much will this super rare sidearm set up back? Better call your investment broker to see if you have a cool $250,000 lying around. 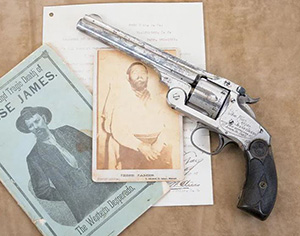 If you’re into collecting famous (or infamous) firearms, pull out your pocketbook or cash in your 401k to add this to your personal museum. Legend has it that the outlaw Jesse James was gunned down one day by fellow gang member Robert Ford as he was hanging a picture of the fireplace in his home in St. Joseph, Missouri, on April 3, 1882. The .44 caliber Smith & Wesson revolver Ford supposedly used was sold at auction in California in 2006 for just over $350,000. Ironically, Jesse James and his gang stole around $200,000 from banks and train robberies in his lifetime. Today, the gun that killed him is worth more than he ever stole.

Mockingbird Media Manipulation: No, There Haven't Been 27 Mass School Shootings This Year