December 6, 2022 Guns In The News
Home»Commentary»Choosing The Right Suppressor To Buy
Commentary

Choosing The Right Suppressor To Buy

Maybe you’ve read through our article on Five Reasons You Need A Suppressor and have decided that quieter shooting is in your future. While suppressors are highly regulated by the 1934 National Firearms Act, the process to purchase a suppressor is not as impossible as it might seem. The first step in owning a suppressor is deciding which one to buy. Here are a few points to consider as you make that decision.

One: What Type of Firearm Will You Use Your Suppressor On? 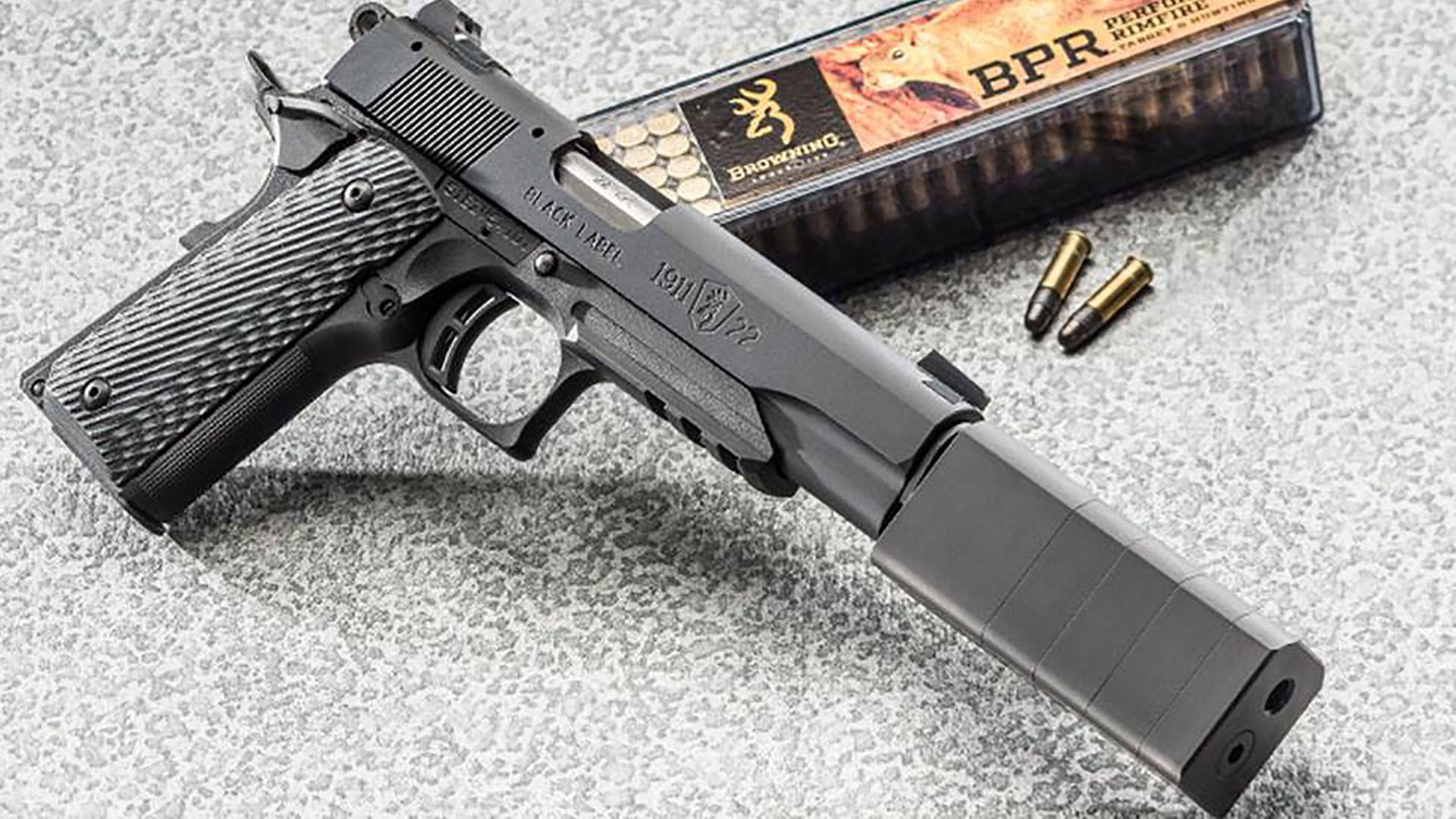 The first question to ask yourself when shopping for a suppressor is what type of firearm you are planning to use it on. While a certain suppressor can work on several firearms, no one suppressor works on every firearm. The design of a suppressor is tailored to the volume of gas it is intended to handle. For example, while a .22 LR bullet is nominally the same size as that of a .223 Rem., these two cartridges produce vastly different volumes of gas. Expect your suppressor to get larger and more expensive as you move up the power scale in the cartridge it is designed to handle.

Suppressors can also be rated for fully-automatic firearms. Even if you don’t own one of these types of arms, a full-auto rated suppressor might be necessary if you expect to do high volumes of rapid fire with a semi-automatic firearm.

Suppressors work best in caliber-specific applications, but there is some wiggle room. For example, you can typically fire a 9 mm Luger through a suppressor designed for the .45 ACP, or a .223 Rem. through a .308 Win.-rated suppressor, though the larger opening in the suppressor means that it won’t give you as much sound reduction as the caliber of bullet it was designed for. It’s not just bullet diameter.

Though a 7 mm Rem. Mag. cartridge has a smaller diameter bullet, it produces a larger volume of gas and cannot be used through a .45-cal pistol suppressor. So if you want one suppressor to use on several firearms that you own, make sure you pick a model that is compatible with each one. Modular suppressors add to this flexibility by having removable end caps that can be tailored to specific calibers and mounting systems, and their overall length can be adjusted to the type of firearm that you are using them on. 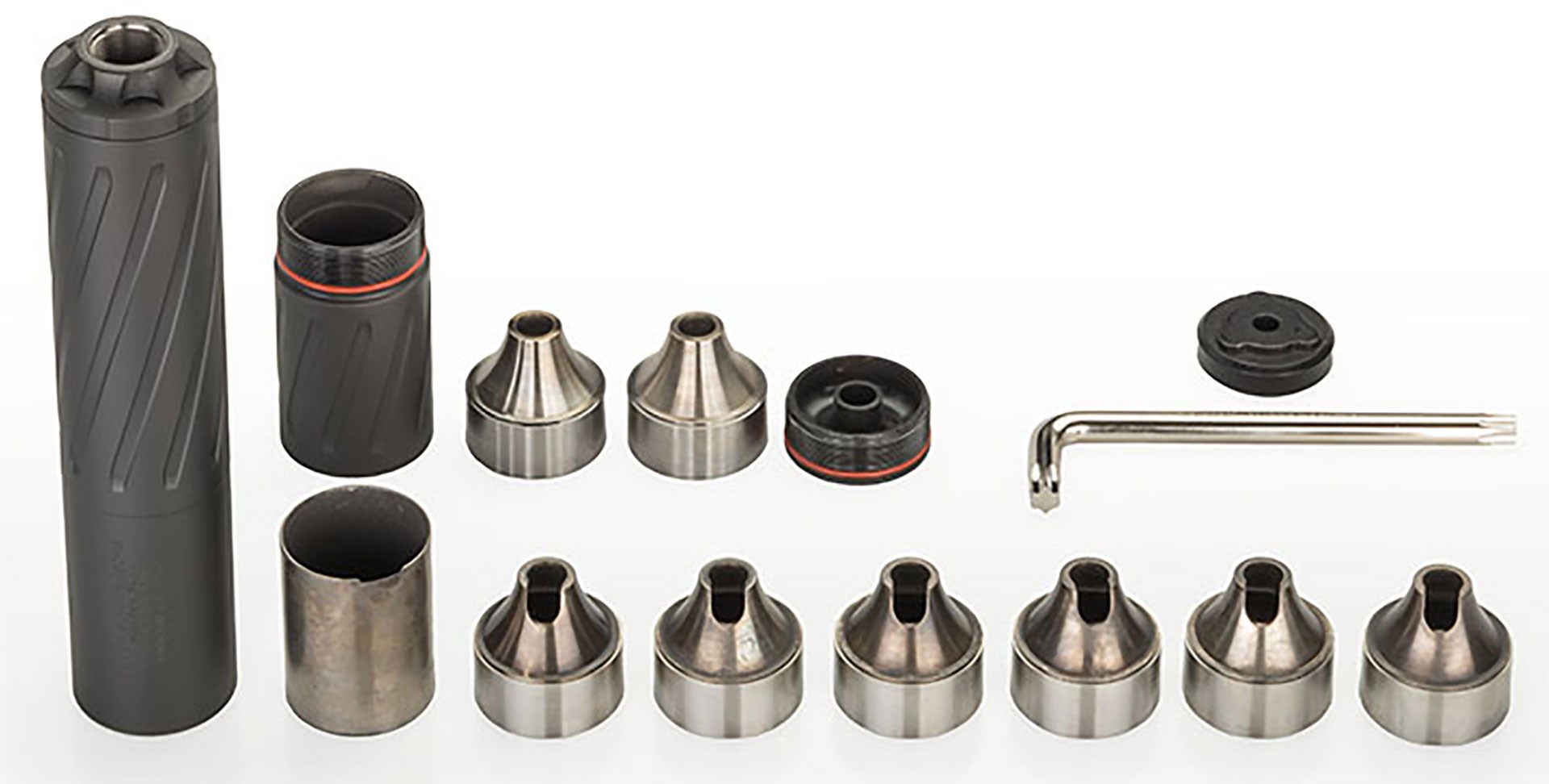 Because suppressors slow the gas that follows a bullet down a barrel, they also collect the debris that occurs when a cartridge is fired. Some suppressors are a sealed unit and others can be disassembled for maintenance. For dirtier rounds, such as the .22-cal. rimfire with its exposed lead bullet, you’ll want a suppressor that you can take apart and clean. For a high-powered rifle that uses jacketed bullets, a sealed suppressor may be fine and you have the added benefit of extra strength.

Two: Is Your Firearm Suppressor Ready? 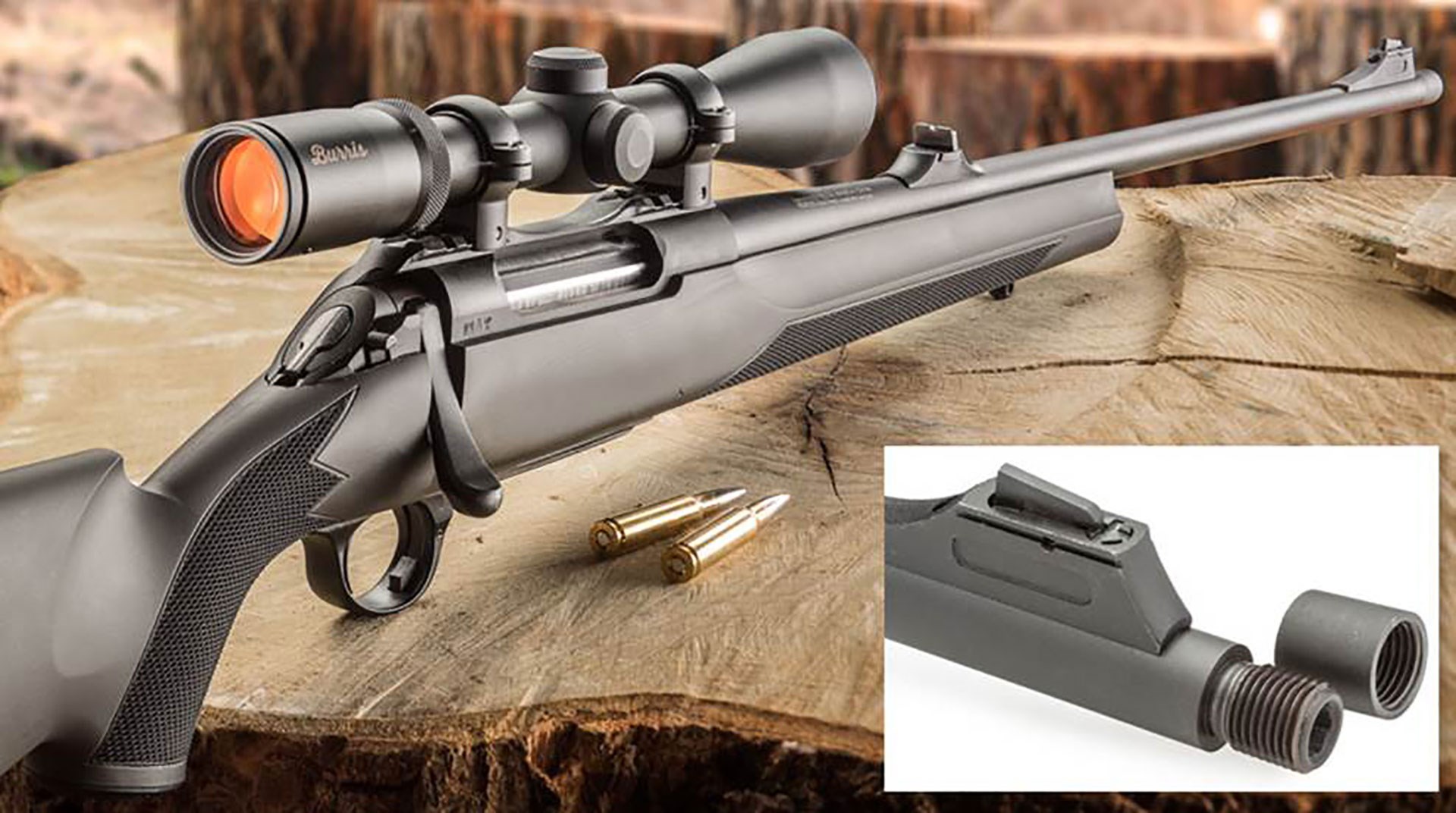 Many firearms, like this Sabatti Saphire, come from the factory  “suppressor ready.”

An increasing number of firearms come from the factory in “suppressor ready” format, usually meaning that their barrel is threaded on the muzzle or have a quick-detach device that allows a suppressor to be mounted.

If your firearm is not suppressor ready, you have several options. If it has enough of its barrel exposed (semi-automatic handguns usually do not), you can have it threaded. Threading a firearm’s muzzle for a suppressor attachment is a crucial job, as the threading must be concentric to the bore or the bullet could strike the internal parts of the suppressor as it exits. If you need to get the barrel of your firearm threaded, seek out a competent gunsmith who is experienced in this type of work. Some suppressor retailers also offer muzzle threading services. Expect to pay $100-$200 for the job.

If you plan to get a suppressor with a quick-detach mount, you can install a compatible muzzle device on your firearm, if the muzzle is threaded. If you have a firearm with an easily removable barrel, such as a semi-automatic pistol, you may be able to purchase a ready-made, extended and threaded barrel, which typically cost between $75 and $250. 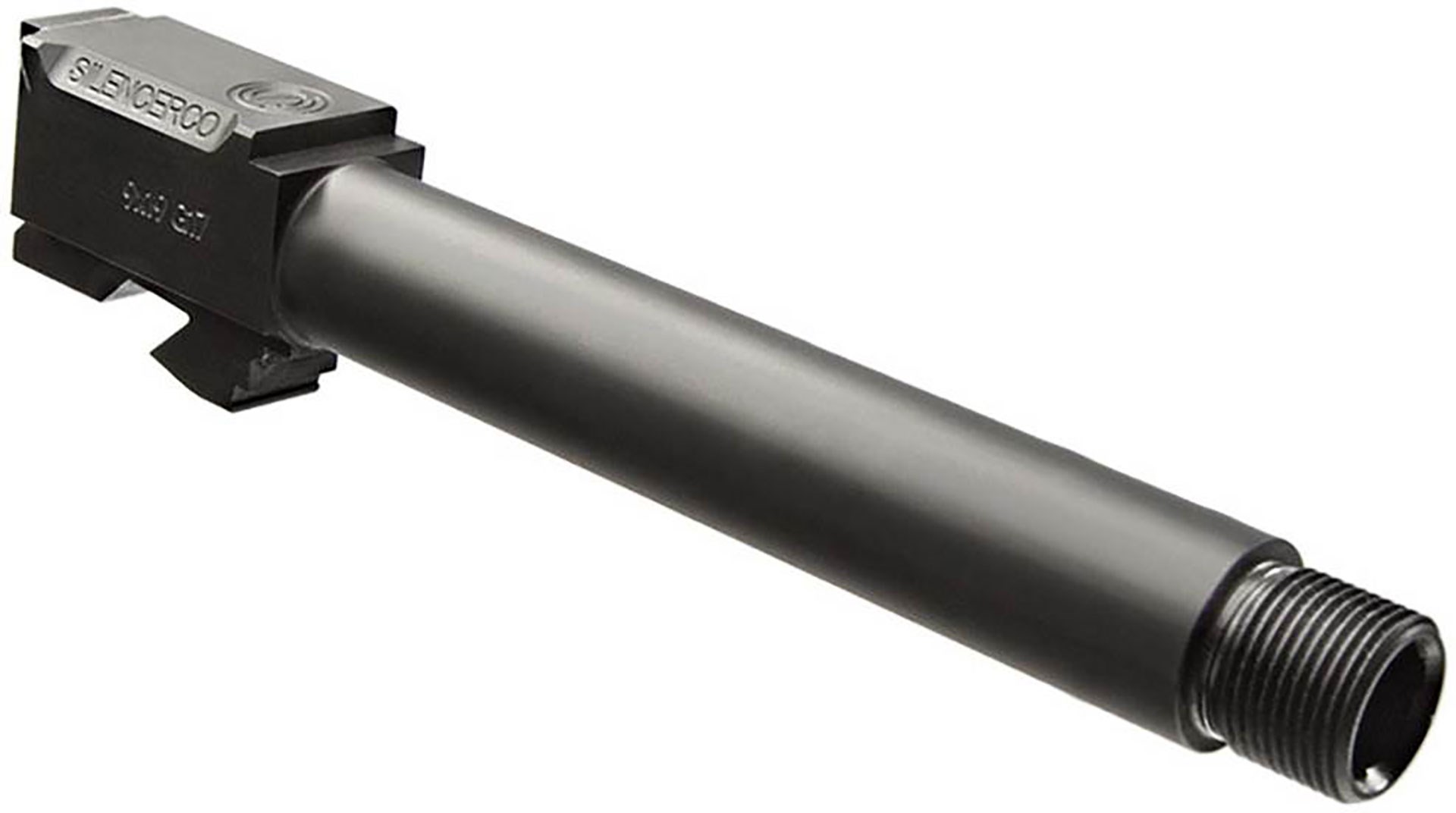 If your semi-automatic handgun is not set up for suppressor use, you can buy an aftermarket barrel that is already threaded for a suppressor, like this SilencerCo barrel for Glock pistols.

The Ruger Silent-SR ISB is an integrally suppressed barrel system for the Ruger 10/22 takedown rifle.

Because a suppressor has a larger diameter than the barrel, when adding a suppressor to a firearm with iron sights you may have to install higher sights. Suppressor-height sights are available for most common semi-automatic handguns.

In gas-operated rifles a suppressor causes more back pressure, meaning you may need an adjustable gas block to regulate the amount of force that operates the action. In the case of the AR-15, you may also need to upgrade your rifle’s buffer system with a heavier buffer. Consult with the manufacturer of the suppressor you plan to purchase on what modifications you may need to make on your semi-automatic firearm to ensure that it functions properly with a suppressor.

Three: What is Your Budget?

Suppressors range in price from $200 for a basic .22 rimfire suppressor to over $2000 for suppressors designed for the .50 BMG (don’t forget to factor in the cost of a $200 “tax stamp” that you will be given when your ATF Form 4 application is approved).

What do you get for the extra money? Things like more sound reduction, a more compact size and modular flexibility. If your suppressor is intended for use on the range, size and weight may not matter. To the hunter, however, every ounce and inch counts. Lightness, in the suppressor world, usually comes from the use of titanium, which is expensive.

The Mossberg MVP rifle (right) comes equipped with a SilencerCo Saker Trifecta muzzle brake that incorporates a quick-detach system that pairs with SilencerCo’s Saker line of suppressors. The barrel on the B&T GHM9 pistol (left) comes both threaded and with a HK-style three-lug adapter for suppressor mounting.

Four: Where Will You Buy Your Suppressor From?

Not just every gun shop or firearms retailer can sell suppressors. A suppressor retailer must have a Class III Federal Firearms License.

You can also purchase a suppressor online and have it shipped to a dealer with a Class III license. Typically a retailer will charge a transfer fee for a suppressor that was not purchased directly from them.

Unlike many other countries, don’t expect to waltz into a gun shop and walk out with a suppressor the same day. Taking possession of your new suppressor will have to wait on the approval of your Form 4 application with the ATF.

In recent years, some companies have streamlined the process in innovative ways, particularly Silencer Central, which has pioneered an approval and delivery process that allows suppressors to ship right to your front door.

Five: Be Prepared For The Wait

Waiting for approval on your Form 4 tax application that is needed to take possession of your new suppressor will make saving your pennies, deciding on which suppressor to buy and convincing your significant other why you need one, seem like the easy and quick part of the process. While the wait times for approvals have recently averaged between eight months to a year, newly-released eForm 4s promise to reduce the wait down to 90 days.

Still have questions? Suppressor manufacturers and retailers are experienced in walking customers through the process of choosing the right suppressor for their needs and helping you wade through the legal red tape necessary to bring one home.

Choosing The Right Suppressor To Buy

AZ: Pima County Board of Supervisors To Consider Resolution Calling for Repeal of the State Firearm Preemption Statute!