June 30, 2022 Guns In The News
Home»US News»Guns Buyback Florida Fail: In A Population Of 2 Million, A Whopping 300 Guns Were Turned In
US News

I love gun buybacks. Not because I’m anti 2nd Amendment, anti-American or anti-gun. But because I like a good chuckle now and then.

And nothing gives me a heartier chuckle than someone turning in a broken rifle, or a couple of pieces of pipe strapped to some wood, and walking away with $150. (or a $50 Walmart Gift Card in this case).

Now, do not get me wrong, I do hate to see taxpayer’s money being thrown away, but at least, instead of lining the pocket of some cop or politician that is on the take, it’s going to citizens that did some independent thinking. And if they made a slam fire shotgun, they even did a little bit of work for that money.

Gun buybacks are, and always have been, a scam. It is not a “normal scam,” where someone tricks someone into handing over their bank info or sets up a Go Fund Me for their child with cancer (there is no cancer, and that is not their kid!)

It is the type of scam, where an organization states, if we do X, then Y will happen.

The X for this scam, “We are going to buy back guns!”

The Y for this scam, “Criminals are going to give up their guns!”

No, that’s not what happens, EVER! A criminal is not going to get within a football field of a half dozen cops with guns. And they certainly aren’t going to give up the tools of their trade! Even the most down and out, hard luck mechanic will go homeless before selling their tools. A journalist will have a death grip on their laptop and let everything else go before they lose their tool to make money.

Criminals are the same way. They know, in order to keep doing crime, they need their tools. And for a bad guy, there’s nothing more valuable than a gun. No #baddies are going to turn in their guns.

So where do these guns that gun buybacks receive, come from? The opposite of someone wanting to keep his or her guns… People that do not want their guns. 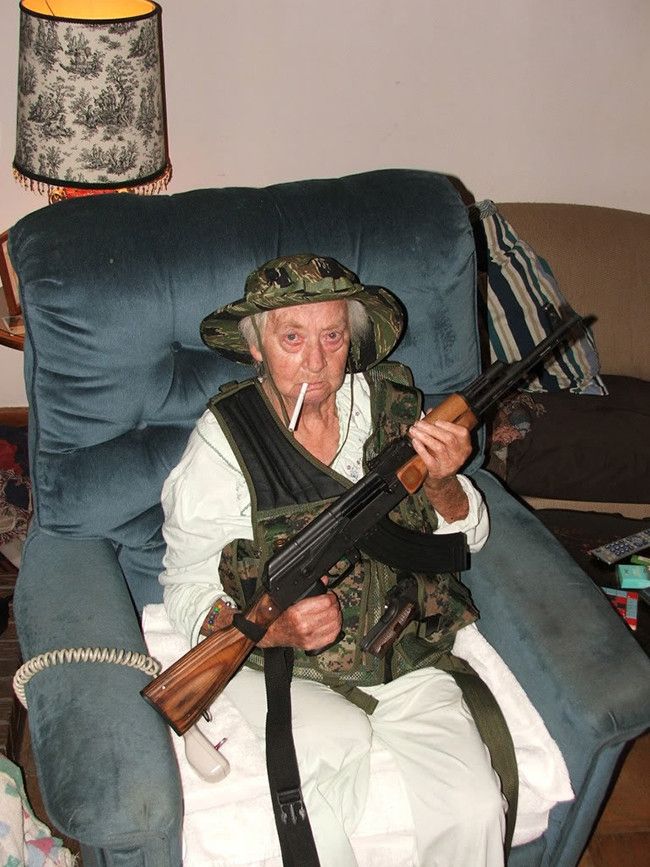 Older people. Single women. People that inherited their dad’s guns, but since they never bonded with their dad, never went shooting with him, they do not have any sentimental connections to those guns.

That makes me cringe, thinking of losing my dad’s guns. I only have a couple from him. They are almost 70 years old… and you will literally have to pry them from my dead, cold hands to get them.

Even if I lost everything, the very last things I would have, are those guns, my dad’s ashes, his military flag and his dog tags. Moreover, if you see me carrying those items, you would be ill-advised to try to remove any of those items from me. I surely would not volunteer to give those up. 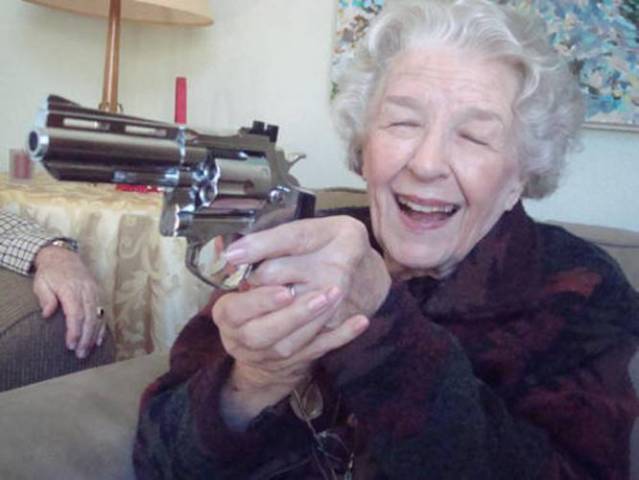 I would much rather have granny keep her six-shooter, or her dead husband’s plinking rifle than turn it in. And I definitely would want a son or daughter to keep their father’s guns, for that point in their life when they realize that they finally miss him. Maybe if they did keep these firearms, gun buybacks would finally die and go away.

Until then, misguided septuagenarians, sour offspring, and creative citizens will fill the tables of gun buybacks, giving the local constabulary their Instagram and Twitter evidence that “BUYBACKS WORK!”

The problem as I mentioned earlier… those guns were NEVER on the street. 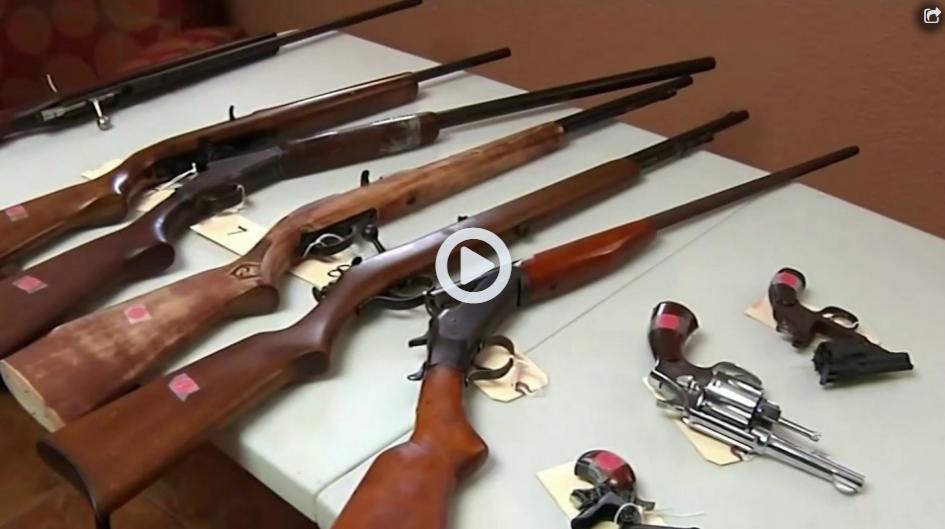 Cops have gotten smarter with their PR though.

They acknowledge to a point, that Joe Holdup, and Antwon Carjack didn’t turn in their weapons, and so the cops say things like:

“An unwanted weapon can quickly become a forgotten weapon, and a forgotten weapon is less likely to be properly secured or stored. That gun can be stolen or otherwise used inappropriately outside the owner’s wishes.” – Clermont, Florida Sgt. Malcolm Draper said.

I bet Sgt. Draper is tired from all those logic leaps he did.

The event is called Kicks 4 Guns. Started 21 years ago, they initially gave out sneakers. I presume since sneakers have gotten so expensive, they switched to Walmart Gift Cards.

It is a no-questions-asked (which is good for grandma, cause all she knows is, it was grandpa’s gun) and no ID necessary. Cops pretend, as if “no questions” is going to bring in everyone from the hood. I can absolutely guarantee if someone looking like this, 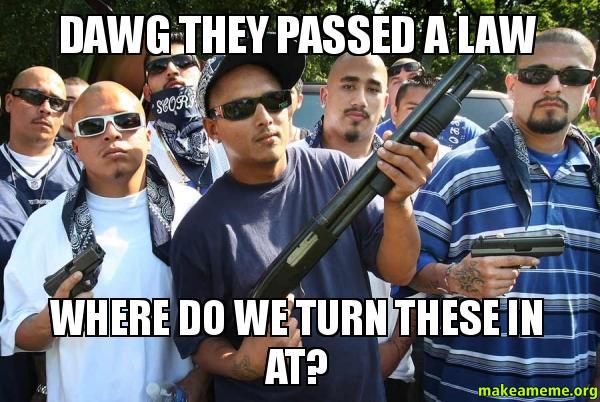 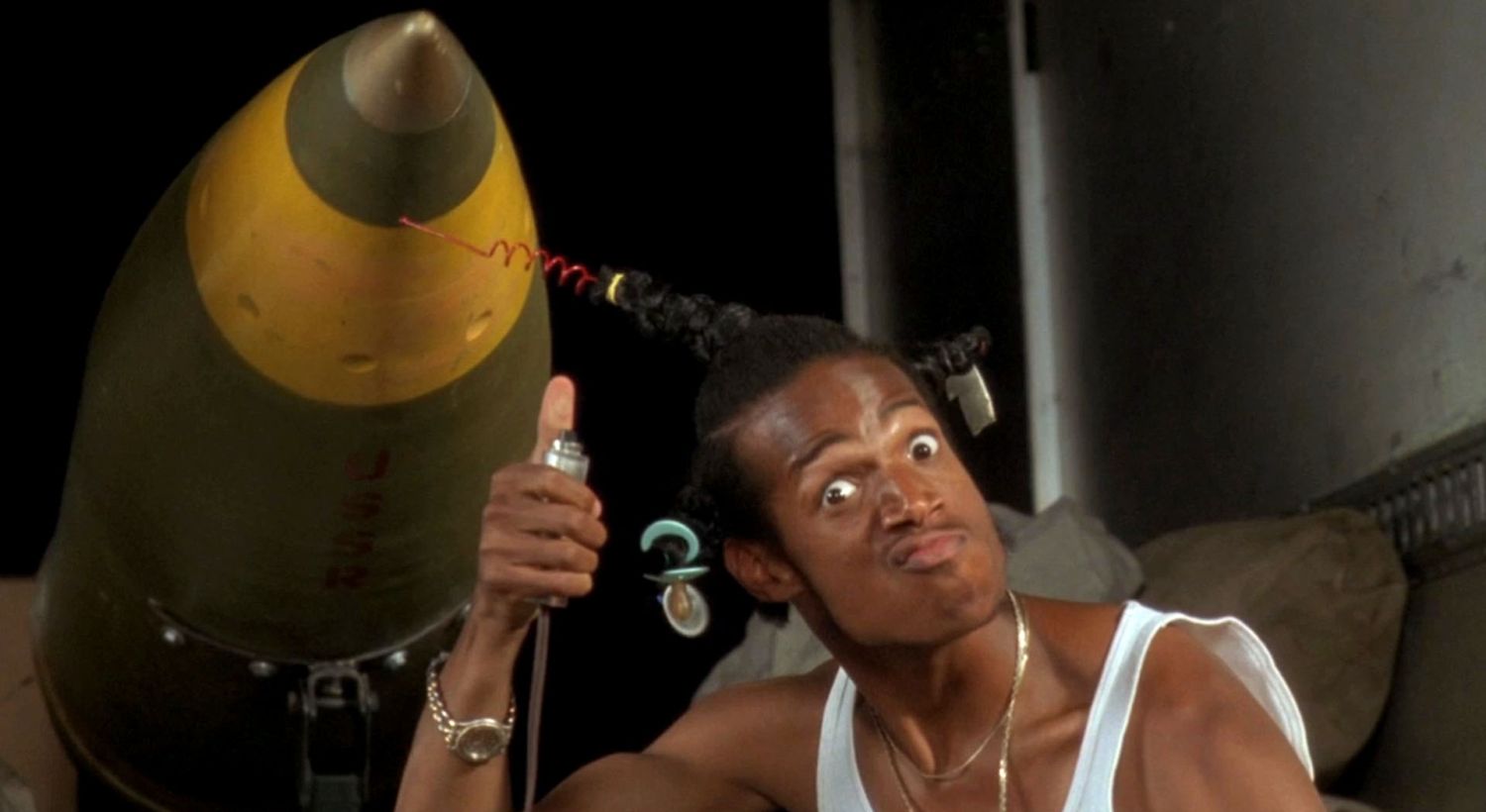 … there are going to be questions! Maybe not right then and there, but a couple of blocks down the road, somebody is getting pulled over.

I hadn’t really looked at that first picture before… a shotgun and couple cheap ass pistols. Hey, maybe the Vatos did turn in their guns at these events! 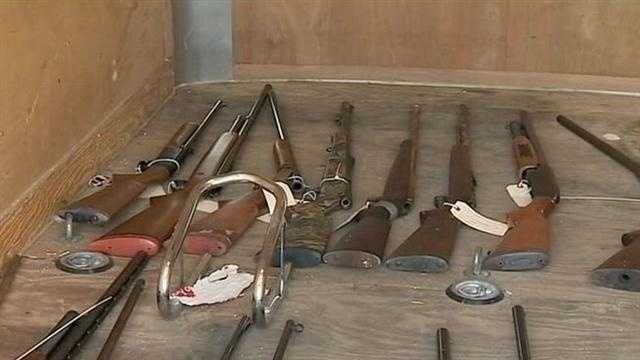 Wow. I bet the Floridians in the Central Counties feel so much safer!

If you are not familiar with gun ownership stats, associations like the NRA put it around 1 gun for every 3 people. However, the math is not that simple, 1 out of 3 people do not necessarily own a single gun. There are those that own, many, many more than that.

Still, 1 in 3 is a good way to estimate, how many guns are in a particular area. And this IS Florida after all.

So, 1.9 Million people… let’s divide that by 6, instead of 3 for a ‘cautious statistic’. That means there should be a bare minimum of 300,000 guns in that area that the gun buyback covered. That number sounds really LOW for swampy Florida, but let’s go with it. 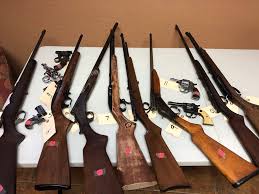 Cops exerted their effort to get 0.1% of the guns “off of the street” aka, Grandma’s broom closet.

And since most scardey cat leftists have not ever seen “a lot of guns”, or a real gun owner’s collection, hearing the number 300, SOUNDS like a LOT OF GUNS!

Tables “filled” with guns LOOKS like a LOT OF GUNS!

But it’s not. Look at this pathetic display. 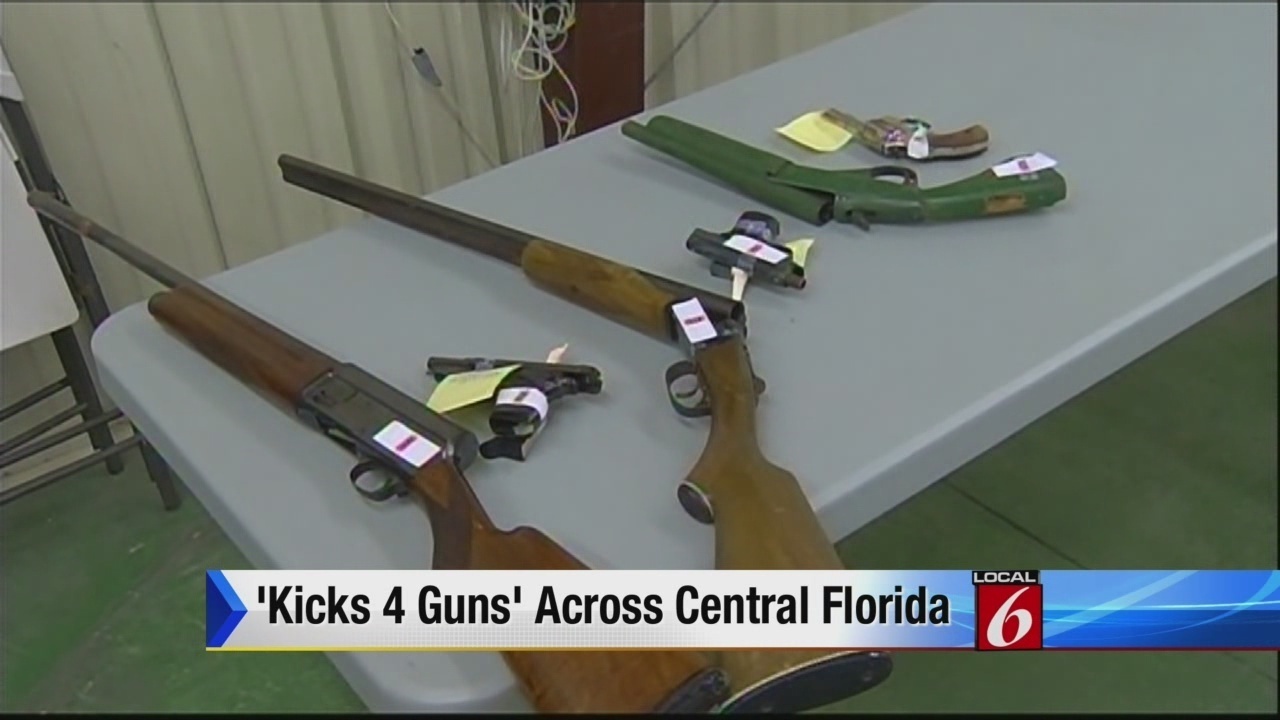 Do you see what’s on those tables? That’s EVERYTHING they have!

There’s no Glocks, no AR-15’s. Heck, they don’t even have a sexy Space Rifle looking Shotgun as I have right now, that I got from Rock Island Armory to review… 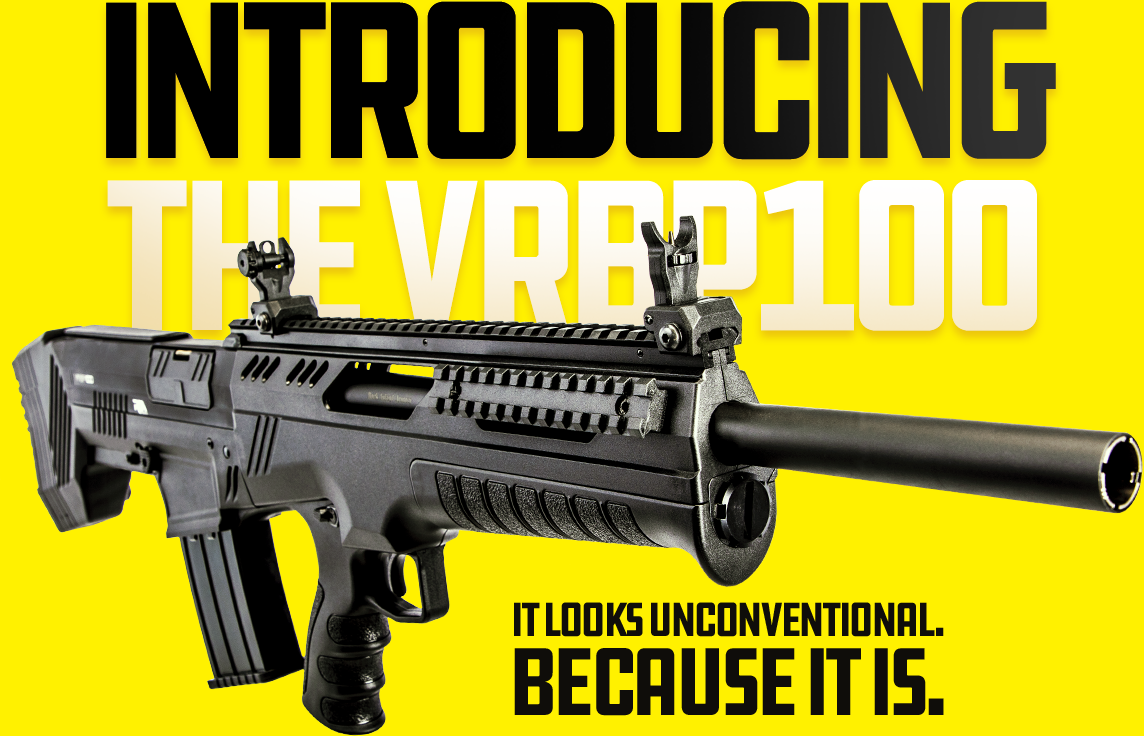 Kicks 4 Guns brags that they have taken 10,000 guns “off the streets”. More like some brooding offspring’s sock drawer.

300 Guns. Fear not! The world is safer now that Grandma no longer has Grandad’s single-shot, break-action shotgun in her pantry!