Is it the rifles chambered for it or is it the cartridge itself that keeps the .30-30 Win. an enduring favorite of American shooters and hunters? Certainly, the .30-30 has remained popular for decades because it was originally chambered in handy, compact rifles, such as the lever-action Winchester Model 94s and Marlin 336s, and continues on in newer rifles, such as the Mossberg 464 and Henry lever-guns. But the cartridge itself is also compelling, as it delivers sufficient bullet energy and a flat enough trajectory to handle many hunting chores, all with mild enough recoil to encourage lots of practice. 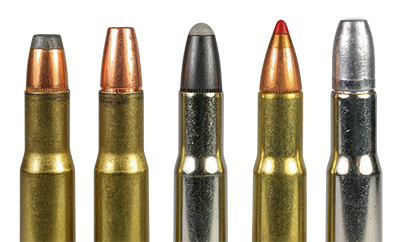 Bullets
The structure of standard .30-30 bullets is no more complicated than a jacket with an exposed lead nose to ensure expansion at relatively slow impact velocities. These bullets include the Sierra Pro-Hunter Flat Nose and Hornady’s InterLock Round Nose projectiles.

The latest bullet designs for lever rifles, though, offer more retained weight, broader expansion, increased downrange energy and a flatter trajectory. Barnes and Cutting Edge have done away with lead cores altogether; Barnes’ TSX bullets are made of copper, while Cutting Edge Lever Gun ESP Raptors are machined from brass. Both brands have a wide, hollow nose to facilitate expansion. The four petals on the nose of 150-grain TSX bullets peeled back on impact and opened up to a diameter of 0.580″ when they hit bundles of newspapers at an impact velocity of about 1,900 f.p.s.

Swift Lever Action A-Frame projectiles and Nosler Partitions are designed to expand at low velocities while their dividing walls keep the shank intact. The Swift 150-grain is constructed with a flat nose and pure-lead front core bonded to a pure-copper jacket. When A-Frames hit bundles of newspaper at a velocity of 2,000 f.p.s., the front core tore away from bullets that expanded to a diameter of half an inch. That extreme upset of the front core indicates Lever Action A-Frames will expand, as Swift states, at velocities as low as 1,200 f.p.s. 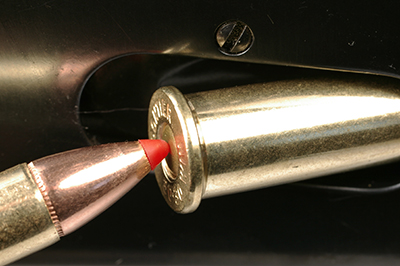 The elastic tip on Hornady’s FTX bullets allow for safe use in a lever-action rifle’s tubular magazine while also improving trajectory.

Hunters used to accept the modest ballistics of blunt-nose bullets required for lever-actions with a tubular magazine as necessary for safety. Then came the Hornady Flex Tip eXpanding (FTX) with a pointed elastic tip that removes the danger of a bullet tip firing the primer of the cartridge ahead of it in the magazine during recoil. The FTX’s G1 ballistic coefficient (BC) is 0.330, compared to the 0.232 BC of the Combined Technology 150-grain Ballistic Silvertip. The FTX fired about 70 f.p.s. slower than the Silvertip, resulting in the FTX shooting about 1″ flatter out at 200 yards than the Silvertip. At that distance, though, the FTX retains about an additional 15 percent more ft.-lbs. of energy than the Silvertip.

Turning the .30-30 Win. into a small-game rifle is a stretch. A lightweight bullet, like the Sierra 125-grain Pro-Hunter, fired upwards of 2,500 f.p.s., seems like it should significantly flatten trajectory, but the blunt bullet rapidly sheds its velocity to actually drop a couple inches more than a 150-grain Ballistic Silvertip at 300 yards. These light bullets hit so high above the point of aim on a 100-yard target, that iron sights on a rifle may not have enough downward adjustment to bring the bullet and sights into alignment.

On a pleasant evening last summer, I shot my Winchester Model 94 .30-30 made in 1936. The lever operated the action as smoothly as oil on glass, and inside an hour, 100 fired cases cluttered the ground. The cartridges were loaded with cast lead-alloy bullets, and all that shooting cost about the same as a movie ticket—and was much more entertaining.

The .30-30 Win. is a perfect cartridge for shooting cast lead-alloy bullets. Its neck has plenty of length to enclose the bases of most cast bullets, thereby protecting the bases from the ravages of propellant gases. Case capacity is also rather small, so a case full of a relatively slow-burning propellant produces an even burn and low velocity spread. Standard deviation of velocity was only 19 f.p.s. for the SAECO bullet fired by 27.0 grains of W748. Propellant weight could be increased to fire the bullet at close to 2,200 f.p.s., but velocities higher than 2,000 f.p.s. raise pressure enough to distort the comparatively soft bullet, causing accuracy to suffer.

For many years, the advice was that cast bullets shot their best when a barrel bore was clean of all bullet-jacket fouling. However, laziness overcame me after firing 60-plus jacketed bullets through the Winchester Model 94 to shoot the loads in the chart below. I didn’t stop to clean the barrel but instead went right to shooting SAECO 180-grain cast bullets. They fired some tight groups, too, with an average of 1.30″ for five groups. 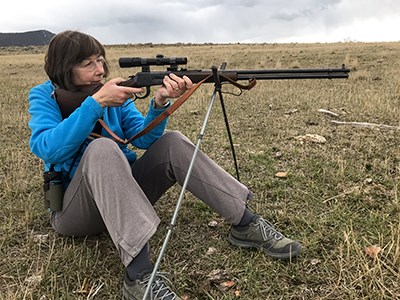 Propellants
Various reloading manuals list at least 50 propellants for reloading the .30-30 Win. with jacketed bullets. Add another 10 or so propellants for reloading cast bullets. LEVERevolution is the choice for top velocity; CFE 223, though, trails it by only 100 f.p.s. If those fail to provide your accuracy aims, you can’t miss with powders such as IMR 3031 and 4064, H4895, TAC and Varget. A relatively slow-burning powder is the best for shooting cast bullets. Bullets cast of lead alloy are considerably softer than jacketed bullets, and too much pressure distorts them and ruins accuracy. The Lyman 50th Edition Reloading Handbook lists 10.6 grains of Unique that fires 170-grain cast bullets at 1,568 f.p.s. as producing 36,000 copper units of pressure (CUP). In contrast, the bullet reaches about the same velocity loaded with 22.5 grains of IMR 3031 with a mild pressure of only 18,300 CUP.

The author fired some fine groups (l.) with cast Redding SAECO 180-grain FPGC bullets paired with W748 propellant, despite not cleaning his bore beforehand. With the .30-30 Win. cartridge, cases require full-length sizing to readily fit inside a rifle’s chamber (r.).

Sizing Cases
Headspace for the .30-30 is established by the case rim, however, the case must be properly sized for cartridges to fit easily in the chamber. To reduce case stretching, it’s tempting to size cases to set shoulders back a minimum amount as with cases intended for a bolt-action rifle, say 0.002″. Lever-action rifles, though, with locking lugs at the rear of the bolt, lack the camming action of a bolt gun to seat a cartridge a touch long at the shoulder. Case shoulders become work-hardened after they have been fired and sized a few times, and sizing them a minimum amount may not set them back sufficiently. My RCBS full-length sizing die is screwed into my press with tight contact with the raised shell holder. That position sizes case bodies and pushes shoulders of fired cases back 0.004″ to allow for easy chambering. Measuring the case head to the datum line on the shoulder of factory-loaded .30-30 Win. cartridges indicated they were an additional 0.004″ to 0.017″ shorter.

Working the action is a big part of the fun of shooting a lever gun. This spring, I spent an evening shooting two Winchester Model 94 .30-30s. With those rifles, I could have been a Western sheriff ridding the territory of dry-gulching bandits, a Yukon miner defending his claim from squatters or a deer hunter clad in plaid wool stalking game beneath the hardwoods.

As the shadows began to lengthen, I started to put away my rifles. But, before heading home, I once again began to wonder whether it was the Model 94 or the cartridge itself that has made the .30-30 Win. a lasting favorite of American shooters and hunters.