Springing into a flourishing arena, such as modern sporting rifles (MSRs), is simple—maintaining a presence through the market’s ebb-and-flow cycles, however, is not. The latter requires innovation and value, a recipe that Springfield Armory has followed with its well-liked Saint series of AR-pattern rifles. Since the line debuted in late 2016, the company has extended it to include the Victor and Edge variants, and the newest addition to the Edge series is the subject of this review, the top-tier Accurized Tactical Chassis (ATC) Elite.

Developed in conjunction with Drake Associates, Inc., of Vero Beach, Fla., the Edge ATC Elite was designed to wring out the greatest possible degree of accuracy from the 5.56 NATO AR platform. What is different? Foremost, the rifle is built on the strengths of Drake’s Athena chassis system. Machined from anodized 6061-T6 aluminum and finished in Coyote Brown Cerakote, the rigid design permits a free-floated barrel/barrel nut/gas system to improve accuracy. Of course, crafting the lower receiver from a billet of aluminum adds weight—according to an AWS Postal Scale, the gun weighs 9 lbs., 13 ozs., sans sights or optic.

Internally, the Springfield Saint Edge ATC Elite is configurated like a typical direct-impingement AR-15. But a monolithic lower—developed in conjunction with Drake Associates—and mating handguard make it unique.

The lower receiver has several noteworthy qualities that could be overlooked, including a relief cut forward of the magazine well. Ahead of that, it’s shaped for shooting from a barricade. The fore-end is also wider for shooting off sandbags or a backpack. Moreover, the monolithic lower receiver features 5″ of Picatinny rail for a bipod, a beveled magazine well, an integral trigger guard, one M-Lok interface on its bottom surface and multiple QD sling-attachment points. B5 Systems’ comfortable, purchase-enhancing Type 23 P-Grip was selected for the Edge ATC Elite.

Four M-Lok attachment locations can be found on either side of the handguard, which is integrated into the ATC chassis. Interestingly, the handguard can be quickly removed by pulling downward on a button on the bottom of the fore-end and loosening a screw—surely a boon for maintenance and cleaning. Spanning the length of the top of the handguard is a Picatinny rail, which, when combined with that atop the upper receiver, provides more than 20″ of continuous rail.

The bottom surface of the rifle’s 6061-T6 aluminum chassis has both a section of Picatinny rail and an M-Lok slot for the installation of a bipod and/or other accessories.

The upper receiver is made from forged 7075-T6 aluminum and receives the same treatment as does the lower receiver. Affixed to the front of the receiver is an 18″ Ballistic Advantage barrel that ends with Springfield’s own muzzle brake. The Melonite-treated tube has a 1:7″ twist and is chambered in the innovative .223 Wylde, which, due to its dimensions, permits the best possible accuracy with both .223 Rem. and 5.56 NATO ammunition.

To optimize performance, reliability and durability, the M16 bolt-carrier group features a Carpenter 158 steel bolt that is HPT/MPI tested and is Melonite-treated. Powering the rifle is a mid-length, direct-gas-impingement system with a pinned, low-profile gas block. This works in unison with a carbine “H” heavy tungsten buffer assembly to ensure optimal performance while mitigating felt recoil and dwell time.

Given its focus on accuracy—Springfield guarantees the rifle to deliver sub-m.o.a. groups at 100 yards using match-grade ammunition for three shots and in the hands of a skilled marksman—it makes sense that a highly customizable buttstock was selected. In the case of the Elite model, the company selected B5 Systems’ Precision stock. Made of mil-spec materials and finishes, the six-position stock is adjustable for length of pull and comb height, affording the user nigh limitless customization for a perfect fit, regardless of his or her shape or the optic used. The thin, well-fitting recoil pad is tacky to prevent slippage. Like the end of the receiver, the buttstock has QD sling mounts. 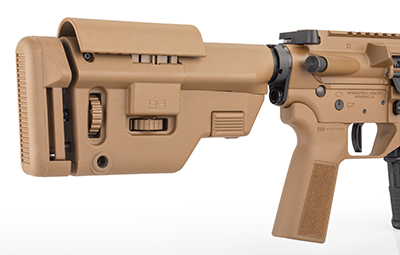 Dual thumbwheels on the B5 Systems’ Precision stock allow for minor adjustments to the rifle’s length of pull and comb height, while the entire stock can be positioned at six settings along the buffer tube, allowing for a wide range of adjustability.

Students of the AR platform will find the fire controls to be familiar in placement and operation. The LaRue Tactical MBT-2S-SB two-stage trigger, which is machined from S7 tool steel, features a flat face, and the unit on the test gun broke cleanly at 4 lbs., 1 oz. There was no creep or overtravel, and the reset was exceptionally short.

To determine if the test rifle could meet Springfield’s standard, as well as the more rigorous American Rifleman protocol of five consecutive, five-shot groups at that same distance, we gathered several loads featuring heavyweight projectiles and headed to the range. We topped the rifle with a trusted Leupold 4.5-14X 40 mm VX-3i and, from a Caldwell Lead Sled Solo, commenced firing. We were pleasantly surprised with the results. 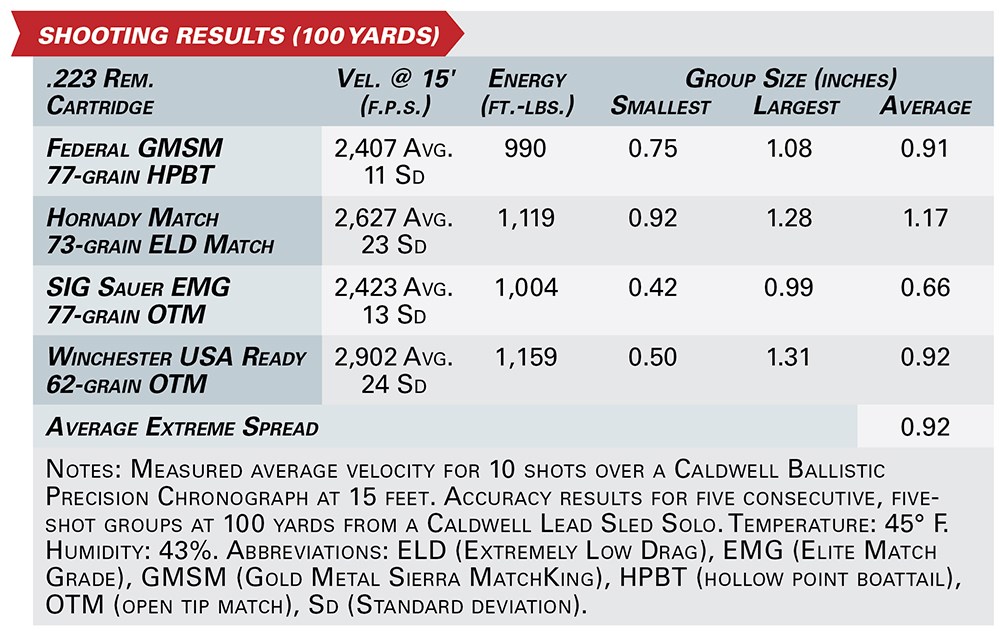 Of the loads, the most accurate proved to be SIG Sauer’s Elite Match Grade 77-grain OTM, which averaged a tight 0.66″ for five groups. The smallest single group measured 0.42″, the first three shots of which measured only 0.17″. Obviously, the ATC Elite has the features needed for top-level accuracy.

That level of accuracy isn’t by happenstance; it comes with a thoughtful and faithfully executed design. No single feature is responsible, either—it’s the synergy between the stock, barrel and trigger—and the AccuTite Plus tension system minimizes play between the receivers via setscrews. During accuracy and function testing, the gun experienced no failures to feed, fire, extract or eject. Concerning the latter, it nicely piled the spent cases about 6 feet to the right, making cleanup easy.

If there’s a drawback to the Saint Edge ATC Elite’s design, it’s weight. That’s to be expected with a monolithic, chassis-style rifle, but it is surely offset by its phenomenal accuracy. Anytime, anywhere the pinpoint placement of bullets trumps portability, such as competition, varminting (from a bench) or limited medium-game hunting (where legal), Springfield’s new rifle would be an excellent choice. It’ll also be the talk of the range, which we saw firsthand.

The Springfield Armory AR-15 line has grown leaps and bounds in a relatively short period. That’s because the company has found the recipe for success, and this might be the sweetest example yet.

Socialist Democrat Introduces Bill in House to Tax Every Gun $100