This review of the TriStar Arms Setter S/T shotgun appeared originally in the September 2015 issue of American Rifleman. To subscribe to the magazine, visit the NRA membership page here and select American Rifleman as your member magazine.

Entry-level shotguns are a mixed bag. Some qualify as tomato stakes, and others, like the TriStar Setter S/T, provide very good value for the money. TriStar Arms calls itself “the Value Experts,” and the company’s Setter over-under certainly backs up that boast.

Some years ago, TriStar President Gus Bader investigated and then invested in making shotguns in Turkey. There, firearm manufacturing was still predominately a cottage industry, as gunmaking once was in Britain.

However, some specialized crafts, like checkering or engraving, are now being performed by lasers for quality and economy. And although one does not normally associate Turkey with fine-quality shotguns, they do indeed exist. So solidly does Bader and TriStar believe in Turkish quality that they provide a five-year warranty on their shotguns.

The Setter is made by Arthemis, and has sleek lines and handles very much like a top-of-the-line over-under. In checking the swing characteristics, it compares exactly with a classic A.H. Fox and very closely to a couple of pricey Italian over-unders.

Often bargain guns have rather blocky, even crude, lines, but the Setter is sleek with a longer pistol grip—not quite a Prince of Wales style—but one that flows into the comb of the stock. The slab-sided fore-end has a slight Schnabel, even though the wood is sufficiently thick that the lipped fore-end isn’t really necessary for reinforcement.

The 28″ barrels are topped with Beretta Mobilchoke-style screw-in chokes. The Setter came with two flush-mounted tubes, one with four notches, sans any other identification, that measured 0.0095″ of constriction—improved cylinder—from the 0.7250″ bottom barrel’s cylinder measurement.

The other with three notches gave a 0.015″—light modified—constriction in the 0.7195″ top barrel. These chokes are perhaps the most useful constrictions for all-around upland and sporting clays shooting. Also included are three extended chokes in improved cylinder, modified and full constrictions. We shot patterns with the Setter so arrayed, and the results are in the adjacent illustration.

At the 16-yd. fitting plate, the Setter shot dead on vertically. However, the tester would have needed an additional 1/4″ cast-on to center the pattern horizontally.

For sporting clays and patterning, we used Rio TLT2475 7/8-oz.—310 pellet—loads of No. 7½ shot advertised on the box as 1340 f.p.s. Over our chronograph the loads averaged 1361 f.p.s., on a 90-plus degree day. This is a popular load with sporting clay shooters and hunters seeking good downrange results with very light recoil, which was a noticeable advantage with the 7-lb., 4-oz. Setter on the patterning range and at sporting clays where a large number of varying targets were broken.

The gold-plated trigger is mechanical, i.e., not dependent on the recoil of the first shot to set the sear for the second shot. It’s one we like because if it’s the only flush of the day and the first barrel fails to fire, you still have a second shot. The trigger pulls averaged 5 lbs., 2 ozs., for the bottom barrel and 6 lbs. for the top. A little heavy, but not all that bad for an entry-level over-under. There is quite a bit of preliminary takeup in the trigger, but with a rooster cackling away, we doubt even the most finicky shooter would notice.

The top tang safety not only blocks the trigger, but the hammer sear and the hammer itself, making this gun very safe against being dropped and other hard knocks. The safety also incorporates the barrel selector. In use, the safety must be to the rear in the “safe” position, then the slide can be moved right to select the under barrel and left to shoot the top barrel first.

We found the safety slide to be free to move from the on-safe detent to the fire position, but the selector was really stiff and would not be handy for a split-second barrel change in the field. That said, in our collective years of hunting, we have never used a barrel selector at the flush, so it’s perhaps a moot point.

The boxlock action pivots the barrels on Italian-style trunnions located on both sides of the action that mate with cutouts on the sides of the barrels. Lockup is by means of a Purdey-style sliding underbolt as used by Browning and Blaser; it’s solid and self-adjusting so the action stays tight over years of use. This locking system does increase the height of the action—a common characteristic of many over-unders—but does not detract from the gun’s lines or function.

The barrels are topped with a ventilated rib, and, as a classy touch, the side ribs that anchor the barrels are also ventilated for the rapid dissipation of heat in a hot dove field or elsewhere.

The Turkish walnut stock is very plain, but the fore-end has some swirl and burl. The checkering appears to be about 20 lines per inch, and like the engraving, too perfect for human hands, but not so for a laser. Regardless, the checkering provides firm purchase, and that’s its real purpose.

As with most entry-level shotguns, the Setter is a non-ejector. The shells, fired and unfired, are lifted high enough when the action is opened for easy removal. In today’s “ethics-centric” world, it’s not a bad feature, as fired hulls are easily removed and pocketed for proper disposal other than on a farmer’s field or in a favorite grouse woods.

In all, the TriStar Setter is an enjoyable gun to shoot and well worth its bargain price.

Rifleman Q&A: An M1917 Bayonet Made for Vietnam? 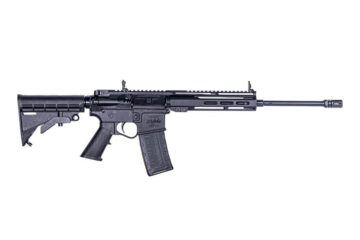