Red has become the universal dot color on reflex sights, which is likely why they’re commonly called “red dots.” But for some shooters, red may not be the most effective choice.

Visible light occupies the segment of the electromagnetic spectrum that cones in the human eye can see. Red occupies the lower end of the spectrum, with the longest wavelength, shortest frequency and lowest energy. Green sits in the middle of the spectrum with more energy, and thus more visible. On my backyard range, under a bright midday sun, a red handgun laser will be visible to about eight or nine yards before vanishing. A green laser of the same power level will reach 12 or 13 yards before washing out. With increased visibility, the color green could be an asset for some shooters. 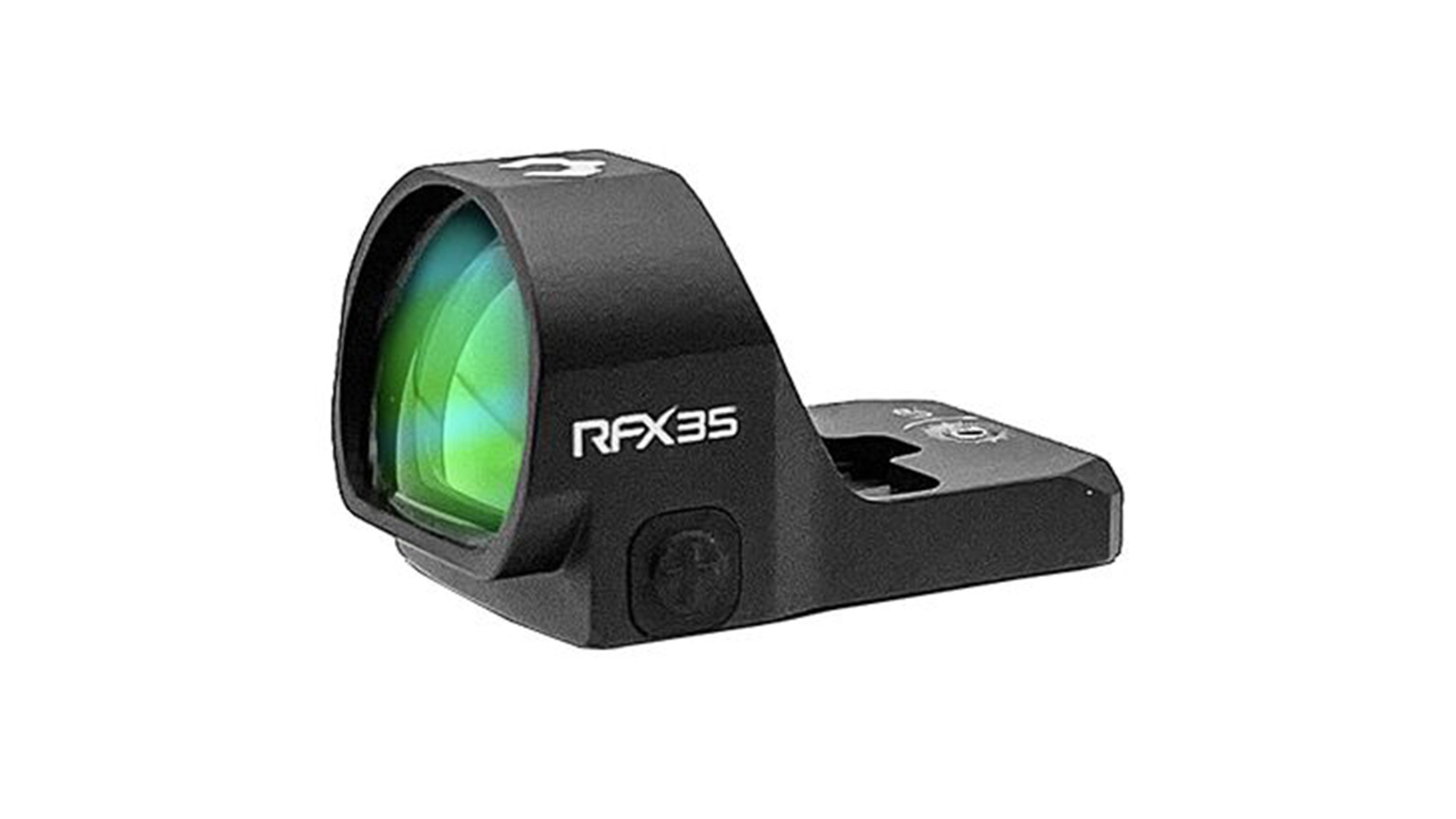 Operation of the RFX35 is with only two buttons, with the plus button on the left side shown here.

Aging eyes will change, and some of those changes can affect which visible spectrum waves will be more (or less) visible. After undergoing cataracts surgery on both eyes, I have no trouble with a red dot. But I find that when shooting iron sights, I’m better off with a green fiber-optic front sight. I know several shooters in my age group who actually have problems with red dots.

Viridian has a well-deserved reputation for green laser sights, and now are bringing that to the reflex sight market with the introduction of the green-dot RFX family. It consists of three models: the RFX15, RFX25 and RFX35. While the first two are compact sights designed for concealed carry guns, the Viridian RFX35 ($289, viridianweapontech.com) is a full-sized, big window unit that’s designed for competition and the one I chose to test. 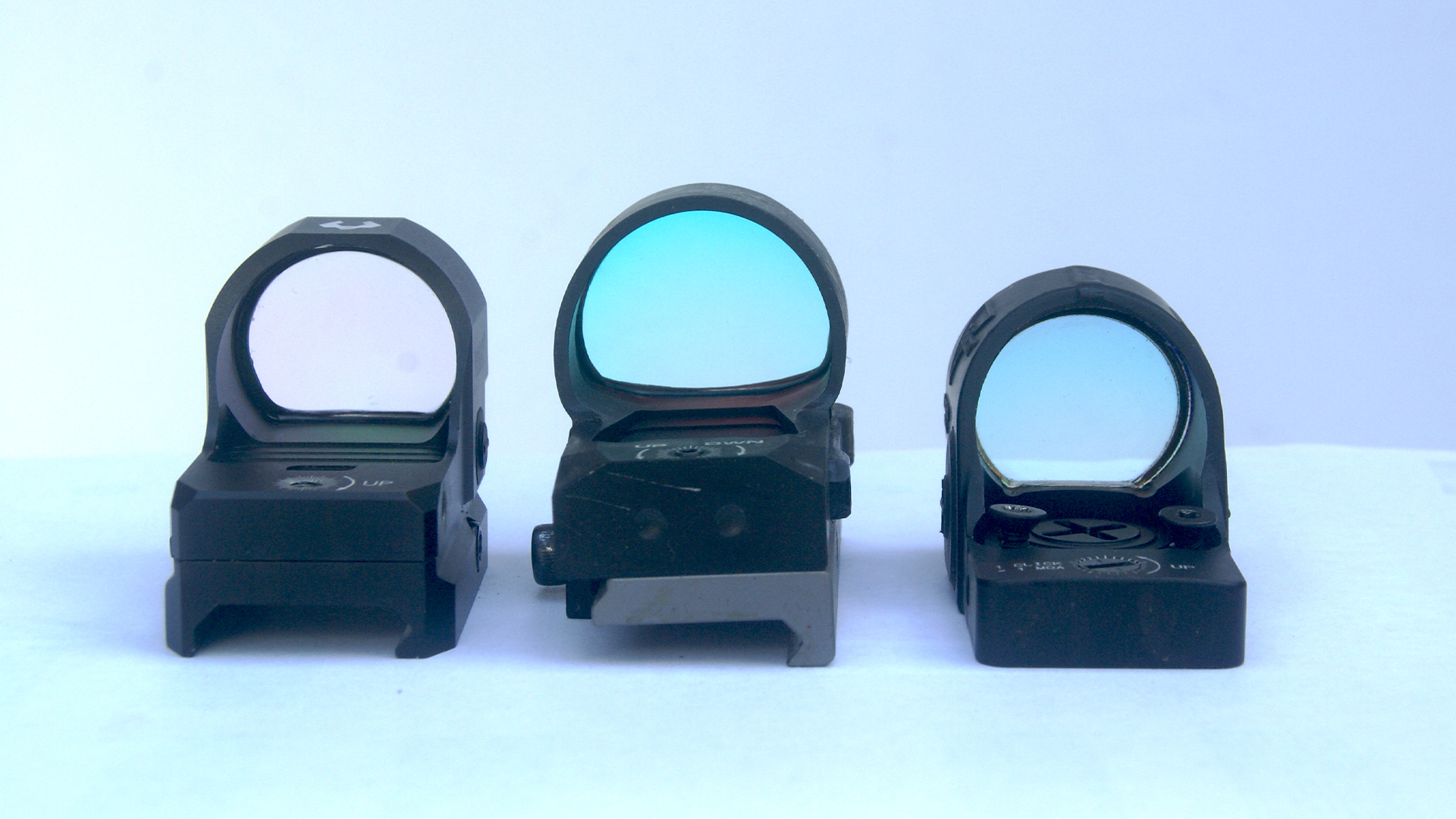 The sight window on the RFX35 to the left compares favorably to other “big window” reflex sights, such as the SIG ROMEO3 Max (center) and Trijicon’s SRO (right).

Constructed from 6061-T6 aluminum alloy, the RFX35 weighs one ounce and uses the Trijicon RMR (SRO) mounting footprint with an included Picatinny rail mount. The star of the show is the three-MOA dot, along with a generous 22×26 mm sight window. There are two night vision brightness settings and eight visible settings. Windage and elevation controls are in the customary positions and are accessible with three included Allen wrenches. Power for the RFX35 comes from an included CR2032 battery, also shipping with a snug-fitting lens cover and two sets of screws to handle direct slide or Picatinny installation.

The sight arrived mounted on the Picatinny rail with the battery uninstalled. The RFX35 battery loads from the bottom, with the advantage of lowering the sight profile to allow indexing with iron sights while directly mounted to a handgun’s slide. However, my previous experience with this mounting system has been when to a slide, some form of sealing plate must be used to prevent battery bounce and losing the dot. Lacking a plate, I’ve found a strip of PVC tape can work. Since, similar to many competitive shooters, I am currently “primer poor,” I had already decided to use the RFX35 on my Ruger Mark IV Steel Challenge Rimfire Pistol Open division .22 LR gun. The mount looked like it would make an effective sealing plate, so I popped the sight off, slipped in the battery and re-mounted the sight. I then headed to my range and set up the 25-yard bench rest to zero the gun. 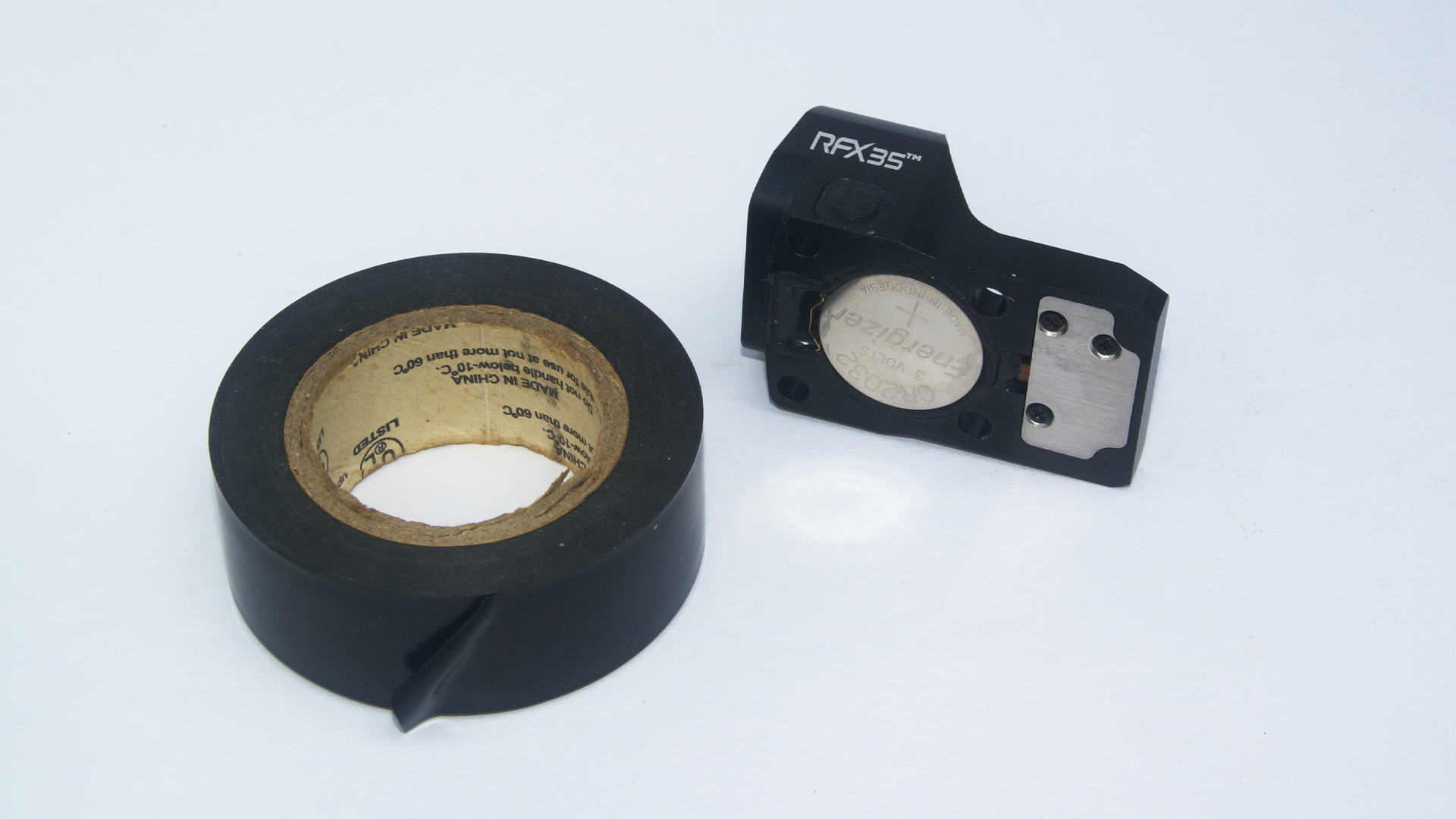 A bottom loader, the RFX35 battery may require a strip of tape if directly mounted to a handgun slide without a sealing plate. The Picatinny mount served well as a sealing plate during the author’s tests.

Operating controls consist of a plus button on the left side and a minus button to the right. From the off setting, you turn on the sight by pressing the plus button to cycle through the 10 settings until you find the one that you want. To turn the sight off, cycle the minus button until the dot disappears. Additionally, there is a sleep mode. If the sight remains motionless for two minutes, it will turn off. At the first movement, the sight turns back on at the previous setting. I timed this and it worked.

Zeroing took little time. The sight click gradations don’t correspond to MOA, instead just moving the sights. A bit of trial and error had the RFX35 zeroed within 15 rounds. The green dot was bright and a perfect circle. Although I am used to red-dot optics, the transition to green was easy. Next was a six-stage Steel Challenge club match.

First shots were at 9:00 a.m. with the rising sun about 45 degrees to my left. The highest green-dot setting was actually too bright and I turned the RFX35 down a couple levels. At the end of the match, with the sun overhead and down range, the high setting burned right through it. The dot stayed bright, the point of impact didn’t shift, and there were no battery bounce issues with the Picatinny mount. 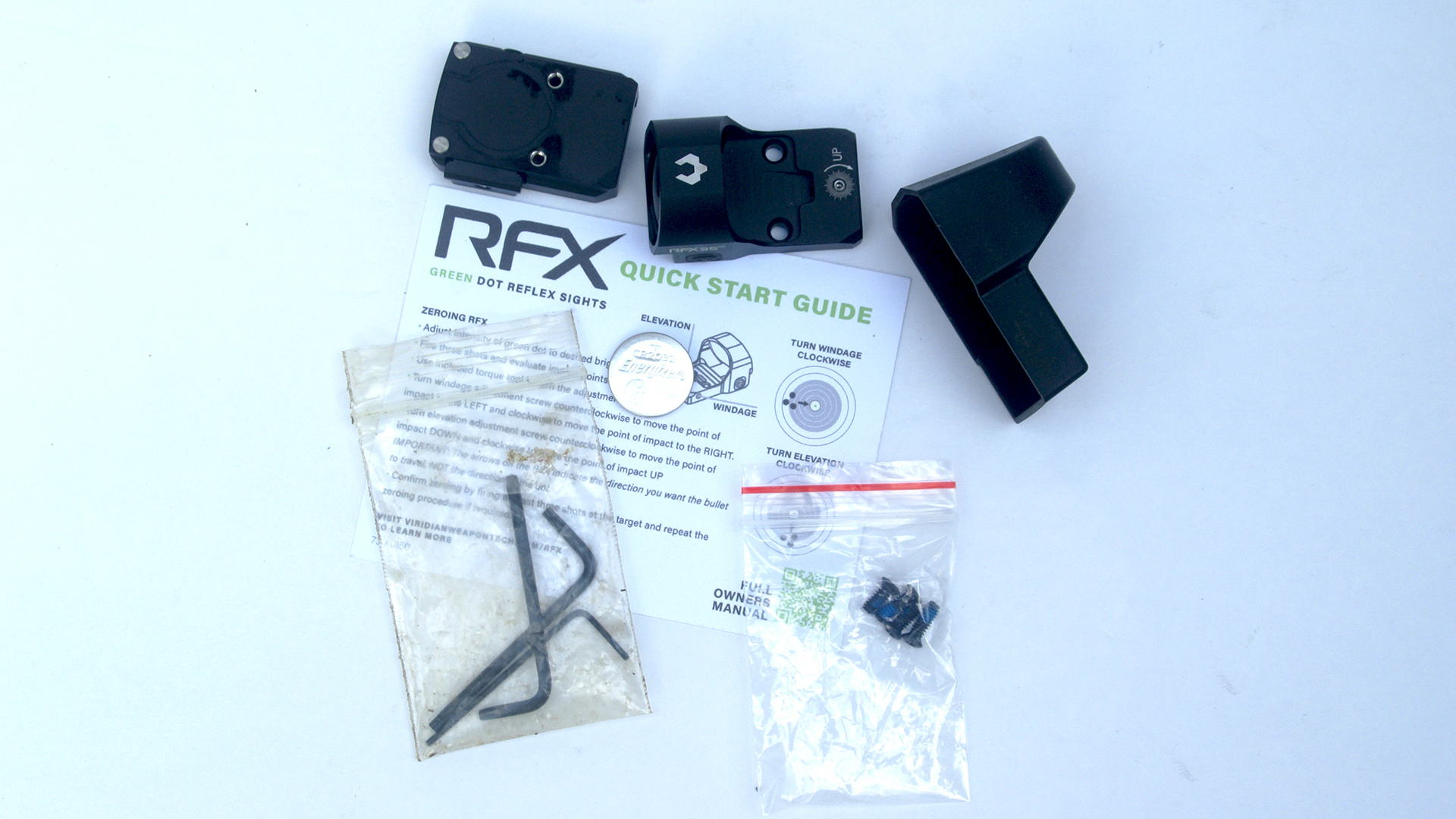 The RFX35 ships with the sight, Picatinny mount, appropriate wrenches and screws, a well-designed sight cover, 2032 battery and instruction sheet.

As is often the case when I bring a test item to my club match, there were several fellow competitive shooters who wanted a look. A couple of them have issues with red-dot optics. After running some rounds through the RFX35 green-dot optic, they all left with a smile.

Performance was flawless, operation is simple and the price is easy on the wallet. Additionally, purchase includes Viridian’s seven-year warranty. The RFX35 is a solid choice for an optic, especially for those who may have color spectrum vision issues.