Q. Can you identify my rifle? The only markings on it are “U.S. Derringer, Philadelphia 1826.” Any information would be appreciated.

A. You have a U.S. Model 1817 .54-cal. flintlock rifle that was altered to percussion cap ignition by the so-called “Belgian” method in the 1850s. This involved replacing the flint cock with a percussion hammer of the style and shape your photos show, removing the external frizzen, frizzen spring, and filling in the mounting screw holes for these parts. The flintlock brass pan was cut off close to the lockplate, and the hollow of the pan was filled with brass. All of these features—including the 1826 date—match details in my references for Derringer “Common Rifles.” 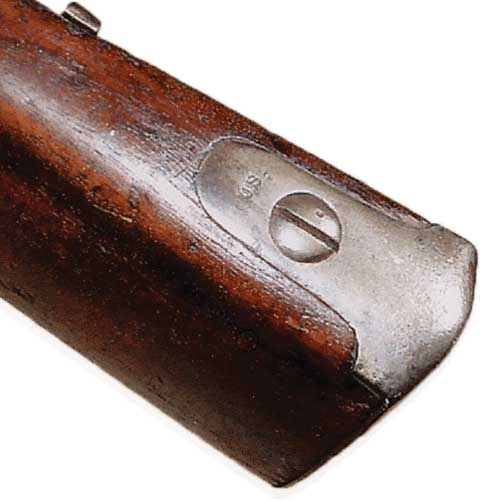 The clue that confirms my identification is the photo showing the “U.S.” on the butt tang. It also shows the top of the latch for the oval patchbox on the right side of the butt. That and the gently flared ramrod tip make me certain. Your other photographs cover up features that would have made identification easier.

Henry Derringer worked in Philadelphia, Pa., and had a contract to produce 400 U.S. Model 1817 “Common Rifles” of 1826 out of the 13,000 rifles he made between 1819 and 1846. The U.S. Model 1817 Rifles are described and illustrated in Flayderman’s Guide to Antique American Firearms 8th Edition. For a more detailed and better illustrated account, see American Military Shoulder Arms, Volume II, From the 1790s to the End of the Flintlock Period by George D. Moller.

To subscribe to the magazine, visit the NRA membership page here and select American Rifleman as your member magazine.