Those relying on an AR-15 for personal protection probably wonder what cartridge/load combination might be best for home defense. Though there are concerns of over-penetration regardless of the situation, inside a home there’s the worry of shooting through walls and hitting a family member or neighbor. Outside of the home, bystanders can often be easily seen. In a home, however, innocents become invisible concerns. I wanted to conduct a test that might shed some light on this and, working with a friend who is a SWAT officer, we came up with a plan.

As with any experiment, we needed guidelines. Regarding terminal performance, something along the lines of the FBI’s suggested 12 to 18 inches of penetration seemed practical. But, we needed to address over-penetration. Ideally the bullet should pass through a bad guy and a standard interior wall, but could then pose a serious threat to innocents on the other side. Additionally, in a home-defense setting it might be necessary to shoot through a standard interior wall to incapacitate a threat that might be using the wall for imagined cover. So, with some help from Clear Ballistics and the notion that 12 inches of this testing media would equate to an average human, we devised several tests. Note that none of the tests below are the actual FBI protocol, as Clear Ballistics is not the same as the FBI testing medium.

The available cartridges and loads to examine are endless, but we decided on two loads each for four cartridges. The .223 Rem./5.56 NATO was an obvious choice because it’s the most prevalent chambering in the AR-15. The .300 BLK was selected because it’s most likely the second-most popular AR-15 chambering. We also chose the 300 HAMR, a relatively new AR-15 cartridge often thought of as big-game-hunting cartridge. This is primarily because when introduced by Wilson Combat, hog hunting was the focus of its marketing. The cartridge was chosen because of the power/energy it brings to the table. We also included the .30-30 Win., because of coast-to-coast prevalence, and its long history of being a behind-the-kitchen-door rifle.

We selected two loads for each cartridge, hoping for one with shallow and one with deep penetration, while giving preference to loads often marketed or used for personal protection. Before any terminal-performance testing began, each load was fired over a chronograph to establish external ballistics. (See Table 1.)

Up front, let me say that no testing media is going to perfectly replicate a bullet’s terminal performance in a human threat, because humans are made up of a wide range of tissues to include cartilage and bone, and shot-placement variance will dictate those tissues a bullet must pass through. However, Clear Ballistics does provide a consistent media allowing for terminal-performance evaluation, while also providing bullet deformation and penetration results similar to what can be expected in living tissue.

Test One I No Barriers
Each load was fired into blocks of Clear Ballistics gelatin at 10 feet. The blocks were not covered with barriers such as cloth or clothing, because with rifle bullets it has no measurable impact on performance. There were no real surprises, and five of the eight loads tested delivered penetration within 12 to 18 inches. Of those five loads, the 150-grain .30-30 Win. load delivered the largest crush cavity. (To keep comparisons practical, crush cavities beyond 18 inches were not measured.)

Other performances of note include the 55-grain Tactical Ballistic Tip from Federal. It completely fragmented and left a massive wound cavity. The least spectacular performing load was the 190-grain, Subsonic SUB-X expanding load from Hornady. However, it was also the quietest, and noise can be a consideration when shooting in confined spaces. The 150-grain load for the 300 HAMR, which is loaded with a bonded Speer bullet, delivered the deepest penetration and the largest crush cavity. (See Table 2.)

Test Two I Over Penetration Interior Wall without 2×4
The idea here was to simulate an over-penetration situation where a bullet would strike a human threat—simulated by 12 inches of Clear Ballistics—and then strike a common interior wall constructed of two layers of half-inch drywall. A stud was not included, because with a standard spacing of one stud every 16 inches, chances of hitting one are less than 10 percent. The 55-grain Ballistic Tip load, 110-grain 300 HAMR load and the 125-grain .30-30 Win. load were not tested because they failed to surpass or just barely exceeded 12 inches of penetration in Test 1. The depth of penetration shown is the depth the bullet penetrated in Clear Ballistics after passing through 12 inches of Clear Ballistics and the interior-wall barrier.

Of note is that the interior wall did not tremendously degrade performance. Total penetration—penetration in the initial 12 inches of Clear Ballistics and the Clear Ballistics on the other side of the barrier—was, on average, only reduced by 7 percent. Average bullet expansion and weight retention varied by only 3 percent and 4 percent, respectively. Of the five loads subjected to this test, only the 150-grain 300 HAMR load showed over-penetration that would be considered excessive. It’s worth noting that had we chosen 15 or 18 inches of Clear Ballistics as the thickness of an average human, it would have altered the over-penetration numbers. And this test, like tests three and four, replicates a body standing directly adjacent to and behind the barrier partition. (See Table 3.)

Test Three I Over-Penetration Interior Wall with 2×4
The original intent of this test was to expose the same loads evaluated in Test Two to Test Three, with the only difference being the inclusion of a 2×4 stud in the interior wall. We, however, surmised that few if any of the loads could defeat the interior wall with a stud. Only the 150-grain 300 HAMR load penetrated deeper than 3 inches after passing through the unstudded interior wall, so that was the only load we tested. It punched through the 12 inches of Clear Ballistics, the interior with a stud, and still pushed 6 inches deep into another block of Clear Ballistics.

Surprisingly, with this load the addition of the stud only reduced total penetration by 5 percent and over-penetration by 25 percent. Though it’s only speculation, if the other loads showed a similar percentage of penetration reduction, none would have over-penetrated to a level of serious concern. (See Table 4.)

Test Four I Interior Wall with 2×4
Having established an interior wall with only two layers of drywall would have little effect on terminal performance, we omitted shooting through such a barrier to determine terminal performance beyond. Instead, we went right to an interior wall with two layers of drywall and a stud and were somewhat shocked by the results. Though recovered-bullet diameters were marginally reduced, except for the 55-grain Ballistic Tip load, these loads seemed to be essentially barrier blind. 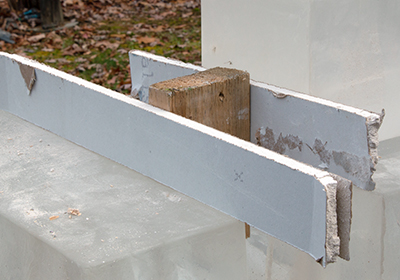 The most interesting test (Test 4) involved shooting through a studded wall and into Clear Ballistics. Most loads handled this very well, seeming almost barrier blind.

In Clear Ballistics alone, the 150-grain 300 HAMR load penetrated 21 inches and had a recovered bullet diameter of .65-inch. After passing through the interior wall with a 2×4, that same load still penetrated 21 inches of Clear Ballistics, but its recovered diameter was reduced to
.50-inch. And amazingly, the 55-grain Ballistic Tip bullet, though fully fragmented, created a 4-inch-deep wound cavity on the other side of the barrier. The lone failure, if you can call it a failure, was the subsonic .300 BLK load. It pushed through the barrier, penetrated 12 inches, did not expand and deviated off course by 6 inches.

Keep in mind, this test placed the Clear Ballistics blocks directly adjacent to the interior wall barrier. This would replicate a bad guy hiding behind an interior wall. It’s doubtful a space between the wall and the Clear Ballistics/bad guy would have made much difference in measured terminal performance, except possibly in the case of the 55-grain fragmented Ballistic Tip load and in the unusual situation next detailed.

This test produced an unusual result: After passing through the barrier wall, the 150-grain 300 HAMR load created sort of a knot in the block of Clear Ballistics at a depth of about 4 inches. Curious to see what this was all about, we cut into this knot and found a compacted, golf-ball-size collection of wood splinters and drywall. It appears that after passing through the barrier, the bullet created such a temporary cavity in the Clear Ballistics, this debris was sucked into it. With space between the wall and a threat, it’s doubtful this would have occurred. 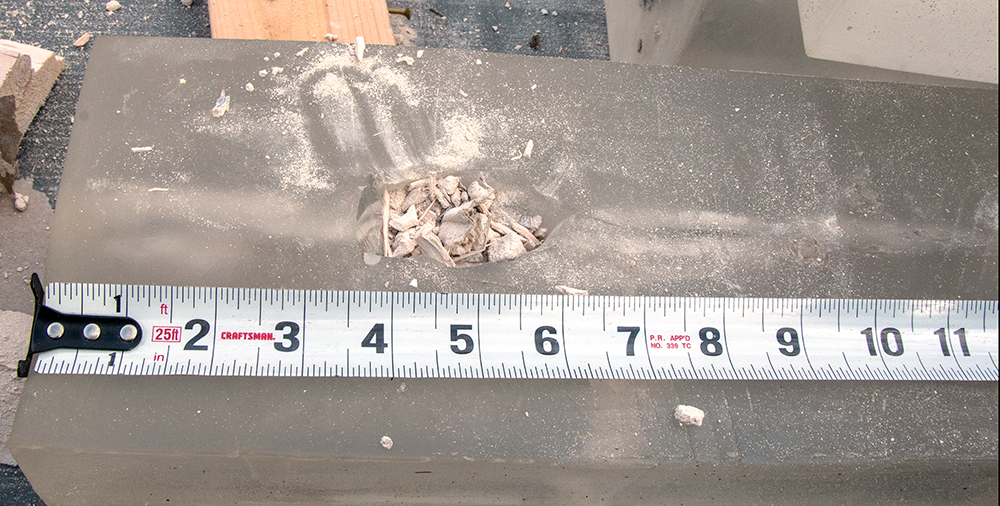 Summary
For us, the main takeaway is that if you have a bad guy hiding behind a common interior wall, concealment is all it’s really providing. With an AR-15 carbine, there’s a high probability your bullet will perform nearly as well after passing through that wall—even if it hits a stud—as it would if there was no barrier between you and that bad guy at all.

We also learned that the 150-grain 300 HAMR load is rather wicked with regard to terminal performance. Though it may provide deeper-than-desirable penetration in a home-defense setting, from a wound-cavity standpoint you can see why this cartridge is one of the best available for big-game hunting with an AR-15. And finally, do not discount the 125-grain hollowpoint .30-30 Win. load for personal protection. It should not over-penetrate, and it creates a reasonably large crush cavity. It’s clearly a great choice for home defense if your life-saving gun is a lever-action carbine.

If I had to pick one of these cartridges/loads for home defense, I’d probably go with the 110-grain 300 HAMR load because of its consistent 12 to 14 inches of penetration and the lack of over-penetration concern associated with it. The Speer Gold Dot load for the .223 Rem. and the FTX load for the .300 BLK delivered similar, but slightly deeper performance. There are, of course, lots of other loads and carbine cartridges to consider. This test is only a glimpse. But, it does give you an idea of what can be expected with carbines, and even the ancient .30-30 Win., if they must be fired inside a home to save your life.