Around this time of year in my part of the country, a lot of folks start thinking about elk hunting. Elk are big and pretty tough cervids, and a lot of guys believe they need more power than a .270 Win. or .30-‘06 Sprg. in order to kill one. That’s not really true, but beliefs are often immovable. Among the power folks, the .338 Winchester Magnum is a popular choice.

Like many—perhaps most—cartridges, the .338 Win. Mag. has a lineage. In other words, it was not drafted from scratch by some designer; it came from a parent cartridge. The .458 Win. Mag., which originated from shortening the .375 H&H Mag. and brought to market in 1956, is the parent of the .338 Win. Mag. When it was introduced in 1958, the .338 Win. Mag. was only chambered in the Winchester Model 70 Alaskan. Its designers envisioned it as a cartridge for large animals like elk and moose, along with larger bears. To that end, it was and remains an effective and successful cartridge. 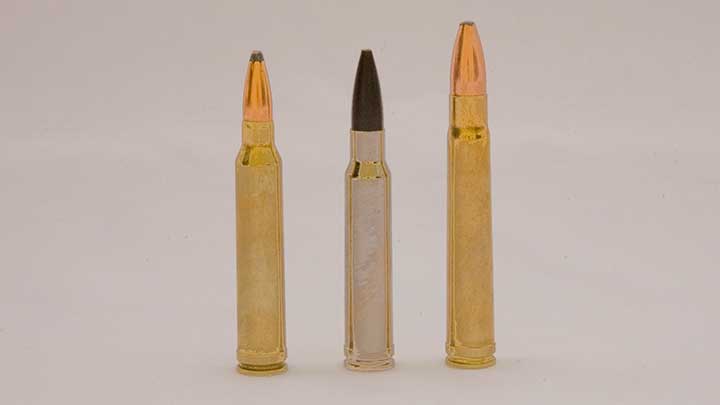 The .33 WCF enjoyed a fair amount of popularity as a deer, elk and black bear round in the thick woods, more or less replicating the ballistics of the rimless .35 Remington. Later in the 1940s Charlie O’Neil, Elmer Keith and Don Hopkins experimented with .333 bullets in a .30-’06 Sprg. case, developing the .333 OKH cartridge in 1945. It later morphed into the .338-’06, a somewhat popular wildcat cartridge. The .333 OKH was a marked improvement over the .33 WCF, providing about an additional 500 f.p.s. to the 200-gr. bullet and pretty much replicating the ballistics of the .348 Win. in a rimless cartridge.

This rim and rimless interchange is due to late 19th and early 20th century technology. Because most lever-action rifles needed a rim to both headspace as well as feed from predominantly tubular magazines, rimmed cartridges like the .33 WCF and .348 Win. were created. Bolt action rifles are better and more reliably fed by rimless cartridges from box magazines. The bolt guns are capable of withstanding higher pressures, hence higher velocities, than lever guns. 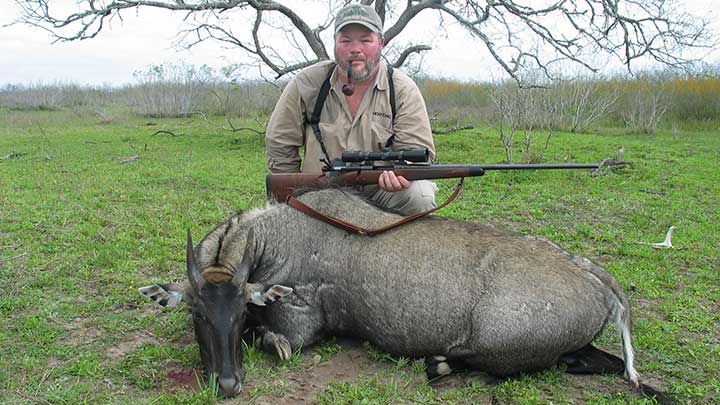 Fortunately, the bull stayed down long enough for me to make a correction with a finishing shot. A couple of weeks after that incident and after re-zeroing, I center-punched a woodland caribou at 350 yds. with the same rifle and load. That animal ran about 50 yds. before piling up. A few years later I put four 225-gr. Winchester FailSafes, a very hard and durable bullet, into the shoulder of a bull nilgai in a group you could cover with your hand, and it still took a couple of minutes before the animal collapsed. He didn’t go anywhere, but he took a lot of punishment.

The .338 Win. Mag. has been chambered in nearly any rifle intended for hunting. First, of course, was the aforementioned Model 70 Alaskan. Remington chambered the round in its Model 700 and still does. Its popularity is waning slightly as cartridges like the .338 Lapua have garnered shooters’ interest. In Alaska and the inter-mountain region, the .338 Win. Mag. remains a go-to cartridge for many who pursue large dangerous game.

As a plains-game rifle in Africa, the .338 Win. Mag. has a good reputation, but it lags behind the .375 H&H Magnum. Though it has plenty of power, far more than is necessary, there are quite a few pronghorn hunters who swear by the .338 Win. Mag.

For a 62-year-old cartridge, the .338 Win. Mag. has done pretty well. It never has benefited from being an American military cartridge, thus lacking cheap and readily available surplus ammo. Newer and more powerful upstarts post a mild threat to its market share. As a virtually exclusive sporting cartridge, it still remains a popular choice for those desiring more power. I doubt that the .338 Win. Mag. will be discarded anytime soon.