It would almost seem ridiculous to introduce a product that was at least 25 percent more expensive than any of the other products a company manufactures in the depths of the Great Depression, but that is exactly what Smith & Wesson did when it introduced the .357 Magnum in 1935. Smith & Wesson historian Roy Jinks said that the top brass at Smith & Wesson felt that this new custom-made revolver would not have a large demand, given its $60 price tag. They were wrong. As soon as it was introduced, demand outstripped the factory’s capability to satisfy it. Barely 120 revolvers per month were shipped, and the orders were way more than that.

Like most of the magnum cartridges, the .357 Mag. was concocted outside the factory by enthusiasts. In this case, it was the brainchild of Phil Sharpe, a ballistician, writer and member of NRA’s technical staff from the 1930s into the 1950s. He collaborated with then-Major Douglas B. Wesson, grandson of founder Daniel Wesson. Elmer Keith designed the first bullets for the cartridge when he developed 160- and 173-grain semiwadcutter (SWC) bullets for the .38 Special in the early 1930s. The heavy loads featuring these bullets over 13.5 grains of Hercules 2400 proved to be very accurate in the Smith & Wesson .38/44 N-frame revolvers of that time.

Smith & Wesson needed something to answer Colt’s .38 Super, a cartridge designed for the M1911 that launched a 147-grain full metal jacket with a flat point at 1,225 f.p.s. and 490 ft.-lbs. of slap, enough to penetrate the door of a speeding getaway car. The .38 Special and 9 mm Luger just were not up to that task. Sharpe and Wesson brought Winchester into the mix to develop a suitable revolver cartridge. Winchester added 0.125″ to the length of the case and ran the velocity of a 158-grain SWC to 1,525 f.p.s. in an 8.5″ barreled revolver. The load was very effective for hunting, and Wesson toured far and wide hunting everything from woodchucks to walrus with his .357 Mag. 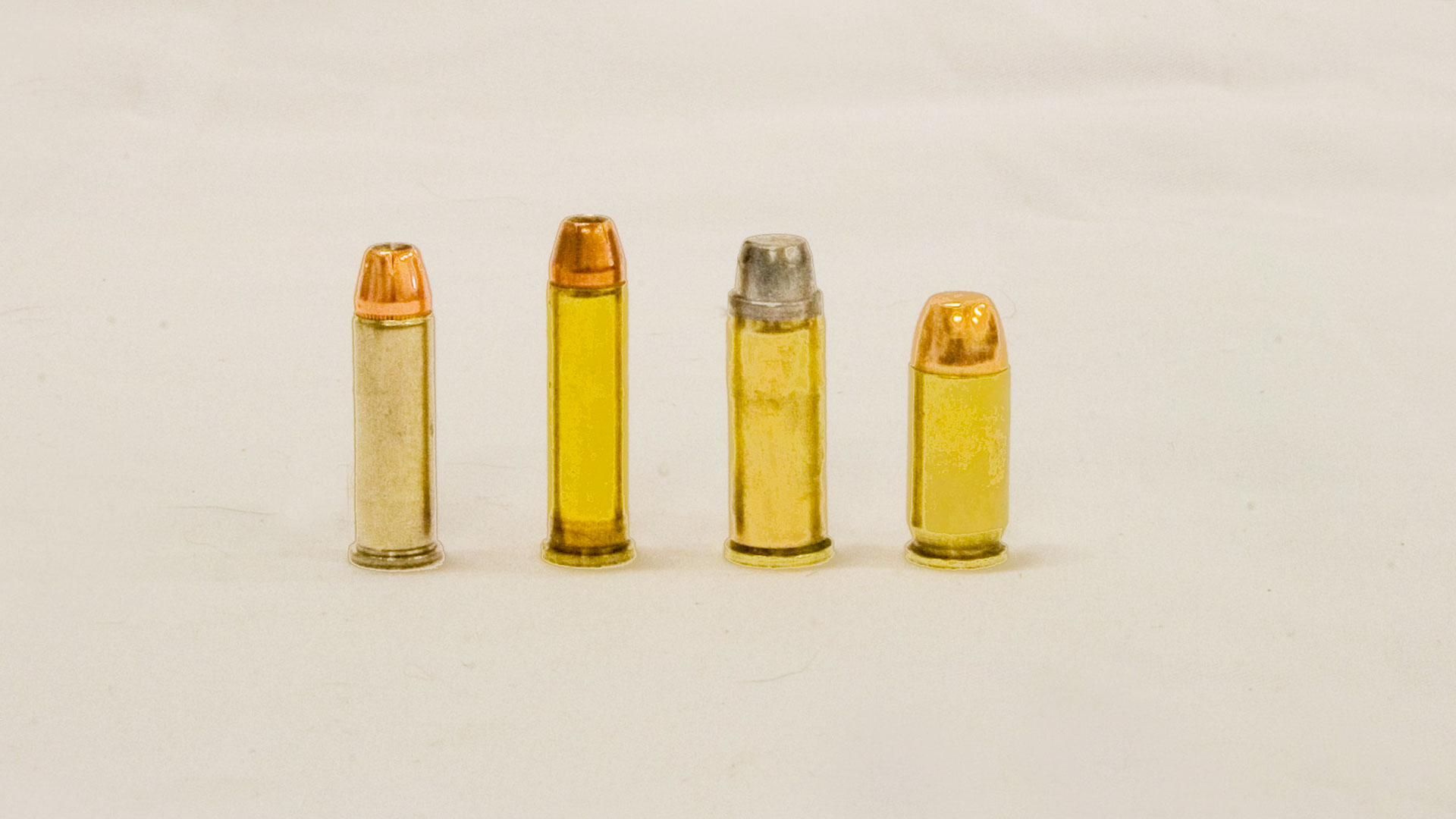 This load may be effective, but the revolver with such a long barrel was pretty unwieldy for the cop on the street. Smith & Wesson bobbed the barrels on its .357 Mag. to as short as 3.5″ for the law enforcement community. The 5″ and 6″ barrels were quite popular on the .357 Mag. until well into the 1960s, and even early ’70s. My 5″ Model 27—the model numbers came about in 1957—is a great balance of heft, sight radius and velocity. Though now in semi-retirement after some 40,000 rounds, it will still generate 1,280 f.p.s. with any good 158-grain bullet, and I have won a few impromptu matches with it.

The reviews of the .357 Mag. have been pretty consistent and positive over its 87-year life. Naturally, the experimenters have to play with bullet weights—everything from 90 to 200 grains, and perhaps beyond, have been tried. Flyweight 110-grain jacketed hollow points (JHP) churn up impressive velocities, like nearly 1,500 f.p.s. in a 6″ barrel, but typically have been a bit too fragile to maintain structural integrity and penetration. Hefty 180 and 190 grainers will plow through almost anything short of armor plate, but have trajectories like a rainbow. So, like most things, a compromise has been achieved.

For field use, I usually go with 158-grain SWCs in front of 14 grains of Alliant 2400 for 1,150 to 1,300 f.p.s. in my 4″ to 6″ barreled .357s. This is an excellent small game load, and I even dumped an 80-lb. feral pig with this load many years ago. Nowadays, when I carry a .357 Mag. it’s usually either a Model 342PD or a 2.5″ Model 66. I have had to recognize that bullet and powder technology has evolved since the Great Depression, and now carry Speer 135-grain Gold Dot Hollow Points SB (for short barrel) in them. This load has a great reputation as a fight stopper, and even I have to admit that it shoots as well or better than my own cast bullets. 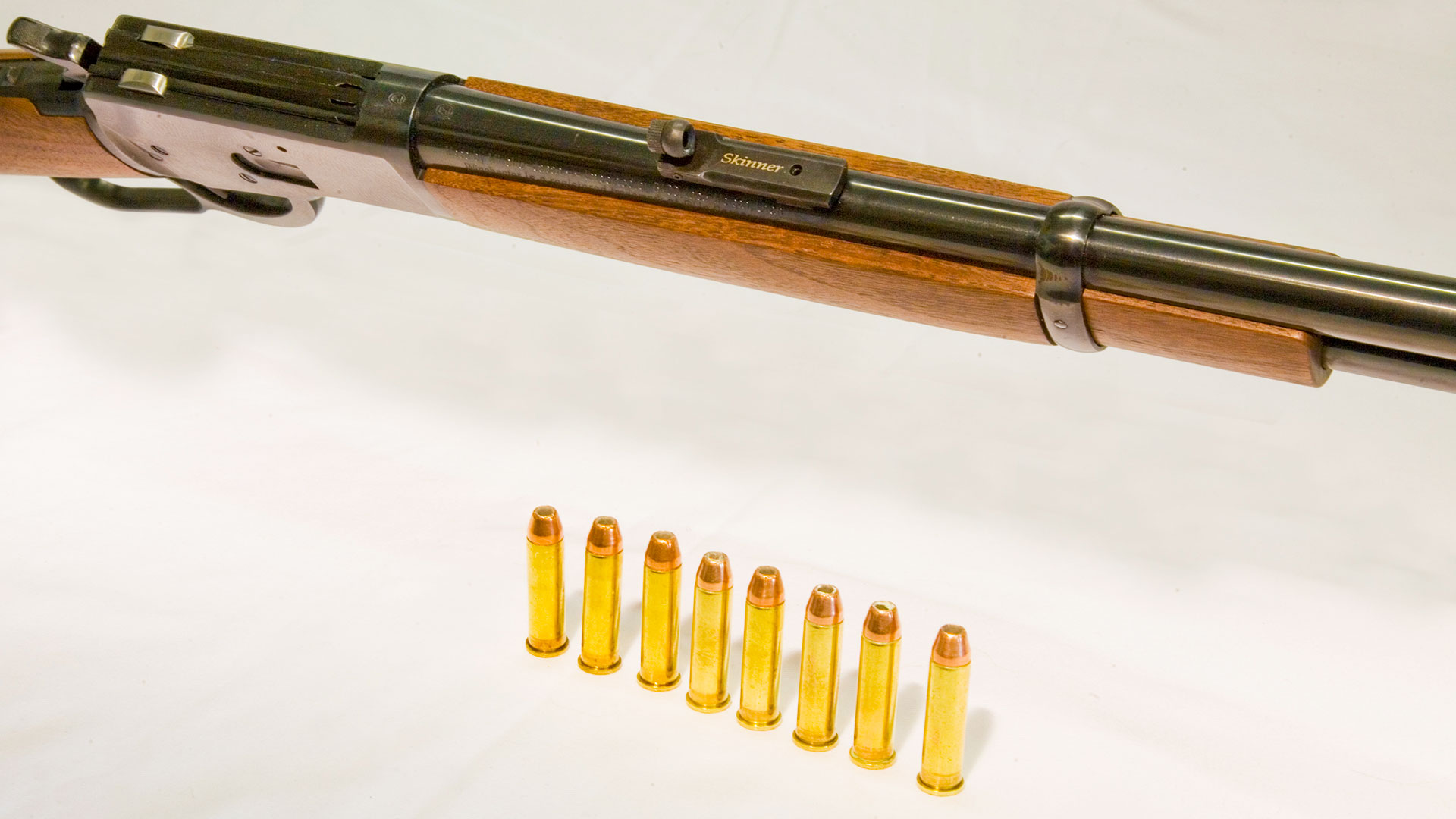 The popularity of the .357 Mag. remains as strong as ever. In a modern world of semi-automatic pistols with magazines that hold the better part of a box of cartridges, virtually every manufacturer of revolvers—either single or double action—makes a .357 Mag. Much of this is due to the versatility of both cartridges and revolvers. Most know that you can easily shoot .38 Spl. in a .357 Mag. chambered gun and still get all the accuracy inherent of that particular piece. Wadcutters are as easy on the hands as a rimfire—no small matter to those of us with some arthritis in our hands. Too, wadcutters are easier on the budget than full-house magnum loads. But when plenty of thump is needed, a shooter can load up some “T-Rex” loads as they are sometimes called, featuring heavy bullets, slow-burning powders and magnum primers to deal with outsized problems.

Smith & Wesson isn’t the only manufacturer of .357 Mag. firearms. Colt just reintroduced its iconic Python in this caliber. Ruger has been building some of the stoutest .357 Mag. revolvers ever since the 1950s. My Flat Top dating back to the 1950s is one of the most accurate .357s in my collection. Kimber has been making a very nice double-action revolver chambered in .357 for a few years now. Nighthawk is importing and customizing the superb Korth revolver. Taurus has a .357 Mag. to suit just about anyone’s fancy. You need not limit yourself to revolvers, as Winchester, Henry and a host of European and South American replica manufacturers make lever-action rifles chambered in .357 Mag. as well. My Winchester Model 92 shoots very well, especially since I replaced the factory rear buckhorn sight with a Skinner aperture rear sight.

The .357 Mag. has ensconced itself into the shooting brethren so well that it is about as common—necessary?—as the .22 LR. Most shooters have at least one, even if their current tastes have migrated to other chamberings. It is simply that universal—and well earned.